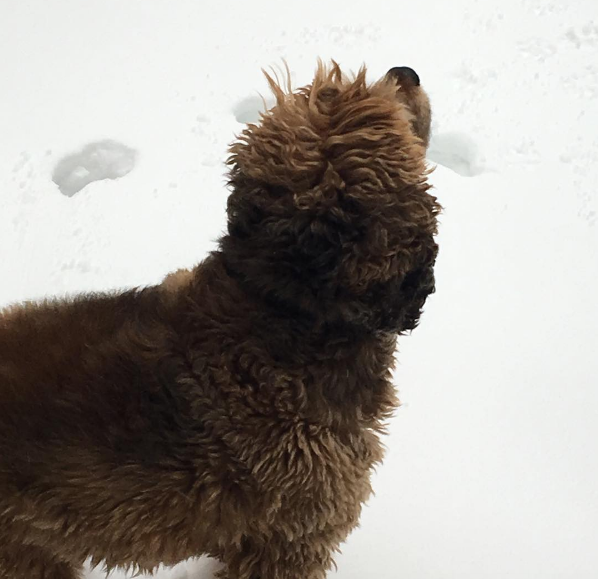 We were all expecting more snow yesterday, even Hurley. Photo: Kate Hooker via @BrooklynBased on Instagram

Back to the grind, everybody! One of the awesome conveniences of modern life is that for the majority of us who aren’t ER doctors or something, there’s no longer any need to brave angry sheets of falling ice to physically be in the office on a day like yesterday. The bummer side of this, though, is that the notion of a true snow day has gone completely out the window.

I personally logged something like 16 hours in front of my laptop yesterday, breaking only to walk my dog and to watch one eensy episode of Love on Netflix, the second season of which I’ve been inhaling. Today I feel more burnt out than I would have if I’d just had a normal day yesterday that included a subway commute, lunch with a friend and a stop at the gym, and I’m moving at a glacial pace. Gotta find some espresso somewhere though, maybe at the Coffee and Tea Festival happening in Greenpoint this weekend, because this Ideal Week is action-packed and I don’t have time to dawdle.

First of all, I have to fill out three different brackets for various March Madness pools before noon tomorrow, and I know less about the field this season than I ever have (although I did have the amazing opportunity to watch my beloved Blue Devils win the ACC championship IN BROOKLYN (!) last weekend, complete with NC-appropriate ad signage at the Barclays). I also need to make St. Patrick’s Day plans which, depending on my end-of-the-week mental state, will either mean hightailing it out of the city, or finding a way to get into the center of the action.

And then of course we’re hosting one of our favorite events of the year, Wedding Crashers, on Sunday at The Green Building and 501 Union from 11:30 am on. This year, we’ve got more than 70 of New York’s best wedding vendors and seven bands performing, so there’s a lot to see and take in if you’re planning on stopping by.

In other news, Greenpoint Fish & Lobster Co. is hosting a five-course prix fixe Italian dinner tonight for $45 if you ate every scrap of the food you had at home yesterday, and Eugene Mirman has announced a live recording of his Hold On podcast featuring guests David Cross and Jon Benjamin at The Bell House on Saturday, April 8. This will for sure sell out so you should pick up a $20 ticket for yourself pronto. Otherwise, take a gander at our suggestions to help you maximize your fun quotient in the Ideal Week ahead. 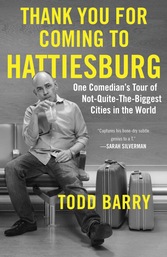 If you’ve never had the chance to see Todd Barry do standup live, you are missing out on a true NYC institution–no one nails the super dry, sarcastic tone you’d expect from someone who’s been in the game here for a few decades quite like he does. On Thursday night, Barry is appearing at The Bell House with a couple of pals like John Hodgman and Janeane Garofalo to celebrate the release of his new book, Thank You for Coming to Hattiesburg: One Comedian’s Tour of Not-Quite-The-Biggest-Cities In the World. Tickets are $25 each and the show starts at 8pm. Meanwhile, across town in Greenpoint, Diamond Bar is serving up the world’s most delicious food (it’s official, I’m sure of it)–Korean fried chicken–from 6:30-9:30pm as part of its International Pop-up Dinner Series.

Friday is Saint Patrick’s Day, which means that you should focus every shred of energy you’ve got into avoiding Murray Hill/East Village/LES from the minute you arise until you pack it in for the night. One way to put some distance between yourself and the drunken screaming masses is to a duck into a movie, and as luck would have it, Nitehawk Cinema has a special midnight screening of a holiday-appropriate movie that I can’t believe I’ve never heard of and want to see STAT: Lephrechaun in the Hood, a 2000 hip-hop thriller involving an evil leprechaun, starring Ice-T. Come on, this sounds awesome, right?! Tickets are $12. The 12:10am start time puts this early on Friday morning, but you could also watch it on Amazon ($2.99 rental, trust me, you don’t need HD for this one) at home with the delicious snack of your choice and no chance of being barfed on by a stranger.

At press time, the forecast for Saturday looks cold and rainy, which only makes Winter’s Grind at the Arrogant Swine, a daylong party at the East Williamsburg BBQ mecca featuring all-you-can-eat sausages and all-you-can-drink locally-produced craft beer, all the more appealing. For $45 per person, you get unlimited jerk chicken sausage, Ecuadorian morcilla, Sicilian lamb stigghiola, and more, plus March-friendly beers from the likes of Finback, Other Half, Strong Rope, Grimm, Barrier, Gun Hill, and many others. The festivities kick off at 1pm and tickets can be snatched up here. If you’re still standing at 10pm, you can head over to National Sawdust for the first anniversary of The Revolution performance series, which showcases Brooklyn and Harlem based musicians. To celebrate a successful first year of the series, six previous participants will return with live musical performances guaranteed to impress and Braven Brewery will be offering $4 beers all night. Tickets are just $15 if you buy them in advance.

If you can’t make it to the sausage fest at Arrogant Swine on Saturday, or if you have fully recovered from the sweats by Sunday, Brooklyn Bazaar is hosting the annual Brooklyn Meatball Takedown at 2pm. A $20 ticket means you get to try all the meatballs worthy of being entered into the competition for the title Best Meatball in Brooklyn and cast your vote for the winner. For a slightly less conventional experience, why not hit up the Blood Brunch at Spectacle Theater, which doesn’t involve food at all but instead a matinee of a mystery horror movie from the 60s, 70s, 80s, or 90s. Tickets are $5 and the screening starts at 3pm. 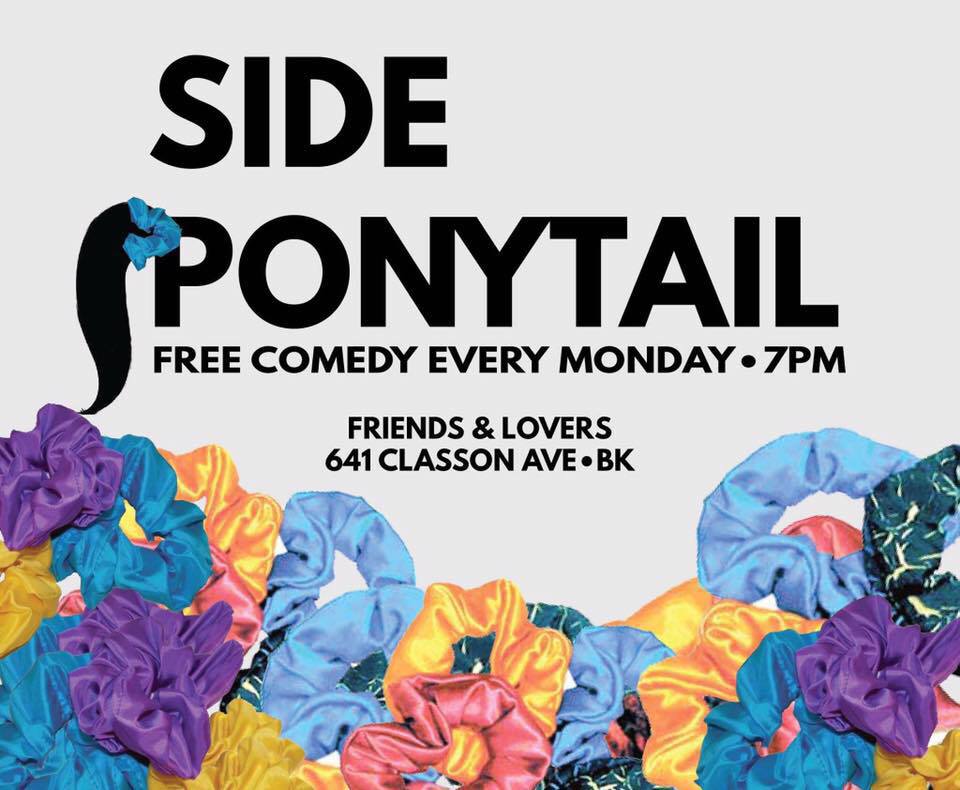 On Monday, head over to Friends and Lovers in Crown Heights for a special podcaster-centric Side Ponytail comedy show at 7pm. Emily Winter will emcee a standup lineup featuring acts like Ophira Eisenberg from Ask Me Another, Tim Barnes, of It’s All True! Podcast and MOTH Storyslam, Sydnee Washington from The UnOfficial Expert Podcast, and Dava Krause of The Fantasy Suite Podcast. The best part about this particular show is that it is totally free, which means you’ll have cash left to treat yourself to a few beginning-of-the-week drinks.

I know I’m not alone in having been heavily influenced by Howard Zinn’s groundbreaking A People’s History of the United States when I read it as a naive and impressionable youngster. Sadly, recent events have imbued Zinn’s work with a new level importance, as it seems that certain people are even less inclined to recognize the contributions and sacrifices of women, immigrants, minorities, laborers, and other marginalized groups who have been making America great since the beginning of time than they were in Zinn’s day. On Tuesday night, BAM is hosting a special event called The People Speak, which is based on Zinn’s research and writing and features readings and performances by names like Maggie Gyllenhaal, Marisa Tomei, Talib Kweli, Frances McDormand, Aasif Mandvi, and Peter Sarsgaard. Come be inspired to carry on the fight for social justice–tickets are just $20 and the show starts at 7:30pm.

On Monday, you can hone your chopping, slicing, and dicing abilities at a free Basic Knife Skill class at 61 Local from 7-8:30pm, or you can take a more passive approach and be served a selection of desserts and tea at a multicourse pairing event at Patisserie Tomoko in Williamsburg. Tickets are $40 each, and you can select a 6pm, 7pm, or 8pm timeslot.