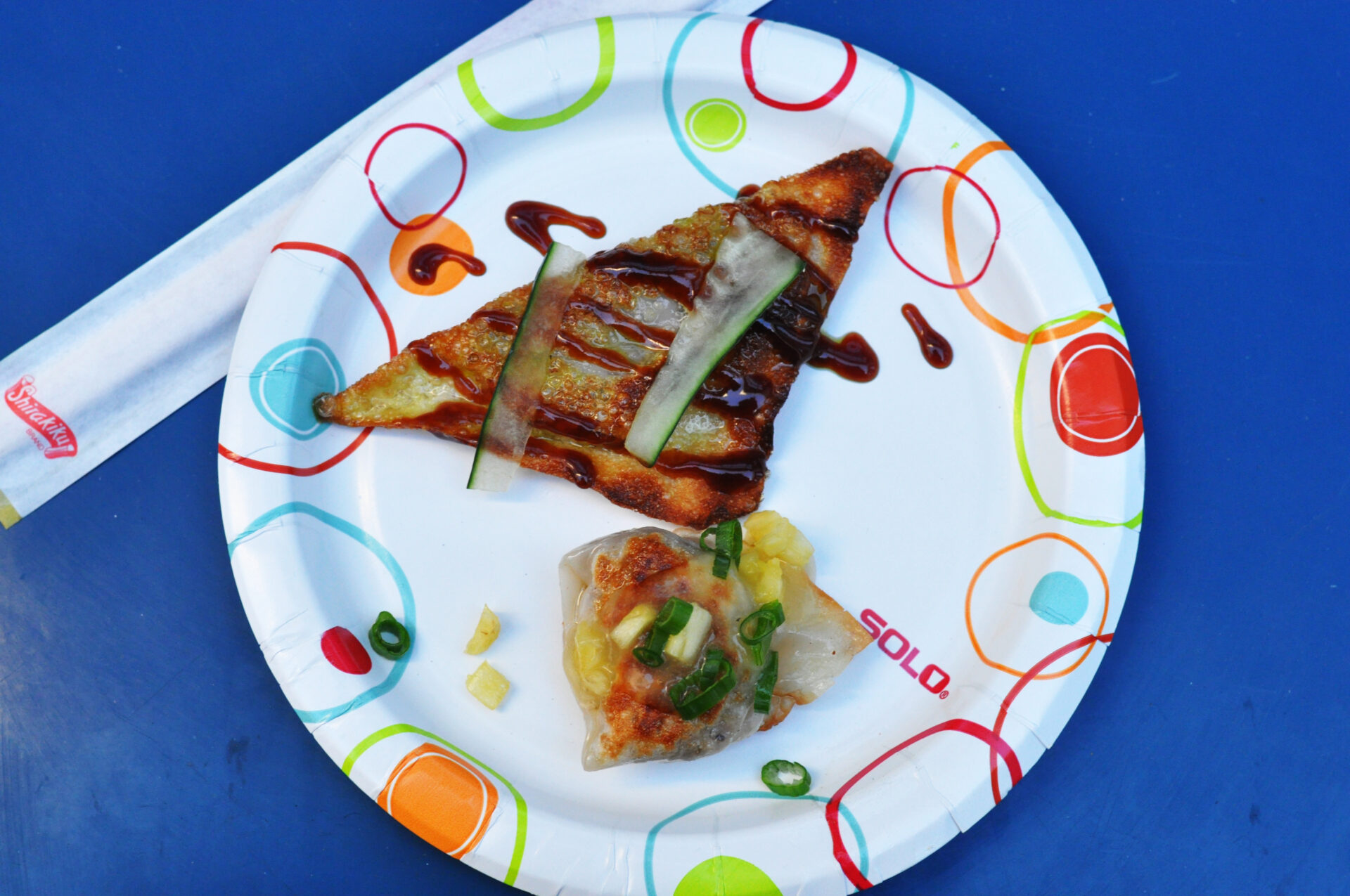 Note: Read our What to eat at Smorgasburg 2018 guide here.

For those of us who admit to being more than a little food-focused (or slightly gluttonous, whichever), this was a much-anticipated weekend, and we’re very lucky that Smorgasburg isn’t picky about the weather. The lauded food market returned to East River State Park and took up residence in Prospect Park this weekend, despite a somewhat chilly and grey start on Saturday. This year, the market opens with a decent shaking up to its usual program–from mom-and-pop shops cooking up traditional Haitian food to Chinese dumplings with eclectic fillings inspired by the diversity of Queens. Below we’ve highlighted a couple of vendors to look out for, so ready your utensils! (And yes, there’s a spaghetti donut. We tried it. It’s fine.) 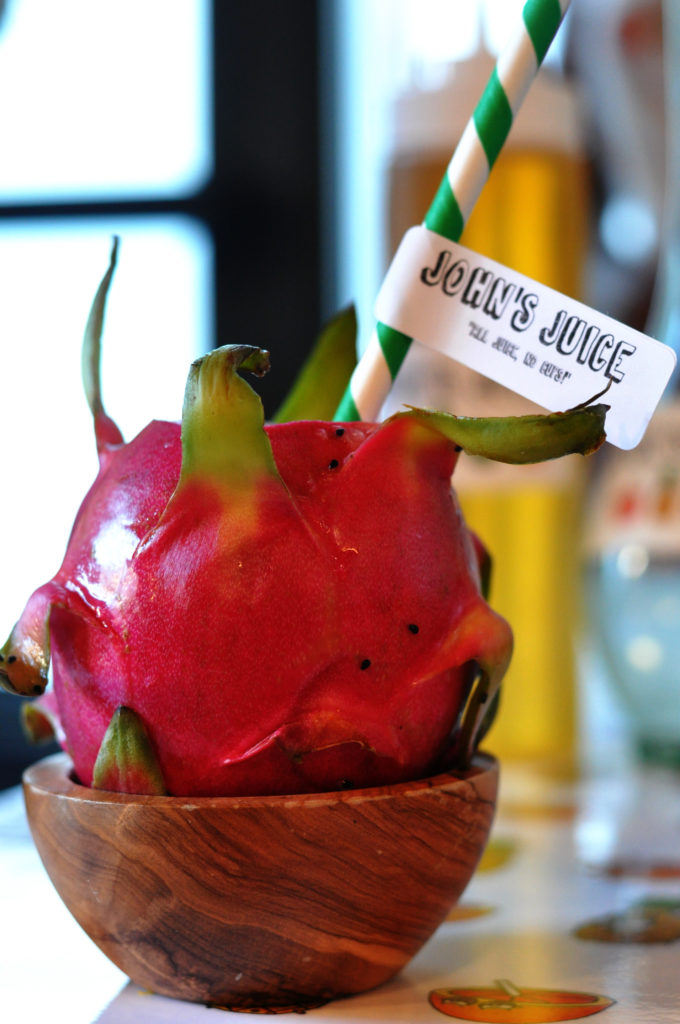 Ok, so you’re totally over walking around Smorgasburg sipping coconut water from a coconut–but how about slurping fresh juice straight from a dragon fruit? Or a pineapple? John DeWindt and his partner August Major take fresh fruit juice to a whole new level using a nifty machine they spotted and picked up in Japan. It grinds the juice inside the fruit, so all you have to do is mix in a little agave, ginger, or seltzer, stick in a straw, and you’re done! It’s a pretty flawless summer treat. 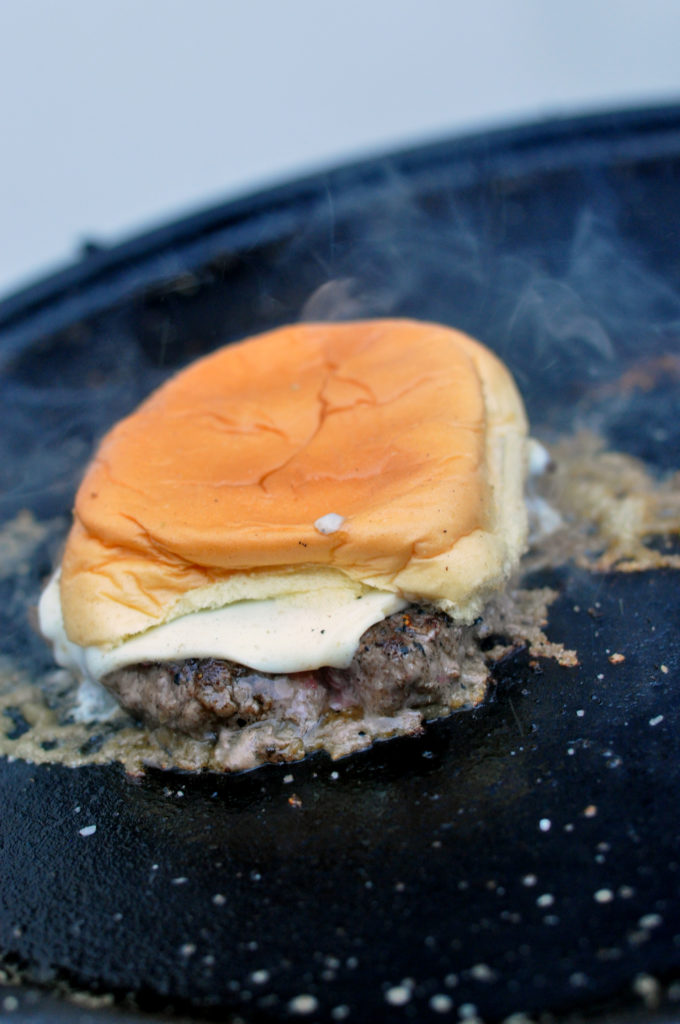 The only thing better than a sizzling piece of meat on a grill is if that meat is sizzling in aromatic pickle juice water. Mark, the man behind Burger Supreme, keeps his classic burgers simple, but seriously delectable. Sometimes a juicy burger patty nestled in between a Martin’s potato roll, slathered in mustard, and wrapped in gold foil is all you really need out of life, or at least out of a summer afternoon. 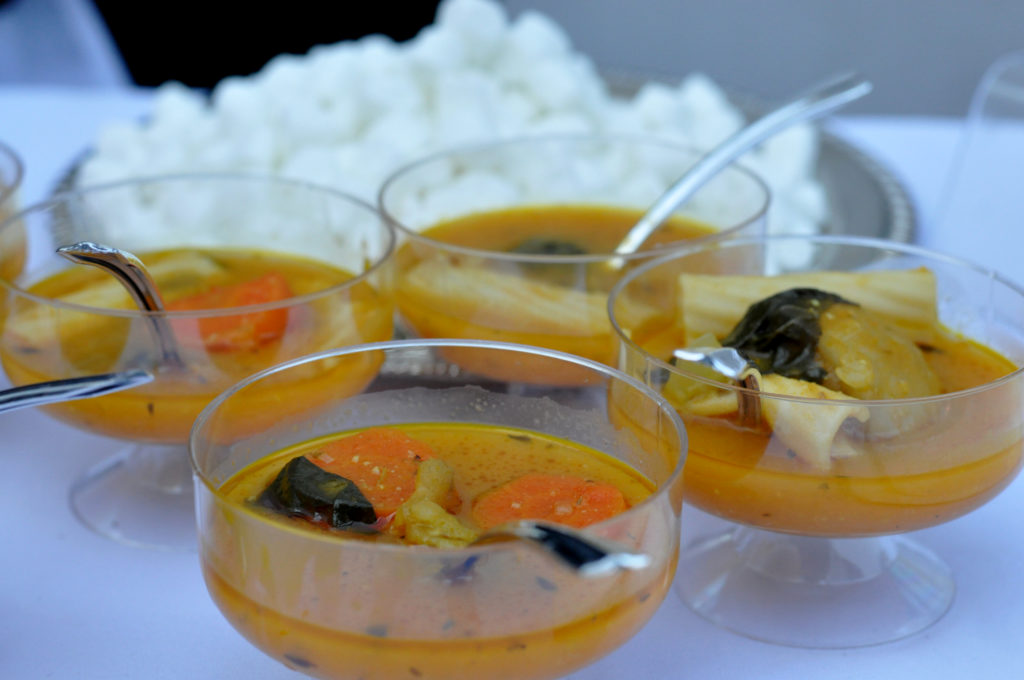 One of the best ways to expand your palate at Smorgasburg is to taste Rose Michel’s luscious Haitian cooking. In what’s considered a traditional Sunday brunch, Rose cooks up a Freedom Soup (pumpkin soup filled with carrots, spinach, and rigatoni), paired with black mushroom rice, spicy cabbage, and deep-fried pork belly. 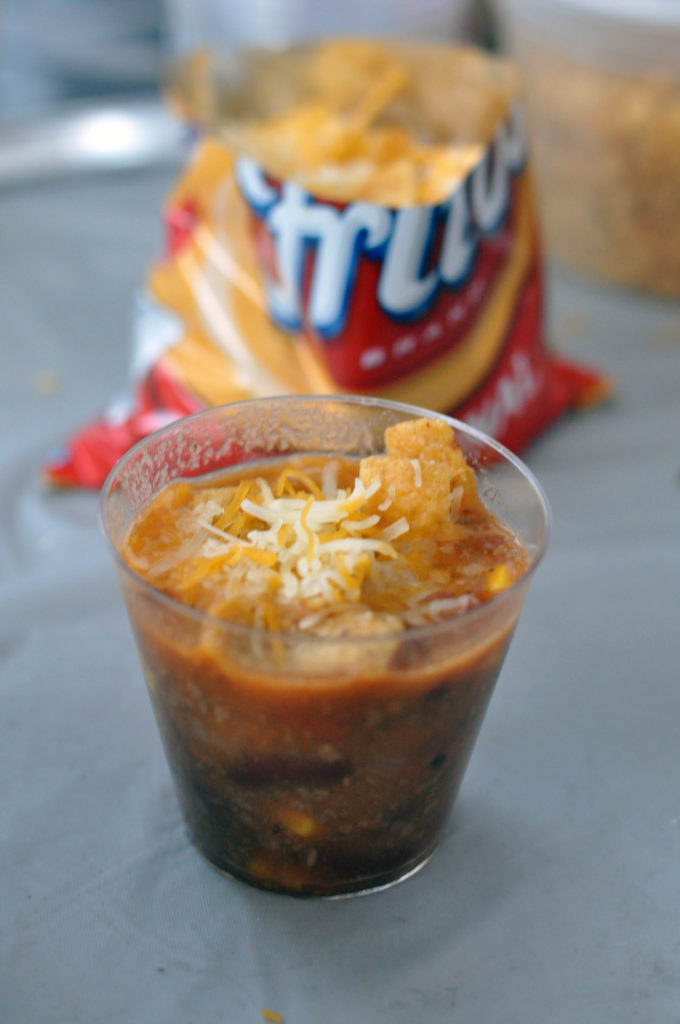 This Smorgasburg vendor is probably the one most worth reading about before you go. From frito pies to curried ramen sans broth, Commissary Kitchen serves up foods from Albert Johnson’s (Prodigy from the hip-hop duo Mobb Deep) prison cookbook. The Buffalo Birdhaus Bao–fried chicken glazed in a homemade buffalo sauce and sprinkled with crushed Cool Ranch Doritos on a bao bun–is a must-try. Seriously. 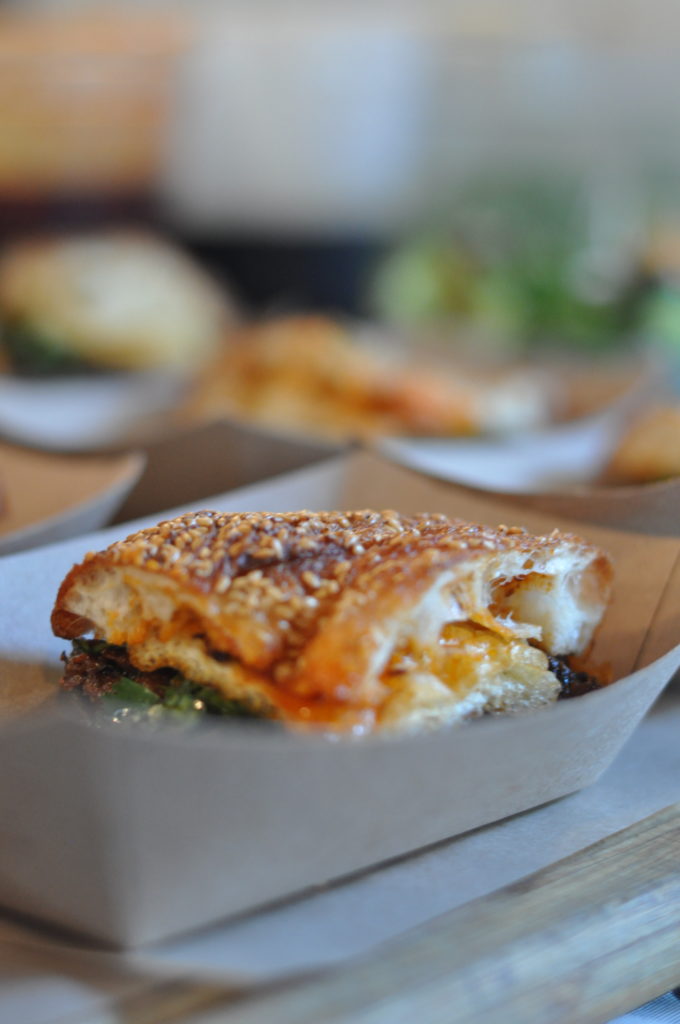 Speaking of must-trys, the Strange Flavor team’s Sichuan-inspired sandwich features brisket, cilantro, scallion, and a tofu puff pressed gently between a perfectly-fried sesame seed bun. Not only is the combination of flavors a serious treat for the taste buds, but this sandwich also makes you want to delicately place a tofu puff on, well, everything. 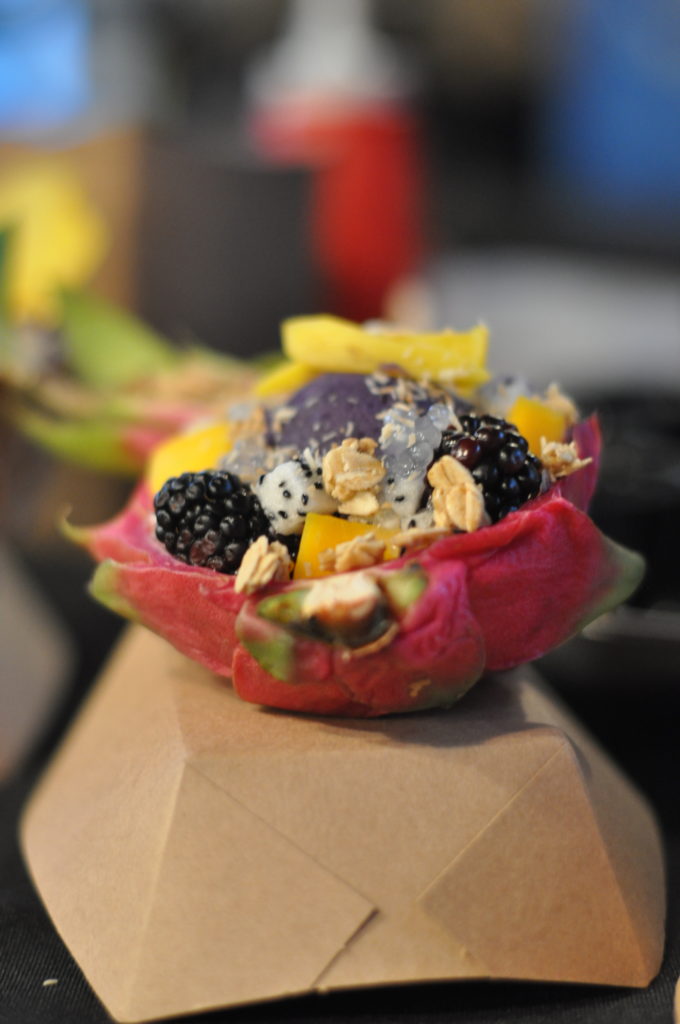 Earlier, we mentioned that you can drink straight out of a dragon fruit at Smorgasburg this year. Thanks to Ube Kitchen you can eat out of one as well! What will you eat? Oh, just a near heavenly combination of mango, dragon fruit, jackfruit, tapioca pearls, red mung beans, and fresh coconut flakes all topping a scoop of ube ice cream. For healthier eaters–or really, anyone who loves incredible food–Ube provides Philippine-inspired grab-and-go bites that are mostly made from plant-based ingredients. Plus, they’re basically works of art. 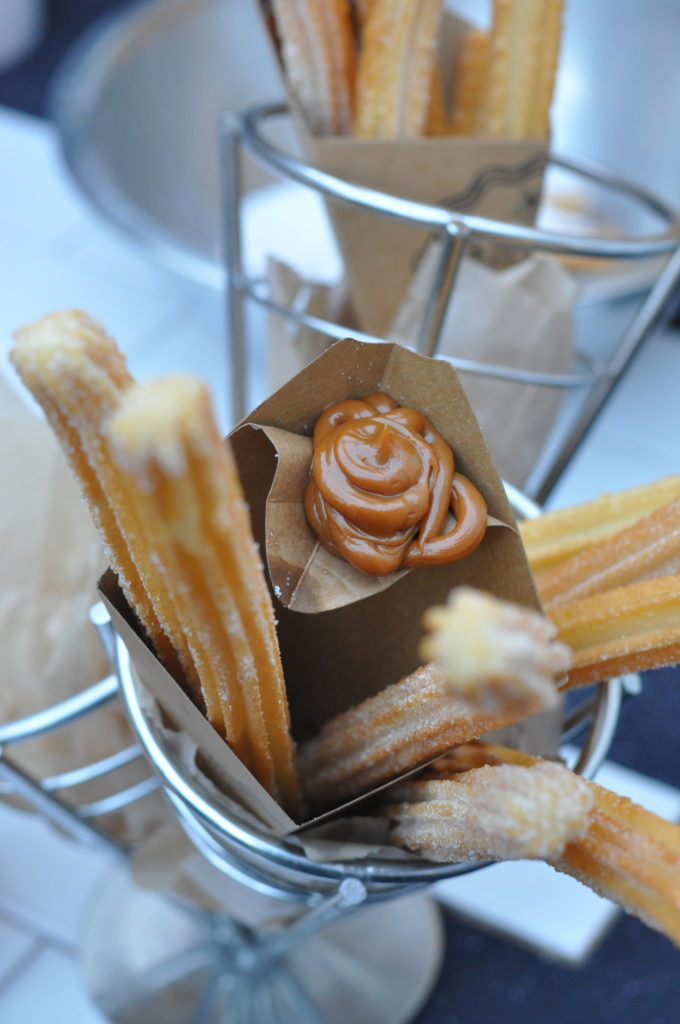 Stuffed to the brim, you’ll likely try, but not likely succeed, at sneaking out of Smorgasburg without gorging on a churro. Crisp, warm, and sinfully sweet, Dulcinea Churros come with dipping sauces like dulche de leche, Nutella, and an inspired strawberry peppercorn. The Dulcinea team has also taken the iconic Spanish confection and swirled it into a petite donut sandwich stuffed with peanut butter ice cream. If a blissful churro coma is what you seek, look no further.