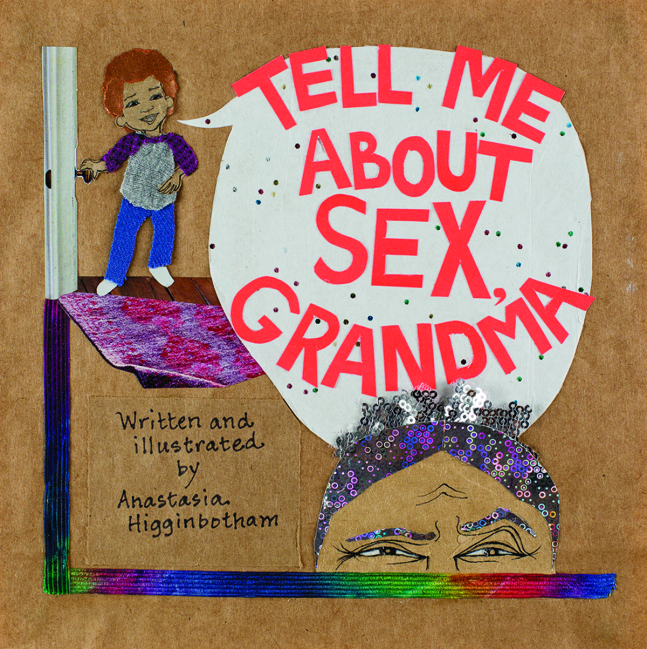 As a clinical social worker who has led groups with and taught sex ed to Middle Schoolers for over 10 years, I’ve seen kids wrestle with feelings of badness or worry about their sexuality. My goal is always to normalize their feelings, provide support, and clarify misinformation.

So it was a joy to read Anastasia Higginbotham’s third book in her Ordinary, Terrible Things series, Tell Me About Sex, Grandma (it follows her similarly funny titles, Divorce is the Worst and Death is Stupid). Written and gorgeously illustrated with collages that Higginbotham makes from paper, fabric, and ribbons, her book observes a conversation between a child and the child’s grandmother that addresses sex, sexuality, boundaries and consent. The child’s gender has intentionally been left undefined, so as to encourage any child reading it to connect easily to the main character and to the material. Tell Me About Sex, Grandma is less of a ‘how are babies made’ manual and more about conveying the message that your body and sexuality are precious and special, and nobody ever has the right to make you do something sexually that you don’t want to.

I had the opportunity to ask Higginbotham some questions about her process and her goals with this book in advance of her book launch this Saturday, April 8th, from 4-6pm at Books of Wonder in Manhattan, where we’ll both be continuing the conversation.

How long does it take you to create these books?

Decades! Feels like each one took about 30 years since I’ve been trying to make sense of this stuff since childhood. Each book in the series represents a life’s work of trying to understand and accept things like my parents’ divorce, my grandparents’ funerals, the long-term effects of sexual abuse. Once I have a vision for a book and some of the words start to come, it takes about a year. Once I start illustrating, I make a gigantic, unbelievable mess. Every surface of my workspace is covered. There are piles and scraps everywhere. I am always still taking care of my children and working though and can’t really disappear for more than two or three days at a time, even while I have a great partner. But he works and makes art too. I’m still very much in life while I’m making a book. The time I get to be alone with it is luxurious.

What was the process like for this one in particular?

I was surprised sometimes while I was making it. On the page where the narrator says: “It is never okay for an adult to choose to have sex with a child—even if they love you and take care of you,” I was super adrenalized just printing the words. These were words I had already written and reviewed and revised plenty of times in the script. But when I was putting them onto the page for the actual book, my heart was beating really hard and my face got hot and it was hard to keep my hand steady. So much was behind it. Anger mostly, but also fear. Like, am I really going to say this in a children’s book? Are you allowed to say this in a children’s book? And then on the next page when Grandma lays down the law and says: “No sex unless everyone says they want to and no sex with kids, ever,” it was kind of hard to breathe when I wrote that. I felt like they were all in the room with me, all the kids who have been tricked and misused in this way, all the people who have been forced into sex, or sex was taken from them without their permission, and all the ones who this will still happen to. It’s like I was trying to hold them all, speak for them and assure them: I know who is to blame for this and I promise to hold them accountable and make them stop. I was trying to very calmly channel that energy through the pen. Neatly. And carefully. Without screaming.

What has been the best thing about writing and publishing Tell Me About Sex, Grandma?

I love being able to give this book to an adult and feel confident that it won’t hurt them; it may even help to heal them. I also love to think of a young child growing up with this book telling them over and over, as many times as they read it, that their sexuality is a treasure, that it’s theirs alone, theirs to discover, theirs to share if they choose. I’m casting a spell. That’s what I want for them so I’m saying: it is so. And there’s a good chance they will believe me and their families may affirm that as well and then the kid will grow up just knowing it. They’ll know it like they know their own name. Like, of course it’s mine! And if that happens, there’s a strong chance they will treasure it and find others who do too, and they’ll bring that reverence to everyone they meet. That’s thrilling to consider.

Is there a question you wish you were asked when being interviewed about the book?

I want to say why there’s a framed picture of Mary and the baby Jesus on the wall above Grandma’s head when the child bursts in with their question. I put Mary there so that the fear of God is in the room—any god and every god. I wanted religion there looming over the child’s question and I wanted us to not know by looking at Grandma’s face whether she will be on our side or not. Like, Oh no, she’s Catholic! Is she gonna say it’s evil? That we’re evil? That sex is only for marriage and procreation? That it’s only between a woman and a man? Since Grandma says the total opposite of that, Mary is there to give her blessing on the child’s sexuality too, as a goddess and as the mother of a god and as the one who Grandma prays to. Mary is definitely on our side.