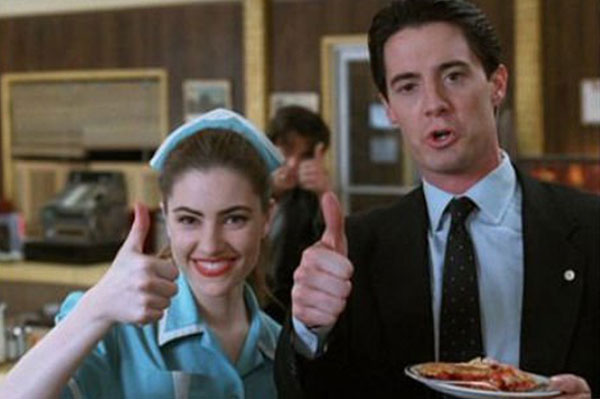 Before there was a shitty Warrant song called “Cherry Pie” there was Twin Peaks, but literally just by a few months, April 8, 1990 was the first air date of Twin Peaks. “Cherry Pie” was released in September of 1990. I never owned the Warrant cassette tape, but I did watch Twin Peaks. I had two jobs and was in high school, so Friday was my night off. I used to buy a six pack of beer and stay home on Fridays to watch it. Cheers was the most watched show at the time, so nothing could be as far away as Twin Peaks, geographically, thematically and visually. I still remember how freaked out I was when Bob appeared and crawled over the sofa, at the screen, at me. David Lynch’s strange dream translated so well to television.

In 2001 I lived in Portland, Oregon, a short-lived west coast experiment. Two things happened there that impressed me. I understood Twin Peaks, set and filmed in Washington State, and the film River’s Edge, set and filmed in Northern California, more deeply. The infinite importance of location, that Northwest isolation and mist, revealed itself.

I also taught myself how to make pies. Because I had time on my hands, and hell, if Twin Peaks and River’s Edge taught me anything it was that idle hands were the devil’s playthings.

So I taught myself to bake. I’d bake a few pies a day and give them away, because stoners love pies just as much as FBI Agent Dale Cooper does. Or did. Can you love pie while stuck in some evil limbo? We’ll find out this weekend when season three finally reveals its secrets. Bake a pie.

Cherries are great, rich in flavor and texture, they can stand up to some flavor. If you see sour cherries, pick them up, they are fantastic for baking.

This recipe is for a standard 9-inch pie plate. Pies take a few hours to make, but that’s a lot of baking time, not active time. You can make the crust days or weeks ahead.

Add half of the strained ice water to the mixture. Stir it with a fork to incorporate in, just 3 or 4 turns around the bowl. Flip the dry ingredients on the bottom to the top and scatter the rest of the water over the crust. Give the mix a few turns with the fork so the water gets absorbed.

Flour your board lightly and pour the crust on it. Make sure it’s all in a pile together. It doesn’t look like much now. Take the heel of your palm and push it across the crust. You are smearing and stretching the fat through the crust, and making it more cohesive in the process. Take a bench scraper after every time and push the crust together. This technique is called fraisage, and it makes your crust flaky without using too much liquid. You’ll do it a few times, probably about 5, to smear the fat through the crust and make it something you can really work with.

Bring the crust together in two balls and press flat. Wrap in plastic and chill for at least an hour. You can keep it in the refrigerator for a few days, or freeze is and pull it out the night before you want to use it to thaw in the fridge.

Preheat oven to 425 degrees. Toss a baking sheet in there if you have one.

Pit the cherries. I just stem them all at the same time and then pinch them between my thumb and index finger over a bowl so it catches all the juices and the pit pops into my other hand. Whenever you have a tedious task just focus and barrel through it. This is the worst part. Go through again and make sure you got all the pits. Nobody wants to bite down on that. Toss with the sugar, citrus juice and zest, nutmeg and salt. Finish with the thickener.

Roll out your chilled bottom crust to about 1/8” thick. Fold in half and quickly place in the pie plate and fold out. Make sure the crust is flush with the pie plate. There will be some crust overhang. Chill this while you roll out your top crust. This is a great time for a lattice, the fruit pie wants more surface area to reduce the juices and the contrast of the cherries versus the crust is pretty. Roll your top crust out, it can be a little smaller than the bottom one. [There’s a real internet trend of making these with a zigzag, Black Lodge floor pattern lattice, but if you really want to nerd out, just go double crust, cuz that’s how the Double R Diner made their cherry pies on the show. –Ed]

Take a knife or a pizza cutter and cut lattice strips lengthwise across the crust. If you are a nerd feel free to measure the width of the strips. If you don’t roll that way you can let your freak flag fly and cut strips of any thickness. There are no rules anymore, as we all know. You can make any sort of lattice you feel.

Me, I’m a fan of the classic basket weave. Get the chilled pie plate and crust out and put the filling in. Take half of your strips (if it’s hot out or I don’t have time I’ll do 3 thick strips by 3 thick strips, if I’m feeling more ambitious sometimes I do a lattice that is 10 strips by 10 strips) and place them on top of the filling vertically, spaced equidistantly apart. Number the strips from left to right: 1, 2, 3, 4, …, then lift all the odd numbered strips halfway up the pie. Put a lattice strip long enough to cover the diameter of the middle of the pie horizontally on top of the filling. Lower the odd strips over this one, then lift the even numbers below this up. Place a strip horizontally across the filling, leaving a little gap for the fruit to show through. Keep switching between the odds and even strips on both sides of the pie until you are out. Trim the edges and crimp together atop the edge of the pie plate.

Or don’t. Cut out some stars, braid some lattice, make everything a different size and don’t weave it. Hire your family to run the world, fire anyone investing you for ethical dilemmas and play golf every weekend. Run with the scissor of chaos.

Brush the crust with the wash and sprinkle the top of the pie. Take a long piece of aluminum foil that can cover the entire pie and roll the edges of it under in a circle. It will sit atop the pie, but not on the crust because that will fuck it up. It protects the top crust from burning while the pie sets. Think of it as a shower cap for your pie. It is important that is not just shielding the top but the edges of the pie, too.

Pull that baking sheet out and put your covered pie on it. Bake at 425 for 30 minutes. Lower the oven to 350 degrees, turn the pie 180 degrees and take the aluminum foil off. Bake for another 30 minutes. Let cool.

You must let the pie cool for at least two hours, ideally overnight. Hot fruit and sugar is essentially napalm, and if you try to eat that pie without anyone’s counsel you will burn your mouth and perhaps get impeached.