Thanks to the multicultural communities in Brooklyn, it’s still possible to find good food without too many frills–or a hefty price tag. This is especially true when it comes to cuchifritos spots. These eateries are NYC staples that serve up Puerto Rican and Dominican classics like pernil, beans and rice, fried snacks and long-cooked stews.

Frito means fried in Spanish, and and true to their name, these restaurants serve fried finger foods that are often found in roadside carts or stalls around the Caribbean, as well as slow-cooked meats, stews and other dishes. One of my all-time favorite of these on-the-go treats are rellenos de papas, which translates to stuffed potatoes. These are fried balls of mashed potatoes filled with seasoned ground beef. I grew up eating these and currently, it’s the only way I eat beef at all–the savory and salty seasoning is too good to resist.

Other snacks include alcapurrias, which are made from mashed and then fried yucca that’s also stuffed with meat. A lot of these restaurants also sell sorullitos, which are fried fingers made from cornmeal that look a lot like mozzarella sticks, as well as bacalaitos, a fried crunchy disk made out of dough mixed with small pieces of bacalao  or salted, dried cod. Since this is mainly Puerto Rican and Dominican food, it’s not spicy. It’s more salty and savory with a lot of recaito and cilantro. But if you like, sprinkle some hot sauce on top. And a lot of the finger foods, especially the sorullitos, can be dipped in mayuketchu, a mix of mayonnaise and ketchup.

I grew up eating all of those with my parents and siblings after Three Kings Day festivities, nearby block parties, and hanging out with friends after summer activities. I could make some of these at home, but the oil is a huge hassle to clean, and restaurants have mastered rolling out perfect sorullito fingers, which I have yet to do despite years of trying.

Many of these restaurants also sell sandwiches, roast meats like pernil and chicken, rice and  beans. Thanks to the salty and savory flavors of most dishes, any simple combo will go well together. Feel free to mix and match the fried finger foods with something like chicken or beans. One of the most common combinations is chicken, beans, and rice. No matter how intensely I need comfort food, that combination has never let me down, and I usually like some add-ons too, like salads and avocado slices. The soups are often great as well, but if you’re new and feel a bit nervous about certain meats, avoid mondongo at first. It’s made out of pig or cow stomach and it’s very hearty. It’s perfect for meat lovers though and worth giving a small bowl a try. 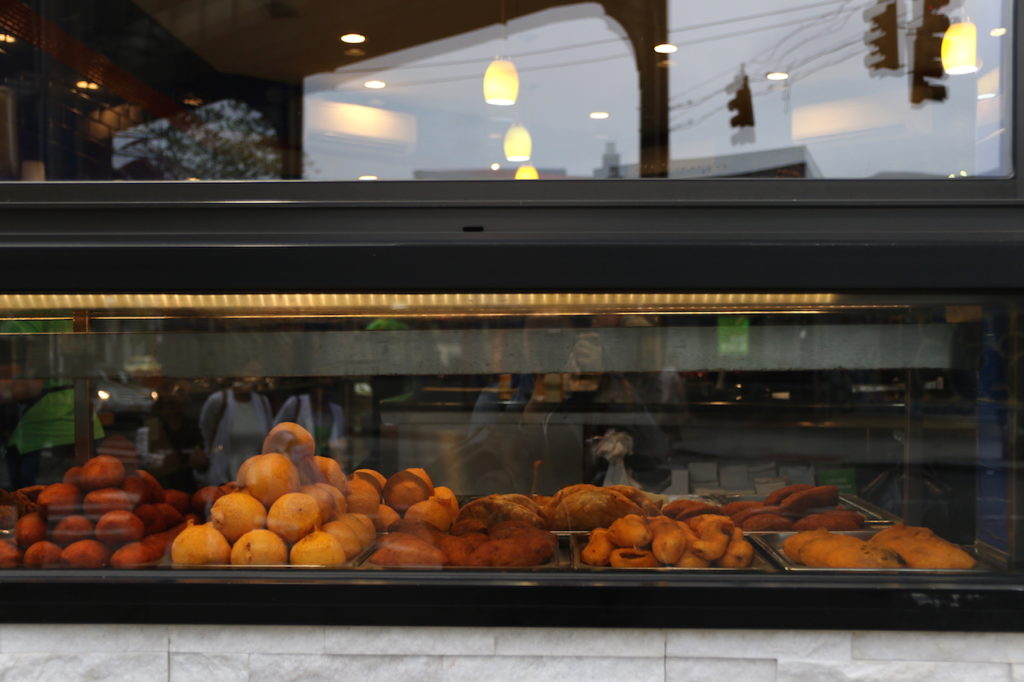 Here are a few locations to try:

La Isla: This is probably one of the best cuchifritos spots in North Brooklyn. I’m biased because I grew up going here after shoe shopping with my parents on Knickerbocker Avenue. It’s near several train lines and buses so it’s easy to get to. The location is a pretty casual place and has a row full of tropical juices and stools for sitting directly at the counter. La Isla is also one of the few places where I can trust that the tamarindo juice will taste good every single time. It’s a perfect place to grab snacks for a picnic in the park picnic.

La Isla Cuchifritos: This place has a reputation with lovers of Puerto Rican food as the place to get pastelitos, fried turnovers filled with chicken, beef, or cheese. They’re less than $2 each so it’s worth trying them all or pairing them with some soup or rice.

The Ave Lunchbox: This East New York eatery has some extra options on their menu like salads and  sancocho, a stew made around the Caribbean with meat, vegetable and often yuca or platanos, and asopao a thick chicken stew. I grew up eating both on rainy days or when I was sick. So anyone looking for savory comfort food that’s filling, those two dishes are a must. Trust me. They also have some seafood to pair along with the rice and beans or salads.

Puerto Viejo: This restaurant is a bougier version of other cuchifritos spots. And despite a higher price tag, it’s beloved on Yelp and has some pretty authentic options like shrimp soup, concon (crunchy rice), and Dominican-style vegetable stew. Anyone who has not tried concon should head here and order a plate immediately. I grew up trying to purposely overcook the bottom half of my rice in order get salty, crunchy rice. Don’t ruin your pot–just go here for your concon fix.

Some locations, like La Isla in Bushwick or Puerto Viejo, have an assortment of tropical juices to wash down the food with, which is a very Caribbean custom. You’ll find everything from sweet and tangy tamarindo, to parcha (passionfruit), and even lemonade to pair with your feast, and they’re especially refreshing for spring and summer. Once I crack out my flip flops, I begin to crave these fruit juices and though they are sweeter than what I would make at home.

Non-Native New Yorkers and non-Spanish speakers might feel a bit intimidated about ordering food at cuchifrito spots. But staff at a lot of these places either speak some English or understand when taking food orders, and if that doesn’t work, some restaurants have photos on their menus. If all fails, smiling and pointing, peppered with por favor and gracias, tends to work wonders in almost all situations (as well as cuanto questa for how much). Or bring a bilingual friend along and pay them in food for ordering everyone’s meal.

Spanish speaker or not, it’s worth giving island cuchifritos a try, especially now that the weather is warming up. Often served in takeaway containers, it’s perfect for a simple picnic at the beach, park, or piers. So if you haven’t grown up in or near some of NYC’s Latin American enclaves, head on over to some cuchifritos spots and try one of everything.