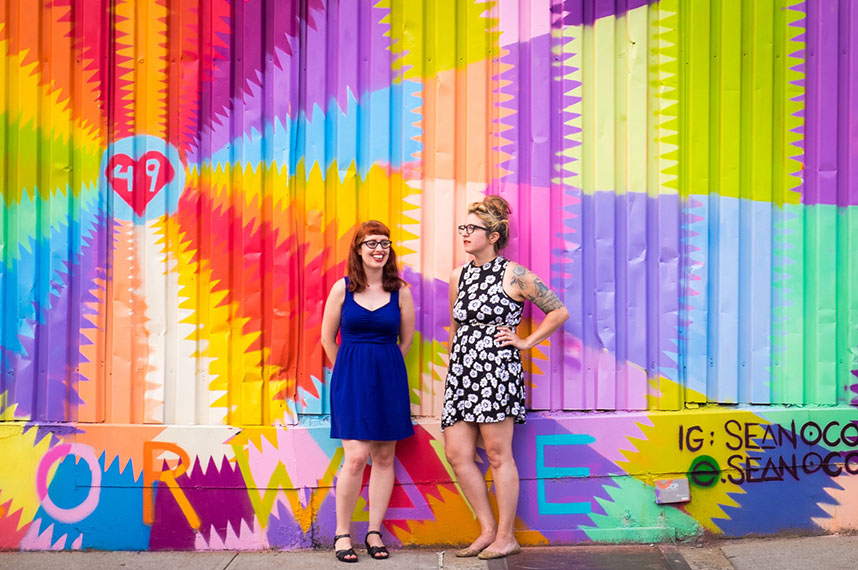 Everybody has a bucket list of things they want to do in life before they die, whether it’s getting married, having kids, traveling somewhere exotic, writing a book, or even skydiving. For the Greenpoint-based indie folk rock act Early Riser, their bucket list is quite offbeat. In the hilarious video for their song “The Nevers,” the duo —singer/guitarist Kiri Oliver and singer/cellist Heidi Vanderlee–are seen doing odd things and crossing them off their list: kicking the cigarette out of a stranger’s hand, bullying a high school girl, arresting a cop, holding a cat séance, posing as Law and Order SVU investigators, “booping” talk show host Chris Gethard on the nose, and, last but not least, playing in a punk rock band.

“I had seen the concept of a bucket list used so many times, but usually in the same kind of cheesy and generic ways, so I had the idea of doing a more ridiculous version,” Oliver tells Brooklyn Based about the quirky video. “We brought the idea to Drew Kaufman, who is a great comedy writer/director, and he immediately got what we wanted to do. The three of us brainstormed the list, so we ended up with a really fun cross-section of things we each thought would be fun to do on camera. And thankfully our friends, including Chris Gethard and Jeff Rosenstock, were down with some silly cameos. It was filmed at Heidi’s apartment and a few outdoor areas in Greenpoint, at the Footlight in Ridgewood, and at the Lynn Redgrave Theater where Chris was doing his show Career Suicide.

While those bucket list challenges were only conceived for the video, Early Riser actually did accomplish one major goal: recording and releasing their spunky and charming debut album, Currents, whose highlights include Oliver’s lyrics, Vanderlee’s cello playing (a rarity in indie music), and the women’s vocal harmonies. In addition to the record, the band is embarking on a tour with the Homeless Gospel Choir (the moniker of musician Derek Zanetti). “It is really exciting,” says Oliver. “It’s been a long process, and we’re really glad to finally be able to share the record with everyone.”

Oliver and Vanderlee first met in 2011 as part of a feminist arts collective called Permanent Wave; they later ended up working as music bookers for The Chris Gethard Show. Oliver and Vanderlee were also previously members of a band called Leda. When that group broke up, Early Riser, which originally started as Oliver’s solo project, was revived as a duo act.

‘We both grew up with our parents getting us into folk singers,” Oliver says, “and we both love a lot of the same bands, like the Thermals, the Hold Steady, the Replacements, and That Dog. In terms of the band’s influences, John K. Samson of the Weakerthans is my favorite songwriter, Okkervil River is the band that made me want to front a band with an acoustic guitar, and our biggest reference point for the arrangements on the recording was the Mountain Goats’ album The Sunset Tree.

“But mostly,” she continues, “our priorities for our sound were to have the cello be the lead instrument and to sing a lot of vocal harmonies. Beyond that, I think everyone’s individual influences came together naturally to shape what you hear on the album.”

Early Riser’s music on Currents is folk-influenced, but it also incorporates punk, pop and even a little Broadway. “I think that’s the result of what I just mentioned–everyone bringing their own mix of individual influences to the table. Heidi is a classically-trained cellist and played in orchestras before she played in bands. In terms of Broadway, I definitely grew up on Rent as much as I did on punk and pop, and my most-listened album last year was the Hamilton soundtrack. One of my goals is to write a musical someday.”

The music on the album, which was recorded in Philadelphia and produced by Joel Tannenbaum, and features , verges between exuberant tracks (“Just Start Dancing,” “Superglue,” “Find Me for the Waltz”), and reflective tunes (“Two Roads,” “Rattenberg”). For the songwriting, Oliver writes the lyrics and chords and then presents them to Vanderlee to work on the cello parts and harmonies. Then the song is workshopped with the full band.

“The lyrics draw on real life experiences,” Oliver says. “I wrote these songs over several years, and each one is about a significant person or time in my life. I tend to write when there’s something, a relationship or experience or feeling, that I need to process and move on from. But I work with metaphors a lot and I like to describe the feelings and situations in terms of broader concepts that I think other people will be able to relate to as well, so I think that’s where the poeticism comes in.”

“The Nevers,” which has that great lyric, “It’s okay to go out with a whimper as long as you come back in with a bang,” was written by Oliver in 2012 after her previous band broke up. “I started playing solo, which was something I had never planned or wanted to do–and it also terrified me,” she says. “But despite all that, and being really disappointed about not having a band anymore, I was able to channel a sense of optimism and excitement about the year ahead. When Heidi and I later reformed the band as a duo under similar circumstances, the song and its ending refrain felt relevant all over again.”

While Oliver’s literary yet personal lyrics cover the terrain of life’s ups and downs, the title track to Currents end the album on an optimistic note–about not holding back and going with the flow. “It definitely sums up the theme and spirit of the record, which is why it ended up being the title track,” she says. “I wrote it last, while we were already working toward going into the studio. The previous track, “The Line,” was originally going to be the last song, but I didn’t love that it ended the album on a darker note. When I wrote “Currents,” it immediately felt like the perfect way to tie things up, and as you said, end the album on a really optimistic note. I was also really excited to be able to bring back the refrain from the first song, “Just Start Dancing,” which helps solidify the album even more as a cohesive statement rather than a collection of songs.”

Early Riser played shows starting in 2014 as a duo at friends’ comedy shows “which was a fun way to ease into playing live in a really low-pressure environment,” Oliver explains. They have since played at venues like Brooklyn Bazaar, St. Vitus and Sunnyvale.

This upcoming tour will be Early Riser’s first ever. “We’re unbelievably excited and honored to be touring with Derek Zanetti, a.k.a. The Homeless Gospel Choir, who’s our A-F Records label mate and is a fantastic musician and human being,” Oliver says. “We do have some exciting things planned for later this year, but nothing we can announce yet except that we will be playing FEST in Gainesville the last weekend of October. We’re thrilled to be doing that.”

So what can the crowd expect from Early Riser’s kickoff show at The Gateway on Friday? “They can expect to be blown away by the catchy and meaningful tunes of The Homeless Gospel Choir, and to hear Derek say ‘this is a protest song’ a lot of times,” says Oliver. “We’re also really excited to have Long Neck from New Jersey, which is fronted by Lily Masterstrokes from Jawbreaker Reunion, who writes beautiful songs. And we’ll have a lot of new merch involving cats and unicorns and glitter.”

Early Riser will play on June 30 at The Gateway, 1272 Broadway, Brooklyn. Their new album, Currents, is out now.