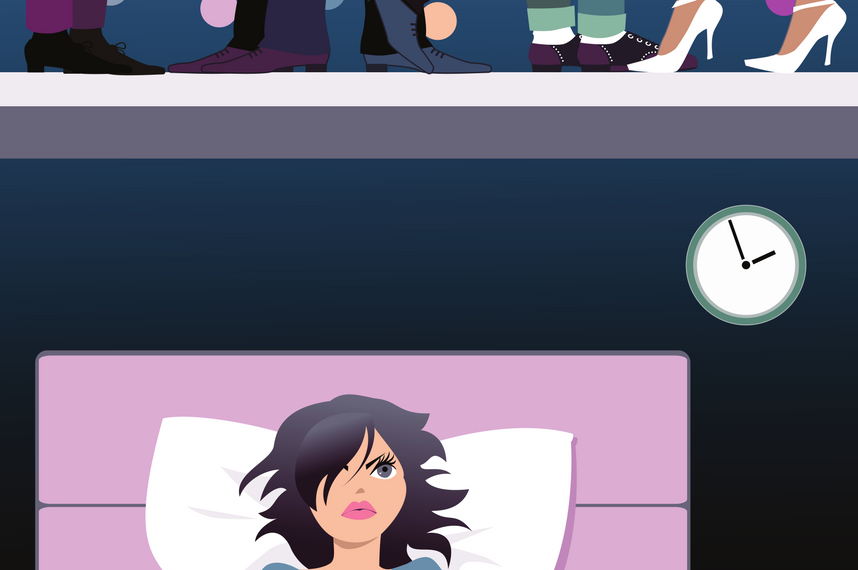 I hadn’t even moved into my overpriced studio, when my realtor pointed at a young man bringing boxes down the stairs and said, “He’s a total jerk. That guy lives above you. If you have any problems, talk to his wife. He’s a jerk,” she repeated. I started to get nervous. I saved every penny I had to get this apartment; did I move into the right building?

I was in my thirties and could no longer bring myself to find a roommate on Craigslist. Most of my friends were living with significant others or spouses and I wanted a place to come home to that was my very own.

I wasn’t sure I could swing it, with New York prices so high, the only thing I could afford was a studio apartment. I began to get anxious. I thought buying an apartment just for one would keep me in the single category forever. That’s just what New York City needed–another single Jewish girl. I wanted to be like my friends, in serious relationships, moving on with their lives.

I fought hard for this apartment. First I lost out on a bidding war. Then when it was back on the market, my teacher’s salary wasn’t enough to secure my spot. I was diligent, looking at more than 30 different apartments, and when the broker called me yet again, six months later, to let me know that the co-op board had rejected the buyer who outbid me, I was ready with a co-signer and a bid above asking price. A few days shy of my 34th birthday, I sat back on my loveseat and imagined how great this new part of my life would be.

When I interviewed with my coop board, we went over all the basic rules: 80 percent carpeting, no excessive noise after 10pm. Right after they recruited me for the gardening committee, a member pointed out that the walls in our building were very thin. “You don’t hear all your neighbors, noise only travels from the top down,” she said. “I’m a city girl,” I said proudly. “I can handle a little noise.”

This was my first time living alone and I was ecstatic. Finally no more roommates, some real solace in my life. Or so I thought. After about a week I began to be woken daily at 4:15am by my upstairs neighbors. It sounded like large weights were being used for an early morning game of basketball. As a teacher I desperately needed my sleep. I decided to confront the problem head on. I nervously knocked on door of the apartment above me. I remembered what my realtor said about the man with the boxes and prayed his wife would answer. Instead, a thirty-something man in shorts greeted me. I introduced myself trying to get a peek at their apartment. No carpeting. He was polite and thanked me for talking to him directly. He promised he would get carpeting immediately. Mission accomplished.

After a particularly rough week, the rude awakenings moved to 4:00am, sending me in a tizzy. I marched upstairs that morning and still no wife. I began to think he tied her up somewhere and she was the one making all the sounds. I begged him to get something to put down to muffle the noise, a rug, a towel, perhaps the 80 percent mandatory carpet. I thought I was being persuasive when he responded.

“I don’t go running upstairs every time I hear a damn noise!” he screamed. “ I get woken up all the time from garbage trucks just deal with it!” He then slammed the door in my face. I had only lived there a few months and already felt defeated.

Then the confrontations spread beyond the walls. I finally met the wife, when she and her husband in unison, “ewed” me on our tree-lined street. The kind of long drawn out whine one would expect to hear from a child after someone farted. If they saw me along the avenue and were alone, they’d look down or hide. Yet when they were together they laughed and pointed and made funny noises. Mostly I ignored them, but once I asked, “Are you really talking to me like that?” They just repeated in their mock-Brooklynese, “You talkin’ to me? Talkin’ to me?” I was living in Park Slope, one of the most desirable neighborhoods in Brooklyn, and couldn’t appreciate it. I tried desperately to get them out of my head.

I planned to take out my aggressions at the gym. I stood on a blue bosu ball and nearly fell off. A few feet away were my neighbors, working out together. It turns they were physical therapists and in top shape. I was telling my large steroid infested trainer about them, when the wife turned over her ball and began to do a rapid succession of army style push-ups, fast enough to make both of us feel intimidated. I could barely bench 20lbs.

These altercations went on for years. During that time, they became parents, I became a member of the board, but I was still powerless to stop their bullying. Sometimes I found myself taking the stairs to avoid them. One day I forgot and it was just me and the wife in the lift. I felt bold and flat out asked her, “Do you have something to say to me?” She was awestruck. Her mouth agape, eyes of stone.

“Are you threatening me?” she asked defensively. Then we reached the lobby and she ran out yelling, “You crazy paranoid bitch!” It echoed all the way to the laundry room.

I was mortified. Angry. I wished I had a big tall boyfriend to scare them away but I didn’t. I tried to be brave, acting like I wasn’t fazed, the same way I did in my own middle school days when my best friends turned on me. When I walked by they grabbed their kids and said, “stay away from her.” Somehow in public, I had become the monster. I had to find a resolution; the city was too expensive to move. I felt stuck.

I began different tactics: I pounded broomsticks, threw balls at my ceiling, wrote endless letters, yet nothing worked. When I realized I’d turned into a crazy person I began to reluctantly look for new digs. I wanted to like my neighbors, not hide from them. It was around then that my super whispered the news into my ear. “They’re moving, “ he said in the hallway. It was my turn to make some noise. I jumped high into the air and screamed so loudly my neighbor below heard and came up to see what happened. “I thought you won the lottery,” she said. In a way I did. They didn’t move to Afghanistan as I hoped, but a mere 20 blocks away. It was far enough.

My neighbors now live above me with their two little girls. Sometimes they run and I hear the pitter patter of feet, sometimes they play music loudly and sometimes they forget to take off their shoes. But they are kind and they email me when they are having parties–they even invite me. They bring their daughter over in her bunny suit on Halloween and last month brought me homemade chocolate chip cookies. Maybe I have gotten used to the noise finally, or maybe sounds resonate louder when they echo from cruel footsteps. I honestly don’t hear them anymore. When I see my neighbors we smile and it’s nice having children around. It means there is life. It means I am not alone. Even if I am in an apartment built for one.