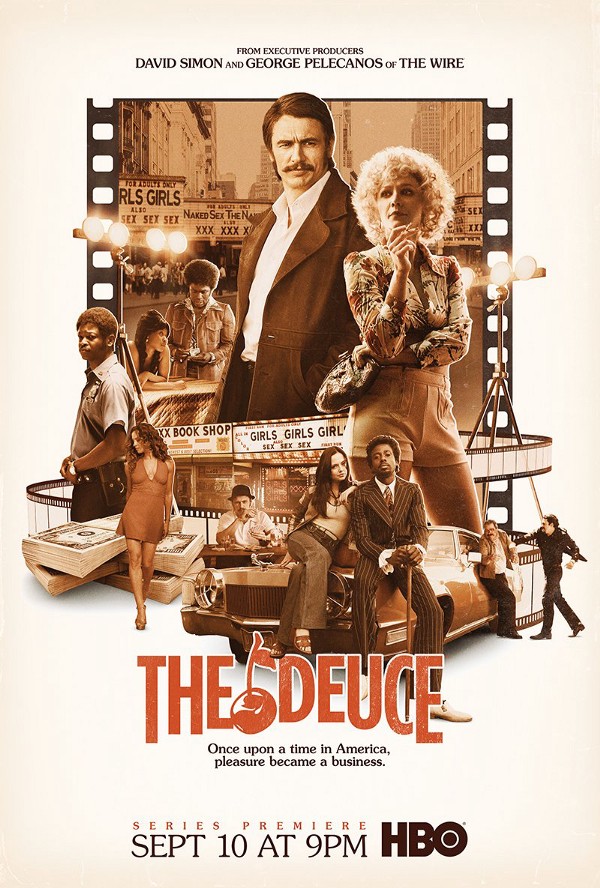 Watching the first episode of The Deuce–the new HBO series starring James Franco and Maggie Gyllenhaal about the rise of the pornography business in the early ’70s, got me aroused, but not for the reasons you might assume. I was excited to see my neighborhood on screen. The Deuce uses Bay Ridge as a location, and shooting took place about two years ago on my block.

Just like when I first saw Saturday Night Fever as a child, I spotted plenty of neighborhood specific elements in the pilot episode of the new series: the Verrazano-Narrows Bridge, the Colonial Road street sign, the nightclub that was formerly The Ridge, Fort Hamilton Parkway, and of course rows of single-family homes. Other Brooklyn neighborhoods like Park Slope, Ditmas Park and Williamsburg have been the more popular choices for major filming in recent years, with cameos on Master of None, The Good Wife and of course, Girls. Bed-Stuy got a serious period makeover for The Knick. So it was a real pleasure to peep Bay Ridge in the first episode of this new drama.

Created by novelist George Pelecanos and writer/producer David Simon (The Wire), The Deuce is an ensemble-driven drama that chronicles how pornography went from being an underground, illegal operation to a legitimate mainstream business. Most of the action takes place in seedy Times Square, years before it became the touristy commercial playground it is now. In The Deuce, the story is told through the perspectives of pimps, prostitutes, law enforcement, the mob, criminals, the media, and entrepreneurs—all of them playing a role in the creation an industry that now reportedly generates $14 billion annually.

The show’s aesthetics pay homage to classic Big Apple films like The French Connection and Mean Streets, “We did watch a ton of ’70s movies in preparation for this series,” Nina K. Noble,co-executive producer, said. “In addition to those you’ve mentioned, Taxi Driver, The Taking of Pelham One Two Three, and Black Caesar were good references. We wanted the show to seem like something of the period, rather than something contemporary made to look old.”

So what does Bay Ridge have to do with a story about the sex business from over 40 years ago? In the context of the The Deuce, it represents old-world Brooklyn where the main character Vincent Martino, played by Franco–a charismatic bartender with a savvy business acumen–is from. In a deteriorating relationship with his wife, Vincent takes refuge in a fleabag hotel in Times Square, setting the story in motion as he becomes a gradual participant into the growing sex business. 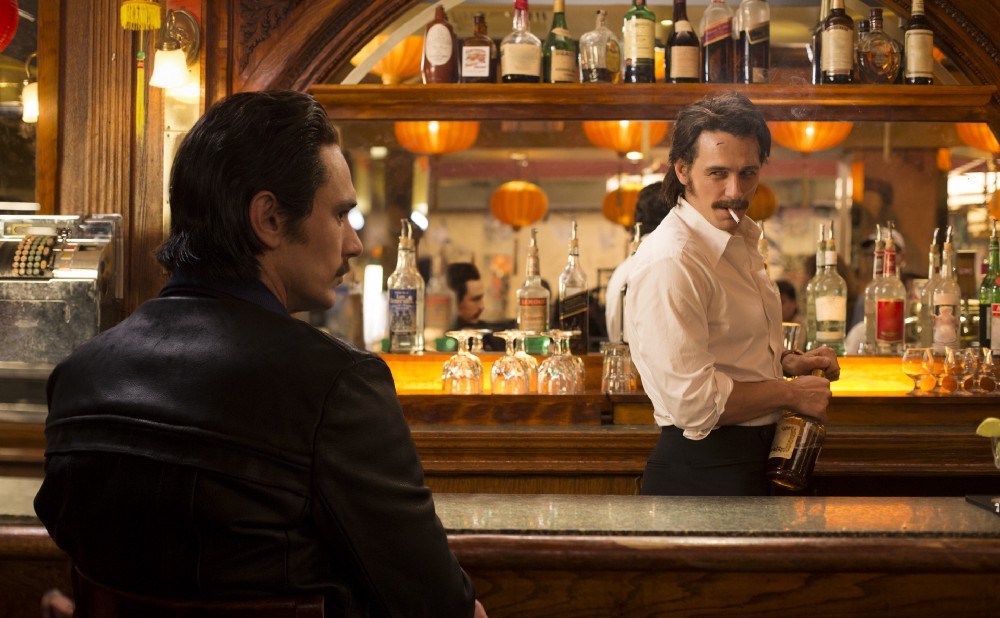 As writer Laura Leebove pointed out two years ago in her post for Brownstoner about the film shooting in the neighborhood, “the show… is based in New York in the ’70s and ’80s. Making Bay Ridge look like long-ago New York shouldn’t be too much of a stretch.” Despite noticeable changes over the last 25 years—from a growing Muslim population to boutique stores and chic eateries—Bay Ridge still has that working-class, surburban-lish sensibility. And that was exactly what Noble, was looking for in a shooting location. “Yes exactly,” she told Brooklyn Based, “more period correct buildings and it just feels like a world away from the city.” 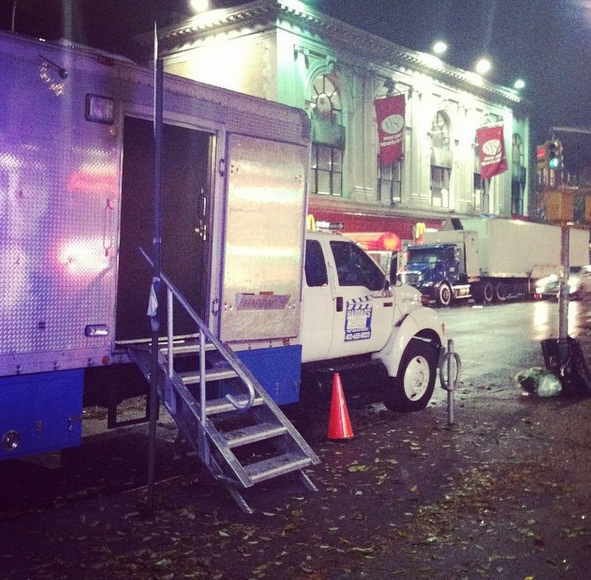 Shooting The Deuce on Third Avenue in Bay Ridge back in 2015. Photo: David Chiu

The juxtaposition of Bay Ridge and Times Square from the perspective of Vincent serves a thematic purpose, as it shows the two different worlds that he inhabits. One is quiet and virginal, while the other is dangerous and hyper-sexual. Underscoring that contrast, and Vincent’s movement between the two worlds, was central to the location. “That’s why our pilot director, Michelle MacLaren, had the idea to put the [Verazzano-Narrows] bridge in the background, as a reminder,” explains Noble. “Also when Vincent is waiting on the subway platform, we have the Manhattan skyline in the distance.” 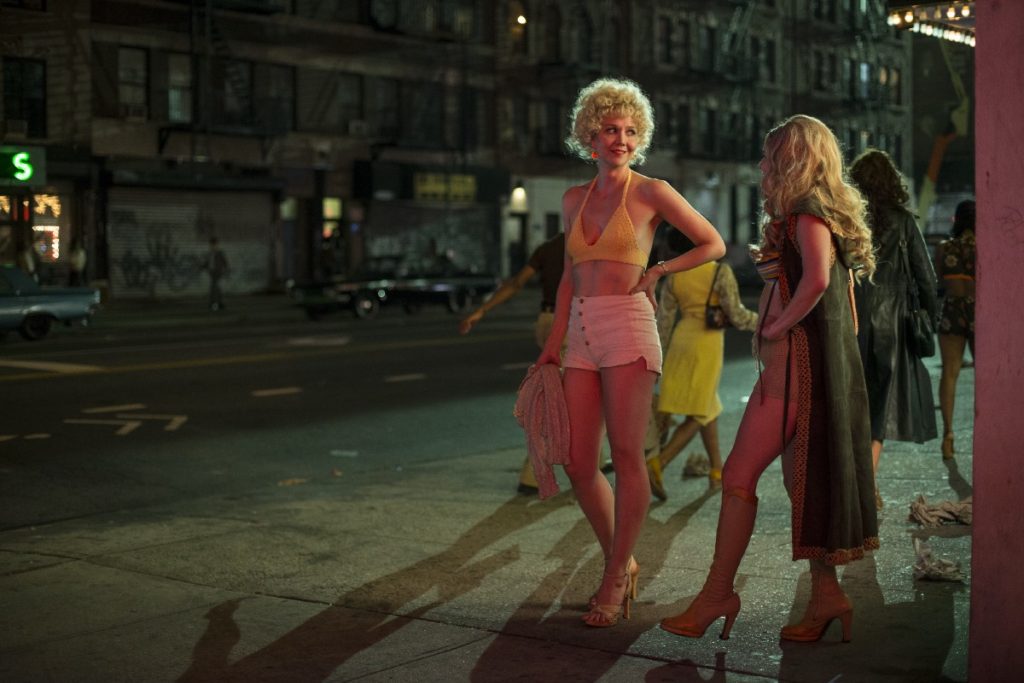 In addition to Franco, other notable performers in the series include Gyllenhaal as Candy, a prostitute who’s also a mother of a young son; Dominique Fishback as Darlene, another prostitute; and Gary Carr as C.C., a charismatic yet threatening pimp. While the characters come from different walks of life and backgrounds, the common thing is they all to hustle to survive in a world where relationships are more transactional than personal.

“The show is about commerce, about market capitalism,” says Noble. “Supply and demand, with humans as the commodity. It’s about cities, how they evolve over time and the cost of that to the residents. Still all relevant topics, though I think it was also a time of innocence and there was a spirit of adventure that couldn’t be sustained over time.”

The series may not put Bay Ridge on the national map like Saturday Night Fever once did, but it’s still nice for this local to see it represented in a new high-profile production. And depending on the success of the series, and whether Vincent ever makes a return trip to his old ‘hood, the camera crews may again be a familiar site on the block.

The Deuce premieres this Sunday at 9pm ET on HBO.