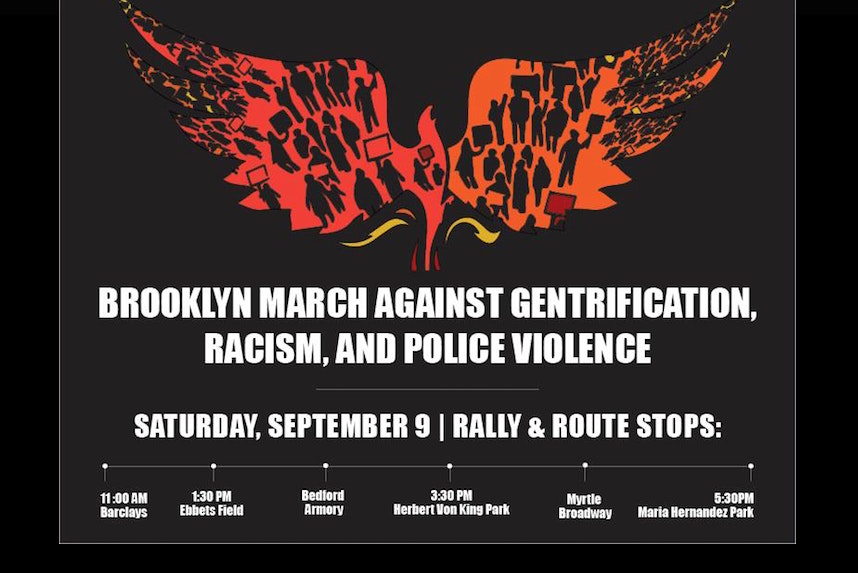 Even before we woke to news this morning that an 8.2 magnitude earthquake had struck southern Mexico in the night, the past few weeks have been nothing short of overwhelming.  Emboldened by the current political environment, white supremacists marched through the streets of Virginia unrobed and unhooded, proud of their hate. The President has called for the phaseout of DACA, and Hurricane Harvey and Hurricane Irma have left death and flooding in their wake, with Irma still predicted to make landfall in Florida this weekend.

It’s understandable that we here in New York may be feeling helpless with so much chaos and loss taking place so far away. But this weekend there’s a huge opportunity to focus your energy locally, to stand up for your neighbors and advocate for social justice right here at home.

The Brooklyn Anti-gentrification Network, otherwise known as BAN has organized an epic march to address gentrification, police brutality and racism on Saturday, September 9. Allies from all over New York City who want to contribute to the fight against displacement and racism are encouraged to come and rally with local organizations.

Dora Novey-Buttfield, who has been involved with BAN for almost two years, said that as a newer white resident in Brooklyn she felt a responsibility to learn how gentrification was affecting her neighbors. She wants allies and new residents to realize that displacement from affordable housing is intertwined with over-policing in low-income communities and for New Yorkers of color, who are subject to racist practices no matter what income bracket they fall into.

“Poverty, homelessness, LGBTQ discrimination, and so much more tie back to unjustly defining someone’s right to safe and affordable housing,” Novey-Buttfield said in an email.

Facts back her up. A report on the Coalition for the Homeless’ website shows that African-American and Latino New Yorkers are disproportionately affected by homelessness, making up more than 80% of the city’s homeless shelter population.

AN April 2017 story in the Brooklyn Eagle, outlined the findings of a report from the Institute for Children, Poverty and Homelessness that found that there has been a growing disconnect among the number of residents who are homeless in the borough and the number of resources available. The number of families in the city entering the shelter system increased by 33 percent from 2012 to 2015, while thousands of affordable apartments were lost to development.

“Gentrification is not just a buzzword…there are causes and real culprits; developers, politicians, REBNY (Real Estate Board of New York), corrupt and racist landlords etc., who at large intentionally, legally, and consistently perpetuated this violence,” Novey-Buttfield wrote.

Here’s the lowdown on the march, if you want to go and voice your support for affordable, livable communities in Brooklyn and beyond:

Supporters and protestors can meet for the starting rally at Barclay Center at 11am. The march, which will follow a path through Crown Heights,  Bed-Stuy and Bushwick, will end at 5:30pm at Maria Hernandez Park, near the Myrtle-Wyckoff stop on the L train. There will be several pauses along the way where families who have been displaced, organization leaders, and families who have lost loved ones to police brutality in New York City will speak. Those stops include a 1:30 pm rally will be held at Ebbets Field in Crown Heights and a 3:30pm rally will take place at Herbert Von King Park in Bedford-Stuyvesant.

Attendees are encouraged to bring signs as well as their voices.

If you can’t join the entire march, follow BAN’s progress on the network’s social media and via the hashtag #bkmarch2017 to join in when it reaches your neighborhood.

And this being Brooklyn, there’s an afterparty at Starr Bar in Bushwick that begins at 7pm. RSVP on Facebook and spread the word or donate to BAN to support their work.