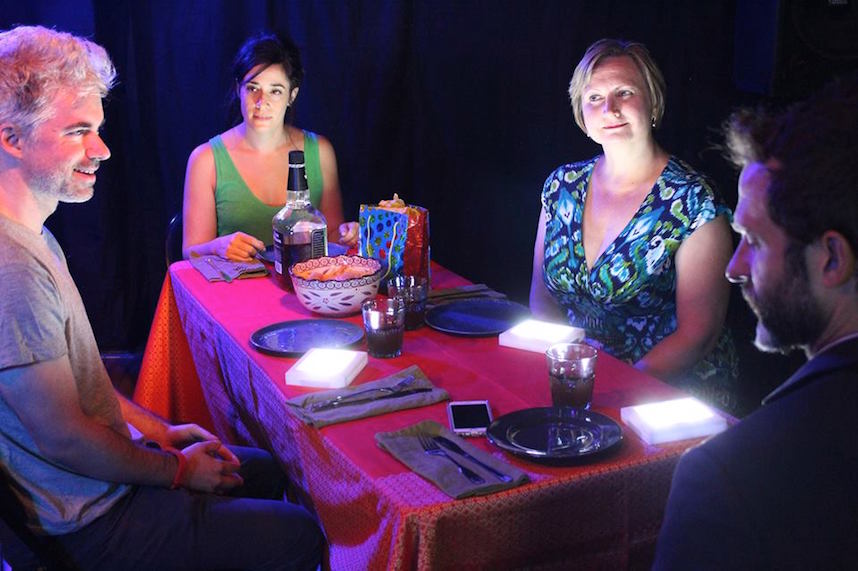 Making your way down to East Williamsburg’s Vital Joint theatre feels a bit like finding your path to purgatory. You enter a residential building, head down a musty grey stairwell flooded with purple light, and end up in a small, dark basement theatre. As the lights go up on Jeff Tabnick’s The Intimacy Effect, you understand that you’re not  in purgatory but you’re certainly close: it’s a cramped New York City apartment, one in which you’re about to get pretty intimate with four strangers.

The play opens as Merrily and Doug–a jovial couple from the burbs, all giggles and smooth sarcasm–arrive at Doug’s brother’s place for dinner. The scene is immediately tense–the brother, Matt, appears to be going a little bonkers as he pours the wine and cooks the meal, while Amy, Matt’s wife, quietly bursts into tears every few minutes, hands and hair covering her face.

Merrily and Doug make small talk while simultaneously prying, attempting to figure out what on earth happened to make the couple so upset. To Amy’s chagrin, Matt finally cracks and begins to tell a strange story about an accusatory pregnant woman who had visited their apartment earlier that day. Here begins a rippling hour of storytelling–we sit back and watch each character slowly unravel as they find themselves strung along an interconnected story, each about to learn something unexpected about one another.

There are times when The Intimacy Effect feels like watching dozens of people comment on a controversial Facebook status. This is not a bad thing. There’s something alarming about the dialogue–often the foursome pairs off into opposite corners of the room, and have hushed conversations in quick succession, and as a witness your head whips back and forth between the two huddles, not wanting to miss a word, feeling each conversation inflate the space with tension as you grasp onto clues, tidbits, things left unsaid.

Then again, not much is left unsaid in Tabnick’s play. All of the characters are never far from little light switches, which they turn on whenever they’re revealing their internal dialogue. It’s a delicious twist on atypical narration, particularly for audience members who like to be presented with every side of the story. All in all, Tabnick’s play is a seriously engrossing discourse on marriage, on parenting, and on the people you think you know, supported by a stellar cast.

The Intimacy Effect is written by Jeff Tabnick and directed by Eric Nightengale. It stars James Ball, Sarah Doudna, Jennifer O’Donnell, Richard Lovejoy, and Ruth Nightengale. Performances are on Thursdays, Fridays, and Saturdays at 8pm through October 14. Tickets are $20, RSVP to info@vitaljoint.xyz.