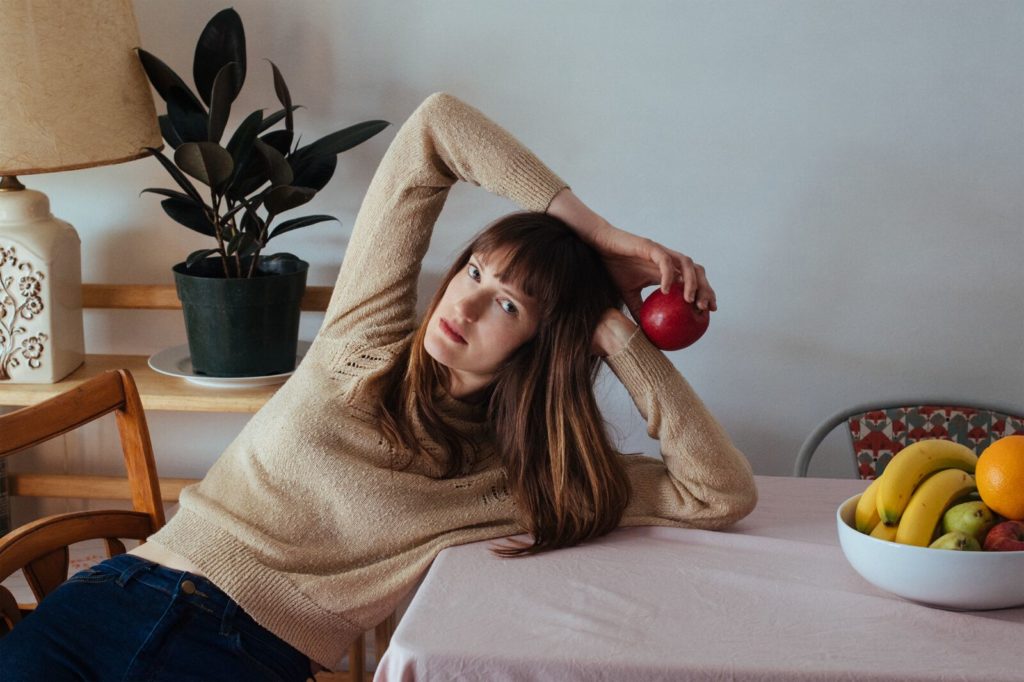 If the music on Impossible Accomplice, the debut solo album of Au Revoir Simone co-keyboardist/singer Annie Hart, sounds very stark and intimate, like a homemade recording, there’s a good reason for it. While pregnant with her daughter three years ago, Hart was also working on her own music in her basement studio of her Brooklyn home, planting the seeds for Impossible Accomplice.

Hart’s new solo work isn’t a radical 180-degree turn from Au Revoir Simone’s music–both share the ethereal and dreamy aspects of synthpop, though Impossible Accomplice is a little more minimalist-sounding in contrast to the band’s recent efforts. The result is something that feels both experimental and accessible, recalling late ’70s/early ’80s electropop (think Kraftwerk and Tubeway Army).

Impossible Accomplice was released just over a week ago and Hart, who has been performing some shows locally, will embark on a solo tour in October, first in the UK and then on the West Coast next month. While Au Revoir Simone is currently on hiatus (their last album, Move in Spectrums, came out in 2013), they haven’t completely disappeared in the public eye–the trio recently appeared on Twins Peaks (David Lynch is a fan). Before her upcoming show opening for Matt Pond PA at Brooklyn Bazaar, Hart spoke to us about making the new record.

Congratulations on the new solo record. How does it feel to have this album out? Was this something planned or spontaneous?

Thanks! It feels really great to have the record out.  I’ve been working on it for a long time, so it’s nice to have that psychic weight lifted and this chapter of exposing my work the public eye begin.  I started the album spontaneously, simply as songs I was writing in my spare time, but due to the strong and dogged encouragement of a few dear friends I started making steadier and more intentful progress toward its completion.

Can you talk about the origins of the record—when did it begin and how long did you work on it? I read that you were working on music in your basement.

I started the record about three years ago, when I was pregnant with my daughter.  She’s now two-and-a-half!  I wrote and recorded the whole thing in my spare time, and, as you say, that took place in my basement recording studio.  I’m very much a perfectionist, and without my bandmates, I initially had a really hard time composing each song to completion.  It’s hard to trust yourself after more than a decade of sharing the same brain and practice space with two other people.  But I started realizing that a song could just be as done as felt good to me.  I kept coming back to demos and really enjoying them.  I had Jorge Elbrecht, who I really trust to understand what I am going for, mix the songs with more than four tracks, and he added the magic I couldn’t figure out on my own.

What did you want to do on this record that perhaps you weren’t able to do as part of Au Revoir Simone?

Again, I didn’t have an agenda with this body of songs.  Writing and composing has been a compulsion for me since I was a child.  I never felt “trapped” by Au Revoir Simone.  Obviously, we each had our differences in taste, but it was a generally supportive environment as far as band dynamics go.  But I definitely had to deal with more constraints without [bandmates] Heather [D’Angelo] and Erika [Forster].  First of all, I abhor using backing tracks live.  For the music I make, it takes away the magic.  I know the vast majority of other people don’t feel this way, but I am compelled to honor this vision.  So I wrote each song rather simply, with only a couple flourishes above what I could play with two hands (or with two hands and a friend), and I leave out parts live.  This means that the drum track has to take over a lot of the energy fluctuations, and consequently, I’ve gotten a lot better at programming drums.  I was in drum line in high school, and I’m glad to really get back to the nitty-gritty of that aspect of composition.

I definitely sense a less-is-more, minimalist approach on this record. I also hear lot of different influences: New Order, Kraftwerk, Depeche Mode, Gary Numan. Do you think they played a role somehow on Impossible Accomplice?

Of the bands you mentioned, the only one I didn’t delve deep into to write this record was Depeche Mode.  I got very into Tubeway Army (Gary Numan’s prior band) and New Order and would study the structures of their songs. Kraftwerk, of course, I’ve been into since the early days of ARS, when someone in Cleveland culled us “the female Kraftwerk.”  I wanted a lot more live bass with sawtooth synth for this record and these were all great references for that.

The record incorporates different moods as well as tempos. Lyrically, is there a common theme that the songs on the record share or do you see them unique in their own right?

The only one that doesn’t fit the theme is “Hard To Be Still,” which is a straight-up love song about my husband, who has shown me, in his quiet, steady way, what true love really means.  The other songs are tales of either unrequited love or the wrong kind of love.  They explore the themes of being ready to give up caring about someone who treated you poorly, and that all starts with forgiving yourself and moving on.  The other ones are about wanting people you can’t be with and how crazy that can make you.

Let’s talk about the leadoff song, “I Don’t Want Your Love,” which is a lovely track.

Yeah, a long time ago I was with someone who had a girlfriend. He kept telling me he was going to break up with her for me so we would hook up.  And then after we hooked up, he would ridicule me in front of all our friends.  This was a cycle that played a huge role in my relationship with men and what I felt I was entitled to from them.  “On The Way Down” is about this same relationship.  The last lines of that, “Don’t give me that, because I deserve more,” echo “I don’t want your love,” in that they are both about me realizing who am I now is not who that younger me was.  She is informed by the younger self’s experiences, to be sure, but now I know the hurtful, scathing public remarks were a cover-up for his guilty feelings.

Generally the songs are very uptempo and danceable, but I also was struck by the subdued “I’ve Been Seeing You in My Dreams.” Could you explain a little bit about its origins?

That one was written on my dream combination of keyboards (that you hear also in most of the other songs on this record) of electric piano and Oberheim OB-8.  The OB-8 has roughly ten quintillion amazing sounds on it, and half of them I could (and sometimes do) listen to for ten minutes straight.  I love the development of that main synth sound so much.

Thematically, that song started out as about a crush, but I thought it would be more interesting to have it be about someone who was cheating on you, and that’s the reason you are seeing them in your dreams.  You’re seeing the perfect possibilities of the relationship and the desire, but your partner is not fully with you.  It’s definitely a true story.

The title of the album Impossible Accomplice is very unique and clever, in my opinion. How did you arrive at that, and what does it mean to you?

Thanks!  The title is actually something I read in an interview in the Rough Trade store magazine.  It was an interview between two women, describing how they met, how the other one seemed like a “possible accomplice” to art and life adventures.  I flipped it in my mind and mulled it over while I made the coffee and suddenly it struck me how that word pair echoed the sentiment across the record.  Most of these songs are about love that I couldn’t have for some reason or another.   I just couldn’t have what I wanted at the time, and the person in question was just not happening although they seemed perfect.  I think of “Accomplice” in the way that the two women in the interview did, like someone to share life with, but also maybe get in trouble with.  Now I see the people i wrote the songs about were impossible accomplices due to life situations or character flaws.

You’ve been doing shows in New York City recently and then next month you are going to perform in the UK and on the West Coast. Is it just you on stage or accompanied by additional players? And will it be just songs from the album.

I play live in a black unitard and have a friend with me.  I’m usually accompanied by projections.  I play a couple covers but have a few new ones I’m toying with playing.

Meanwhile, what’s currently going on with Au Revoir Simone? And what it was like to be in Twin Peaks: The Return with the other members of the band?

No concrete plans with Au Revoir Simone, but we have a couple projects in the work. And filming Twin Peaks was incredible!