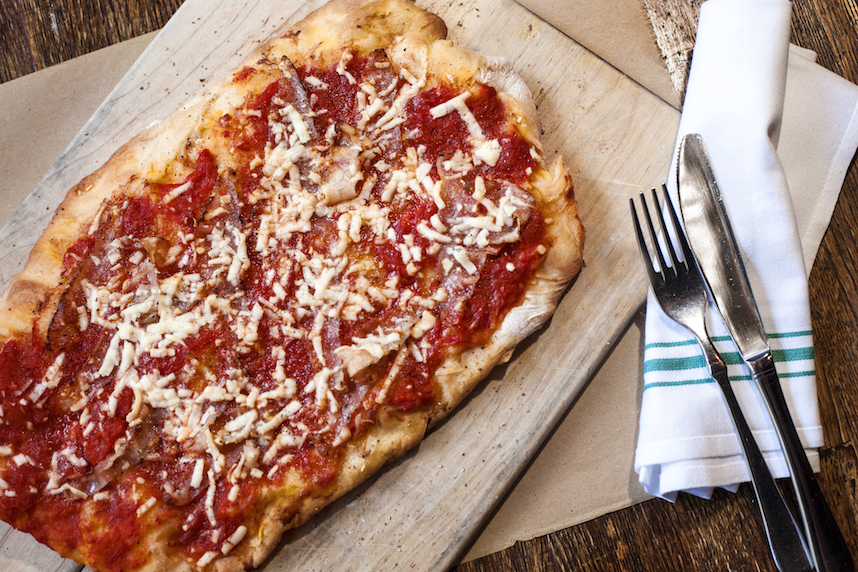 “Everyone knows pizza,” says Michael Schall, co-owner of the just-opened Camillo restaurant in Prospect-Lefferts Gardens. “But there’s also this older, authentic version of pizza that you can find in Rome but you can’t find in too many other places.”

In this Neapolitan-soaked borough, it was only a matter of time before Roman-style pizza started having a moment. You can find pinsa, Rome’s traditional style of pizza, at the new Pinsa Lab in Park Slope and now at Camillo, from the team behind Clinton Hill’s beloved, 17-year-old Locanda Vini e Olli. This is the first new eatery from Schall and his partners, executive chef Michele Baldacci and GM/sommelier Rocco Spagnard, former employees who took over from the restaurant’s founding owners in 2010.

“At Locanda, we offer a very authentic Tuscan experience, and we knew we couldn’t replicate it because that space is so unique,” explains Schall. With the new spot, “we wanted to offer a different type of Italian cuisine, and to do it authentically.”

“We’d been wanting to do this for a while and just never found the right space and the right neighborhood.” PLG, Schall says, “had been on our radar. It’s architecturally stunning—some of those blocks are the most beautiful in Brooklyn. It’s near subway lines, but underserved in terms of restaurants. There are some great places—mostly fast-casual Caribbean spots, there’s Food Sermon which is fantastic, and there are a bunch of new bars on Flatbush, but on this side of the neighborhood there’s nowhere like this to sit down for a meal, for people to go out to eat with their kids, or just come in and enjoy a cocktail.” 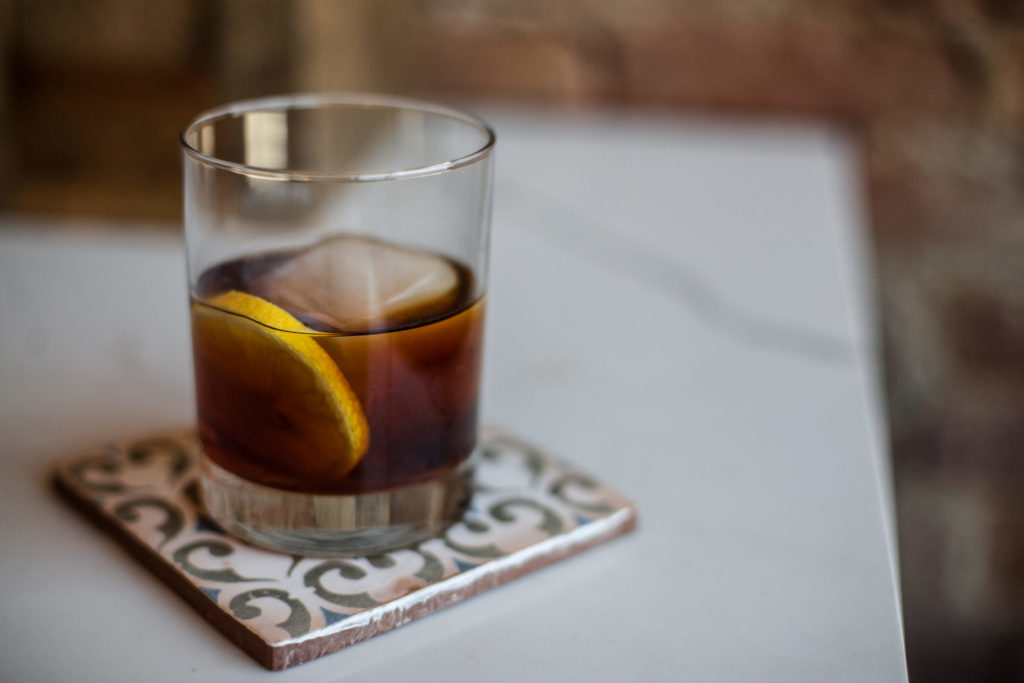 With four different types of housemade amaro, tasty drinks like an artichoke negroni, and an exposed-brick-and-Edison-bulb-accented interior, the 48-seat spot is definitely the first of its kind on this stretch of Nostrand Ave. It’s bound to be become a neighborhood fave and a gentrification lightening rod. (One local resident really summed it up, marveling through the full-length windows on a very busy opening weekend, interrupted his Facetime-while-strolling conversation with an excited, “Oooh girl, look at this new restaurant that just opened in my neighborhood…very Caucasian.”) 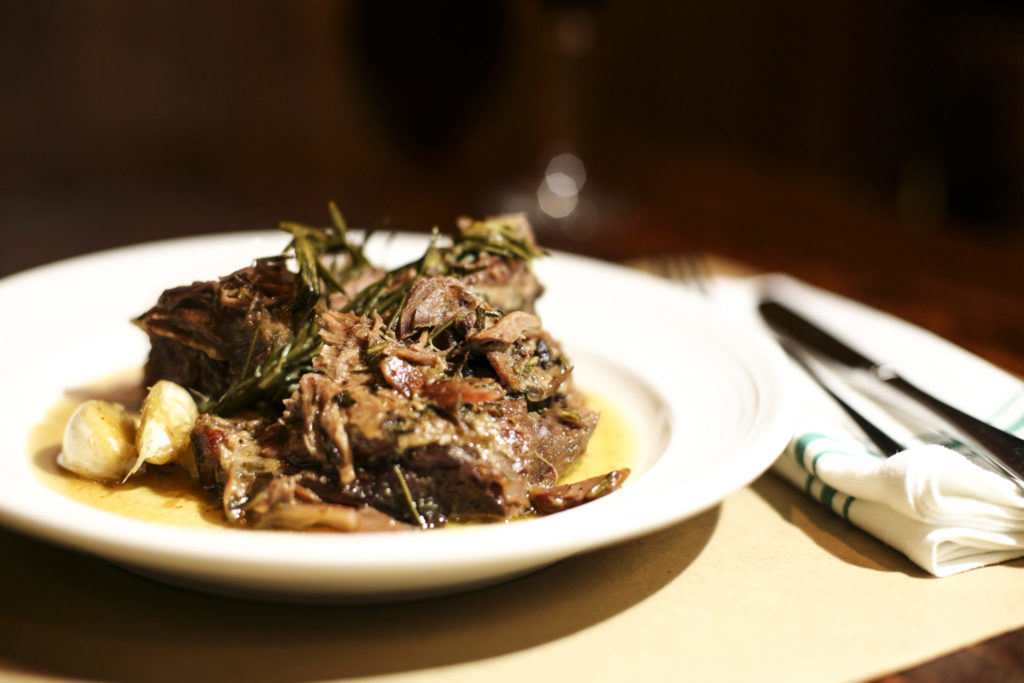 To be fair, Camillo’s owners are making an effort to appeal to the community’s diverse denizens. The dessert menu incorporates items from the excellent, black-owned Desserts by Michael Allen across the street, and Schall specifies that, “being in a Caribbean neighborhood, we wanted to have something on the menu that had cross-cultural appeal”—hence one of the three mains is abbacchio alla Romana, goat meat slow-roasted with anchovies and rosemary—a salty, gamey delight of a dish. And while mains run $18 to $22, pizza and pastas start at just $12. Unlike Locanda, where the menu is designed for a traditional four-course affair, here a pasta or pizza, plus maybe a salad or app to share, is enough for a full meal. 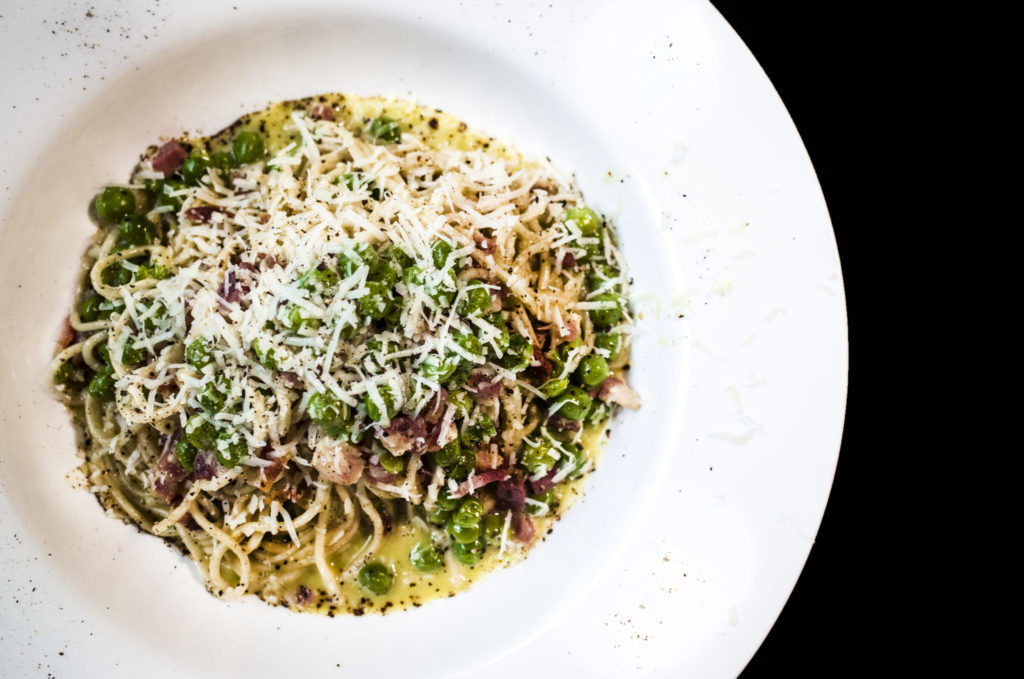 But about that pizza.

“It all comes down to the crust,” says Schall. The thing that distinguishes pinsa is the blend of wheat, rice flour and spelt; with more protein than a floury Neapolitan pie, it needs longer to rise and ends with a very crispy, almost cracker-like crust after being cooked for 2.5 minutes in a gas oven, as opposed to the instantly-in-and-out method of a wood-fired Neapolitan joint. The resulting pizzas will appeal to diners who get bent out of shape over a soggy bottom. 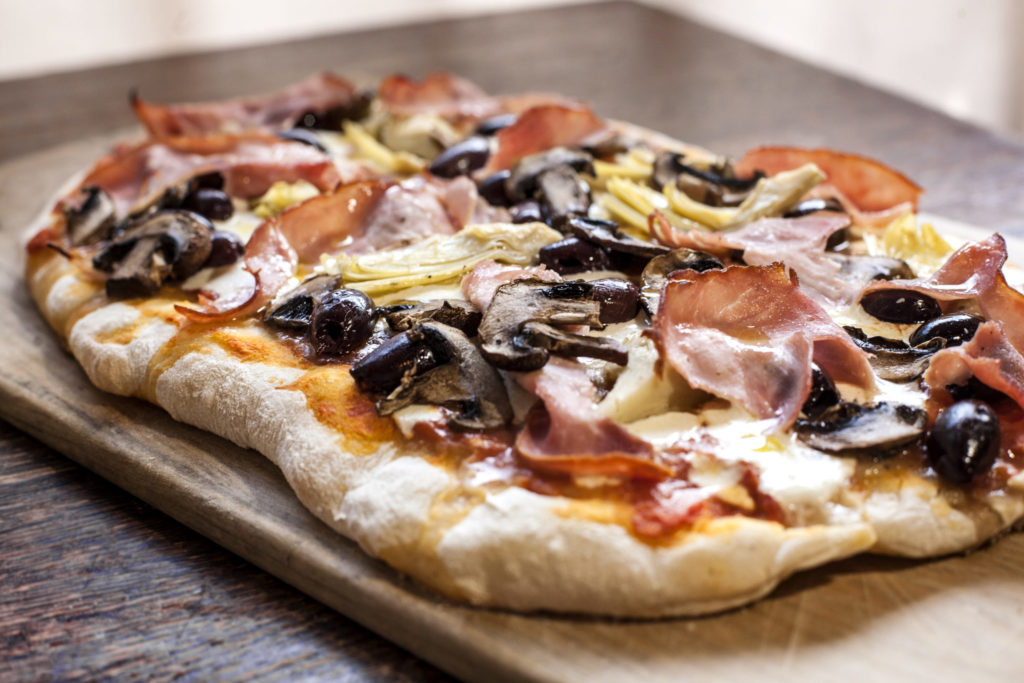 I actually didn’t love the margherita I ordered on my first visit—surprisingly overloaded with cheese, it seemed designed for kids or others who want “regular cheese pizza.” I was much happier when I returned for the funghi, a more sparing and delicate mix of roasted wild mushrooms, smoked buffalo scamorza cheese and fresh oregano.

Not sure I’m ready to crown pinsa the new king of pizza, but it’s a fun change and should make for a sturdy delivery option, too—which the Camillo crew plans to add soon.