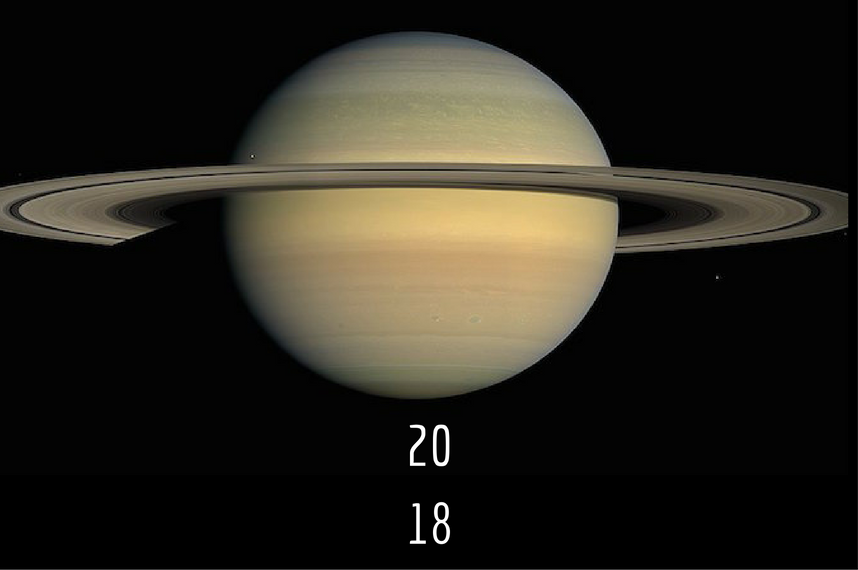 I spent the first bit of New Year’s Eve 2017 feeling a little sorry for myself. I have a toddler and a new baby and my husband is away, so I was at my mom’s house in Vermont, where the temperature settled in below zero all day. I thought about NYEs spent in Brooklyn with friends and the hungover movie days that usually followed with wistful self-indulgence. Then I drank a glass of port with my mom and her best friend, settled in on the couch to watch some trashy TV and eat the last of the Christmas treats, and felt immensely thankful for the life I have, even with all its runny noses and lack of glamor. January’s Culture Essentials reflect that gratitude and reckoning with where my life is right now. There are no dance parties or wild avant-garde art shows on this list. These are the things I’m going to enjoy during this long, cold, cozy first month of 2018, and I hope you will, too. 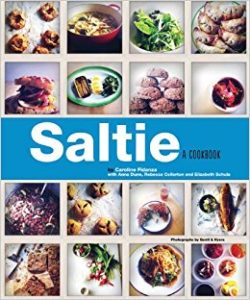 The last day of 2017 was also the last day for Saltie, the tiny Williamsburg sandwich shop that was so much more. Turn this bummer into an opportunity to up your vegetable-and-fresh-herb-forward culinary game, and go get Saltie: A Cookbook immediately. Owner Caroline Fidanza is one of the finest chefs from the farm-to-table era in New York City dining, and her book is an excellent way to hone your own cooking and really learn how to do simple but crucial things like cook delicious eggs and make a heart soup and get more vegetables into everything. Start by making the recipe for cock-a-leekie soup–it’s perfect for this frigid weather and will quickly become a staple in your kitchen. Then learn how to make a Spanish tortilla, buy a nice bottle of sherry (or three) and invite some friends over. And yes, there’s a focaccia recipe in there. None of it will be quite the same as it tasted straight from Saltie, but it will give you the opportunity to spend some thoughtful hours in the kitchen. 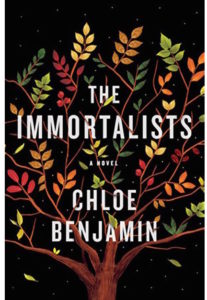 There’s a strong crop of dystopian books concerned with the surveillance state, the future of women’s legal right to their own bodies , and generalized paranoia coming out this month and this year. In January though, as I think about the year(s) ahead, I’m going to opt for fiction that delves into a more personal form of prognostication. The Immortalists is the story of four siblings who consult a mystic who tells them each the supposed day of their death. The novel follows them, and how the prediction affects their lives, over the course of the following five decades.

Do we need another documentary series about how all food is a lie and that small farmers are being worked to death and driven out of business by rapacious agribusiness? Yes, it seems like we do, and I’ll watch Rotten, from the same folks who brought us Mind of a Chef, both to see whether there’s anything new to say on the awfulness of our food system and as reminder that my choices at the grocery store and the Greenmarket do matter.

Word on the street is that Gillian Anderson won’t be back for another season of The X Files, which may be a mercy, in the end. The reboot, as with the original, was strongest when delivering funny, one-off, monster-of-the-week delights, weaker when mired deep in conspiracy, and the trailer for X Files 2018 certainly makes it look like it will focus on the latter. It does also appear that Dana Scully is going to kick all sorts of ass this time out, and Gillian Anderson just keeps getting better, so I’ll watch. As ever, I want to believe.

Back in the 90s, Sunday night on Fox was appointment viewing, with The Simpsons and The X Files, and a coveted spot in between, which brought the world Malcolm in the Middle and That 70s Show. No one watches TV that way anymore, but Fox has stacked the deck for 911 on Wednesday nights anyway, maybe because it’s a real head-scratcher of a show. It’s a first responder procedural, which is a bit of a yawn on paper until you realize that Peter Krause and Angela Bassett both play emergency responders, with Connie Britton as a 911 operator. That’s a lot of talent. The show comes to us from Ryan Murphy and Brad Falchuk, creators of Glee, with Tim Minear of American Horror Story as the showrunner. What’s going on here? Is there more than meets the eye? I’m hoping this is a real drama instead of a PR piece for law enforcement as so many procedurals have become. 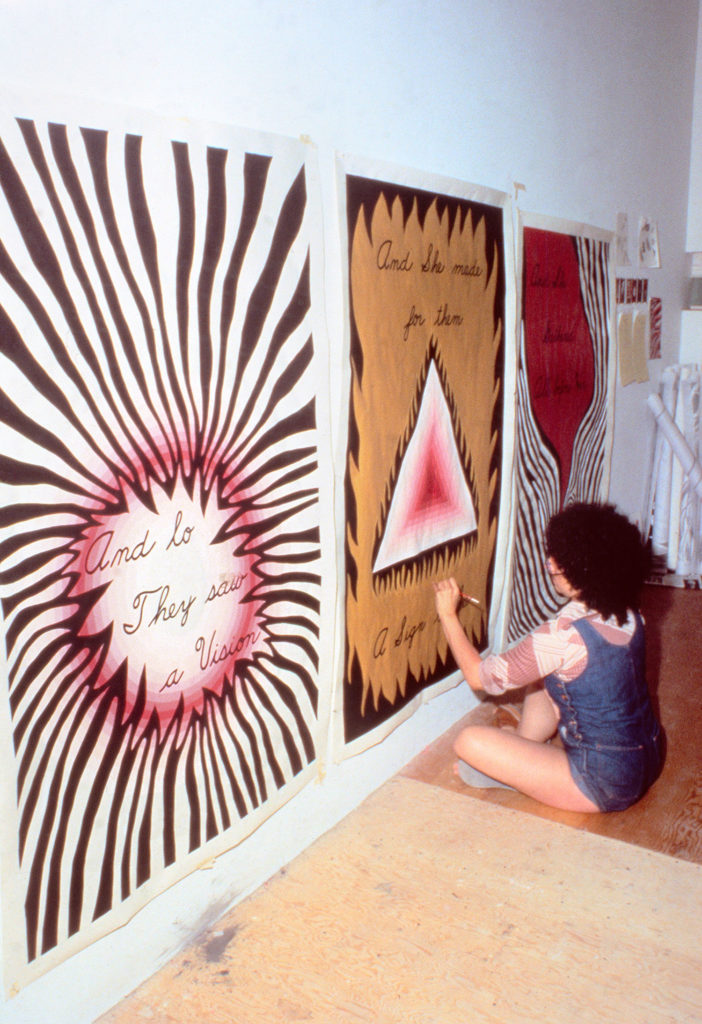 Judy Chicago in 1978. Photo: Courtesy of Through the Flower Archive

The Brooklyn Museum is home to the Sackler Center for Feminist Art, the semi-permanent home to Judy Chicago’s famous installation, The Dinner Party. Chicago will speak with Sarah Thornton, a sociologist and writer on Jan. 18 as part of the current exhibit, Roots of “The Dinner Party”: History in the Making. Her work feels more vital than ever right now, and it should be interesting to hear Chicago’s thoughts on feminism, women in the arts and our current moment. Tickets are $16. 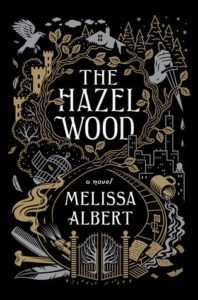 Okay, I will admit that I have cast some side eye at adults reading or talking about YA books in public, but with the exception of vampires that sparkle in the sun, I’ve decided that I want to better understand the genre. There’s no better place to start than with The Hazel Wood, which prompted a publishing house bidding war and has already had its film right snapped up. I read an excerpt and I’ll admit it–I want to find out what happens next.

There’s really no more entertaining night in show business than the Golden Globes. This year the awards ceremony that has become known as “the drunk Oscars” may even be relevant as Seth Meyers, who has sharpened his wit against our dullard-in-chief over the past year with surprising ferocity, hosts. There’s no way Meyers will sidestep the Harvey Weinstein-sized elephant in the room, there’s already a red carpet blackout planned to further highlight harassment and discrimination in Hollywood, and it should be interesting to see what he, and other stars, do with this moment.

2. Read up on Saturn in Capricorn

You likely didn’t notice, but on Dec. 19, Saturn shifted from being in Scorpio to being in Capricorn, where it will remain for the next three years. Don’t roll your eyes astrology naysayers (or do, and just skip to my recommendation to see a movie that is likely pretty terrible unless you share my enthusiasm for Liam Neeson’s action dad persona), this is a big deal. Saturn is the ruling planet of both Capricorn and Aquarius, so for the next five years or so all of its influence will be, for lack of a better word, even more Saturn-y. These tend to be periods of great cultural change–the last few were 1989-1992, 1959-1963 (roughly the first couple seasons of Mad Men), and 1929-1933. Read up (here and here) prepare to really lay some deep astrology knowledge down the next time someone blames their funk on Mercury being in retrograde.

If you’re a regular reader of this column then you know that my taste in movies runs toward the ridiculous. For example, when I was very pregnant with my son, my husband and I went to see Taken 3 in the theater, partially because we knew that the movies would soon become a real luxury, and partially because we actually wanted to see it. (Pro-tip: There’s really nothing better than a show at the Kips Bay movie theater and then dosas in Curry Hill.) So obviously I’m excited for The Commuter, even though it’s much more likely that I’ll be watching it on my couch than in a theater at this point. If you haven’t seen the trailer, it’s basically Taken meets Murder on the Orient Express, meets Black Mirror, starring Liam Neeson. Boom, done.