New York’s beer scene has undergone a seismic shift in recent years. As recently as five years ago, you’d be hard-pressed to find Brooklyn-brewed beers on tap that weren’t from Brooklyn Brewery or Sixpoint, which have become the forefathers of Brooklyn craft beer.

Now the borough is home to 15 breweries, with three more on the way. (Grimm Ales is expected to open in March, Transmitter will open by summer, and Stillwater sometime this year.) With so many Brooklyn beer producers, it’s easy to see why bars are including more and more local options on their tap lists.

Don’t let your beer exploration stop there, though. The following brewers are creating beers and customer experiences unique to their breweries and taprooms. Visit one or all of our new favorites, which either opened in 2017 or are coming soon. 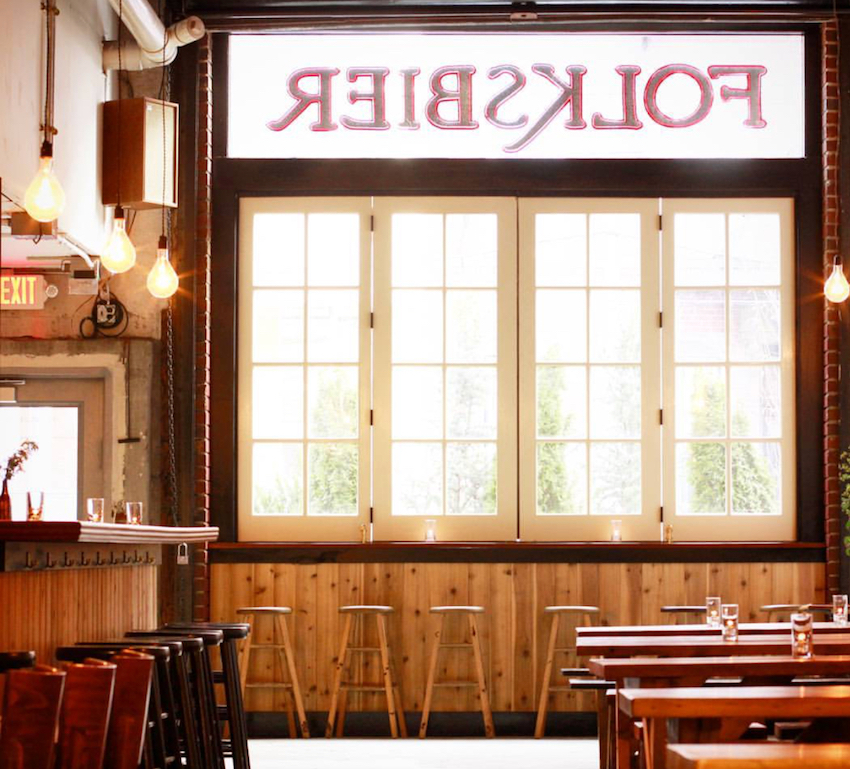 Folksbier has been in existence for several years, but its year-old taproom, hidden in a residential strip on Luquer Street, remains highly regarded among beer nerds. The Old World-inspired, New World-adapted brewery takes inspiration from traditional German beer styles and gives them a Brooklyn twist. Folksbier also began canning their beers in October 2017, with two fan favorites out on the shelves: Recurring Dreams NE-Style Pale Ale and Raspberry Glow Up. The brewery also plans on growing into a bigger brewing system in 2018.

Right now, Folksbier is producing an old world-inspired lager call OBL, Old Bavarian Lager, which Director of Sales and Marketing, Phil Sorrentino, says “comes from a context of malt- focused lagers in Southern Germany, as well as the old style of lagers made historically here in Brooklyn.”

On weekends, expect a small catered menu from Prime Meats, cheeses from Saxelby Cheesemongers, as well as a new offering Friday to Sunday, 3-9pm: tacos! “We will definitely be expanding the menu and times we have food so keep an eye out for more on that front,” said Sorrentino.

Sharp cheese washed down with a Raspberry Glow Up, for us; for Sorrentino, it’s the short rib carnitas taco with an OBL. “I’d recommend a dash of the Spicy Habanero hot sauce from our friends at Cultured Foods Brooklyn!” 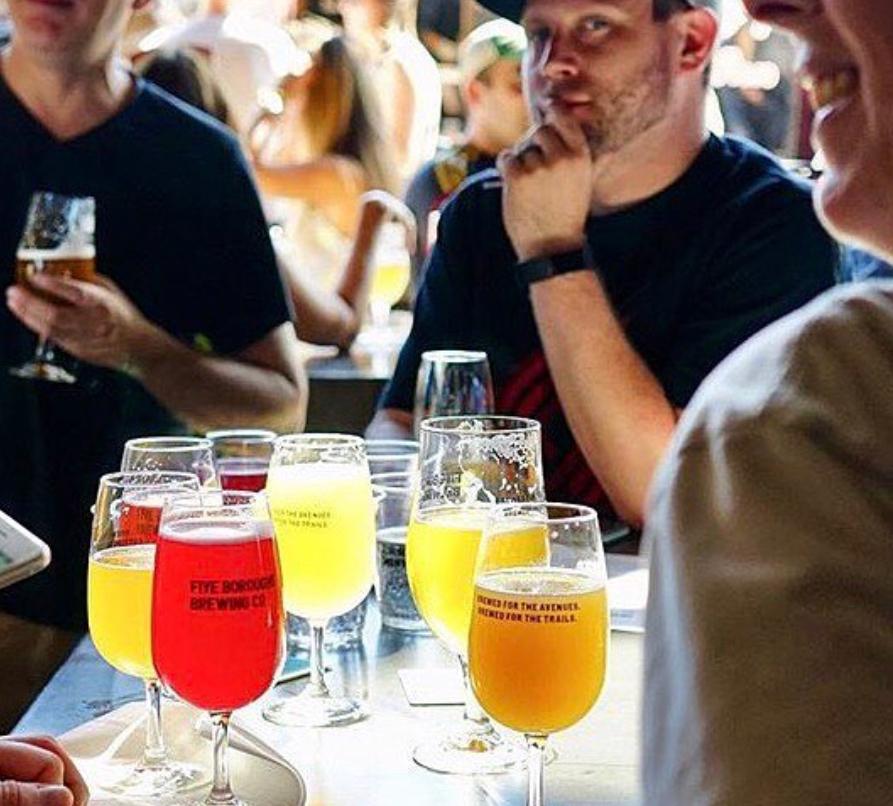 Impressive in every way, Five Boroughs boasts a gargantuan-for-Brooklyn space, high ceilings with beams painted in bright, bold colors, a thoughtfully approachable menu ideal for casual beer drinking, and a self-professed goal to get their beer in the hands of every beer drinker in New York City. Located a stone’s throw from Industry City, Five Boroughs gives Brooklyn residents another reason to head to Sunset Park.

Friends and families. Five Boroughs has a bright and inviting atmosphere, with ample seating for groups and a few kid-friendly perks like colorful hula hoops (which match the decor).

Refreshingly sessionable ales and lagers lead the charge here. Core beers include the Pilsner, crisp, clean, and bitter in the Czech tradition; IPA, a West Coast-style, East Coast-friendly IPA big on citrus aromas and flavors; and Gose, a lightly acidic, sour, and salty treat at a nice and low 4 percent ABV.

Start with one of the year-round core brands, like brewer Nick Griffin’s favorite, the Hoppy Lager. Then, venture out to one of the newer seasonal brews, like Insufficient Fare, a double dry-hopped Northeast Pale Ale that’ll make you forget all your problems with the MTA. 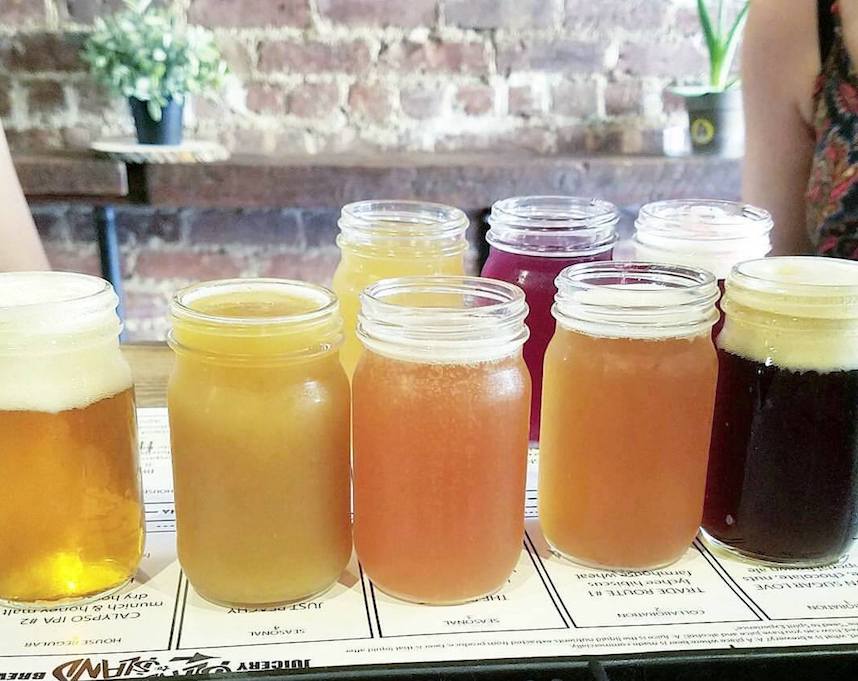 Island to Island is undoubtedly the most unique of Brooklyn’s new breweries. Inheriting inspiration from family recipes originating in Trinidad, crossed with the experimental beer spirit of Brooklyn and locally sourced ingredients from New York, owner/brewer Danii Oliver is turning grandma’s secrets into Brooklyn’s playground for the palate.

The adventurous spirit who is also health conscious and community-driven. Island to Island is built on healthy, homemade recipes using fresh, seasonal fruits, vegetables, herbs and spices in everything it creates, be it a beer, cider, kombucha or probiotic soda. Pregnant or abstaining? Try their House of Juice concoctions next door.

Styles are almost irrelevant here; brews span cider-beer hybrids, like Yuh Crazy, a “West Indian Red Ale” made with sorrel (hibiscus); grainless beers, like Island^2, whose water and fermentable sugar both come from sugarcane; and a few traditional ales mixed in, like Beer That Marlon Does Ordah, a “regular ass beer” named for a regular.

As of this month, Island to Island will be serving a Caribbean fusion tapas menu which co-owner Danii Oliver describes as “heavily plant-based with a few fish tapas.” Expect classic Caribbean favorites like codfish cakes, pholourie, jerk seasoned yucca fries, fried sweet plantain, and jerk channa falafel wrap with pickles, veggies and house-made channa patties—the latter of which is the most popular wrap they’ve ever served, Oliver said.

Mighty Sparrow IPA or Calypso IPA with the spicy jerk channa wrap; or on a blustery night, try the Haitian Hot Chocolate Porter with yucca or plantain fries. 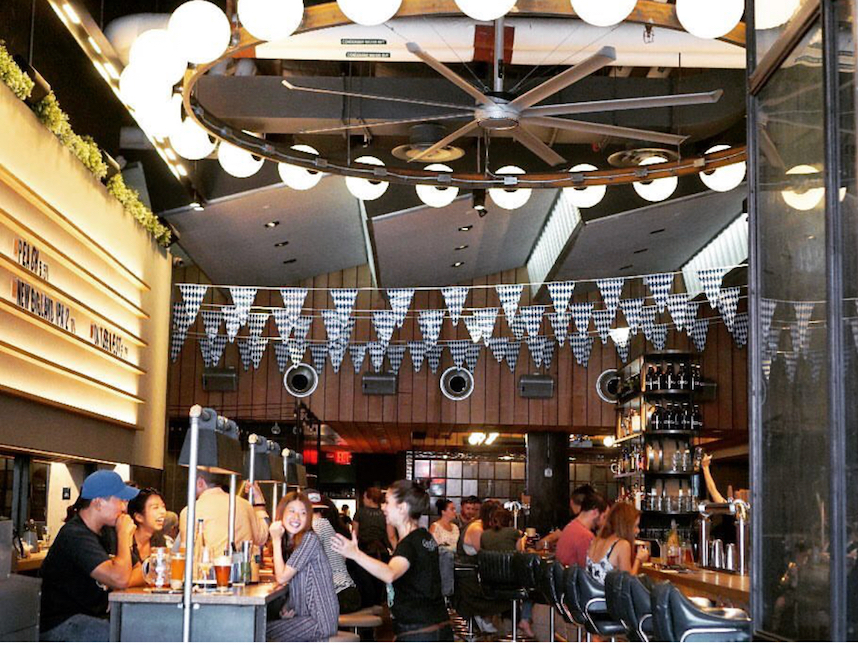 Owner Gerry Rooney gave pizza and beer a culinary lift at Circa, which pairs the brewing and baking skills of twin brothers, Danny Bruckert (formerly of Sixpoint Brewery) and Luke Bruckert (who brought his pizza slinging skills over from Little Oven Pizza in Portland, Oregon). In addition, Circa’s cocktail program, run by Damon Boelte (famed mixologist of Boerum Hill’s Grand Army) and its robust food menu make it a great place to fill up downtown.

Pizza fans and promiscuous palates. Circa’s beverage menu includes beers made on site as well as beverages from other makers, including ciders, funky farmhouse ales, and even Budweiser.

Pizza-pairing beers are best kept simple, and Circa’s lineup includes a Pilsner, a Brown Ale and a Berliner Weisse, all hovering around 4 percent ABV.

The cheese-gorging ‘2 Cows, a Sheep and a Goat’ pizza—mozzarella, Parmigiano Reggiano, pecorino, chevre—with Spiced Belgian Ale, a sweet, medium-bodied brew made with golden raisins and dates. 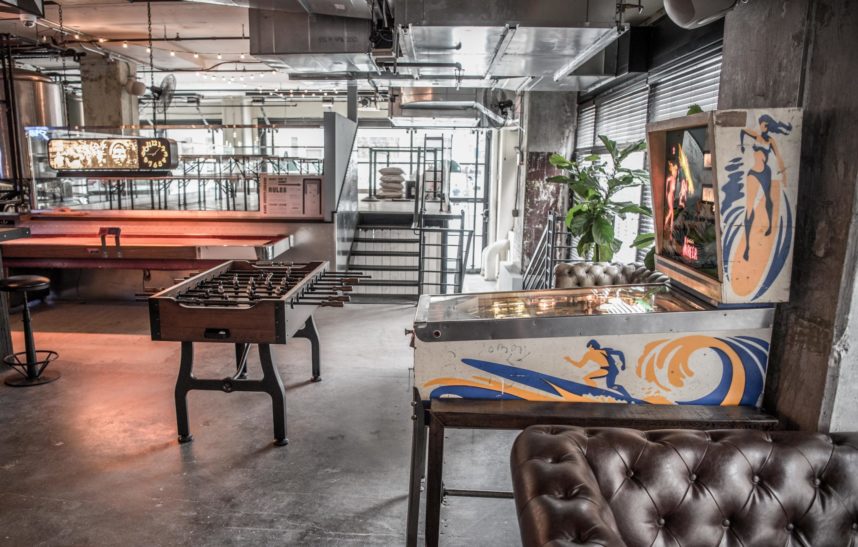 Piggybacking on its beer bars in NoLiTa and Williamsburg, Randolph Beer made its brewpub debut in DUMBO with flavorful, food-friendly ales and lagers ideal for enjoying with its elevated pub fare. Though the space was meticulously and thoughtfully designed, the real wow-factor here is the wall of self-serve drafts where you can pour beers yourself. Look for the big white letters reading: “BEER YOURSELF.”

The techie with a penchant for big beer selections; the tourist or freelancer in need of a bite, beer and an outlet; or a group looking to let off steam with self-serve tap beer, beer garden-style seating and pinball.

ESB, a light-bodied, dark-colored roasty ale; Saison, a spicy, fruity yeast-driven Franco-Belgian ale; and The Long Defeat, a pilsner brewed in collaboration with Long Island beer superstar, Barrier Brewing are great places to start, but it all depends on your mood and meal.

The Garden Burger (V) with herbed goat cheese and spicy guac with a Randolph ESB. The bitter, roasty notes of the light-bodied ESB cut right into the creamy goat cheese, marrying sweet toffee notes with funk. 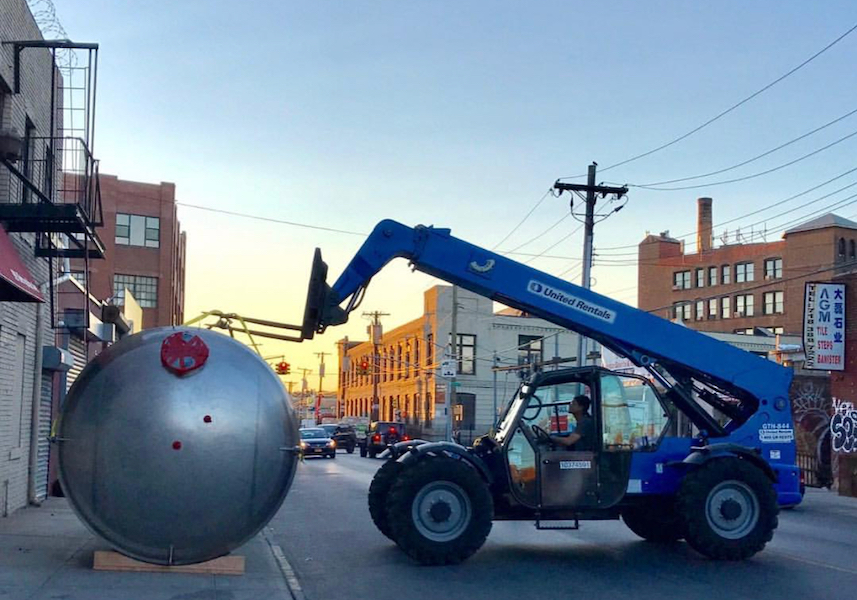 The 7,500-square-foot production space and taproom at Grimm Ales’ new brewery will hold a 30-barrel brewhouse, four 60-barrel fermentors, two 90-barrel fermentors and a portion of the floor space will be used to store over 200 oak barrels and foeders for wood-aged and sour beers. Photo: Grimm Ales

Grimm Artisanal Ales, led by co-founders and brewers Lauren and Joe Grimm, have together created a craft beer brand and liquid portfolio that has swept the beer geek nation. The famed duo will finally be opening the doors to their first brick and mortar brewery and taproom in early spring, with 10 beers on draft and Samesa serving food during taproom hours. Make a point to see for yourself what we’ve all been waiting for. Better yet, make it a brewery crawl—other favorites already in the area are Interboro Spirits & Ales and Kings County Brewers Collective, which opened in 2016.

Grimm Bros (the die-hard fans of Grimm who follow these beers wherever they go); artists and fans who appreciate quirky, whimsical design that’s also, sometimes, a little creepy; the craft beer curious who want to see what all the fuss is about. (The fuss was earned.)

Grimm is famed for their double IPAs (Power Source, Light Year, Zap, Pulse Wave, Lambo Door), but look past the haze craze for the latest in the Pop! series. Each new release in this continuing lineup of beers they dub “dessert Berliner Weisses” features an inventive mix of hops, fruits and other added ingredients—in the latest, Power Pop!, Citra lupulin (hop powder), Azacca hops, vanilla, and milk sugar (lactose) combine for a sweet and tart, soda-like experience.