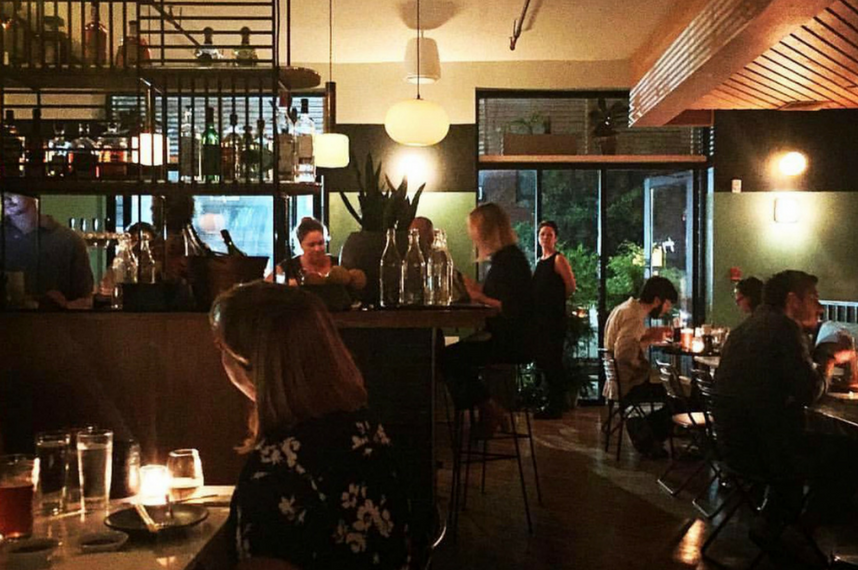 The low-lit casual atmosphere and on point vintage soundtrack make BarGlory ideal date territory, but make it a group outing and order one of everything. Photo: BarGlory

Here it is: my plump little dumpling sitting pretty in a pool of yogurt and deep green pistachio pesto, scattered with nasturtium petals and pine nuts, like a forest garden. It’s a beauty to behold, but I’m over that already, because I’m hungry, dammit. One bite in and I’m halfway through the dish and regretting I didn’t order eight. This is unlike any dumpling I’ve had before. I later learn it’s called a manti from Turkey with its thin, delicate skin, twirled at the top, and stuffed with the most tender morsel of lamb. One more bite and it’s over. I move on to my next singular dumpling: This one is a cumin-spiced pumpkin and ricotta affair, and it’s even better.

I’m in BarGlory in northern Greenpoint, an airy multilevel space attached to the trendily designed Franklin Guesthouse, though it’s very much its own entity. In the evening, the low-lit casual atmosphere and on point vintage soundtrack make this ideal date territory, but I recommend eating here with enough people to order one of everything, including the larger bowls and sharing dishes like the whole fried fish.

BarGlory opened August 2017 to little fanfare, letting its menu quietly speak for itself. It’s as much a bar as a restaurant with an impressive cocktail list and a focus on pet-nat wines—short for pétillant-naturel, naturally fermented, lightly bubbly and often cloudy wines, which are very much of the moment.

In this second restaurant from Sara Conklin, whose nearby Israeli hotspot Glasserie is a neighborhood favorite, she has again teamed up with chefs Eldad Shem Tov and Jeff Kouba, though they’ve shifted their focus onto these little doughy pockets of joy known as dumplings. 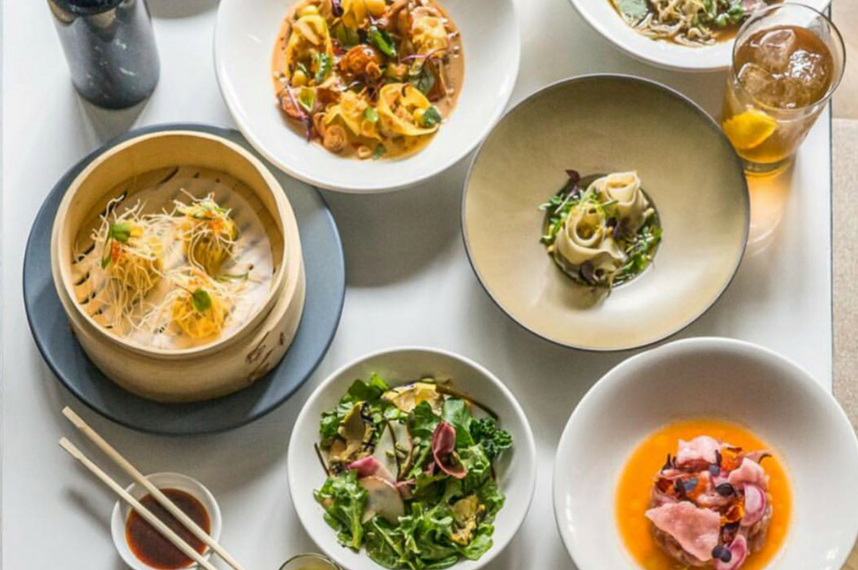 The dumpling is one of the world’s best-traveled dishes, with variations from the Ukraine (varenyky) to China (bao). Here at BarGlory the menu travels beyond the Silk Road, picking up flavors and lesser-known starches as its goes from Thai massaman curry dumplings with shrimp to Uzbek lagman noodles with foraged mushrooms.

Some of these references occur in a single dish, such as the larger entrée size lamb dumplings: the roasted vegetables, raisins and garlicky yogurt give it a distinctly middle eastern vibe, but the shavings of chili and spring onions take us right back to Southeast Asia. In their hands this comes off as neither fussy or pretentious, just delicious. To anyone familiar with Glasserie, this won’t come as a surprise.

Of course if I read this, a flashing “fusion” sign might go off in my head, causing me to turn up my nose. Fusion was given a bad name in the nineties by chefs offering questionable cross-cultural mash-ups which mainly seemed to involve putting wasabi where it wasn’t wanted. The important thing is for the guiding principle to be taste and expertise over novelty, and here BarGlory succeeds. Beautifully put-together food, rich with global influences, from the delicate scallops with black rice vinegar to the impressive onion jam and poppy seed bao. This continues into the cocktail menu which cherrypicks flavors from around the world from the Brown Bee with its bourbon and green tea to my favorite, the Stoned Soul Cocktail, with gin, apricot and turmeric.

There is a unique human desire to connect disparate things. Part of our creativity comes from our ability to think laterally; we want to be surprised, to have our expectations overturned. This is what they’re doing here, allowing us that experience of connecting the dots with each bite. Or maybe that’s over analyzing it and they’re just making really great dumplings.