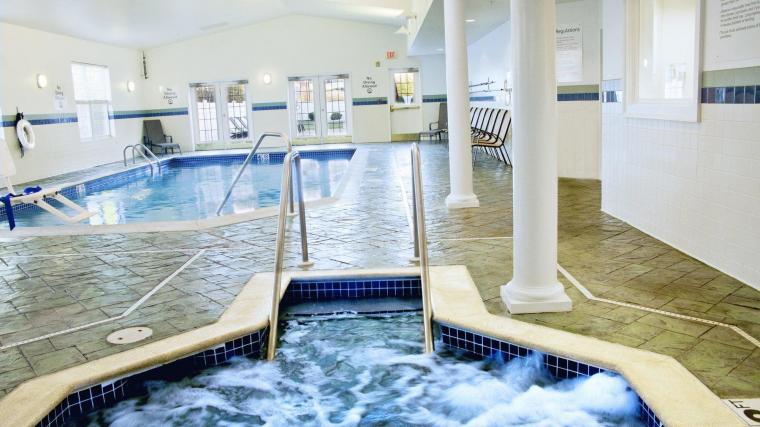 A three hour drive for this? Totally worth it. Photo: Holiday Inn Express

The appeal of winter has worn thin for me. It always does once we have logged enough hours inside, cooped up. Snowstorms are too far and few between to tire people out on sleds. Our family doesn’t ski, so that’s off the table. The “let’s jump from the couch to the coffee table and back again” game (with or without the threat of hot lava underfoot) drives me bananas, and watching Netflix or playing Minecraft all day makes me feel like I’ve failed as a parent. So in the face of an MLK weekend that I was going to be spending solo, while my husband visited friends in sunny San Francisco, I needed something, anything to do with the kids.

And then my cousin Allison texted.

She was wondering if I’d like to meet her mid-way between our homes, in a place where her little twins, and their older cousins—my boy and girl—could easily play. “The town of Amherst has an Eric Carle museum and cheap hotels with indoor pools,” she suggested.

She had me at indoor pools. I’d already been considering a trip to Spa Castle, but at $50 per person on the weekend, $150 seemed like an awfully big flight risk. (Not to be confused with an actual suspect who might skip town while on bail, I mean the risk you run, after spending an insane amount of money to entertain your kids, that said entertainment will only last about five minutes before they want to leave.) Of course, Spa Castle was about 40 minutes away. Amherst is around a three-hour drive. But three-day weekends are long, and we had lots of time.

We agreed to meet around noon. After a long road trip, particularly with her three-year-old cuties on board, it made double sense to skip the time suck of a restaurant and head straight to the museum for lunch. She warned me in advance that their cafeteria has only a vending machine and some complimentary coffee, so I stopped at the Shellburne Falls cafe on the way to grab substantial sandwiches, hot cocoa and cookies to go. 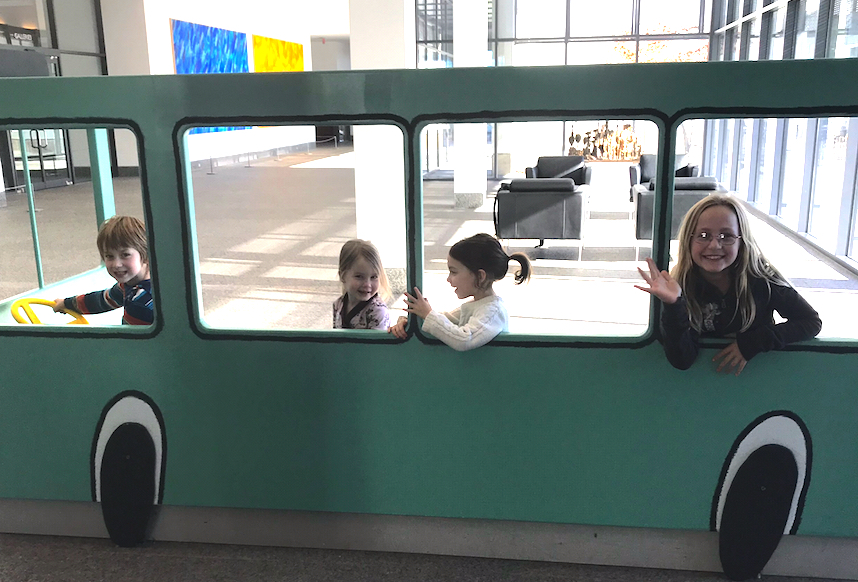 Not letting the pigeon drive the bus at the Eric Carle Museum. Photo: Nicole Davis

Then we toured this museum dedicated to picture book art, which, with its Mo Willems’ school bus and Eric Carle Caterpillar to hide out in, is really geared toward young children. But everyone enjoyed the art-making in their studio and perusing the main exhibition, a celebration of 80 years of the Caldecott Medal, with framed prints from illustrated children’s books spanning back to 1938. In the center was a little reading nook with a pile of this year’s nominees to read and vote upon, and before leaving we made the obligatory trip to the gift shop, which is really just a great children’s bookstore.

The trip’s main attraction lay back at the hotel, though. The Holiday Inn was the official weekend lodging for a kids’ hockey tournament, which sent visions of 13-year-old boys screaming and cannonballing running through our heads. But fortunately, there was an evening game, so we pretty much had the pool to ourselves. The twins splashed around in water wings, hitching the occasional ride from my daughter and watching my boy dog paddle, while Allison and I relaxed nearby in the seriously hot, hot tub.

It always amazes me when the amenities work in a hotel geared toward practical travelers (as opposed to vacationing families). Jacuzzis are likely to be out of order, towels in short supply. But everything operated as it should, and my daughter even made a new friend with a girl on a weekend trip to celebrate her ninth birthday. Her mom gave us a pro tip that the Children’s Museum at Holyoke was the bomb—her two- and nine-year-olds were so enthralled, she said, they had to pull them out after four hours. Four hours! It would open too late for us to check it out ourselves on Sunday, but we filed the tip for a future visit.

Because there will definitely be more of these “pool” overnights. Since the trip, I’ve gathered intel on all sorts of indoor pool experiences, beyond just Great Wolf Lodge. I’ve learned about Crystal Springs in New Jersey, and the much more modestly priced Doral Arrowwood in Westchester. (Indoor pools in New York City are limited to a few luxury hotels; the most reasonable seems to be a day pass at the Parker Meridian, which will run you $100 per.)

No high-end hotel serves a complimentary breakfast like Holiday Inn, though. With its pancake machine, bottomless Fruit Loops and cinnamon rolls, it’s like an early morning trip to the candy store. After some sugary carb loading, there was time before checkout for another swim and soak in the hot tub before we hit the road, relaxed and smelling of chlorine, just like summer.

Museums: The Eric Carle Museum of Picture Book Art in Amherst, MA is open six days a week, Tuesday through Sundays, except during July and August and school breaks. Admission is $9 for adults, $6 for kids. Find more details on exact hours on their site, carlemuseum.org.

The Children’s Museum at Holyoke is also open every day but Monday and admission is $8 for adults and children, free for 1 and unders. childrensmuseumholyoke.org

Lodging: Four of us stayed in a King Suite at the Holiday Inn Express in Hadley, MA, where rooms start around $135 a night. You could get a Queen Suite with a separate sitting area or adjoining rooms, too.

Dining: When it was time for dinner, everyone was appropriately exhausted, making the dinner choice easy: Applebee’s, right across the highway. You could find a much more charming place. For breakfast, for instance, Esselon came highly recommended, but arrive before 11 or be prepared for a wait.