One of the most romantic dinners ever, in our humble opinion, comes from a story in Jenny Rosenstrach’s cookbook, How to Celebrate Everything, about a woman who surprised her husband on their anniversary with a brown bag filled with all the ingredients to make the Thai food they ate on their first date. Of course they could have gone out to the same place. But cooking a special meal at home to celebrate an anniversary or a fictitious holiday like Valentine’s Day sounds way more enjoyable than eating out among strangers or a bunch of couples in love.

With that in mind, we’ve paired three movies about love and heartbreak with recipes inspired by the films. Whehter or not you’re boycotting this day altogether, all of these combos will be way more fun than take out. Two are easy to whip up after work, one you’ll want to save for the weekend and invite a bunch of friends over. Happy viewing, and bon appetit! 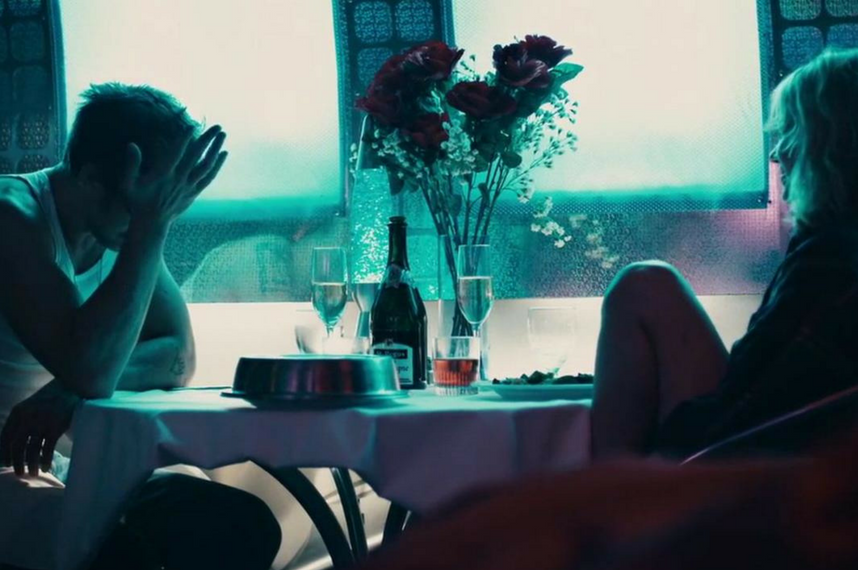 Film: Blue Valentine, directed by Derek Cianfrance, starring Ryan Gosling and Michelle Williams
Where to find it: On Amazon or iTunes, starting at $3.99 to stream
Recipe: Belgian waffles from Genius recipes; Bloody Marys from The Spruce

Ah, 2010. Sometimes it seems like a much simpler time. Unless, of course, there was one fateful day in February when you were like “hmmm, I feel like seeing a film!” and you went to the local theatre and got absolutely destroyed by Blue Valentine, and then it wasn’t such a simple time at all, really.

Derek Cianfrance’s well-reviewed romantic drama starred Ryan Gosling and Michelle Williams. It was a love story with a fractured timeline, and moviegoers sat there helplessly as they watched the duo go from young lovers in leather jackets and sundresses to a miserable, married couple falling deeply out of love.

So what kind of meal possibly goes hand-in-hand with a movie this sad? We’re thinking breakfast for dinner. And not just any breakfast, but a whole damn feast. A bowl of cereal? Yes, please, but make sure to go super old-school and get a box of Honey Comb’s or Cinnamon Toast Crunch, something reaaallly sweet and unhealthy, and make sure to have two servings so that all that extra milk you always pour in the bowl doesn’t go to waste.

Follow that up with a serving of homemade Belgian waffles (with a toppings station, perhaps?) and a pitcher of perfect Bloody Mary’s. You’ll be a little full, a little drunk, and plenty sad. Depending on the type of human being you are, it’s basically another Sunday afternoon brunch.—Regina Mogilevskaya 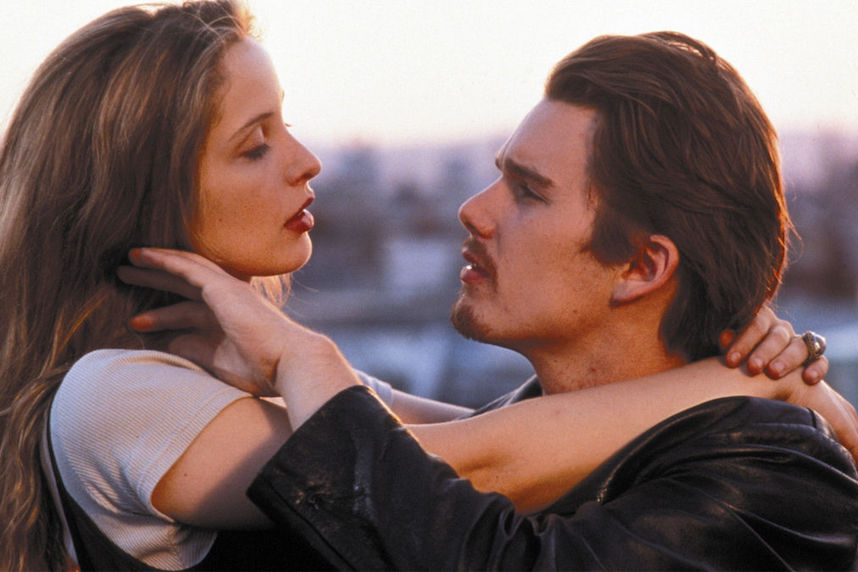 Film: Before Sunrise, directed by Richard Linklater, written by Richard Linklater and Kim Krizan, starring Ethan Hawke and Julie Delpy
Where to find it: On Amazon or iTunes, starting at $2.99 to stream
Recipe: Viennese Goulash from the Spruce
Bonus Recipe: Paula Deen’s Vanilla Milkshake from the Food Network

Two young strangers meet on a train. She’s Céline, played by the full-lipped, thoughtful, French actor, Julie Delpy, wearing a deliciously 90’s spaghetti-strap-dress-over-white-t-shirt look. He’s Jesse, a slightly greasy, 20-something American, embodied by Ethan Hawke. They decide to make their passing conversation last a little longer by spending a night walking around Vienna together. They fall in love with the city and maybe each other, and they wonder if they’ll ever meet again. Without giving too much away, this one-night infatuation gets more heft when you know that they’ll reconnect in 2004 to make the sequel, Before Sunset, and again in 2013 to release the third installment, Before Midnight. If you want somebody to commit to watching the entire trilogy with you, you’ll want to pair the first film with a really alluring dinner.

We recommend this soul-warming and hearty Viennese stew, which balances the sweetness of caramelized onions with an aromatic blend of juniper berries, marjoram, and caraway. Bright lemon zest and tangy cider vinegar cut the richness of the lean beef. If you can, plan ahead and prep the goulash a day in advance to let those deep flavors marinate like, you know, a long-simmering love affair. Serving 6 to 8, this could feed a couple with lots of leftovers—or it could satisfy a crew of beloved friends who’ve been crushing on Hawke and/or Delpy since 1995. And just in case a particular poetic moment in the film leaves you craving a milkshake, be sure to have your blender ready and some ice cream, vanilla extract, sugar, and milk on hand.—Kara Zuaro 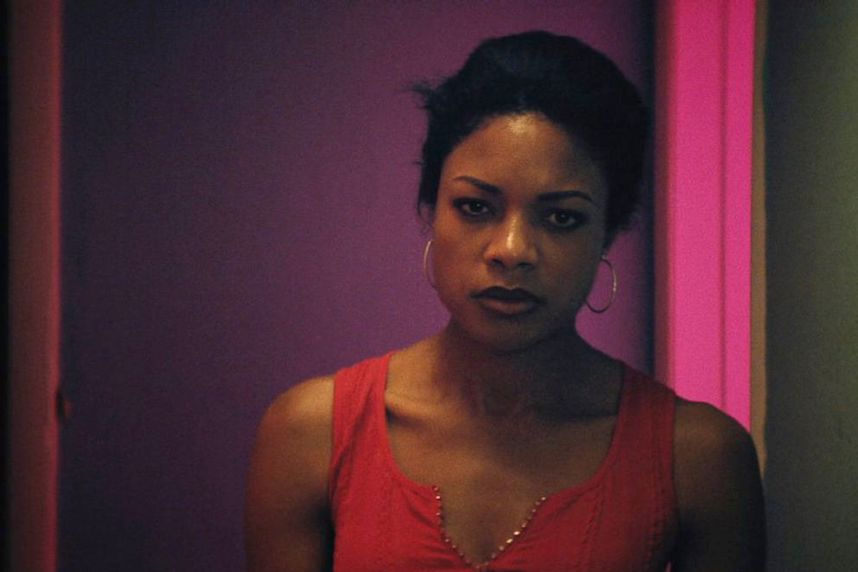 This 2016 breakthrough Oscar winner captures the pivotal periods in the life of a boy, Chiron, growing up poor in Miami. His mom is caught in the throes of addiction, but he finds real love and support from a drug dealer (who happens to be the person who ruins lives like his mom’s), and a friend with whom he is able to express his real self and sexuality. So, not a happy story, but one filled with moments of transcendence and beauty, as well as some truly striking cinematography.

The most touching, and gut-wrenching portions of the film are those in which we see Chiron’s mom (played by Naomie Harris in an Oscar-deserving role) choose crack over her son. We know it’s not by choice; she’s temporarily lost her mind and her bearings. But when she cleans up and tries to make amends, expressing her love for the adult Chiron,  whether or not he is receptive to it—god damn, it makes my eyes well just thinking about it.

Since Miami is home to the country’s best Cuban-American food, pair Barry Jenkin’s film this Instant Pot carnitas recipe. Yes, I know carnitas is technically Mexican, but this recipe calls for an easy mojo sauce that adds a perfect jolt of citrus without the hours of marinating time. (Be sure to fry the pork in a pan with chopped onions instead of roasting it afterward—it crisps up quickly.) If you don’t have a pressure cooker or the time to slow cook a pork shoulder, pick up thin pork chops and use the same mojo sauce, marinate them for a half hour on the counter or an hour in the fridge, covered, then fry in a pan. Make some white rice, throw together a can of Goya black beans and a can of Goya black bean soup in a pot (shortcuts, people: it’s a weeknight); chop up parsley or cilantro with onion for a garnish with a slice of lime, and you’re good to go. Add any tropical rum drink to the mix, or a glass of seltzer, mint, orange and lemon slices.—Nicole Davis