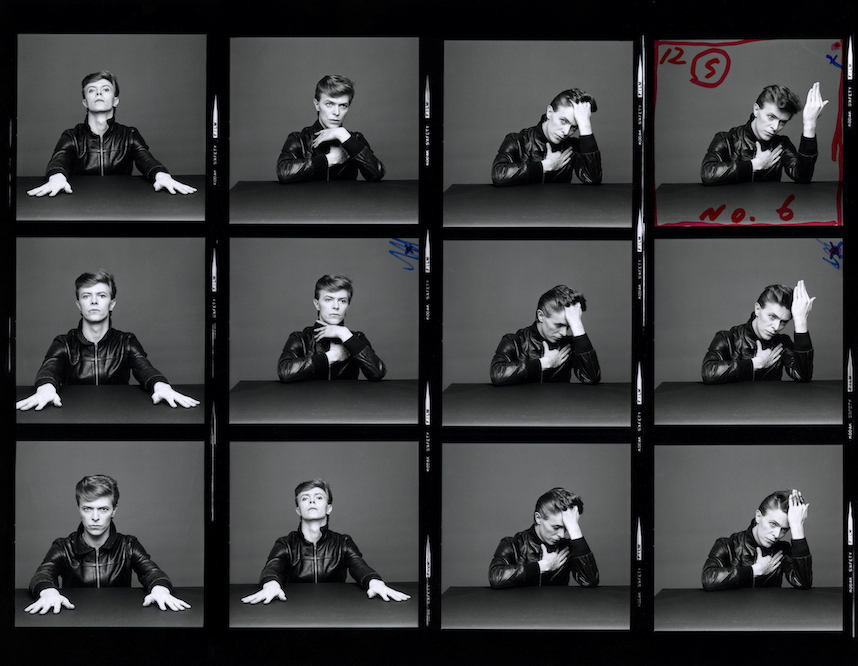 David Bowie’s “Heroes” period — from which this 1977 contact sheet comes — followed on the heels of various personas he’d  discarded, like Ziggy Stardust and The Thin White Duke. Some see this era as his most romantic. Photograph by Masayoshi Sukita. © Sukita/The David Bowie Archive

I was 20 when I first heard David Bowie’s The Rise and Fall of Ziggy Stardust, and though I was impressed with the album’s musicianship and lyricism, I didn’t quite get the ethos that drove it or why everyone worshiped the man responsible for it. Who, really, was David Bowie and why did he feel the need to manifest all of those alter egos? Why, in other words, was he so intent on pursuing change? It’s a question that will no doubt arise for the thousands of people who will visit the David Bowie is exhibition at Brooklyn Museum between now and July. As for myself—I’ve been considering it for some time.

A few months ago, in the midst of my obsessive sifting through his back catalogue (why I felt overcome by the desire to suddenly listen to all Bowie all the time I frankly do not know), I felt compelled to attend a guided meditation with Josh Korda from New York City’s leading Buddhist community, Dharma Punx. My knowledge of Buddhism has always been paltry at best, and as someone who was for so long a self-professed Nihilist, I felt as though the Dharma had little to offer me. But I was struggling and I was willing to try anything to attenuate my sadness and my anxiety, so I went, and on my way, chose to listen to Hunky Dory. That’s when I finally heard it. Words like bardo and death’s release and great salvation sprang forth and I had this curious feeling that Bowie had more to offer me than I thought. When I plugged Bowie and Buddhism into my search engine, my suspicion was confirmed.

Bowie, in fact, possessed an abiding interest in Buddhism his whole life. And suddenly, upon learning this, his whole chameleonic host of alter egos from Ziggy Stardust and Thin White Duke (Man Who Sold The World) to Halloween Jack (Diamond Dogs) and Aladdin Sane made perfect sense. Set on vanquishing the purportedly separate self in order to attune to boundlessness, Bowie was simply manifesting (in his own Bowie way) anatta, which is a central doctrine of Buddhism that rejects the existence of an “eternal, essential and absolute something called a soul, self or atman.” And how fortuitous that my own interest in the Dharma happened to coincide with my burgeoning interest in Bowie, a man who was thoroughly captivated by it.

As a result of his initial intrigue, which was prompted by his stepbrother Terry introducing him to Jack Kerouac and that whole band of West Coast beatniks who were themselves fueled by Eastern religions and philosophies, young Bowie became a student of Tibetan lama Chime Rinpoche. But upon discovering that Bowie’s true passion, and thus salvation, lay elsewhere (namely music), Chime encouraged him to pursue it and pursue it he did. Deeming himself a “mid-art populist and postmodernist Buddhist surfing his way through the chaos of the late 20th century,” Bowie never became a Tibetan monk. He never even renounced pleasure and wealth in favor of an ascetic existence. But what he did do was spend the rest of his life adhering to many of Buddhism’s core tenets, such as nonself and impermanence, allowing them to inform both his artistic practice and his person.

“Transience and change…became fundamental to my life and my approach to it,” said Bowie when asked about his interest in the Dharma. “And not holding onto anything. Not considering that there is anything that will last through one’s entire eternal life, living or dead, makes letting go very easy, material things or physical things. And looking for the source of one’s own being becomes more important.”

Here’s the big takeaway: Bowie didn’t settle on one practice or school of thought and call it a day. There was, according to him, Nietzsche and Satanism and Christianity and even pottery, but it was Buddhism’s core tenet of change as a fundamental part of the nature of life and the human experience that ultimately drove him. “I haven’t a clue where I’m going to be a in year,” he said after Station to Station was released in 1976. “A raving nut, a flower child or a dictator, some kind of reverend—I don’t know. That’s what keeps me from getting bored.”

Like a ragpicker, he would take bits and pieces from all over the place, carry them around for a time, and then graciously cast them aside when he felt like they served their purpose. Whether the audience got off on it or not, Bowie was set on recasting his image and persona whenever he felt the mounting urge to do so, and this urge came around often because he made a conscious decision again and again and again to be a part of things that were living, and thus changing. And isn’t that what art is? Isn’t that freedom? 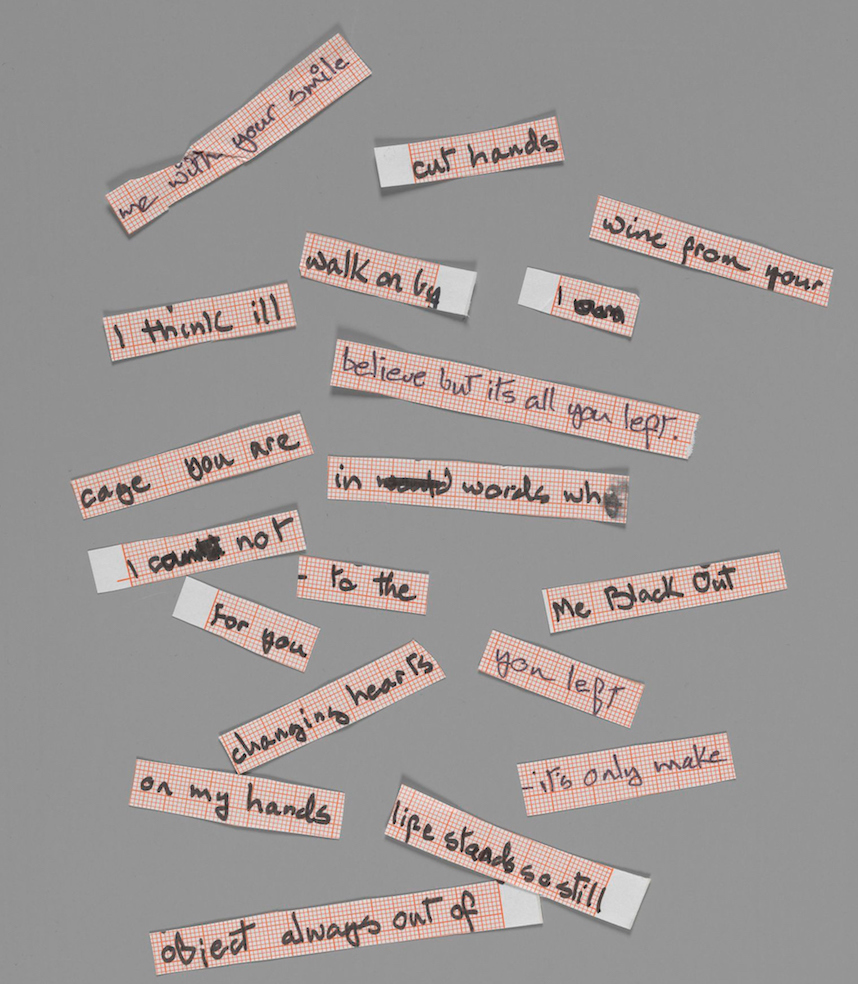 “I’m not really very academic,” he said on The Dick Cavett Show in 1974, “but I glit from one thing to another a lot.” If Bowie saw an audience member with a cane and he dug it, he’d get one for himself. If he stumbled upon a technique that appealed to his changeling sensibility like William Burroughs’ Surrealist cut-up method, he’d employ it. If he found a work of post-apocalyptic literature that struck him (namely 1984), he’d glam rock the hell out of it and make it into Diamond Dogs. These are the weird and wonderful things that could happen when someone comes around to, and accepts, the notion that change is part and parcel of life and no one or thing is impervious to its rattlings. And Bowie did that in spades.

When I was talking to my father about Bowie and why I admired the man, he felt it incumbent on him to tell me, in typical Dad fashion, about the dangers of a free-style approach to life and art. “It might be great for Bowie,” he said, “but in a non-Bowie individual it can be hazardous to your health.” That’s a moderately fair assessment seeing how we’ve still got to contend with reality. But it’s also vaguely, lovably ludicrous. Bowie wasn’t always Bowie. He, too, was a “non-Bowie individual” and with or without celebrity, with or without cachet, he was probably going to dedicate himself to the strange, the weird, the subversive. And beyond that, he was probably going to dedicate himself to those precepts of Buddhism regarding nonself and impermanence as he doggedly sought that thread that bound him to the universal order.

Bowie didn’t have all the answers and I’m not trying to deify the man because he is, after all, just a man, but what he did on his path of discovery toward his own salvation was extraordinary. And he packaged all that shape-shifting insight into 27 studio albums that we could spend the rest of our lives imbibing, loving, and rediscovering. For someone whose whole modus operandi was one of impermanence, Bowie left a pretty enduring impression on our collective pop cultural conscience. But just as you can’t step into the same river twice, you can’t hear the same thing twice, can you? And so Bowie, I imagine, will continue to change well after his bodily death, just as he would have wanted.