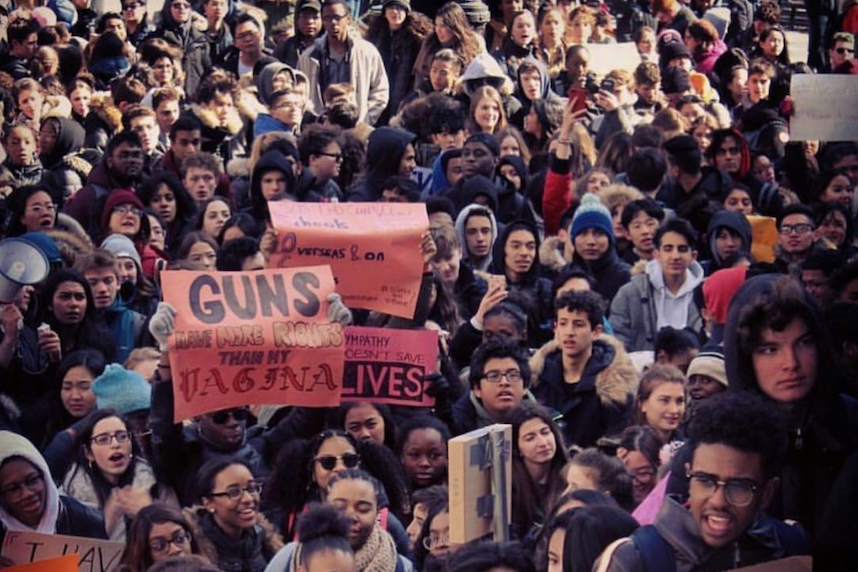 It took just a few teenage survivors of the mass shooting at Marjory Stoneman Douglas High in Parkland, FL, to initiate the March for Our Lives in Washington, D.C. this Saturday, March 24. Once the date was set, over 700 “sibling” marches sprung up in cities around the country and world, including New York City.

When you consider that these demonstrations were organized by students and their adult allies in about a month—half as much time as the first Women’s March—it’s inspiring to think how much further these teens will be able to carry the gun control movement, which has never been as mobilized or as strong as it is right now.

“I’m a grad student—I’m 23,” said Columbia Law student Julia Ghahramania, the Deputy Director and Press Liason for the NYC March for Our Lives, “and I don’t think when I was 16 or 17, I would have been as passionate or eloquent as these students.”

The message these protests will be sending on Saturday reflect what the majority of Americans want: for politicians to finally enact tougher legislation to curb gun violence.

To truly show our support for this student-led movement, it’s incumbent upon us to stand with them on Saturday. If you’re headed to D.C. you probably already have your trip planned. Here’s what to consider if you will be in town this weekend, and able to join the March for Our Lives in New York City.

So far there are 13,000 registered, and 26,000 “interested in” the New York City march on Facebook. At a press conference last week, the student organizers estimated that at least 30,000 would be coming to show their solidarity. Ms. Ghahramani predicted the headcount could go as high as 100,000. This should be easy to achieve. 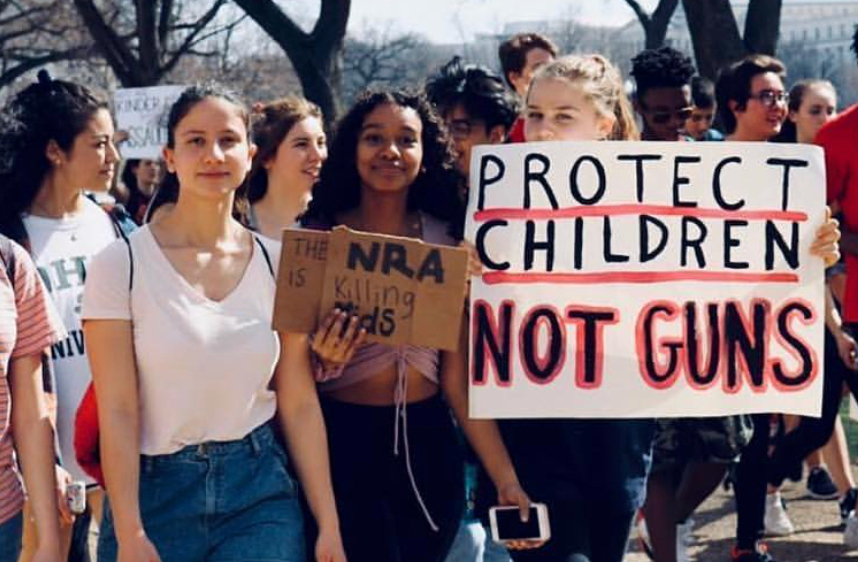 If you originally RSVP’ed on Facebook, there is a new formal registration page here, which everyone is encouraged to use.

The route follows this year’s Women’s March route. The entrance is at 72nd Street and Central Park West, and opens at 10am. No politicians, notably, will be speaking. Just students and educators who have been affected by gun violence, including three Parkland survivors, an educator from Sandy Hook, and the founder of the youth-led violence awareness organization Project Orange Tree, who will take the stage at 11am for a rally at Columbus Circle, followed by a music performance. Then the march will continue east on Central Park South and continue south down Sixth Avenue until 43rd Street.

If you came late to the Women’s March last year with kids in tow (as I did), you know how strict the NYPD was about letting people enter mid-route. You could attempt to talk your way into it, or simply start at 72nd St. Depending on crowd size, the NYPD may move the entrance further north to 79th Street and Central Park West after the march begins. 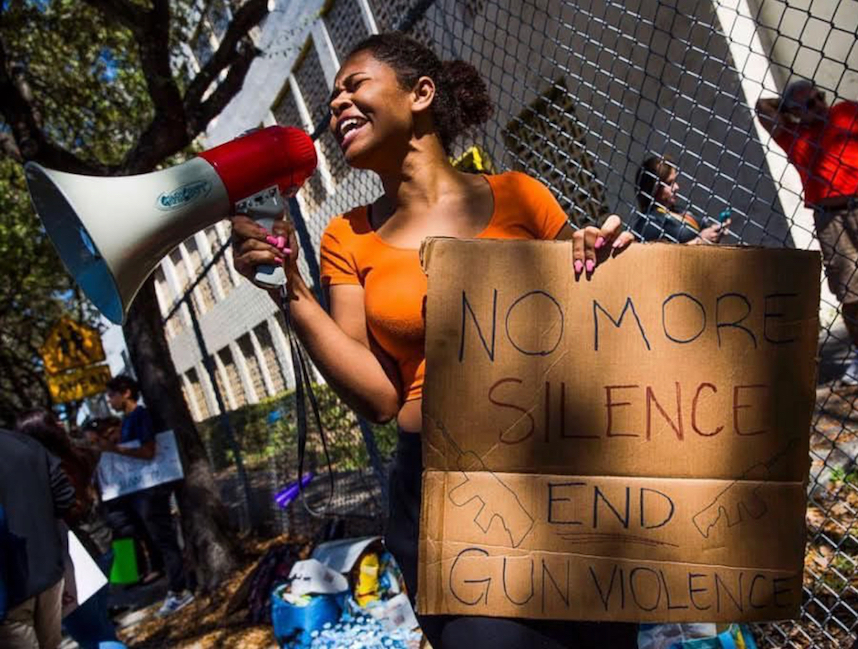 Should I bring my little kids?

This is the hardest question of all for a parent of an elementary school kid who has yet to grasp what all those lockdown drills at school are really for. You don’t want to scare them silly by informing them that people have killed kids in schools. It’s heartbreaking to even think about that conversation, let alone have it. But you don’t need to get that specific.

The Washington Post has a good article that lays the groundwork for this kind of talk. In essence, the various experts interviewed all advise that it depends on your child and how mature they are for their age, a sentiment echoed by Dr. Alison Locker, a clinical psychologist specializing in early childhood who is part of the practice, Little House Calls. I asked her about my own situation: My 9- and 6- year-old have not even heard of Parkland yet. So how do I break it to them if I bring them?

She advised to keep the conversation simple but not detailed, and stress above all that adults are working hard to keep them safe.

“I do think it’s important to acknowledge that this is a march against gun violence, but I would focus on civic engagement rather than guns,” Locker wrote in an email.

For my older child, she recommended saying something along the lines of, “‘There are different kinds of marches (like the women’s march if she remembers that), and this march is about making sure people are safe from guns. Some people have been hurt when there aren’t strong enough rules to keep everyone safe from weapons. It’s really important to show how much we care about having rules for everyone so that weapons aren’t used in bad ways to hurt people. There are so many grown-ups who are working to keep you and all of us safe, and we want to make sure that everyone all over the country feels safe too.'”

If this talk prompts questions about whether any kids have been hurt by guns, she said to say yes and then follow up with more reassurances. “Something like ‘Bad things happen, but all the grown-ups around you work very hard to make sure you’re safe. We are marching to try to make sure no bad guys get guns to hurt people.'”

For my six-year-old, she recommended keeping things even more basic. “I would keep the explanation to one line, like, ‘We are going to a march to show that we don’t want any bad guys hurting people. When we all go together in a big group it shows how important it is.'”

Ultimately, the thought I keep circling back to is: My children are old enough to be killed in a school shooting. Shouldn’t I involve them in a movement that directly concerns them, and could save other children’s lives?

The power of showing up with kids at this march, despite all the logistical and emotional hurdles you need to jump, reminds me of a passage in Rebecca Solnit’s Hope in the Dark, where Dr. Benjamin Spock explains how he became an activist against nuclear weapons. It was seeing a small group of women protesting on behalf of Women Strike for Peace in the rain at the White House that swayed him. “If they were so passionately committed, he thought, he should give the issue more consideration himself.”

Hopefully, this is the effect students are having upon politicians who have yet to respond to other urgent pleas for gun control. These kids are the wake-up call we need, and the one we need to support by any means.

My other thought is: I don’t want to scare my kids, and I can protest the same exact thing without them. Maybe I’ll just carry their signs, or their artwork, on mine. Seeing these pre-designed posters for the march makes me think that Saturday’s imagery and messaging will be a tad too real for them to witness.

There are a lot of organizations fighting for common-sense gun control, and all can use financial support to continue their outreach and lobbying, like Everytown, Moms Demand Action, March for Our Lives, Guns Down Life Up, and Gays Against Guns. Find one you connect with.

You can also donate to voter registration activists, two of which will be at the march on Saturday: The League of Women Voters and Headcount.

Last year the House passed the Concealed Carry Reciprocity Act, which would make states with strict gun laws like New York honor the lax standards of say, Florida, and allow out-of-staters to carry a concealed weapon without any of the safety measures, like a gun permit, that our own state requires. (This guide from Indivisible shows how every Representative voted.) It’s due for a vote in the Senate, but its passage seems unlikely.

In New York’s own state Senate, however, Republicans have control in part because a coalition of Democrats called the Independent Democratic Conference casts their votes with the GOP. The state Assembly just passed a package of gun control measures that is not expected to pass in the Senate, so in the short term, you can pressure your local state Senator to support these bills, and in the long term you can help oust all the IDC Democrats in November by voting in the midterm elections. Joining a local activist group will keep you informed and engaged throughout the year, leading up to the crucial midterm elections, and we have a handy guide to finding the one for you.

This story was updated on March 21 to reflect the correct title of March for Our Lives NYC’s Deputy Director, Julia Ghahramani, and the details of the speakers at the rally.