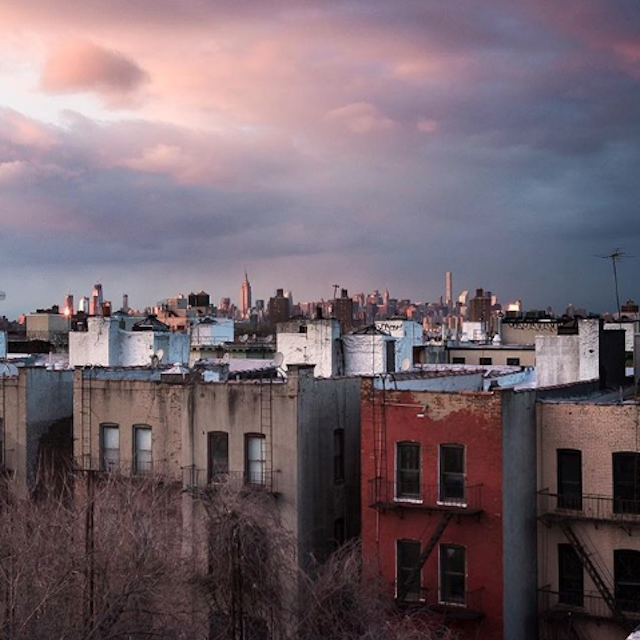 Crown Heights, a neighborhood with coffee shops that brew their own beans and a bar that serves Brooklyn-made wine, is the perfect place to hang from morning through evening. photo: @whitelightening11

Calling in sick from work is an art form. You’ll need to spend the day wisely. Sleep in, and then do something you wouldn’t normally be able to do on a weekend. For instance, spend the day in Crown Heights. Our pre-scouted itinerary includes one important tour that only happens during the week.

With its mix of historical sites, boutiques and trendy eateries, Crown Heights is straddling the detriments of gentrification and the preservation of small, local businesses. The 1991 riots, fueled by racial tensions, followed this neighborhood for years, but today, apartments here are in demand for their somewhat reasonable rents and a vibrant community that offers West Indian delicacies, kosher bakeries and sleek wine bars. Spend a weekday here playing hooky, crisscrossing the neighborhood for museum tours and happy hours. You’ll understand why this has become a destination for Brooklynites craving culture without the ubiquitous sterile food halls and high rises. 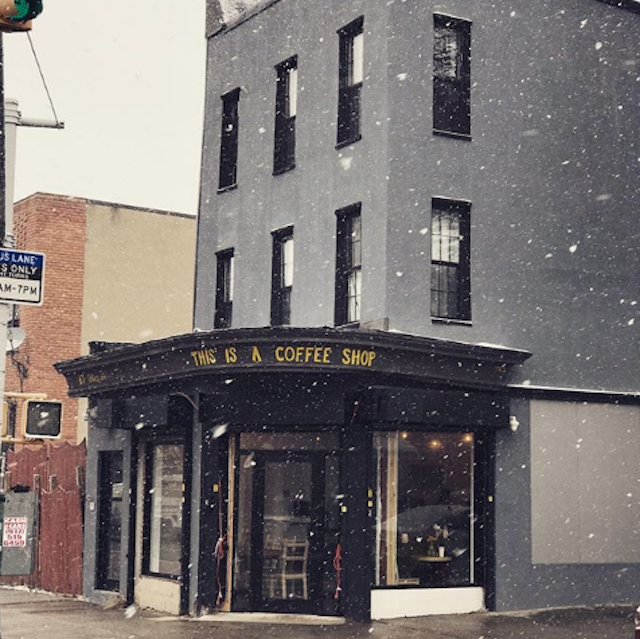 Everyone knows that the perfect day begins with brunch. Dean Street Cafe (not to be confused with Dean Street tavern in Prospect Heights) opened last year on a stretch of Utica Ave. near the A, C Utica stop that is begging for commerce. If you’ve taken the train here, you’ll be as happy to see the sign “This Is A Coffee Shop,” as a rabbit in front of Mr. McGregor’s garden patch. Dean Street has the feel of a cool neighborhood spot where you’ll want to linger, read or chat over Avocado Toast or an Egg and Cheese on a Pretzel Bun. While you caffeinate and eat, why not read the NY Times, that novel, or something else that you usually don’t have time for? The coffee, in true Brooklyn spirit, is roasted in-house, small batch, and labeled as Crown Heights Roasting Co. Many of the pastries are made by the owner’s aunt: chocolate croissants, biscotti and chocolate chip cookies. Everything has the benefit of being certified kosher. The hours operate around the Jewish Sabbath: Mon-Thurs: 7am-4pm, Fri: 7am-12pm, and Sun: 8am-6pm. 87 Utica Ave., Crown Heights 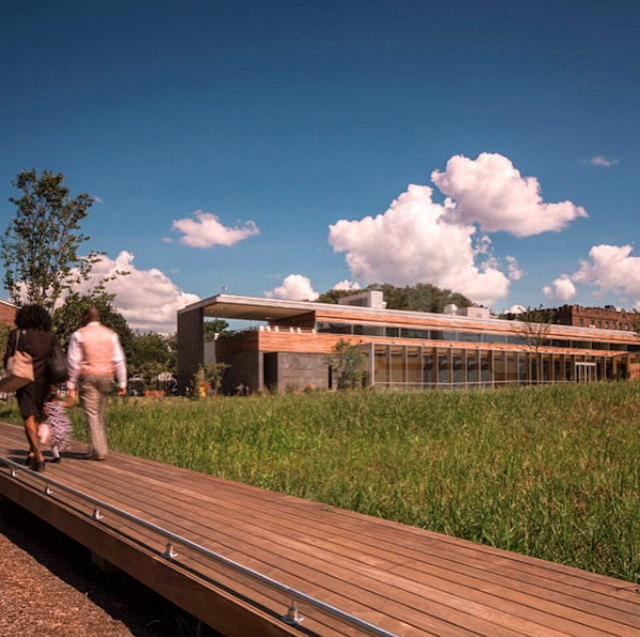 The reason why Weeksville Heritage Center doesn’t draw in the same crowds as the Tenement Museum probably comes down to timing. Its location is a little out of the way, and their walk-in tours are only available Tuesdays through Fridays at 3pm. (They are not open today, March 21, on account of the “Four’easter”.) That said, this historical site is well worth the time you make to visit it. In 2014, a sleek, new, 23,000-square-foot Education and Cultural Building opened to the public, glowing with glass and stainless steel in a neighborhood that could soon become a Museum Row with the Brooklyn Children’s Museum, Jewish Children’s Museum and Brooklyn Museum all in walking distance.

Weeksville was an independent black free community in what is now Crown Heights and parts of Bedford-Stuyvesant, and is named after its founder, James Weeks, who bought the land in 1838, only 11 years after slavery officially ended in New York. The neighborhood of Weeksville was a self-sufficient community with churches, schools, and a variety of other black-owned businesses. Only four historic homes of Weeksville (along with many artifacts) are still standing today. After paying $8 to get into the museum, a tour guide will share with you how a history professor at Pratt rediscovered the community, along with the students in his class, through an archeology dig. You’ll ooh and aah over the 1860s single floor double house, peeking outside the kitchen to the outhouse in the back. You’ll leaf through the replica of The Freedman’s Torchlight, the Weeksville newspaper. You’ll learn of turn-of-the-century technological advances in the 1900s structure, and then be mesmerized by the enormous 1930s house that would fit at least four or five current new apartments. In these types of museums, history comes alive, and Weeksville is a powerful reminder of a little-known aspect of Brooklyn’s heritage and Emancipation in New York. 158 Buffalo Avenue, Crown Heights 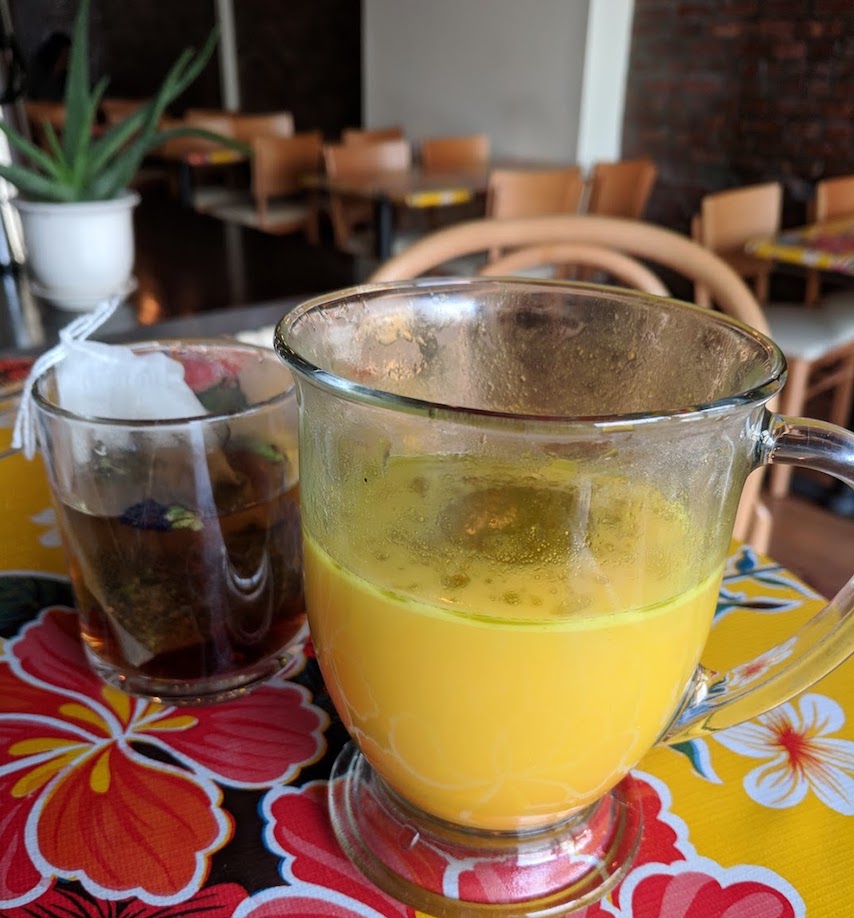 After your tour, ponder the history of Weeksville over a medicinal tea at Tamra Teahouse. It’s too early for dinner at this Asian/African cafe, which opened in January. But you can order a relaxing, Holy Basil Tea or Turmeric Latte at the counter, and sip it while you decide if you will brave the 25-minute walk to Bedford Ave and the rest of the stops on your Crown Heights tour, or if you will just wimp out and call a car. 1524 Bergen Street, Crown Heights 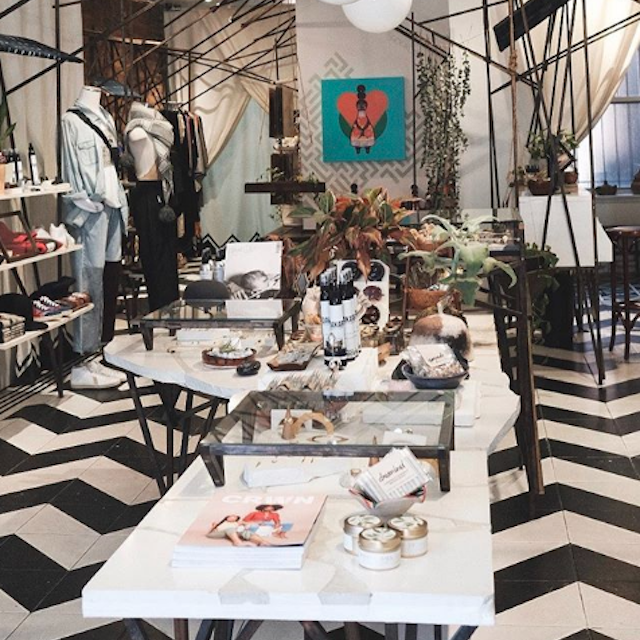 From Tamra, it’s a 25-minute walk to Bedford Ave., worth a stroll on a beautiful day, or a car service if you’re feeling sluggish. You may be thinking it’s almost cocktail hour, but it’s worth spending a little time shopping first, knowing that drinks are on the agenda. At Bedford and Park is Marché, a “cultural concept shop” that stocks curated vintage clothes, jewelry, spices, home goods and imported coffee. The bright space, which acts a sister shop to the French-Senegalese bistro, Café Rue Dix, is a design dream with all different wares ranging from lavender cigarettes, a Pierre Cardin vintage parka, sparkly socks and trendy shoes. It’s the type of place you’ll find your new favorite gold ring, everyday sandals, or a new aromatherapy oil that you suddenly can’t live without. 1453 Bedford Ave., Crown Heights 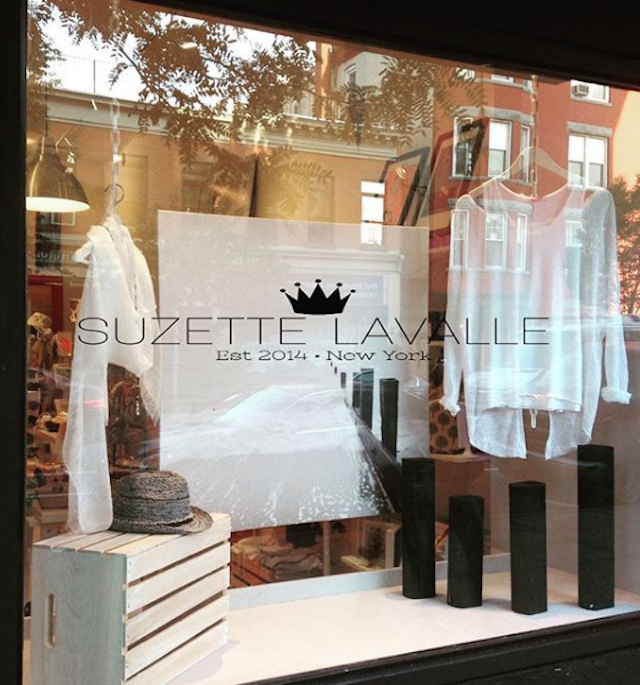 Walk over to Franklin Avenue, and stop at this easy-to-miss gift shop where Suzette herself will greet you from behind the counter, and point out her newest arrivals. The store just celebrated its three year anniversary, and with nooks and crannies overflowing with jewelry, sketchbooks, candles and sunglasses at reasonable prices, you can see what makes her customers keep coming back. It would be hard to imagine a person coming in here and not leaving with something, even if it’s just a smile from Suzette and some uplifting conversation. 726 Franklin Ave., Crown Heights 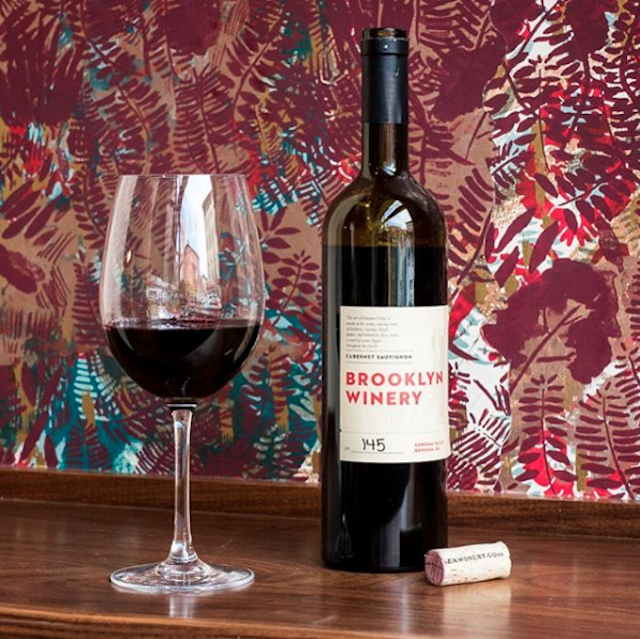 It’s finally time to drink, and there are so many bar choices in Crown Heights, you could go to any one of them and be content. For instance, you could pass an entire afternoon playing skeeball at Franklin Park. But the happy hour at BKW is going to give you $7 Brooklyn-made premium small-batch wines, providing you the unique experience of actually having a taste of the borough. Head down Franklin Avenue, to find the minimalist outpost of the original Brooklyn Winery in Williamsburg. Sip at a Cabernet Franc from the Finger Lakes or a North Fork Blend and talk loudly about “depth” and “complexity” while smirking at your friends. Or just quiet down and learn a thing or two from the knowledgeable bartenders who are passionate about their wines. 747 Franklin Ave., Crown Heights 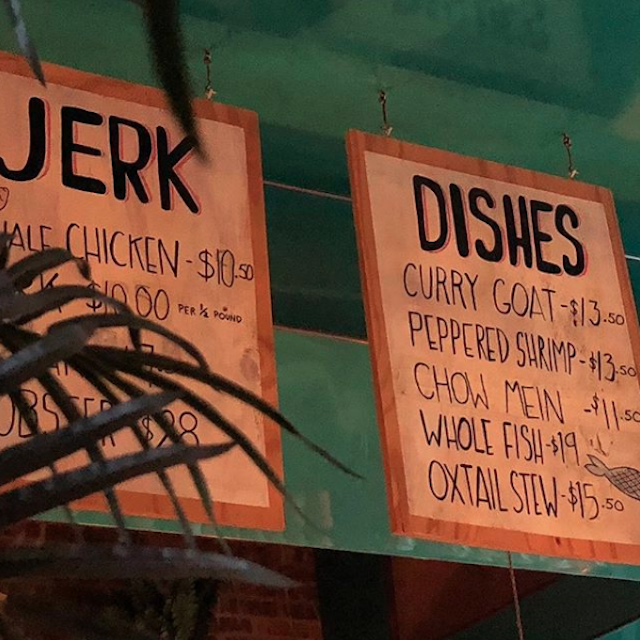 The neighborhood has some exciting food options like The Food Sermon or Mayfield, but today is the day for Glady’s. When I was in Montego Bay, Jamaica, I ate, with a friend who grew up there, at Scotchies, a roadside jerk joint where the chicken was smoked in the open air. We sat perched on empty keg cans under a thatched roof, gobbling a tinfoil portion of spiced meat, a few sides, and a frostbite-cold Red Stripe. There was reggae playing and we both had bare feet. This is what I want for you tonight. Glady’s in Crown Heights comes close enough (but the chef also has a pedigree that includes Per Se, Insieme, Annisa and Franny’s). An aquamarine interior, reggae on the speakers, and an open kitchen where a wood burning stove smokes merrily sets quite the scene. Order a round of “festival” for the table: this fried cornmeal fritter is only slightly sweet and good eaten piping hot. You’ll order your jerk by the pound, preferably with a side of rice and beans and greens. You can ask for things to be spicy or mild, but regardless, you’ll probably want a rhum slushie to wash it down with. 788 Franklin Ave., Crown Heights 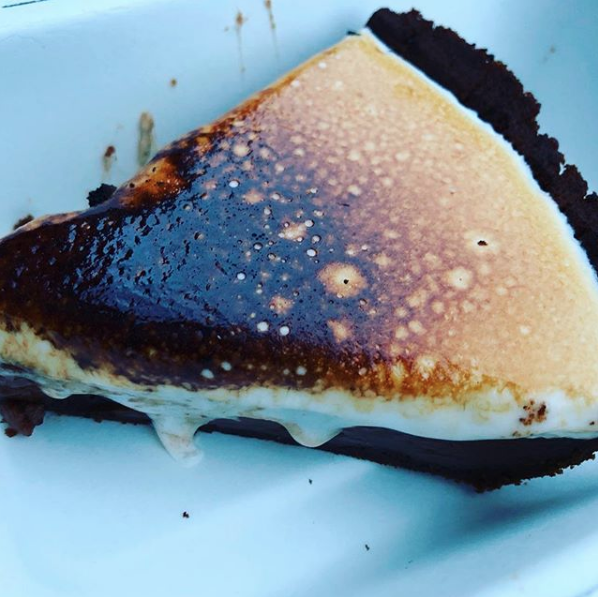 There are very few female run restaurants and bars in New York, never mind female owned. Butter & Scotch is one of them, with a list of feminist cocktails, each of which includes a $1 donation to Planned Parenthood in the price. In terms of decor, think East Village circa 1999, with a slightly DIY vibe and mod booths where you can see yourself falling into one with a stranger, late at night, after too many shots of Bulleits. But not tonight, because you’re here for the dessert. A Unicorn Treat is nothing exciting, just a butter cookie with rainbow sprinkles. Instead, really go for it: a classic hot fudge sundae with whiskey peanut butter and cookie bits or a slice of S’mores Pie that will give you a grown-up taste of a childhood favorite. 818 Franklin Ave., Crown Heights 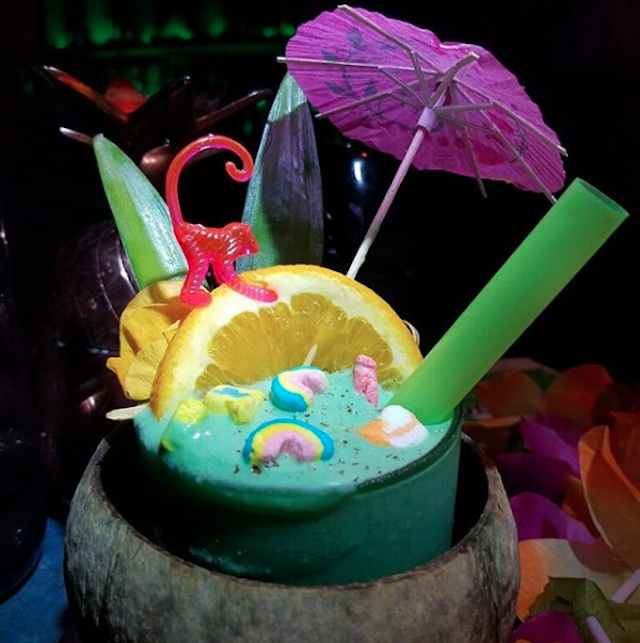 It’s been ten hours in Crown Heights and now it’s time to go home. What’s that? One more drink? You’re close to the 2,3 subway. You’re buzzed and on a sugar high. You’ve ingested your weight in jerk chicken. Plus, it’s a weekday! Well, if I can’t talk you out of it, let me at least point the way. Walk back up Nostrand Avenue where you can continue the sweet island vibes and stumble into two different tiki bars: King Tai and Super Power. Sure, you can get an umbrella in your drink and dance all night, if that’s what you want to do. Take a car home, don’t forget to drink water, and call me tomorrow so I know you made it to work. King Tai, 1095 Bergen St. at Nostrand, Super Power, 722 Nostrand Ave., Crown Heights