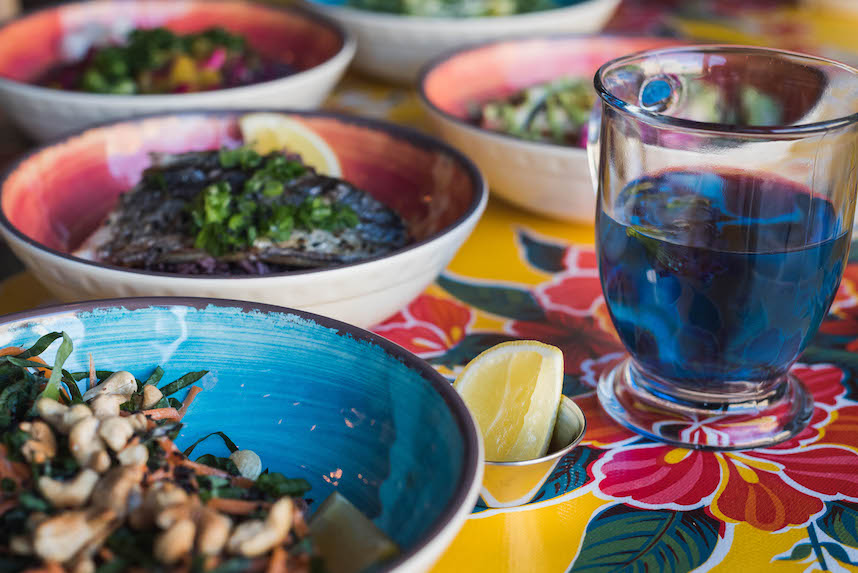 Yunha Moh, one half of the team behind Tamra Teahouse in Crown Heights, has some practical reasons for making medicinal teas such a large part of his menu.

“Being a working-class immigrant with no health insurance, tea helped a lot,” says Yunha Moh. “It’s a lifestyle and big business in Korea and Japan.”

Since its debut back in January, the restaurant has boasted rave reviews on Yelp and Google, thanks to its medicinal teas and Asian-African fusion menu.

Started by Moh and Draman Berthe, Tamra Teahouse began as a pop-up two years ago, sprouting throughout Brooklyn before opening a permanent location on 1524 Bergen Street, in a less gentrified area of the neighborhood. Many of the medicinal teas hail from Moh’s native Korea.

Among Tamra’s best-known tea is Korean Citron. Made from Yuja citrus fruits, this one is good for sore throats and sinuses, something many might need as winter comes to a close.

Then there’s Cornsilk Tea, which is the silk from the corn that is good for blood circulation. “It’s very popular in Korea,” Moh says. “It’s liked bottled water.”

Finally, there’s Jujube Tea which is good for anxiety and depression, as well as Turmeric Latte, which Moh says can help with arthritis.

As for the dishes, Tamra Teahouse offers a unique menu. While many of the dishes have Korean and Thai elements to them, there are also influences from West African and Caribbean cuisine. That is because Moh’s business partner, Berthe, hails from Mali. In addition, Tamra is located in an area of Crown Heights that boasts a large Caribbean population.

All this came together a few years ago when Moh and Berthe met while working at The Lucky Bee, a now-closed Thai restaurant in the city. Berthe had just come off as being a sous chef at a French restaurant after working his way up from delivering meat to the eatery. Moh, meanwhile, got into the food business after being laid off from a consulting firm in 2012, and soon found himself working alongside Berthe in the kitchen at The Lucky Bee. From there, the two decided to collaborate.

Since opening several weeks ago, Tamra Teahouse has been growing into its space.

“Things are progressing,” Moh says. “We just hired our first full-time counter person. In two weeks, our bar will be opening up.”

Along with the bar, Moh says there are also plans to do trivia nights, movie nights and stand-up comedy at his restaurant, to become even more of a gathering spot for the community.