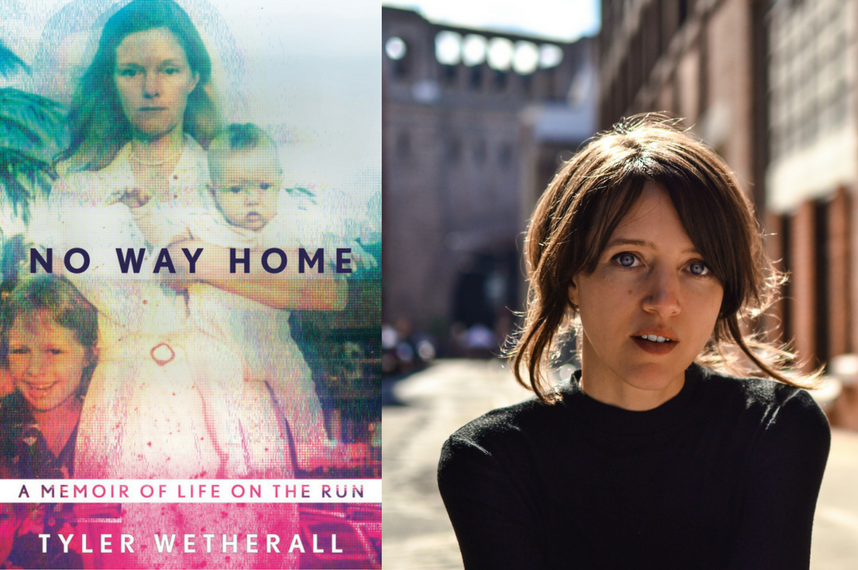 Tyler Wetherall, right, discovered at an early age that her father was a criminal running from the FBI, a revelation that upended her childhood and forms the subject of her new memoir.

No Way Home: A Memoir of Life on the Run
Tyler Wetherall
St. Martin’s Press, 2018

The hook is undeniable: What happens when Scotland Yard shows up looking for your father—and it turns out your loving dad is an internationally wanted criminal?

Tyler Wetherall, whose own name was changed several times to protect her father’s hiding places, had one hell of a childhood—13 houses in 5 countries before she turned ten. Routinely followed by FBI, she was forced to make calls from hidden phone booths and forbidden to tell anyone the unknowable truths enveloping her family. This compelling memoir is her attempt to make sense of it all, and she does a beautiful job.

The story starts with Wetherall as a child—who despite her family’s turmoil, gets on fantastically with her older sister, her best friend and perfect counterpart, and her half-brother who is kind and witty. Their heroic mother is a former model who navigates an impossible life and somehow still manages to be an eccentric, thoughtful and empathetic parent.

At first, this portrayal seemed overly rosy—but it is the view through Wetherall’s childish lens and we are along for her journey, slowly unraveling the truth as she does. The suspense she builds is brilliant. Is her father really a criminal? What did he do, or not do? Will he get caught? Who is he really?

Wetherall, who is now a young journalist in New York City, is capable of profound observations: “We practice ourselves with our family, falling back on stock phrases and phobias like talismans through which we return to who we once were.” Her prose is graceful and inventive, describing a rickety funicular “rattling like an old man’s cough.” When St. Lucian women carrying firewood on their heads walk by, she observes “the whites of their soles winked as we passed.”

The stunning twist of this achingly honest memoir is that her father—a fugitive who dragged his own family through a mess he knowingly created—is not all bad. He’s a charming badass who wears a leather jacket, drives a blue Harley and hung out with Bob Marley. He is intensely loyal to his wide net of influential friends who would do anything to help him. Despite his frequent absences, he teaches his children to swim, ski, ride a bike, do long division, scuba dive, play tennis, shuffle cards and never give up.

At one point Wetherall realizes that she feels safest when she is physically close to her father, “when in fact the opposite is true.” It’s mind-blowing to realize that “Your father is not the person you thought he was, which means neither are you.” And despite the fact that he selfishly devastated his family, he doesn’t desert them even when it would ensure his own freedom. On the other hand, he doesn’t turn himself in to save them. Are his choices forgivable?

It’s no surprise that it took Wetherall so many years to untangle the meaning of home.

Tyler Wetherall reads from No Way Home April 9 at Books are Magic! in Carroll Gardens, and on April 16 as part of Narratively’s Memoir Monday, hosted at powerHouse Arena in Dumbo.