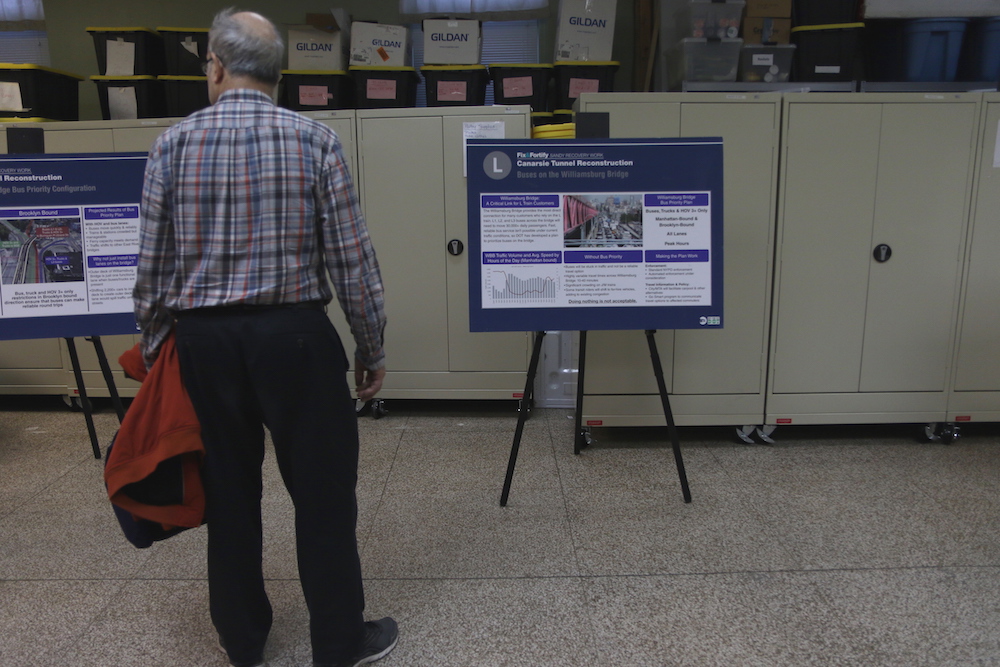 A Ridgewood resident eyes plans for the L Train shutdown at a recent community meeting. Two more town halls, May 8 and May 16, are planned in Manhattan and Brooklyn. Photo: Angely Mercado

I first heard about a potential L train shutdown around 2016 to fix the damage sustained during superstorm Sandy in 2012. I panicked and thought that it meant there would be no L train at all for more than two years. There were more updates online and by 2017 I learned that the L train would not be crossing into Manhattan for around 15 months starting in April of 2019. It would still run through all of the Brooklyn stops.

I’ve taken the L since I can remember. I’m a lifelong Ridgewood resident and I have always lived near the Myrtle-Wyckoff stop of the L train. It’s a convenient subway line to be near. And before all of the current delays that plague most of the train system today, it was a really reliable train for going to East Brooklyn or into Manhattan. So I’m not happy that the L train is shutting down; it’s really going to make commuting a nightmare for me. As it is, I’m getting leaned on and breathed on anytime I take a train.

I’m also near the M train, but with the subway already running at capacity, I know that the M is going to be packed as well. There are over 400,000 commuters along the L train line, so connecting trains like the A, C, M and G will be overwhelmed by people finding alternative routes to other parts of Brooklyn and Manhattan.

I attended a meeting in my neighborhood recently that outlined the kind of changes that are going to happen. Some include how anyone who lives near Bedford Avenue, the last Brooklyn stop of the L before Manhattan, can take a ferry from the water to a pier near 34th Street.

There will also be shuttle buses crossing the Williamsburg Bridge and over to the stops along 14th Street, where pedestrians will have more space to walk along. Private vehicles won’t be allowed onto 14th Street to make way for these extra pedestrian lanes that will take up part of the road.

More crosswalks will also be added to the Myrtle Avenue-Broadway stop in Brooklyn where the JMZ trains are. In preparation, the M train tracks are currently being reinforced to withstand all of the extra trains that will be running during the shutdown.

The MTA’s website offers all these charts and details on the improvements being made to the closed stops, and has two more Town Hall meetings planned May 8 and May 16. There’s also information on the L Train Coalition’s website about the shutdown and resources for small businesses.

Since the first announcements of the  L train shutdown, I’ve seen the angry comments in my neighborhood Facebook groups from frustrated commuters. But there have also been those who hope it will mean a slowdown of gentrification in areas like Bushwick and Ridgewood. I still recall one commenter’s question last summer: “So does this mean the rent will stop going up?” Another wondered if the shutdown would mean that “less bougie will people move to the area.”

Everyone seemed to be in agreement that they wouldn’t mind a crappy commute if it meant better rents, which my neighborhood’s more vulnerable residents desperately need. There are a lot of immigrant and working-class families that often have to double up with other relatives to pay their rent. They come from the Caribbean, Eastern Europe, Central America, and South America. A lot of them own small businesses and are stressed out by the ever-increasing rents. Some of them already have long commutes that would get longer if they have to move away.

They’re a part of what makes Ridgewood unique. This is a place that has created communities within communities. It’s where Polish stores have signs announcing that they also have Arabic and Spanish speaking staff. And until recently, it had decent rents that attracted immigrant families like mine to Ridgewood in the first place, before “up and coming” neighborhoods were even a thing.

I started searching around online to see if rents had actually changed thanks to predictions of the shutdown. If you comb through StreetEasy’s neighborhood data, you can see how Ridgewood rents had been steadily increasing since around 2015, which several groups like the Ridgewood Tenants Union have tried to address. (I reached out to them for this piece but they did not respond for comment.) The Brooklyn Ink reported a slow down in rent increases along the L train in 2016 after news about the shutdown was leaked, but that didn’t seem to last long. By the end of last year though, using StreetEasy’s same chart, rents in Ridgewood began dropping, mirroring other neighborhoods along the L.

As a lifelong Ridgewood resident and New Yorker, I like that rents will not increase crazily for a bit. And it does seem that at least some people will be leaving the area. These last few months, on the bus, the L and M trains, I’ve heard people discussing where they’re looking to move before the train shuts down so they can easily get around without having to take a shuttle or a ferry. 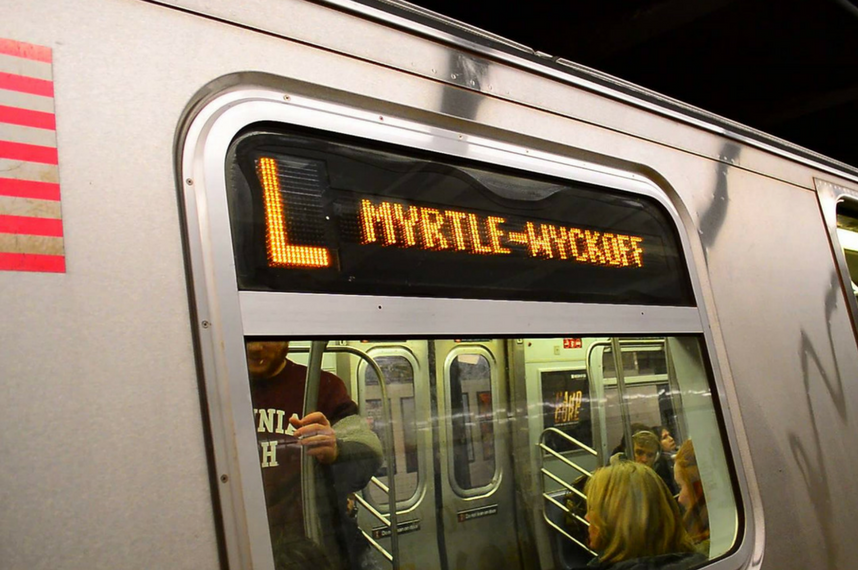 It makes sense that people would want to leave if they already have to deal with delays and trains that stop in tunnels all of the time. But I am worried about how the shutdown will affect small businesses and vulnerable families who aren’t able to just up and leave or simply use a car if the shutdown becomes too much of an inconvenience for them.

Ted Renz, the executive director of the Myrtle Avenue BID and a member of the transportation committee of the community board in Ridgewood says that he is worried, but that Ridgewood has more options than several other neighborhoods along the L line. He thinks more people will commute to the area to take the M train or the buses. He isn’t too worried about people moving here though.

“Some people might consider going East and taking the M at Myrtle-Wyckoff so we might end up with more people,” he said. “We don’t know how it’s going to affect shopping yet,” he added.

Renz knows that the gridlock and added commuters are going to be uncomfortable for residents, but he prefers a 15-month shutdown to the alternative plan that would have stretched over several years. He’d rather get the fixing out of the way and deal with issues community members may face as they come along.

“How do you plan for something like this?” he wondered.

Attending one of the community meetings and hearing the MTA’s plans for the shutdown did make me feel better about how it would work out. There are still options in my area like several buses and the M train, and much of the shutdown seems very well planned out. But low-income residents are always the ones who have had to bear the brunt of living with transportation issues, so I hope that people who can’t leave feel that their transportation needs are being met.