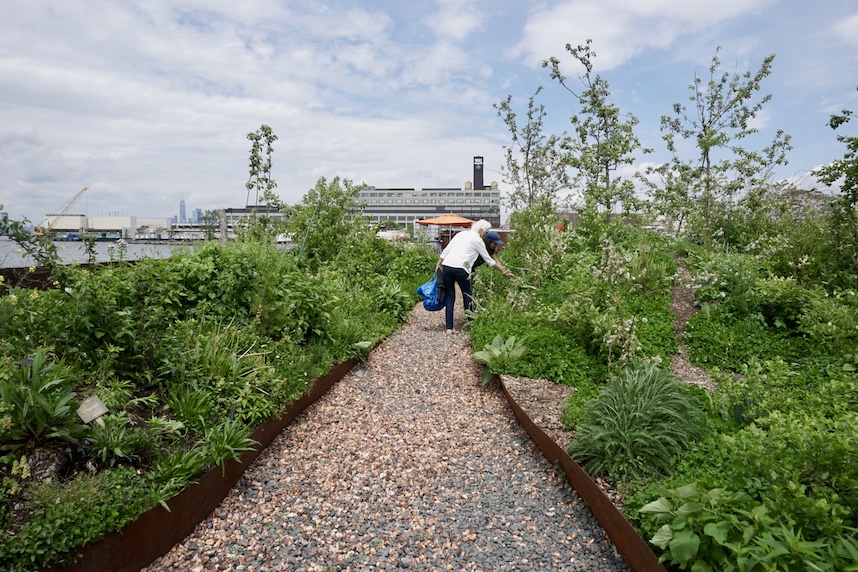 Swale is open to the public at Brooklyn Army Terminal every Saturday and Sunday, 12pm to 6pm, for foraging, tours and classes. Photo: Tyler Wetherall

NOTE: We incorrectly stated that Swale is back at Brooklyn Army Terminal through August 2019. They have a residency at Governors Island this summer. We apologize for the mistake.

Tucked away amidst the industrial landscape of Brooklyn Army Terminal, at first Swale seems simply to be a large steel barge. But then I look up, and above the high sides, I see sprouts of incongruous greenery. This barge is home to a 5000-square-foot floating food forest, verdant and wild, like the Secret Garden of Brooklyn.

Swale is the project of environmental artist Mary Mattingly. Ostensibly it’s a free edible perennial garden. Anyone is welcome to come aboard and pick-your-own herbs, fruits and vegetables, either to eat or plant at home, and learn about foraging and urban horticulture along the way. But on a deeper level Swale asks you to reconsider society’s relationship with food and whether access to food should qualify as a human right. It is a pertinent question in a city in which as many as three million New Yorkers live in communities with limited access to fresh affordable produce—so-called food deserts.

I climb aboard on a bright spring day as part of an Untapped Cities Tour, guided by Mary. As she leads our group along the narrow lava rock pathways winding through the beds, she stops to tell us about the plants: clover builds nitrates in the soil and is also lovely in salads; serviceberries make jam and keep the birds happy; mugwort is a dream enhancer, and anise hyssop is tasty as tea and cleansing for the liver. They are in the process of redoing the signs to make it easier for anyone to come forage.

Mary hands out leaves of spearmint for the group to try—a chewing gum alternative. Some guests seem hesitant to put something in their mouth straight from the ground, but there is no reason to be; the soil is clean and you can eat anything here. I chew happily on a fresh spring onion like a grazing cow. 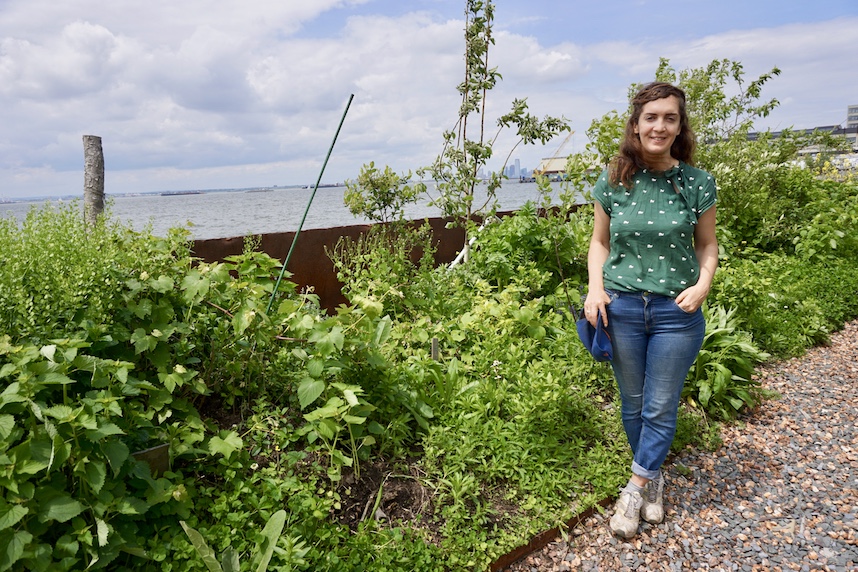 Much of Mary’s previous work explored ideas of sustainable living, ecology and community participation, such as Waterpod in 2009, another barge-based ecosystem, this one with living quarters, chickens, a water collection system and autonomous power. With Swale, Mary wanted to confront issues of food justice in the city and advocate for the idea of growing food on the 30,000 acres of public land. But in order to do so, she had to challenge an old New York City Parks Department law that deems picking anything from a public park as destruction of property. “We’re trying to re-envision spaces in New York. What if you could just walk into sections of the park with signs to tell you what to pick?” Mary asks the group. As we talk, visitors occasionally interrupt us, armed with shopping bags in search of sassafras, or wondering where to find rosemary. Others just want to take photos.

The project officially launched in 2016 in the Bronx River at Concrete Plant Park. There, Swale worked with a summer youth employment program to train young people as stewards. This year Swale’s floating forest has fewer annuals like peppers and tomatoes and more perennials, which are lower maintenance. The aim is for the team of mostly volunteers to spend less time pruning and more time talking to visitors.

Mary wants to prove that a commons like this can be sustainably managed, on land as well as on water. Already the first permaculture test space is up and running in the South Bronx, and Mary is currently collecting signatures to gauge the level of interest in creating a foraging garden on land in Sunset Park. 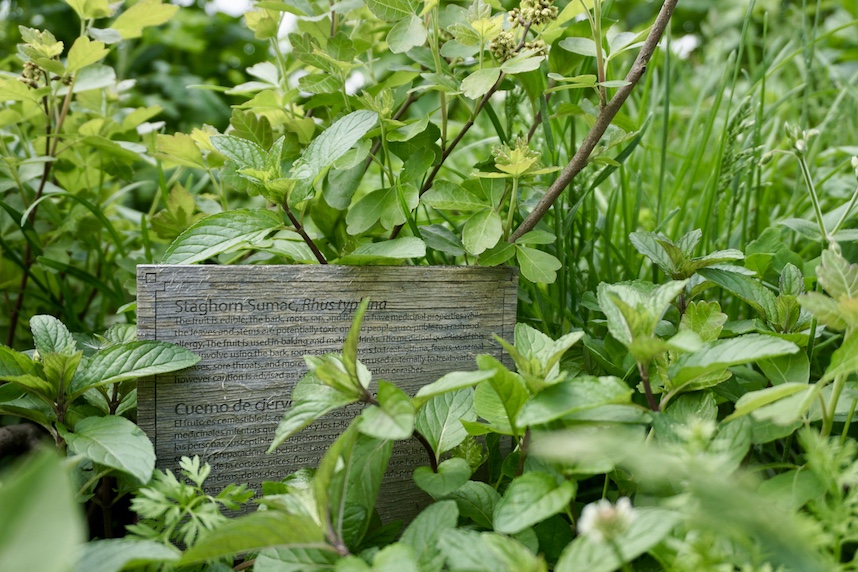 Swale is in the process of redoing its signage to make it easier for anyone to come forage. Photo: Tyler Wetherall

Labeling it an art project offers more regulatory leeway to enact Swale’s ambitions than if it were called an urban farming initiative. “I think what’s important is it’s blurring the lines between policy and something more experiential, and showing how one can help the other,” Mary explains. By experiencing a foraging garden in a different context—as a piece of art or an architectural folly—it offers a different lens to the question of shared food systems and what they might look like. Vision like this is needed within the world of policy in order to re-imagine more equitable structures, or as Mary puts it, “to help build the momentum to enact change.”

Big questions aside, I say farewell armed with a mint plant, which is now thriving on my windowsill.

Swale is open to the public at Brooklyn Army Terminal every Saturday and Sunday, 12pm to 6pm, with a program of classes, from medicinal plant recognition to salve making. Swale is also open to volunteers. After July 1st Swale will relocate to Governor’s Island. Mary Mattingly’s other work can currently be seen at Storm King Art Center and the Robert Mann Gallery.