It’s possible to salute the sun for free almost every day this summer, as New York City’s parks and public spaces are transformed into outdoor yoga studios. These classes are all either mellow Vinyasa flow or Hatha yoga—a gentle style that often includes a meditative component, so they’ll be satisfying and safe for all levels of practitioners, even total newbies.

We’ve also found all the free canoe and kayak paddles, outdoor dance classes and group runs you can join, too. Wear comfortable duds, bring water and a mat or your dancing shoes—the city is your gym for the summer.

Note: The following dates have been updated for 2019. 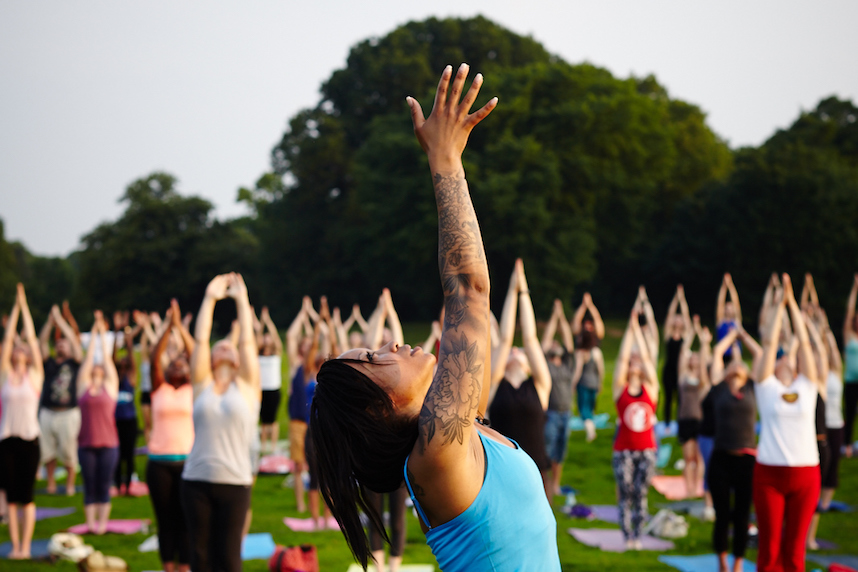 Mondays: Sunrise Abhaya Yoga in Brooklyn Bridge Park, 7:30am June 3 through August 26, no class July 1 Early risers, this one is for you. On Mondays mornings, salute the sun on the lawn at Pier 6 in Brooklyn Bridge Park while the rest of us are still groggily loading up on coffee and trying to figure out what to wear. Registration for each free class starts at 7am, so get there early if you want to stake out a specific spot. 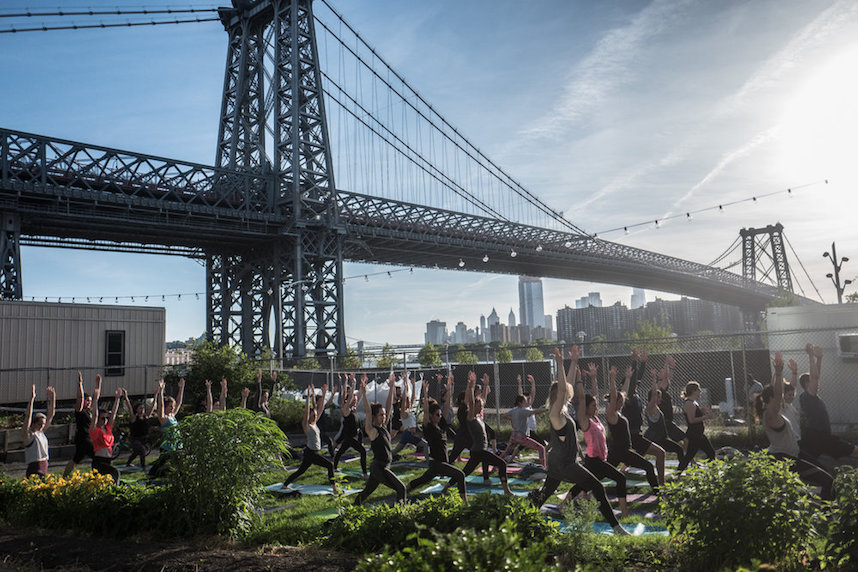 After your yoga session at North Brooklyn Farms, head to Domino Park for an evening stroll. Photo: Francesca Magnani

Tuesdays and Thursdays: Bryant Park, Tuesdays 10am to 11am, Thursdays 6pm to 7pm, June through September If you work near Bryant Park this could be a great stop on your way home, or an excuse to take an early lunch. You can register for the entire season using the MindBody app. Mats are provided first-come, first-served, which is extra convenient.

Thursdays: Prospect Park Yoga, 7pm, June 6 through August 29 (no class July 4) . Establish a Thursday evening routine with yoga in the Long Meadow in Prospect Park now through the end of August. It’s free, but you do need to RSVP before your first class so you can acknowledge a waiver, which you can do here, as well as check out the list of instructors for the summer. 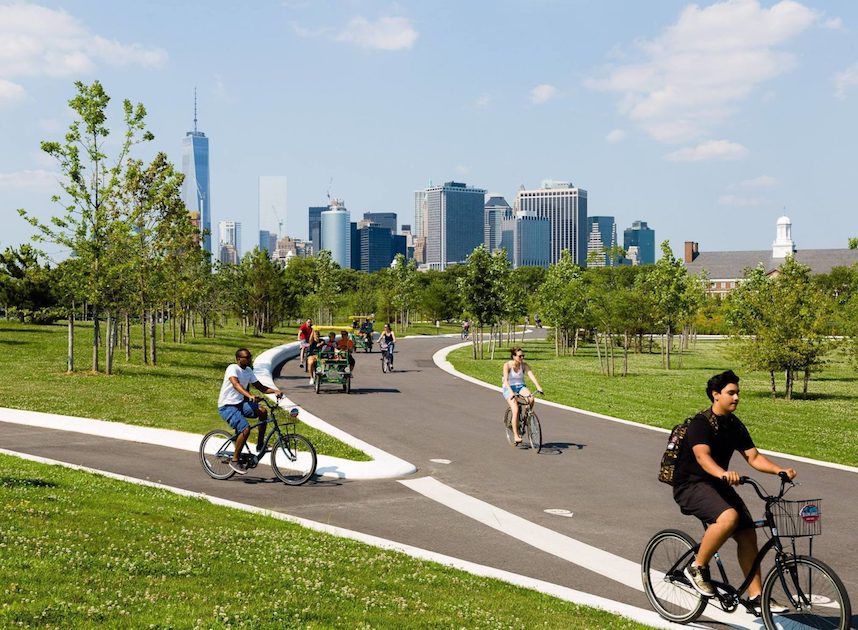 Free one-hour bike rentals on Governors Island, every weekday morning 10am to noon. If you want to start your day with a bike ride without the commitment of owning one in New York, come to Governor’s Island. Arrive early to take the ferry from lower Manhattan to get to the island, and spend a few hours leisurely cruising along scenic views. 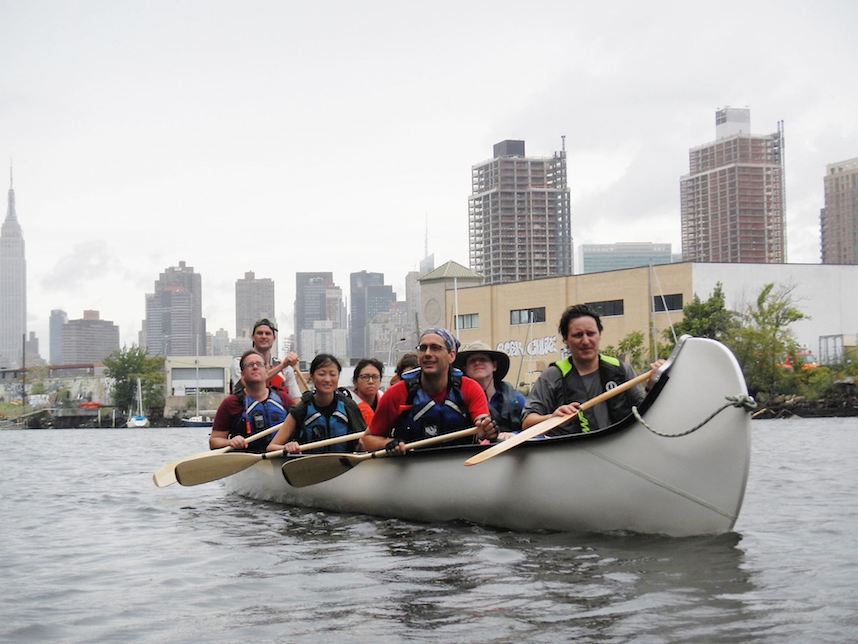 Thursdays 5:30pm-7pm and Saturdays and Sundays 9:30am-2pm, Brooklyn Bridge Park Boathouse, Pier 2, June through August. Soak in some sun, work your arms, and take in amazing views of the Brooklyn Bridge and the skyline from a kayak. Be sure to line up early, there’s only a limited amount of boats for everyone; rides are 20 minutes long.

Select Saturdays, noon-4pm, Public Paddles at the North Brooklyn Boat Club, Greenpoint The membership-driven North Brooklyn Boat Club invites the public aboard its 25-foot canoes on select Saturdays in summer, where its certified trip leaders bring beginners out onto Newtown Creek and often into the East River. It’s best to arrive early to guarantee your seat. The next dates are June 1 and June 15.

Summerlong, Brooklyn Bridge Park Waterfront Workouts, June to September, Join other fitness enthusiasts and feel the burn while breaking a sweat outdoors. Brooklyn Bridge Park hosts a variety of waterfront workouts like zumba, piyo, Broadway dance, retro dance, hip hop aerobics and more. Click on the link above to see times and locations in the park.

Saturdays, High energy workouts at Myrtle Avenue Plaza, Clinton Hill, 9-10am through August 13 As part of Move on Myrtle, a summer-long series of free fitness, kids and music events, this early morning session is led by either Southbridge Fitness, CKO Kickboxing or Vitality Health and Wellness. 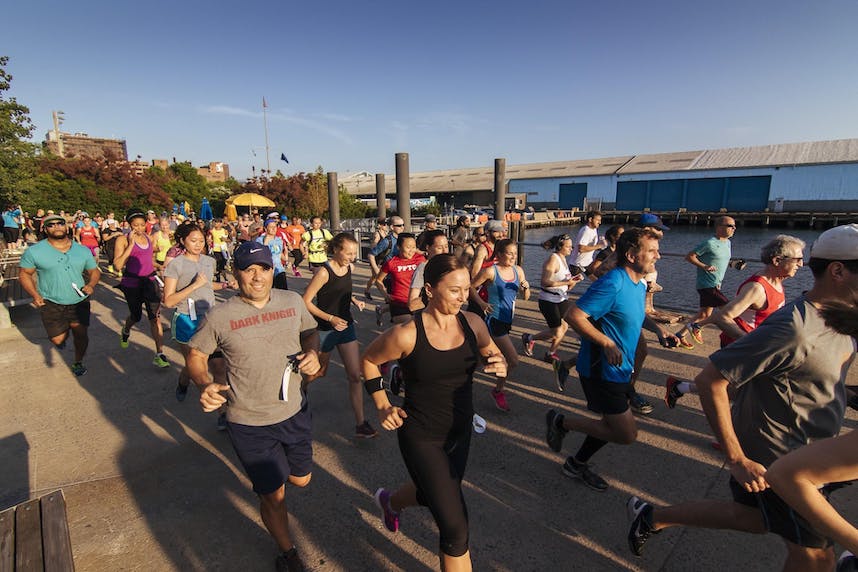 NYC parks, various times, year-round As part of its city-wide Open Run program, New York Road Runners organizes weekly runs throughout NYC parks. In Brooklyn you can join a Tuesday evening run at Brooklyn Bridge Park, a Saturday morning run in Shore Road Park or a Sunday morning run in Marine Park, among others. They’re open to all levels but be sure to arrive at least 15 minutes early to warm up.