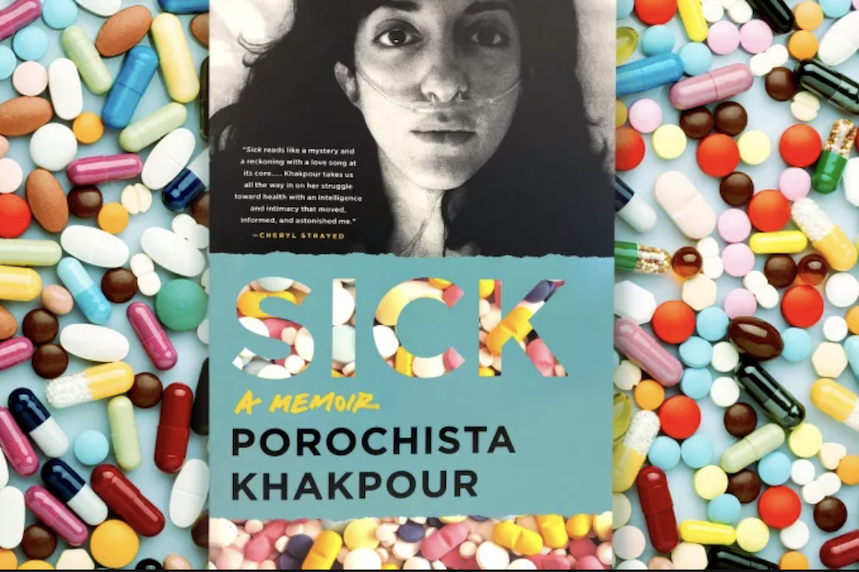 Porochista Khakpour was sick for years before she knew why, always, as she writes in her memoir, she felt, “I was born in the wrong body.” She’s been in physical pain her entire life, in her joints, her balance, in her insomnia, in panic attacks and tremors. Her memoir, Sick, is the story of her attempts to find out why, a travelogue for both an external journey that takes her from Iran to California to New York and Santa Fe among other physical locations in between, and an internal one, to find a name for the cause of the pain that’s made her feel displaced for her entire life.

She fled Iran as an infant with her parents during the 1979 revolution, settling with them in Southern California, but never quite feeling at home there, as an immigrant, a brown woman among white spaces. Her physical and emotional discomfort were so intertwined, doctors were more likely to suggest psychiatric options than treatment for what Khakpour ultimately finds is the cause of her misery: a rare, chronic form of Lyme disease, the tick-bourne illness that attacks the body’s soft tissues leading to all of the ailments that confounded her and and her doctors for years.

That her Lyme flare-ups are often exacerbated by external stressors, including Donald Trump’s election and the Muslim ban, only make doctors tell her things like “Nothing is wrong with you physically, you need to understand that.”

“Lyme is a disease many in the medical profession, unless they specialize in it, find too controversial, too full of unknowns, to fully buy it as legitimate, Khakpour observes. “It’s thought of as the disease of hypochondriacs and alarmists and rich people who have the time and money to go chasing obscure diagnoses.”

Unfortunately, with so many doctors dismissing her pain, that’s exactly what Khakpour has to do. While publishing books and essays and teaching creative writing at various colleges across the country, Khakpour always had another, thankless job: solving her medical mystery. As she writes, “I became someone who whose main job was trying out medications and going to the doctor.” She visits naturopaths, healers, a litany of doctors, even finding salvation in bee venom therapy. When she finally receives a diagnosis of Post-Treatment Lyme Disease Syndrome, she weeps.

Sick does not offer a neat narrative of triumph or at least of acceptance, that many similar medical memoirs tend to be. Khakpour admits that was the story she wanted to write, but her body wouldn’t allow it. Readers are better off for her raw honesty. As Congress continues to play Russian roulette with the American healthcare system, Sick should be required reading for lawmakers and doctors alike, who claim to feel, but maybe not truly understand, what it means to be chronically sick in America.