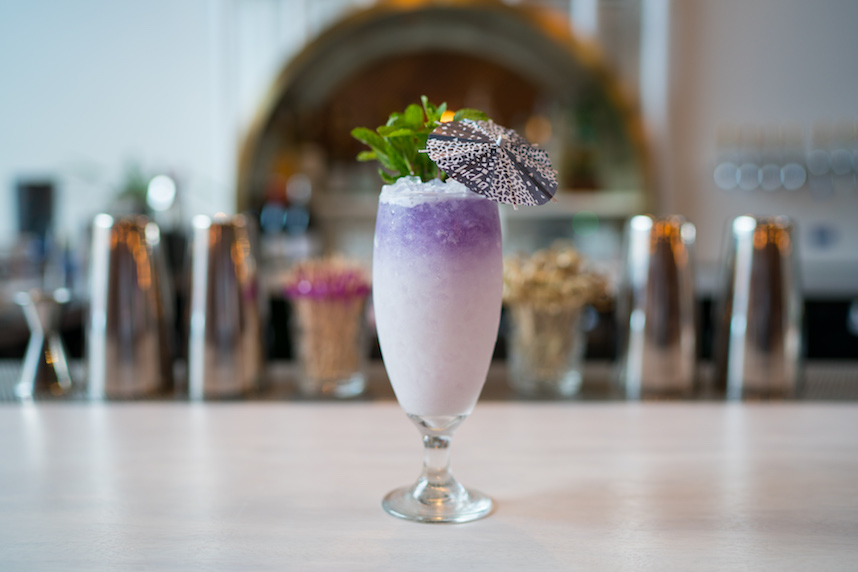 The Bluefields tiki drink at Chica is as delicious as it is Instagrammable, like everything at this beautifully designed Nicaraguan restaurant. Photo: Chicha

Vanessa Palazio remembers making tres leches cake as a child, carefully punching holes in the sponge to fill with the three-milk mixture, as her parents cooked up a storm around her. It was the first thing she learned to cook. She came over from Nicaragua when she was still a baby, and the food her family made—salpicon, gallopintos, pollo desmenuzado—became a touchstone to the country they’d left behind.

It was these beloved dishes that inspired the menu at Chicha, the Bushwick “cafetín and cocktail bar” Vanessa launched in May alongside partner Adam Schneider. The husband-and-wife duo previously ran the grilled-cheese shop Little Muenster, and their Dumbo pop-up Little Nica became a test ground for what they’re doing here.

The space is dazzling white with tall ceilings and a staggering bar, which looks closer to a church organ, made with wood imported from Nicaragua and stacked with rum. The art deco palette of pink and turquoise speaks to the vibrancy of the country, while the tropical mural by local artist W3RC places us firmly back in Bushwick.

This is the approach throughout: Chicha’s foundations are rooted in Nicaraguan culture and cuisine, but they’ve departed from tradition because, well, we’re in Brooklyn. The menu is divided into Chochaditas (bar snacks), Quesillos (a street food classic made with hand-mulled corn tortillas), and Entradas. We order a handful of quesillos to start, which have all been given a gastro makeover. The Langosta comes on a thick squid-ink tortilla with samphire and a meaty chunk of lobster, leaving our fingers dripping in crema.

Look, I’m a great dinner date, as long as you know that I’ll check the bottoms of plates to see who makes them as soon as I sit down, ask the server a whole bunch of questions about the menu & coordinate a photo shoot with my meal before I take a bite. (The white plate is Gibson, FYI, & the matte blue one’s from the same @ikeausa line I featured in my roundup of simple-but-cool ceramics for @thestrategist last week & you know I love a #stratinthewild spotting almost as much as I love millennial pink & cheese.) . . . . . #eeeeeats #thehappynow #feedfeed #flashesofdelight #tablesituation #forkyeah #buzzfeast #f52grams #pursuepretty #grubstreet #livethelittlethings #newyorkcity #liveforthemoment #stilllifephotos #todays_simplicity #darlingmovement #onthetableproject #dametravelerfoodie #beautifulcuisines #seekthesimplicity #eatfamous #foodandwine #foodbeast #brooklyn #buzzfeedfood #livecolorfully #dailyfoodfeed #petitejoys

We see a dish whizz past us on its way to another table, so magnificent that we immediately order one for ourselves. It’s the Salpicon Rillettes, more impressive than its listing suggests. Salpicon is a traditional Nicaraguan dish of minced beef usually served with rice and beans, something Vanessa describes as “an any day dinner.” Here it’s been reimagined as a short rib paté, which comes in a jar mixed with smoked coconut, and complemented by a touch of sweet acid from pickled watermelon. But it’s the dramatic “gallopinto” chip that drew our attention. Taking a cue from the black and white of the rice and beans, they created a tapioca crisp bread, which sits like a sail in the middle of the dish. We use it to scoop the rich meat mix into our mouths.

The mains are equally impressive riffs on tradition. The Baho is a pork version of the Nicaraguan staple, steamed with plantains and yucca and served on a banana leaf. We order the Guapote Gringo, a whole roasted sea bream cooked until the skin is crisp and salty and its flesh perfectly soft, served with bright corn relish. It’s inspired by the piranha-looking guapote fish from Lake Nicaragua in Granada, and is clean, inventive cooking at its best.

“My whole life has been R&D,” Vanessa tells me. “Anything I remember from my childhood, I wanted to make sure was on the menu in some form. When we’re not able to source ingredients or dishes aren’t visually appealing, we find an unexpected way around it.”  When she first had the idea for Chicha, she tested out dishes with her grandmother—just to bring it back to her roots. 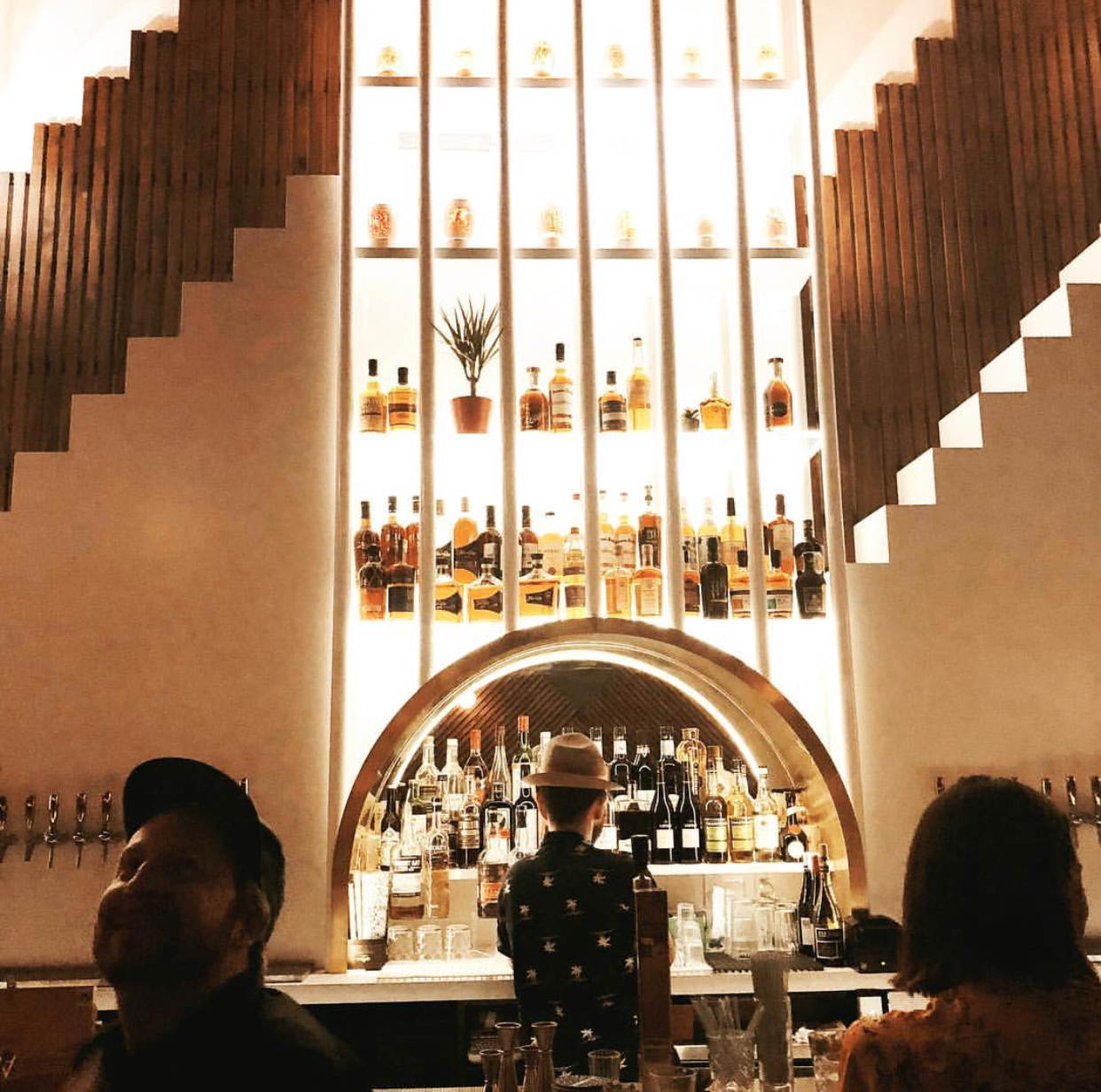 The striking back bar, stocked with over 100 rums, was made from Nicaraguan wood and resembles a church organ. Photo: @later_nyc

As we eat, the sun sets from beyond the tall window, through which we see the graffitied walls of Bushwick around us, particularly pleasing with cocktail in hand. The drinks are headed up by partner Marshall Altier. He’s stocked the bar with more than 100 rums, with flavor maps in the menu to guide even the rum novice. Marshall has selected bottles with story and soul behind them, such as the Haitian Clairin Vaval, which is made in a home-made pot still, steam-powered using a repurposed locomotive engine. There are six draft cocktails, as well as a shaken menu, paying homage to the drinks and ingredients Marshall encountered during his time in the country. One of the most popular is the Instagram-friendly Blufields Swizzle—a tiki blend of four rums, banana liqueur, falernum, coconut, lime, and butterfly pea flower.

We finish the meal with the Maduras Infiernos, churros stuffed with caramelized plantain and crunchy cinnamon caramel. It feels nostalgic, like a grown-up cinnamon toast.

While most Latin American countries are well represented in New York’s diverse culinary scene, Nicaraguan cuisine has been notably limited. Vanessa and Adam, who until the recent political turmoil spent as much time as possible there, have long loved introducing Nicaraguan food to their friends. Now, they’re doing it for the rest of Brooklyn too.


Full Disclosure: This meal was paid for by a PR firm representing the restaurant.