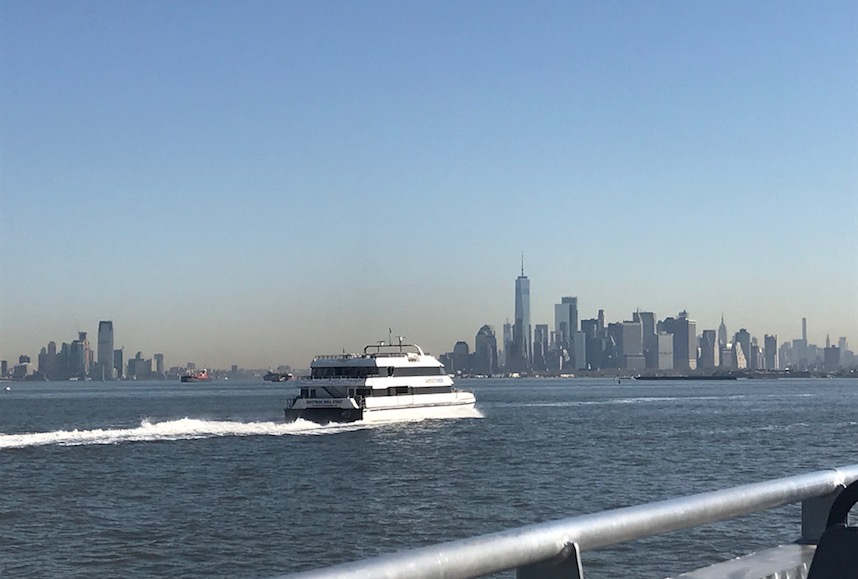 Just one of the perks of taking the South Brooklyn ferry: views like these of the NYC skyline. Photo: Anne Szustek

To anyone in the greater Park Slope-Sunset Park-Bay Ridge metropole, a mention of the R train is an instant ice-breaker. Nary a subterranean morning commute passes through the caverns below Fourth Avenue without a screech ending in the dulcet canard “there is train traffic ahead of us.” It’s the wheezing piece of aging transit infrastructure that binds.

Fortunately, since May 1 of last year, the South Brooklyn line of the NYC Ferry has offered those who work in and around the Financial District a transit alternative devoid of the durian-like stench that befouls the subway line this time of year. Running from Bay Ridge to Brooklyn Bridge Park before its final stop at Manhattan’s Pier 11, the full trip takes about 40 minutes, roughly the same length of an R train commute—but with views of iconic architecture, sea breezes, and a kiosk on board that serves refreshments including beer, wine, and margaritas on tap in the evenings.

You don’t need to be a commuter to appreciate these perks—getting a drink on board and enjoying the view is reason enough for the $2.75 ride. But why not bring happy hour off the boat and explore? The ferry, which runs from 6:30am to 10pm daily, allows unlimited transfers for two hours, with an activated ticket on the dedicated app or a paper transfer ticket from the onboard kiosk. And on summer weekends, it also stops by Governors Island for your picnic needs.

So pick a starting point using the timetable, and ride the NYC Ferry with no other goal than to enjoy the skyline views and to take a day trip by boat. We’ve singled out pizza joints, outdoor bars, and other highlights at each South Brooklyn stop to inspire your explorations. 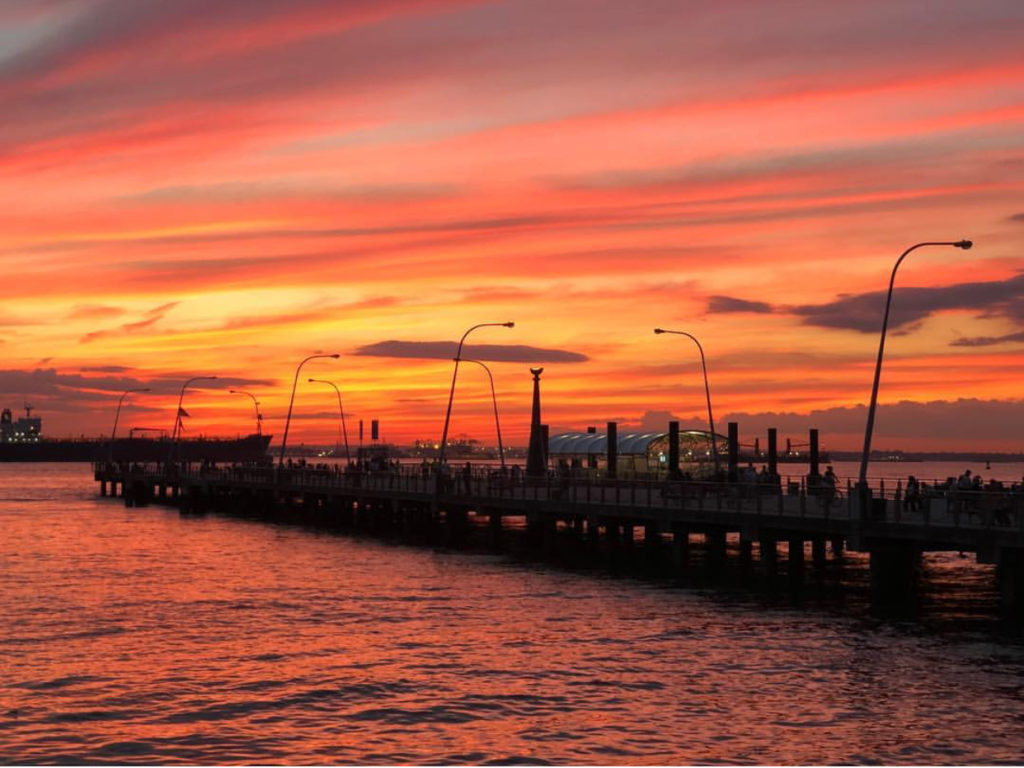 Time your trip just to glimpse a sunset on the water. Photo of 69th St. Pier: @klivan

Located at the neighborhood’s far northwest corner at the end of Bay Ridge Avenue, the ferry station is about a 15–20-minute walk from Bay Ridge’s main drags on Third and Fifth Avenues. The area immediately around 69th Street Pier (also called American Veterans Memorial Pier) is largely residential, though a solid starting point is the aptly named Pier 69 Market (10 Bay Ridge Avenue; 718-777-6969; M-W 8 am–6 pm; Th-Su 8 am–7pm). Since its revamp late last year, the place is now a solid place to grab a cold brew (32oz $6.50) to fuel your trek up the neighborhood’s namesake ridge. The coffee shop, which also has a variety of bagel sandwiches in the mornings and light pastas, salads and sandwiches come lunch, is a nexus for the local running and cycling community, with flyers for local races posted on the bulletin board. (Besides this being the southern terminus of the South Brooklyn ferry route, the pier is also the start of the 4.5-mile Shore Park and Parkway, which hugs the Narrows and New York Bay as it winds to Bensonhurst Park.) 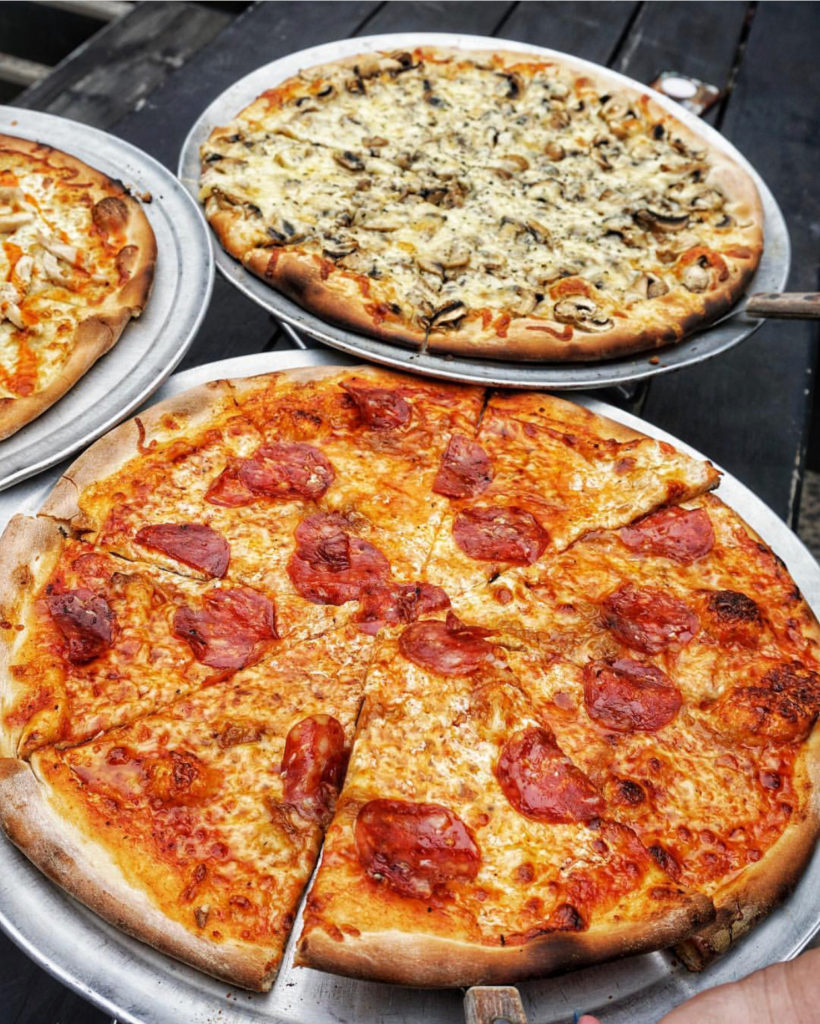 A bevy of pies from Brooklyn Firefly. Photo: @beersnackalmanac

Few places in the five boroughs have better pizza per capita than Bay Ridge. The Brooklyn Firefly (7003 Third Avenue; 718-833-5000; Tu-Th 5–10pm; Friday 3 pm–2 am, midnight kitchen close; Saturday 11 am –2 am, midnight kitchen close; Sunday 11 am–10 pm) manages to harmonize both old-school Brooklyn with the rising undertow of the neighborhood’s art and music scene. Opened in 2016 by Michael “Mr. Kaves” McLeer, a native of Bay Ridge and a founder of 90s rap/rock crossover group the Lordz of Brooklyn, many of the pizza recipes were honed in his backyard pizza grill. Many of the names represent the local nabe: 86th Street ($21), topped with fresh mozzarella, pepperoni, Grana Padano, basil and garlic oil; the Saturday Night Fever ($23), which has a decidedly non-Tony Manero hot honey, hot soppressata and caramelized onion; while vegans can tuck into The Mook ($20), topped with arugula walnut pesto, roasted eggplant, macerated sun-dried tomato, and crispy garlic. The pizzas serve 2-3 hungry eaters; gluten-free crust is available in personal pizza size. Also deserving a mention (if not a schlep to Bay Ridge) are the giant rice balls. The Big Ragu is the highlight, stuffed with ground beef, peas, and carrots, and topped with meaty Sunday sauce—serious business down in Bay Ridge.

The expansive space includes an invitingly dark dining room and bar area that hosts local acts and profiles local artworks. During the early dinner hours, the adjoining patio is choc-a-bloc with strollers whose passengers sip on confections such as the Shirley Temple Float ($8) or thick shakes rimmed with cookies with names such as the Blockbuster and La Dolce Vita. Come sundown, the crowd starts to skew older, and the drink orders shift over to a roster of local brews and craft cocktails. 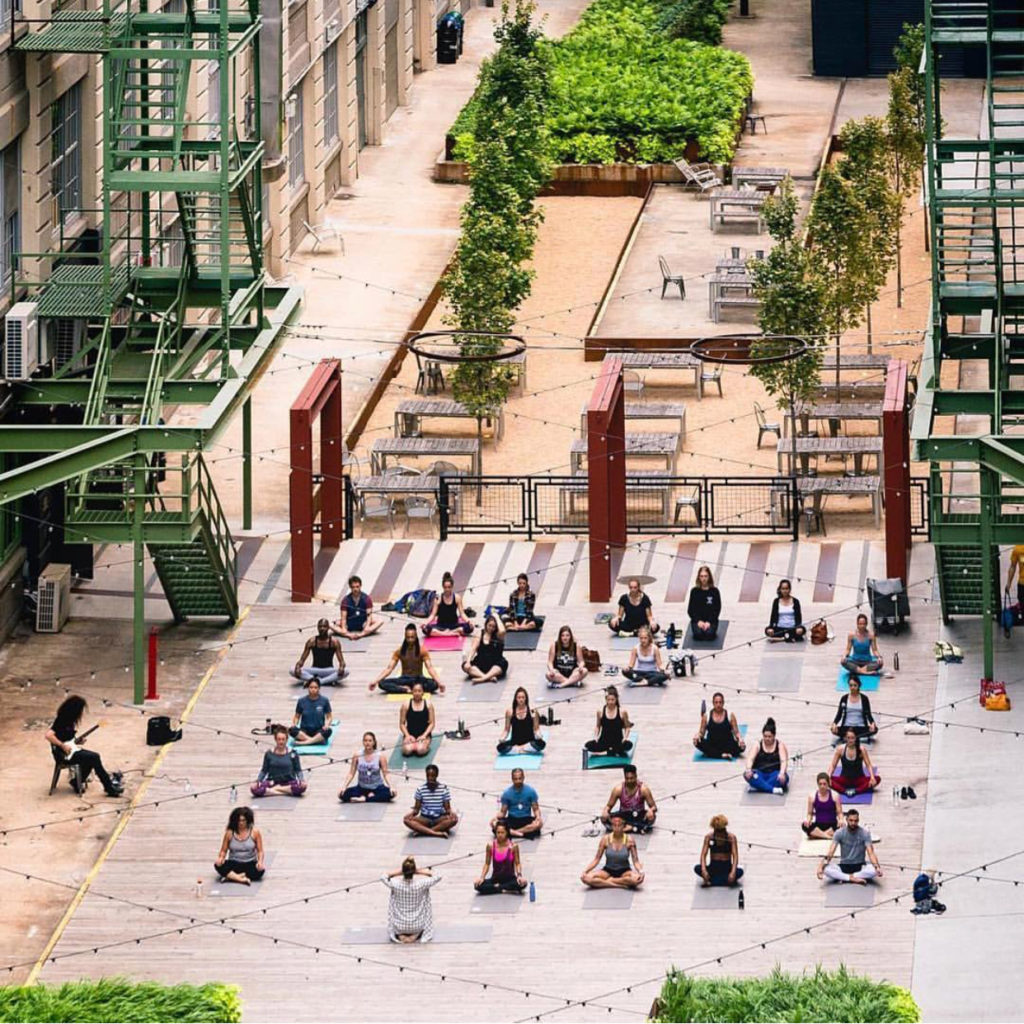 Bring your mat aboard the ferry for free sunset yoga every Friday at Industry City from 7-8:30pm in Courtyard 3/4. Photo: @kevin.ornelas

Much of the Sunset Park waterfront has been subsumed by Industry City, which is a 30-minute hike on foot from where the ferry lands at Brooklyn Army Terminal. The terminal hosts few activities—aside from a free screening of Black Panther with Rooftop Films on Friday, August 4—so you’ll likely want to head to Industry City.

Rather than walk, you could take a Lyft, or ride a bike to enjoy all of IC’s food and drink options, the free yoga on Friday evenings, The Frying Pan’s new game room, or The Bell House’s summer residency in Courtyard 1/2 with comedy, cocktail parties and concerts like Guided By Voices on August 16.

If you bring your bike, it’s a 10-minute ride from the ferry landing and costs an extra $1 to stow it aboard, but with only 8 – 10 bikes allowed per ferry you may have to wait to board one with room for your wheels.

You could also skip Industry City and its infamous, $18 coffees and head instead to the classic pub, Irish Haven (5721 Fourth Avenue; 718-439-9893; M-Sa 8 am–4 am; Su 12 pm–4 am), a 20-minute walk from the ferry landing. The bartenders actually hail from Ireland, and the bar has been serving suds to local dockworkers since 1964. In 2011, the year of the building’s 100-year anniversary, Matt Hogan took the reins as manager when he leased the bar from its original owners and ushered in modern trappings such as Taco Tuesday and a trivia night. Yet overall, the bar stays true to its roots. The fact that parts of The Departed were filmed here is a testament to the Irish Haven’s authenticity (though perhaps not so much to the movie’s being set in Boston).

Our Sunset Park taco crawl would be another, delicious way to explore the neighborhood with the help of a car service. 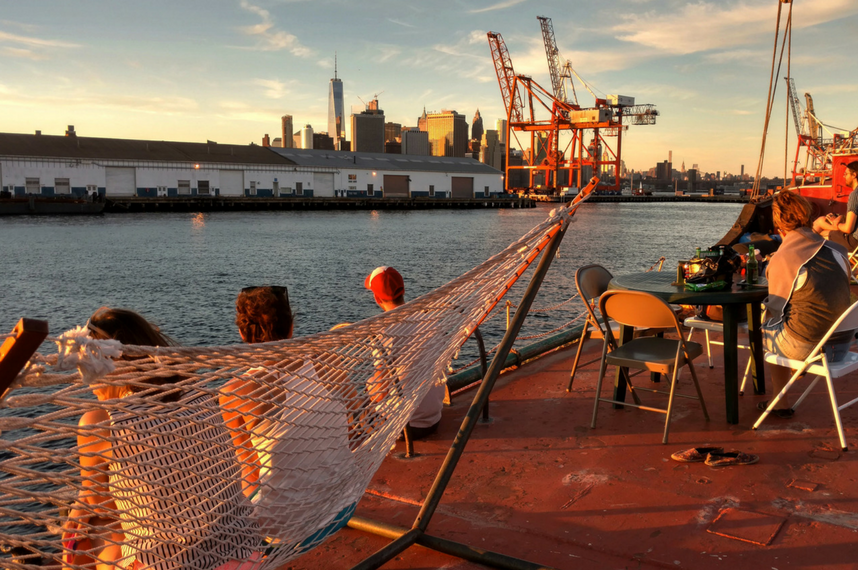 If you take the ferry on a weekday or the second Sunday of the month, climb aboard the Mary A. Whalen — the oil tanker is right next to the ferry. Photo: Portside

While Red Hook may be relatively remote via subway, the neighborhood’s eateries and watering holes are within easy reach of the ferry landing.

Keep up your seafaring vibe with a stop at Portside if you happen to visit on a weekday between 10am and 6pm or the second Sunday of the month from 5 to 10pm (August 12 and September 9 are the remaining summer dates). The retired oil tanker is right next to the ferry stop, and during its open hours everyone is welcome aboard. Relax in the hammock, watercolor at the art table, or pet the ship cat, Chiclet.

A short walk away is Brooklyn Ice House (318 Van Brunt Street; 718-222-1865; open every day 12 pm–4 am). Pour back one of the nearly 50 beers on the list or one of the bourbons on the menu and settle into some of the restaurant’s charmingly mismatched furniture. The menu retains hints of its smoky past as Pioneer BBQ, including pulled pork sandwiches, or that Texas high school football game classic. Frito pie. Vegetarian options include veggie burgers—albeit with an option of getting bacon on it.

If you want your food to be as seaworthy as your commute, you’d be hard-pressed to do better than the Red Hook Lobster Pound (284 Van Brunt Street; 718-858-7650; Su-Th 11:30 am–10 pm; F-Sa 11:30 am–11 pm). At its sprawling Red Hook location — they also operate the Rockaway Clam Bar at Riis Park Beach Bazaar — you can tuck into a full lobster dinner, including a 1.5-lb Maine lobster, new potatoes, corn and slaw (market price; $25 on Wednesdays) or one of their lobster rolls, a traditional Maine-style, served with a hint of mayo; a Connecticut-style with warm butter; an in-house creation Tuscan-style, with basil vinaigrette, orn the BLT, with Applewood-smoked bacon. All come with slaw, pickle, and a choice of fries, potato salad, or green salad and run $26-$28. 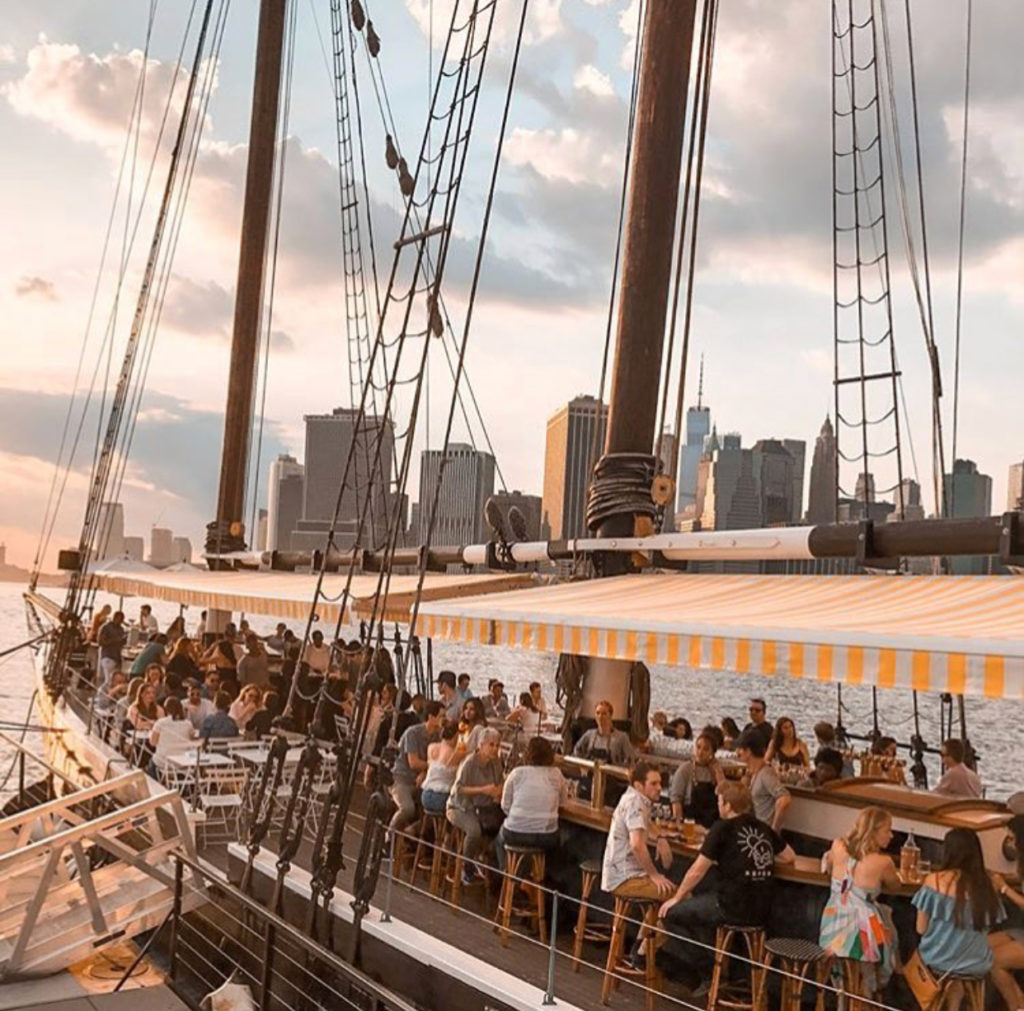 Disembark from the ferry at Pier 6 to board another boat at Brooklyn Bridge Park: Pilot. Photo: @charlottebridgeman

Daily South Brooklyn ferry commuters know that on the ride home from Manhattan, this is the stop where the throngs of selfie-taking tourists tend to disembark. You’ll join them briefly before transferring to another boat, Pilot (Pier 6, 917-810-8550; M-F 4 pm–12 am; Sa-Su 10 am–12 am). This restored 1920s racing schooner is docked again for the summer after its successful maiden run last year. Helmed by Alex and Miles Pincus, who got their seasonal boat restaurant sea legs with Tribeca’s Grand Banks, the deck is flanked by bars on all sides, including an oyster bar at the bow and a beer and cocktail bar in back. A few of the cocktail names take cues from their nautical setting, including the Life at Sea ($15), with vodka, bitter lemon syrup, and Aperol, topped off with seltzer; and the Life Preserver ($15.50), a blend of rye, cognac, lemon, ginger, seltzer, and bitters. Steering the culinary course is former Eleven Madison Park chef Kerry Heffernan, whose menu also reflects the venue, including a Montauk sea bream ceviche ($16); a lobster roll ($26); and a hash brown topped with smoked rainbow trout roe ($19).

Brooklyn Bridge Park is also home to the sole outpost wood-fired pizza standby Fornino south of Flushing Avenue (718-422-1107; open every day May-October, 10 am-park close), and the only location to afford rooftop seating with stunning views of the lower Manhattan skyline. Late-morning commuters can stop by for bacon, vegetable, or sausage egg sandwiches ($9) to take on board. Come evening, the area also has a bar, including pitchers of sangria and signature cocktails, including a blend of prosecco, Campari, and lemon titled the Park Life, a nod to its surroundings (if not the title track of the iconic 1994 Blur album).

Located at the crossroads of the ferry landing and the foot of the Brooklyn Bridge, this corner of Brooklyn Bridge Park has plenty of refreshment options to slake your cravings. The serviceable, if not somewhat touristy, Brooklyn Ice Cream Factory and Buzz Bar complex are immediately off the ferry station, with its red tent offering the occasional live music to pair with its beer selection. The Lizzmonade stand, located stage right to exiting the ferry, bills itself as “more than a glass of lemonade” is indeed a solid place for an iced coffee. The restaurants along the western end of Old Fulton Street—a location of Shake Shack and the venerable pizza outposts Juliana’s and Grimaldi’s—need no introduction. And on a Thursday night, it’s just a few minutes walk from the ferry landing to the outdoor movies with Smorgasburg on Pier 1.