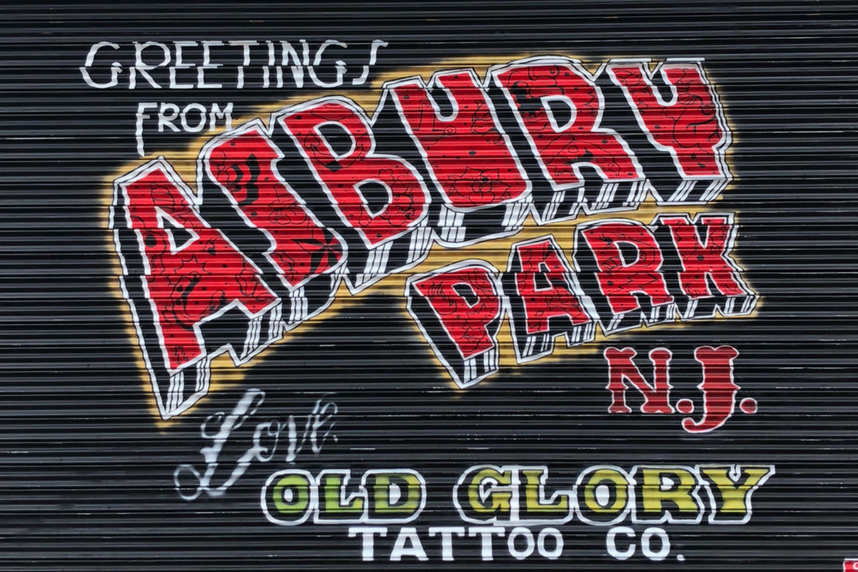 You may think Asbury Park is synonymous with Bruce Springsteen. You wouldn’t be wrong. The Boss’s 1973 debut album was called Greetings From Asbury Park, NJ, after all. But since its “Glory Days,” there have been renovations and revitalization to this historic seaside town that you may not be aware of. The famous boardwalk has transformed itself from seedy to sensational almost overnight with boutique hotels, hotspot restaurants and interesting shops. LBGTQ residents have moved in to restore Victorian houses, tattooed sun worshippers lay next to the beef jerky skinned elders, and the grown children from Asbury Park are moving home after living in Brooklyn (and elsewhere) to open unique stores that they couldn’t afford in NYC. 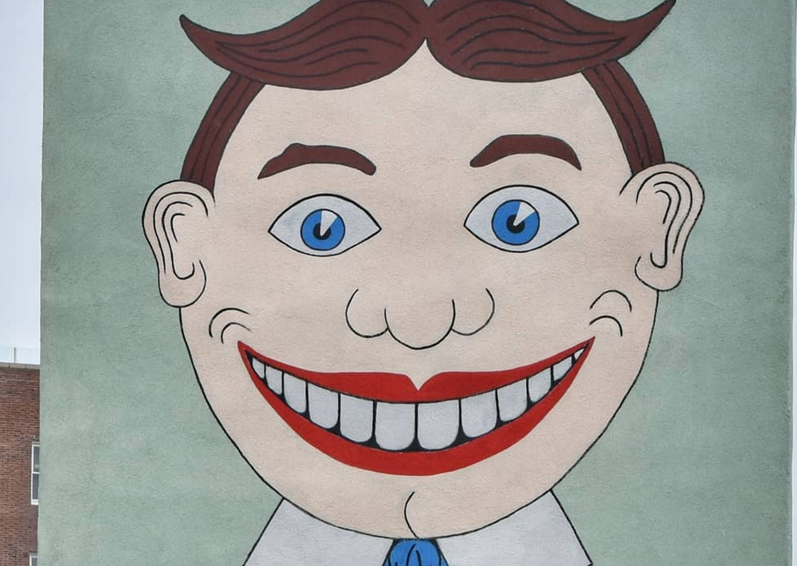 Tillie’s name comes from George Tilyou, owner of Steeplechase Park in Coney Island, who brought his rides to Asbury Park, too. Photo: @phrankied

Mostly everything is situated around the boardwalk and up Bangs Avenue. It’s gentrification, sure, but it’s also a rebirth of an “Asbury Park” idea, all without losing its blue-collar roots and bawdy sense of humor. The creepy all-seeing “Tillie” face, which first appeared when the owner of Coney Island’s Steeplechase Park expanded to Asbury Park in 1880, is still the international symbol of the town. It grins from murals, towels and t-shirts, reminding newcomers that this will never be the Hamptons, regardless of what the developers might think.

A note on travel time: Asbury Park is only an hour and a half drive from Brooklyn. Cheap options are also available via public transportation for a slightly longer travel time. However you go, listen to this Asbury Park playlist from Antonio De Pietro on your way to the beach—it’s not all Bruce! 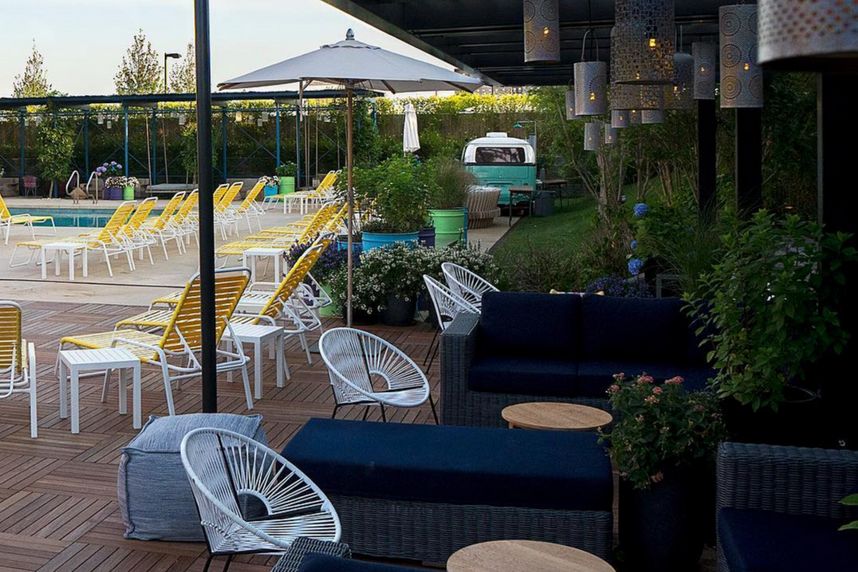 Located steps away from The Stone Pony, the club that Bruce Springsteen put on the map, The Asbury Hotel is the town’s answer to a Hard Rock in any other city. Opened in 2016, the 110- room, eight-story hotel is located in an old Salvation Army boarding house, but you would never know by its sleek exterior. Rock ‘n’ roll rooms have views of the ocean, but who’s sleeping with two rooftop bars and a pool to choose from. Other bonuses include yoga classes on the roof, beach passes, and movies on the roof (all for an extra fee.) You may never want to leave, yet that would be unfortunate with so much to explore. Although this isn’t where I stayed, I would give this a try, especially with big groups. Their  “Quad” and “Octo” room features four or eight bunk beds, where you could stuff all the kids (or all your friends), ensuring some unforgettable summer memories for the entire gang. The Asbury, 210 5th Avenue, Asbury Park. High season rates at time of writing: starting at $350/ night. 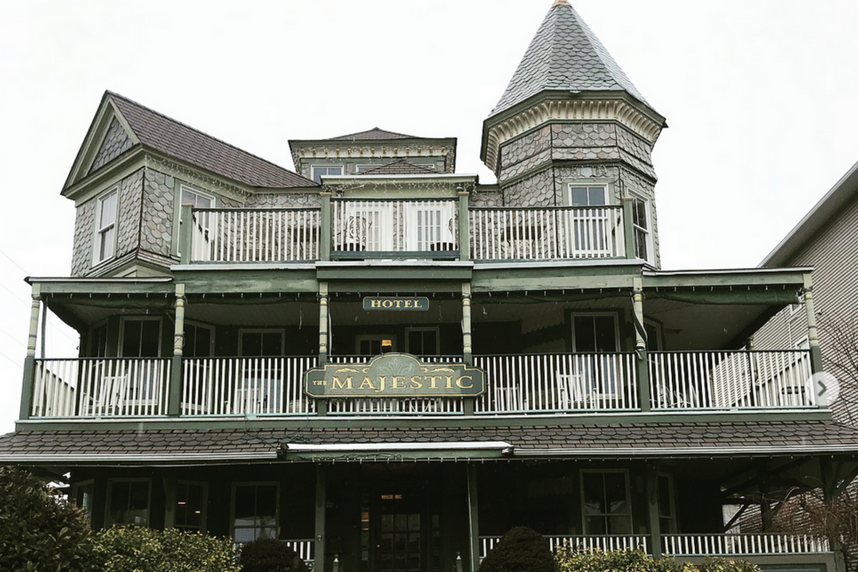 There’s nothing exactly majestic about The Majestic, per se, but it is a grand old dame Victorian a block from the beach in Ocean Grove. This neighborhood of dollhouses is an easy 10-minute-walk down the boardwalk from the Asbury Park action (think the distance between Coney Island to Brighton Beach.) According to Instagram, this is a “boutique hotel,” but it looks and acts like a bed-and-breakfast. The weekend we were there, there were remaining decorations from a baby shower that happened the night before, and they seem to host many weddings. The rooms were spacious, if a little outdated, and our room was extremely stuffy while our friends across the hall complained of it being ridiculously cold. The price is very reasonable, and includes a great breakfast set up in the sunroom, with strong coffee, baked goods, yogurt, fruit, and more. The Majestic Hotel, 19 Main Ave., Orange Grove. High season rates at time of writing: starting at $250/ night.

Where to Eat & Drink 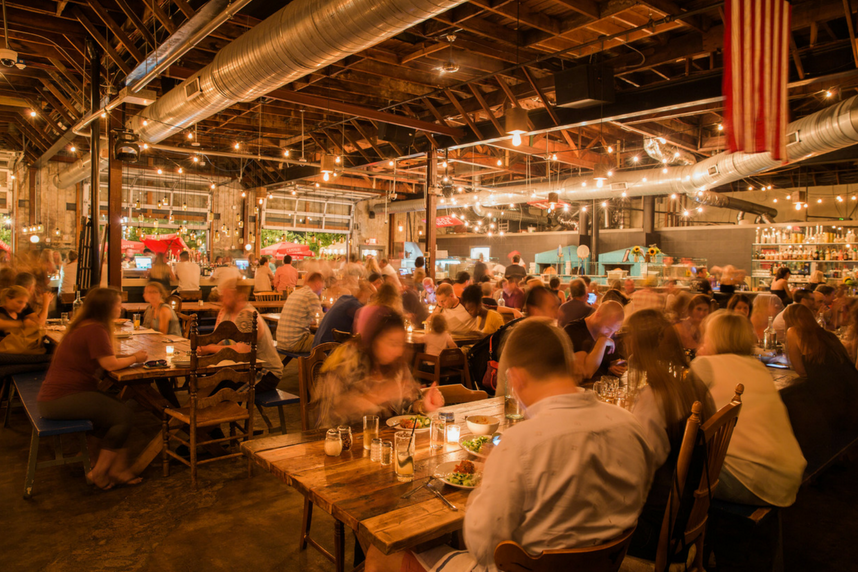 You might be desperately sick of gourmet pizza if you live in Brooklyn, but you’re going to come to Porta anyways. The space holds a piece of key Asbury Park history: it’s the former location of Student Prince, where Bruce Springsteen supposedly met Clarence Clemons. It is also the restaurant that is credited for invigorating the dining scene here. Plus, it’s enormous, and breezy with open garage doors, and it is filled with long communal tables that can hold large groups. Arrive early to put your name on a list (we waited 2 hours for a table on a Saturday night.) You can pass the time by drinking in the enormous bar area, or leave your number and head back to the boardwalk. Once seated, we ordered an Italian Stallion (gorgonzola and sausage), a Summer Betty (heirloom tomatoes, goat cheese & mozz), and a giant salad. The mozzarella is housemade, the tomatoes are brought in from Italy and the pizza ovens were made in Naples.  Since it was too loud to hear or talk, we were able to really focus on our food. You can catch up with your friends another time, but you won’t get pizza this fresh anywhere else in Jersey. Porta, 911 Kingsley St., Asbury Park. 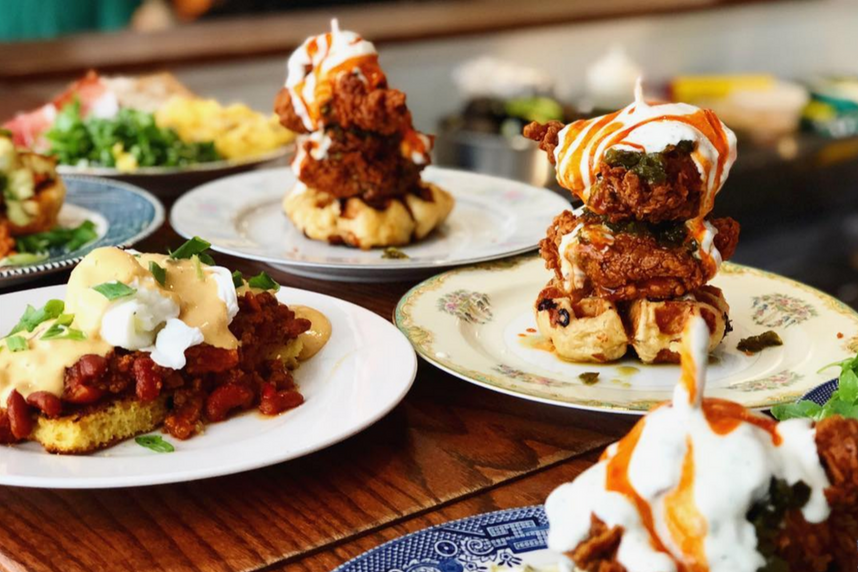 This is the best breakfast place in Asbury Park, according to everyone in Asbury Park. And ooh boy, those plates will entice you as they go by. House-made gravalax piled onto beet-horseradish cream cheese hiding a sprinkling of capers and a bagel. Or look, towers of chicken and waffles with maple poblano relish. I started weeping when I read about the cacio e pepe scrambled eggs, because I realized I was not going to be able to have any of this. The restaurant closes at 3pm, and there was a very long wait. It might even be worth getting there when it opens, just for the lobster chimichangas. With extensive vegan offerings, a kids menu, and kombucha on tap, there’s something for everyone here– if you can get a table. Cardinal Provisions, 519 Bangs Avenue, Asbury Park. 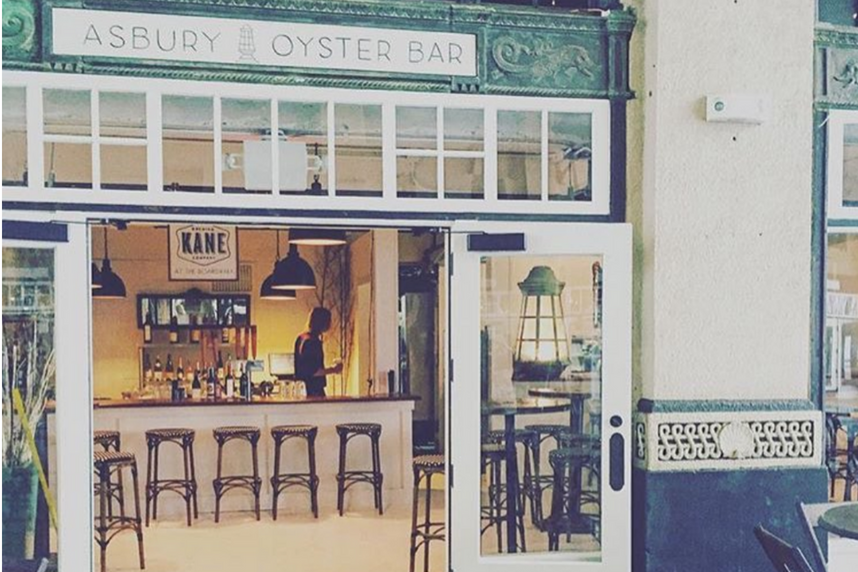 When you hear that this oyster bar is located in a convention hall, you may feel disappointed. Let me assure you that this historic convention hall has been recently renovated to its former glory: the massive building gleams and contains a stadium and a public area called the Grand Arcade. Inside is a respite from the heat with a sprinkling of boutiques selling local artisan wares like soap, surfboards or beachwear. Pull up a stool at Asbury Oyster Bar and split a dozen or a charcuterie board along with an Elderflower Spritz or bottle of prosecco. It’s a perfect spot for coming in from the sun before you’ve changed for dinner, ready for happy hour or aperitifs. Asbury Oyster Bar, 1300 Ocean Ave., Asbury Park. 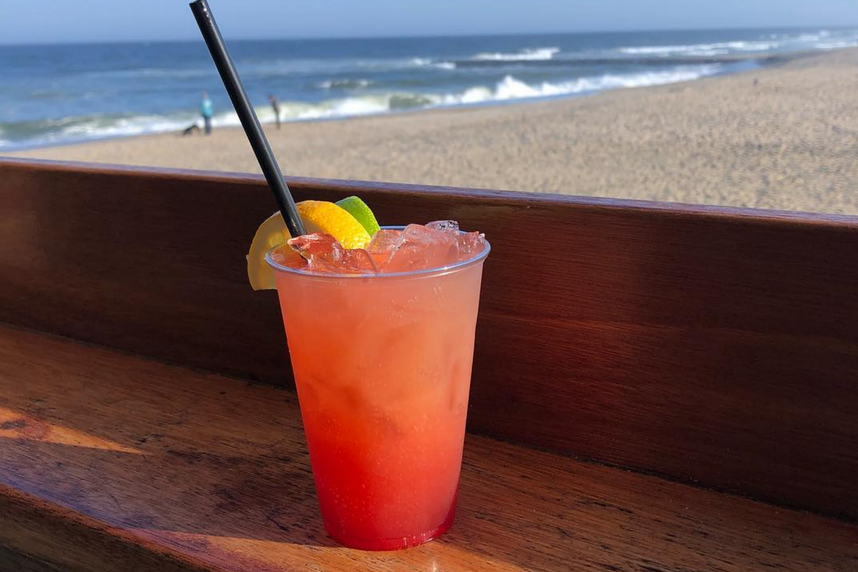 It’s shocking how many beach bars in the tri-state area aren’t actually on the beach. There’s just something about drinking a cold one while your toes curl in the sand that makes one instantly feel on vacation. There are other great bars on the boardwalk, like The Robinson Ale House, but The Beach Bar has a deck and a plot of beach where you can take your drinks. There’s sometimes live music or drink specials, but there is always sand. Plop yourself down with a plastic cup of a drink of your choice and watch the waves roll in. The Beach Bar, 1300 Ocean Ave., Asbury Park. 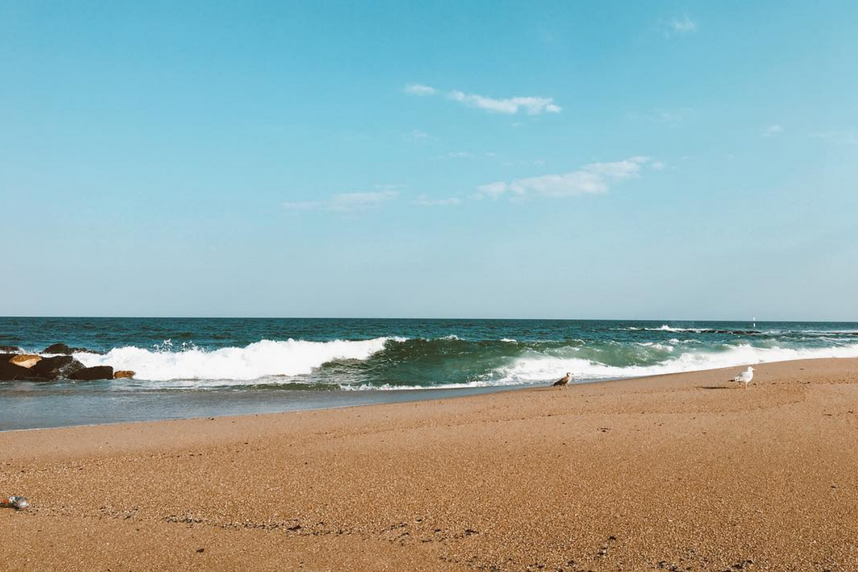 Lay on the Beach

During the day, you’ll obviously be sitting at the beach all day. (Duh.) Bring sunscreen. 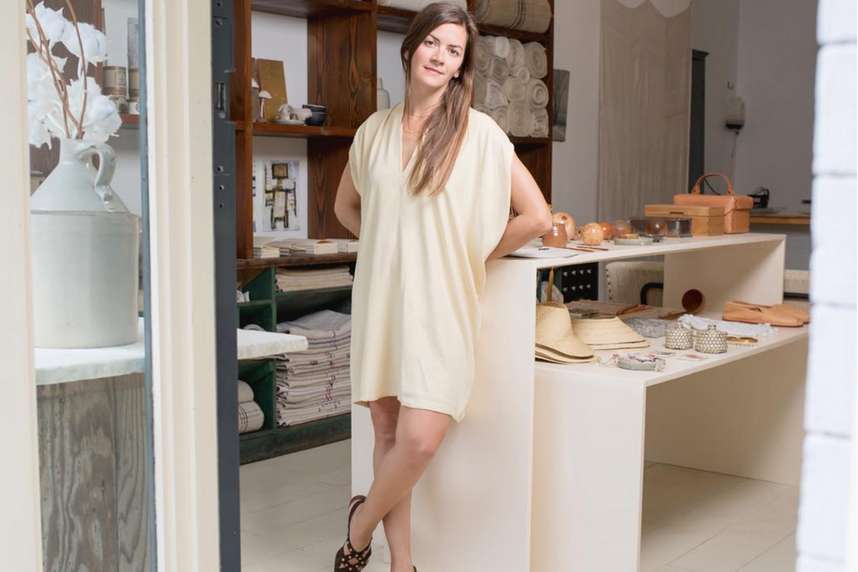 If you have time, or a sunburn, there is some great shopping to be done in Asbury Park. One family, in particular, is doing a great job styling the neighborhood. Sweet Joey’s, a vintage store owned by Joey Pisch, is like a dream closet edited by an early adopter with an eye for upcoming trends. High waisted levis, 90’s band t-shirts, oversized colorblocked leather jackets, and the perfect wide legged army pants– all at affordable prices. We spent hours in the store and one of my friends may have relieved it of most of the merchandise by the time we left. The owner’s father, Vlad Pisch, was on hand making perfect custom denim (starting at $300) in the back, which with him is an art form. He takes crazy amounts of measurements for each pair, all while regaling customers with jokes and stories of his Czechoslovakian roots. Vlad’s simple yet beautiful work aprons are also for sale, and look stripped from the hippest Brooklyn woodwork shop. Up the street, sister Barbara Pisch, runs a pinterest perfect boutique called Patriae (which means “homelands”), that focuses on antique hemp and linen textiles from her family homeland. Think perfect linen tops, dresses, tablecloths all made in house. After spending time in NYC and Italy, she honed her eye. Additionally, there are precious homewares, straw bags and handmade soft leather shoes. I bought a wide-brimmed straw cap, which everytime I wear, someone has offered to buy right off my head. The talented Pisch family hasn’t just set up an enterprise in Asbury Park, they also share the values of the town: a vision towards sustainability, appreciation for history and a search for beauty in the everyday. Sweet Joey’s, 523 Bangs Ave., Asbury Park. Patriae, 713 Bangs Ave., Asbury Park. 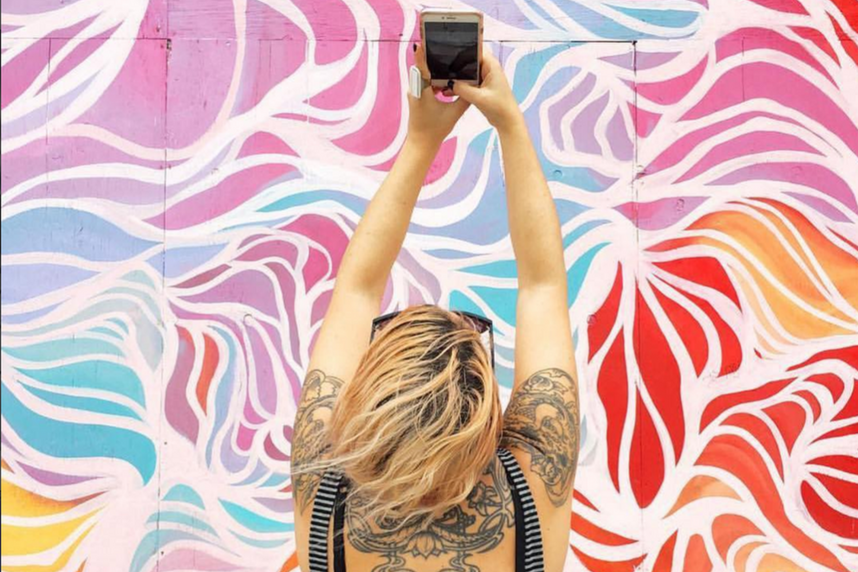 There is no way you would go to Asbury Park and miss the Wooden Walls Project, a public art initiative that was started in 2015. Just like the Bushwick Collective or the Berlin Wall East Side Gallery, this is an Instagrammer’s paradise with artist-designed murals covering wall upon wall. This beautification project adds vibrancy to the area, but is now also a destination in and of itself on the boardwalk. 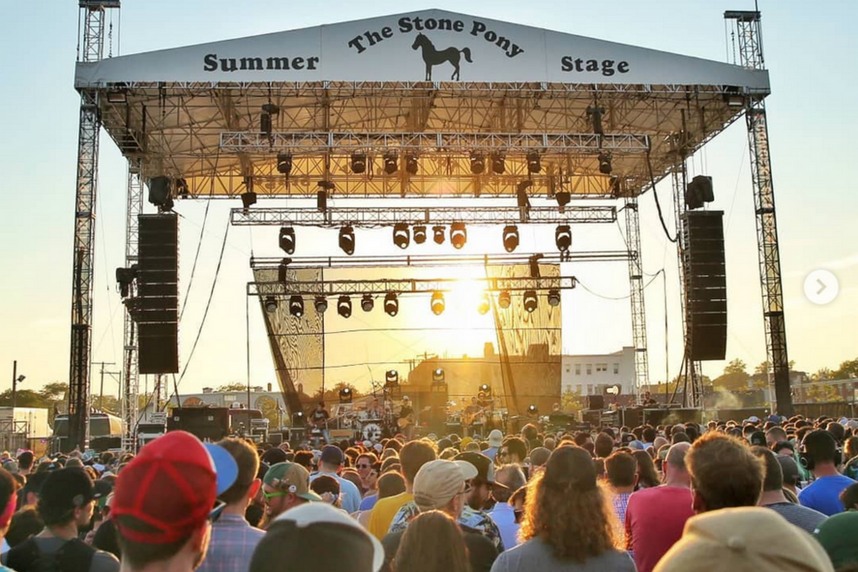 Go to The Stone Pony

Asbury Park is a town solidly rooted in rock n’ roll. The famed institution The Stone Pony is easily the reason behind that. This place holds secrets of the ‘70s in its hallowed halls, with legendary performances by Bruce Springsteen, Elvis Costello, Skid Row, The Ramones and so many others. Fun fact: Van Morrison shot a video here. But it’s not just a dusty relic; with an outdoor summer stage, the venue still packs in legions of fans. The night that we were in Asbury Park, there was a line wrapped around the block for Buckethead, who is known for performing while wearing a KFC bucket on his head and a Michael Myers mask on his face. The eclectic summer lineup includes Ziggy Marley, Franz Ferdinand, and Boy George and Culture Club. The Stone Pony, 913 Ocean Ave., Asbury Park.