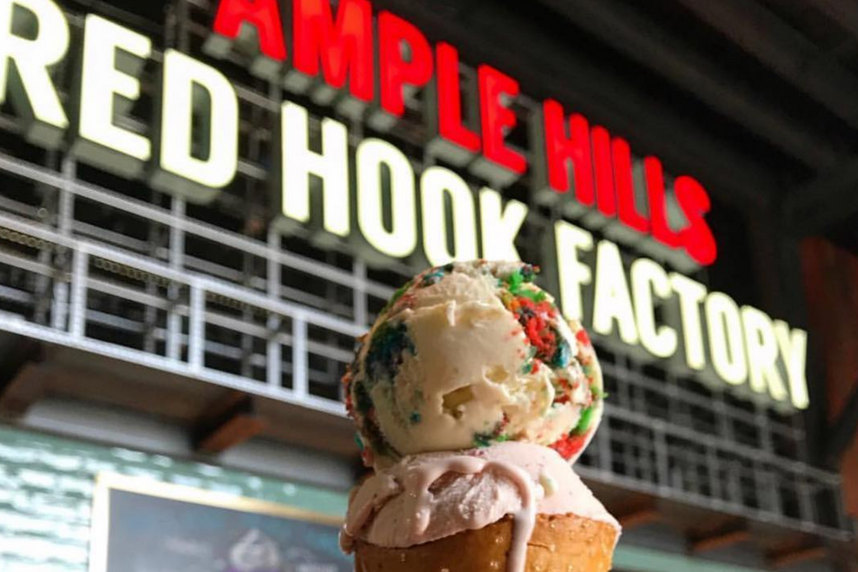 It’s already August. Whether or not your children are school aged or not, making memories during the rush of summer, before September, feels imperative. This is your last ditch effort to do all those things that you talked about in June. August might be one of the best times to explore the city with your kids, because everyone else has fled the stinky streets, and places that would normally be crowded are often now chill. There is a new ice cream museum, a pop up pool you may have forgotten about, movies (both indoors and outside), and a beachside art exhibit. What more could you want from summer? Wherever you are going, try to take the ferry there whenever possible and stay hydrated. 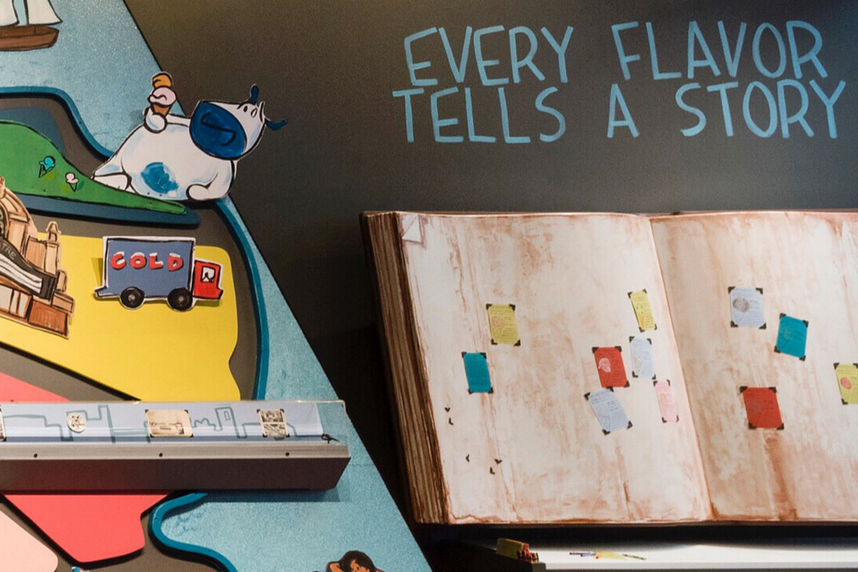 This new location of Ample Hills has been compared to Willy Wonka’s factory by Grub Street. The museum is supposedly interactive for kids and there is loads of ice cream. (No Oompas Loompas.) Photo: @amplehills

When I say Ice Cream Museum, you probably think of the Museum of Ice Cream Pint Shop in the Meatpacking District, which is not a real museum, and costs $33 a person. But what I’m actually talking about is Ample Hills Factory, a 15,000 square foot factory, museum and shop, that just opened in Red Hook and is completely FREE for the experience and you’ll just pay for your cone. The exhibit includes interactive elements like a model trolley car, a climb through tunnel and flavor smell stations. This location has their own exclusive flavor, The Hook, which is burnt sugar, stroop waffles and chunks of salted fudge. This is exactly the kind of museum that kids will love. Ample Hills, 421 Van Brunt St., Red Hook. 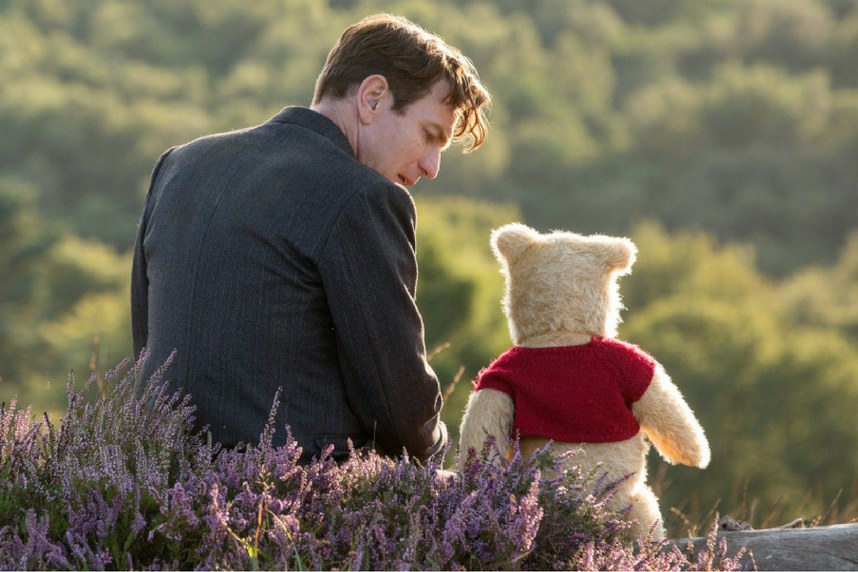 Nothing beats the humidity like sitting in the dark with some AC. Photo: Courtesy of Disney

This is the kind of Disney movie I prefer: a darker, weirder premise than the animated schlock usually thrown on the screen. Christopher Robin, which opens in theaters August 3rd would be a great companion piece to the Paddington series in which a fun-loving British bear perks up a  stodgy family. This one stars Ewan McGregor as the grown-up Christopher Robin, who has forgotten about the magic of childhood, and returns to Hundred Acre Woods to help his stuffed animals. Presumably he will find his way back to the boy he once was, but not without some adventures along the way. After a summer of disappointing kids’ movies, this one should be worth the time sitting in the AC. It’s rated PG, not G, so might be best for the slightly older crowd. 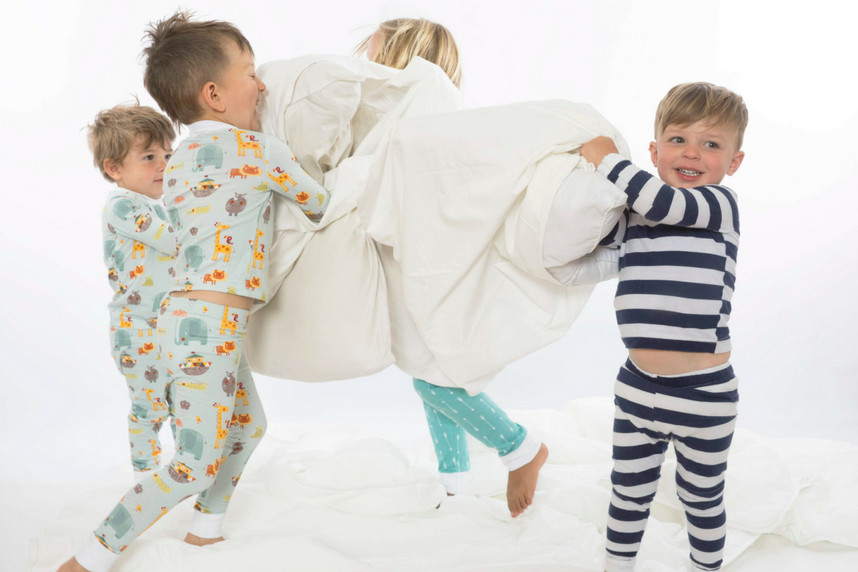 I haven’t tried these out, but they seem like they would be great for when your child is almost fully trained but not quite. Photo: Courtesy of Peejamas

BUY:…But no trace of Pee

Is one summer goal of your child’s to potty train? With many schools requiring fully trained kids at younger and younger ages, this can be a stressful time period. Or maybe, like so many kids, your child has been potty trained for eons during the day but the evenings are another story. There is nothing worse than being forced to wake up in the middle of the night, bleary eyed, to change soaked sheets. That’s why I like the sound of Peejamas, cute gender neutral pajamas that are completely absorbent holding 15x their weight in fluids. I haven’t tried them, but supposedly they can be washed around 300 times before they lose their absorbency. I would guess the best way to use these is if you have your own washer dryer (I don’t) but I’d still use them and rinse and hang until laundry day. Also, I’d be saving diaper money and landfills. Plus, you can keep using them after your child is trained. On sale now for $39.99 and free shipping if you buy two pairs. Available online. 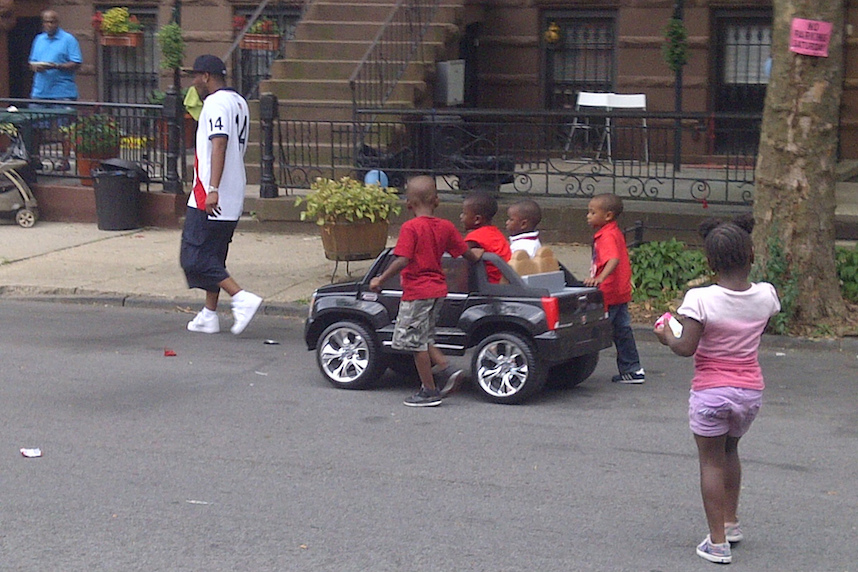 Block parties don’t seem to happen as often as they used to in Brooklyn. Take your kids to one now before they stop happening altogether. Photo: By Billychic via Flickr

There’s a long tradition of block parties in Brooklyn, but it may have been a minute since you’ve been to one. A summer celebration where neighbors can dance, eat and socialize is a great way to build community. We Are Brooklyn: A Community Block Party, presented by the Intergenerational Community Arts Council (ICAC), a program of BRIC and University Settlement led by Artist-in-Residence Najee Omar is going to transform Myrtle Avenue into a party on Saturday, August 4th from 1pm-5pm. There will be live music, DJs, collaborative art projects, spoken word performances,  art-making activities (including screen-printing and mural-making), a photo-booth, a pop-up market, drumming, Double Dutch, street games, and basketball challenges. It may not be the thing to cancel your weekend plans for, but if you happen to be in town, why not swing by with the whole family? Outside of Ingersoll Cornerstone Community Center, Myrtle Ave at Fleet Place, Fort Greene FREE. 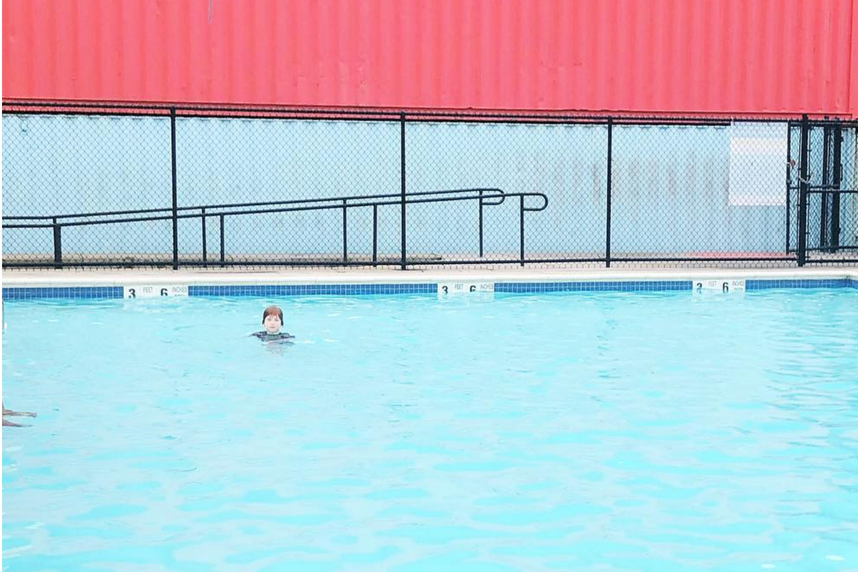 If your impression of public pools are crowded and polluted, think again. Photo: @later_nyc

SWIM: Take a dip before the crowds come

On a recent slightly overcast midweek day where my son didn’t have camp, we went right at opening time (10am) to the Pop Up Pool in Brooklyn Bridge Park. Expecting a mass of bodies, babies peeing in the pool, and a long wait, I came prepared with books for waiting and a bad attitude. Imagine my surprise, when the pool was completely empty and we had the whole thing to ourselves. This may have been an unusual occurrence, but the staff told me that the pool is usually pretty empty in the mornings and fills up as the afternoon continues. My son and I swam laps in the pool, and he showed me the strokes he’s learned through Imagine Swimming (the only swim class that has actually worked and may be worth the cost and aggravation!). We did handstands and somersaults, and genuinely acted loony. It’s only 3.5 feet deep, which actually is plenty deep to swim around. The wristbands they give out when it is crowded are good for 45-minutes of swim time, which ended up being more than enough and when we turned into prunes it was time to get out anyways. Make sure to allow time to chill at the “beach” and drink a Lizzmonade from the concession stand afterward. Pop Up Pool near Pier 2 at Brooklyn Bridge Park, 334 Furman Street, Brooklyn Heights. 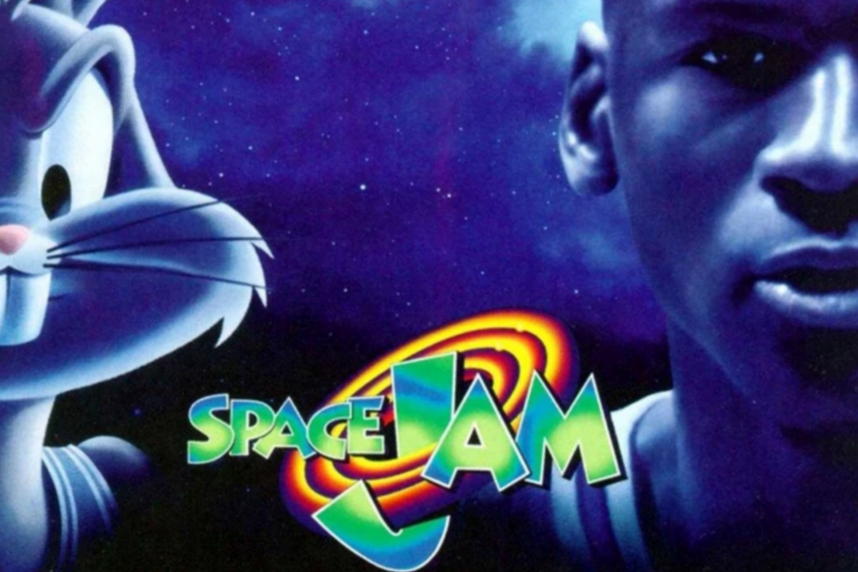 Common Sense Media recommends this film for ages 7 + up. Remember the Looney Tunes characters can be violent. Photo: Space Jam

Just in case you forgot, Space Jam, the movie, features an intergalactic amusement park called “Moron Mountain” and stars an all-jock lineup of Patrick Ewing, Charles Barkley and Michael Jordan. It is a basketball game between real and animated superstars that piqued the imagination of an entire generation, all while holding a low score of 38% on Rotten Tomatoes. It’s so bad, it’s good. Come see for yourself on Wednesday, August 8th, 6pm-11pm as part of the Prospect Park A Summer Movie Under the Stars in partnership with Brooklyn’s Nitehawk Cinema. The soundtrack alone will be worth the trek. While the most popular track is “I Believe I Can Fly” by the predator R. Kelly, other less controversial (and better!) hits include “Basketball Jones” by Barry White and Chris Rock, “Fly Like An Eagle” a Steve Miller Band song covered by Seal, and “Pump Up the Jam” by Technotronic. Bring some picnic supplies (and a bottle of wine) and you and the kids will have fun with this crazy film. DJ Dr Israel will be spinning hits beforehand and the movie will start around 8pm. FREE. Prospect Park, Long Meadow, Park Slope.

➤ RELATED: Print our August movie calendar and make the most of the last month of summer 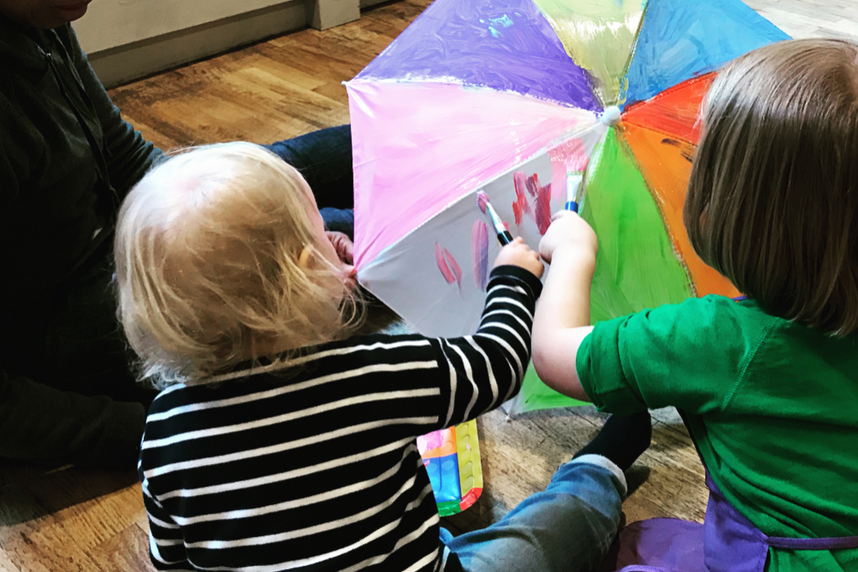 Drop in art classes can be a game changer in the hot weather. Photo: Recess Dumbo

PLAY: Get Crafty with Kids

Who doesn’t love kids’ classes? During the summer months it’s hard to stick to a schedule though, and not to mention figuring out make-up classes. The Pop Up Jr. classes at Recess in Dumbo are just the ticket. These drop-in craft classes are for kids 1.5- 4 years old (with an adult) and they actually make something useful in the process. Tuesday, August 14th from 2:30pm- 3:15pm, make a flower pot whale pot and learn about the ocean. A teacher will read a book and then kids will use paint, glue and beads to make a take-home craft. Afterward, stick around for playtime in the air-conditioned playspace. Also, take advantage of the long summer days and sign your kid up for an evening pajama party, while you take a date night. It’s the most fun your kids will have with “babysitting”. Pop Up Jr. Classes: $20/ per child. Recess Dumbo, 81 Washington St. Dumbo 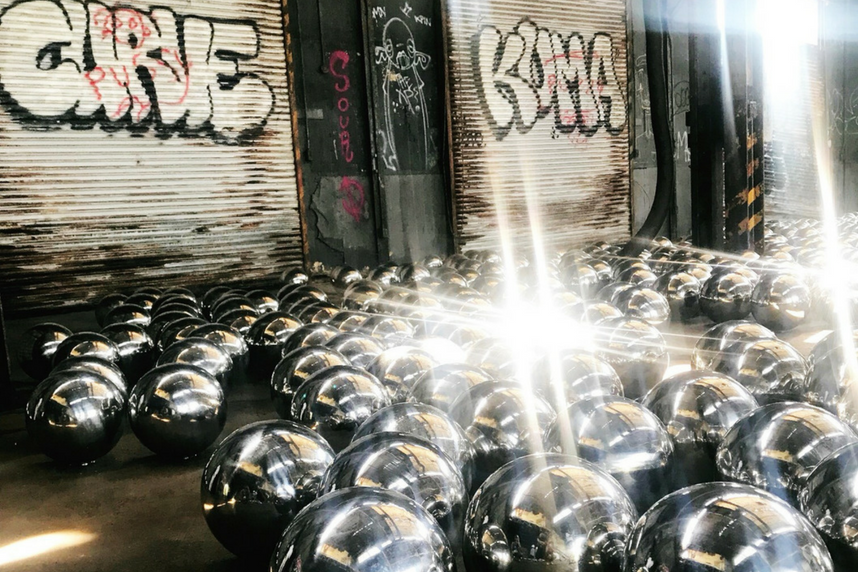 If nothing else, this will make a great backdrop for your family photo. But also, your kids may be inspired. Photo: @later_nyc

If you haven’t been out to a Brooklyn beach yet, then this is your last chance. It’s also your last chance to go to the Rockaways and see Narcissus Garden by artist Yayoi Kusama. Imagine an “Immersive Instagram Experience” but done by an actual artist who has been working since the ‘60s and backed by MoMa’s PS1, instead of a corporate marketing team who threw something together in a month. That said, you’ve probably been seeing photos of these mirrored spheres all over your feed, and this is your last time to see the exhibit before it closes on September 3rd. Your kids will like it as much as you do, if only because it is shiny and interesting. The show is in a former train garage in the barracks of Fort Tilden, and the metal reflects the industrial abandoned building for a nice effect. This is only the second time this space has been used for an art exhibition; the last time was 2014 with Patti Smith. Pro tip: Go early in the day, so you won’t have to wait in line very long. They only let in a few people at a time, and all bags must be left on a table outside. It is FREE and open to the public from 12pm to 6pm Friday through Sunday. Fort Tilden (169 State Road) is accessible by the Q22 and Q35 buses, the A train/shuttle to 116th St, via NYC Ferry from Wall Street/Pier 11 (from Manhattan) or Brooklyn Army Terminal (from Brooklyn), and via bicycle. Parking is available at adjacent Riis Park. 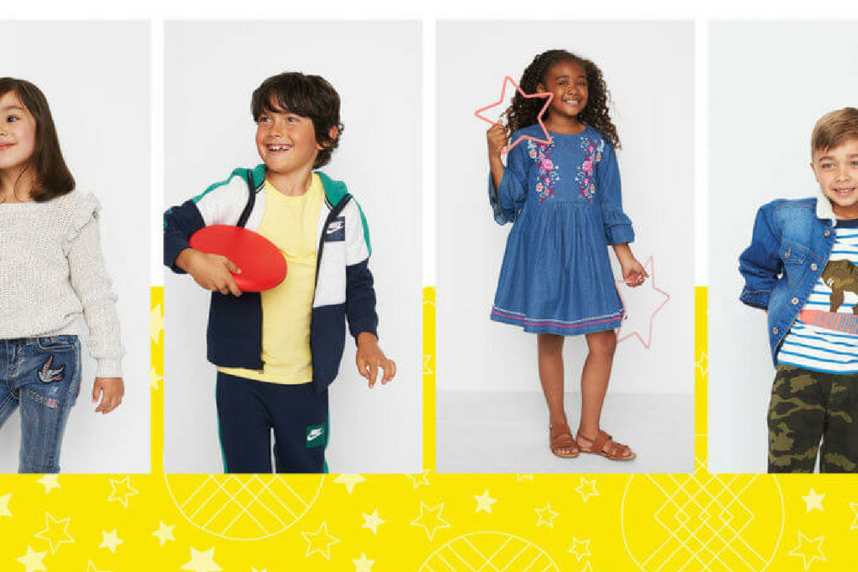 Obviously supporting local businesses is much better, but if the other option is chain stores, this might just be easier. Photo: Stitchfix

Back to School shopping sucks in Brooklyn. It usually entails buying some crap pants at Children’s Place, a couple of graphic tees from Target and a sweater from H & M. This might be the only reason I am pointing out the newly launched Stitch Fix Kids. I hate algorithms and my personal experience with Stitch Fix has been wildly hit or miss, but given that my experience with clothes shopping for kids usually results in me plowing through unkempt stores, grabbing anything in the right size and then calming myself down by overeating at a food hall, I think this subscription might be worth it. (If you know a better brick-and-mortar way, please tell me.) At first glance, the clothes advertised look pretty cute. And just like the adult version, the $20 you pay for the “styling fee” goes to the clothes you choose to keep, with a hefty discount if you keep it all. But this box has 8-12 pieces in it (instead of 5), so presumably one box would get your kid in good shape for the school year. Leggings start at $10 and dresses at $18. Available online.