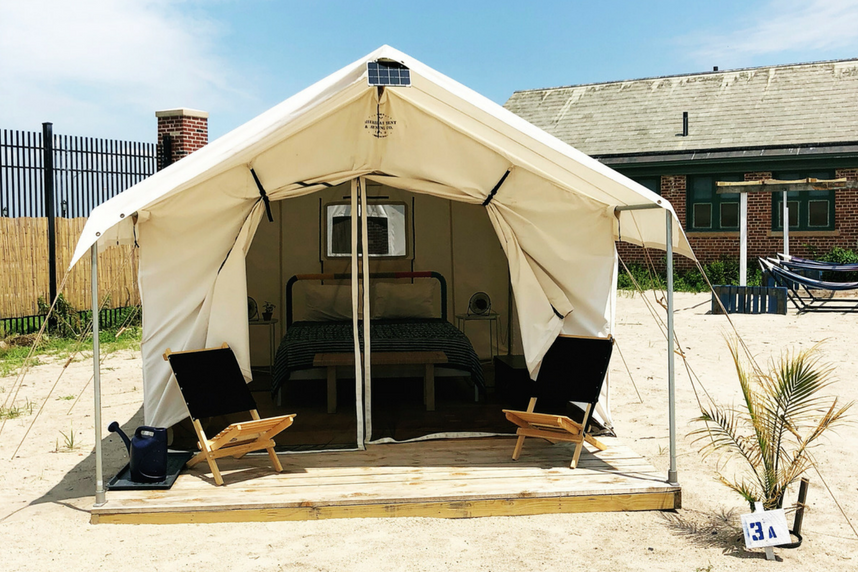 At Camp Rockaway, safari tents, luxury mattresses and bedding mean even the most particular sleeper will be comfortable. Photo: @later_nyc

Everyone is “glamping” these days. By everyone, I mean the people paying up to $1000 for tents at Collective Retreats on Governors Island and the influencers on my Instagram feed. (BB Writer, Georgia Kral, even did a round up of the best places to glamp or camp near NYC.) Is it a luxury gimmick? Is all glamping created equal? Most importantly, does it include s’mores? When Camp Rockaway offered us a free night of glamping, in return for an honest review, I was nervous. The last time I camped, I sat around a fire in Big Sur unknowingly burning poison sumac and ended up at the ER the next morning. Yet my city-born child has never even seen a sleeping bag, so this seemed the perfect opportunity to go all in. I packed an overnight bag. 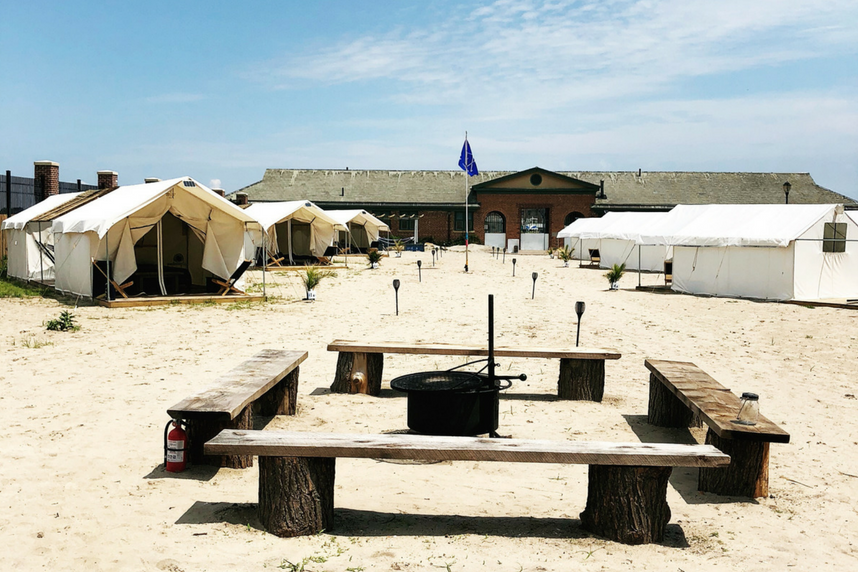 When we arrive at Jacob Riis Park, the parking lot is empty. The sky is dark. I jump out of the car and have to wander around for a bit to even find the tents, which are tucked out of sight, away from looky-loos, behind the new Jacob Riis Beach Bazaar. You can’t see them from the beach or the parking lot, but they are a mere yards from the water line. By the time we’re loading in our bags, the torrential downpours start and we are suddenly completely drenched. The blinding rain has blown out our umbrellas, so our “check-in” consists of being wrangled directly into a spacious tent. Inside, my 8-year-old child (who has mercifully stopped screaming), my husband and I drip all over the floor.  “Was that a sandstorm?” my son asks. The tents are built on wooden platforms, and everything inside is dry and serene; it’s quiet except for the cozy hammering of rain outside. We’ve stepped into a fully furnished room: a solar panel outside provides the overhead light, solar paneled fans whir, and plants wave from a bedside table. It’s more spacious than my bedroom. We have arrived at Camp Rockaway. 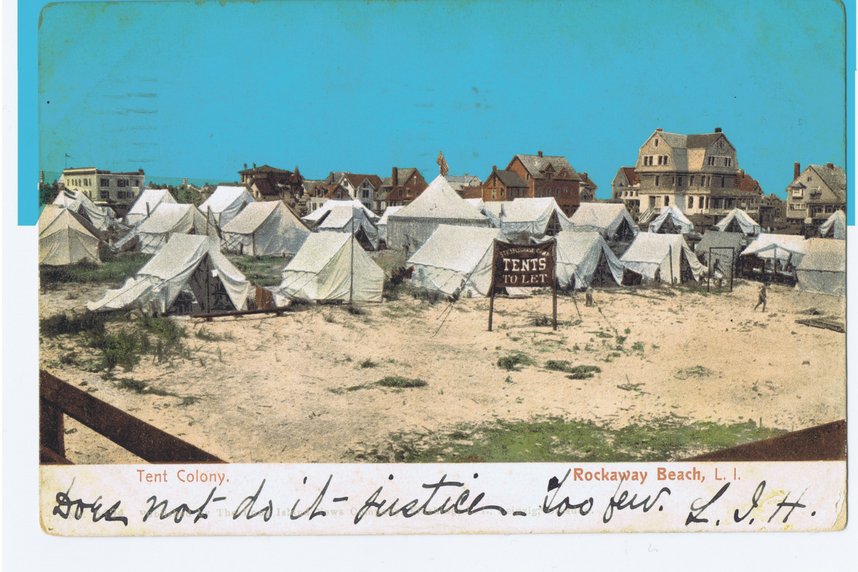 Camping is in the Rockaway’s DNA. This isn’t some developer trying to make a buck, it’s about preserving history. Photo: Courtesy of Camp Rockaway

Once we change into dry clothes, the rains die down. I am directed to Kent Johnson, the visionary behind Camp Rockaway. Years ago, he had an idea to build something out here for surfers to “maximize the multi-day swell events.” Even though the Rockaways are so close, why should you go home every night? As an architect, he was interested in structures, and he started to do some research. “There were hundreds of these tent beach colonies in the early 1900s. People stayed for a whole summer,” he explains. “The outside [of the tents] were customized with seashells.” That was it—he brought his idea to Kickstarter, raised over $50,000 in 2014 and started calling up the mayor’s office and community leaders to get this idea off the ground. Last summer was the pilot program, and it was such a success that it became a seasonal fixture. It’s one of those things (like developing the NYC waterfront) that is so obvious that it’s crazy it wasn’t already a thing. New Yorkers don’t have room to store tents and sleeping bags in their closets, but they still want a chance to camp on the beach. 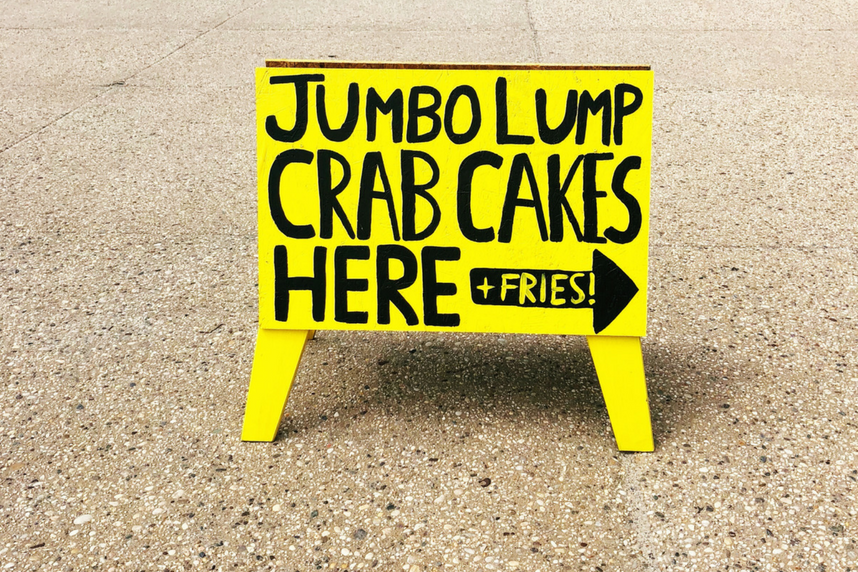 If it wasn’t raining, this is what I would have had for dinner. (Instead, I had it for lunch the next day.) Photo: @later_nyc

8:30pm, Dinner on the boardwalk (or pizza at the camp)

Usually the new concessions at Jacob Riis Beach Bazaar (right behind the tents) would be open at this time, but due to the downpours, they have closed up and left for the night. Musser’s Famous Maryland crab cake sandwiches by the founder of Burger Supreme; beautiful poke bowls in a pineapple by Boba Poke; Fletcher’s BBQ ribs; The Meat Up’s Salty Dog; and Ample Hills ice cream scoops are just a taste of the selection. Most important: there’s a beach bar that is open until sundown, serving rose on draft and craft beers right on the boardwalk. All of this was now closed. For us (and others who were counting on the concessions), the staff at Camp Rockaway kindly order pizzas. It tastes delicious sitting at a picnic table over a game of Scrabble. (The camp has board games, card games, beach toys, and anything else that you could ever want to maximize a camping trip.) 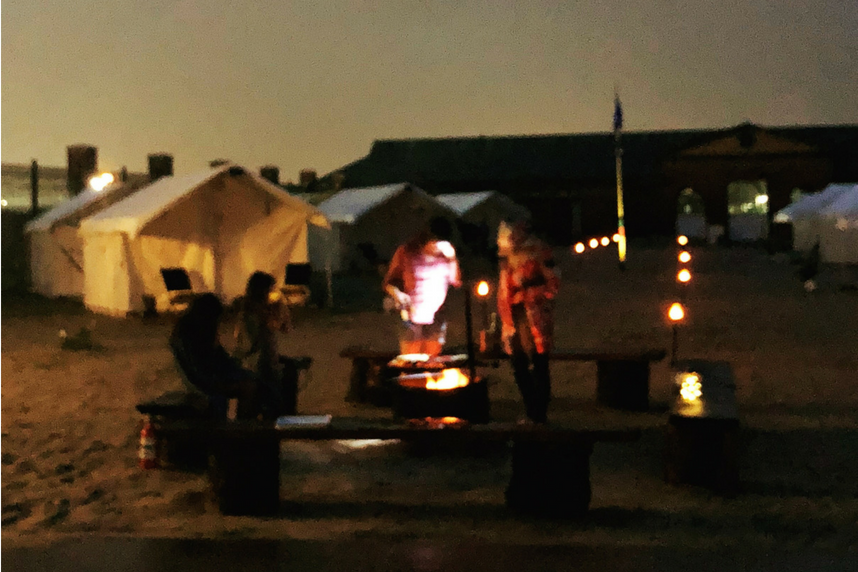 Everything tastes better charred in the fire pit. The camp even provides marshmallows and sticks. Photo: @later_nyc

The bonfire is blazing at this time. There is a grill in the pit to allow for actual cooking, so you don’t have to stick the meat in the fire like a hobo. (In the morning, campers were also grilling bagels or frying eggs on a pan.) That said, the camp also provides long pronged fire sticks. We use these for eating s’mores, which we brought, but which the camp also provides. Sitting on the benches around the fire, there is a sense of community in the firelight. It’s so easy to make memories when everything is provided for you. 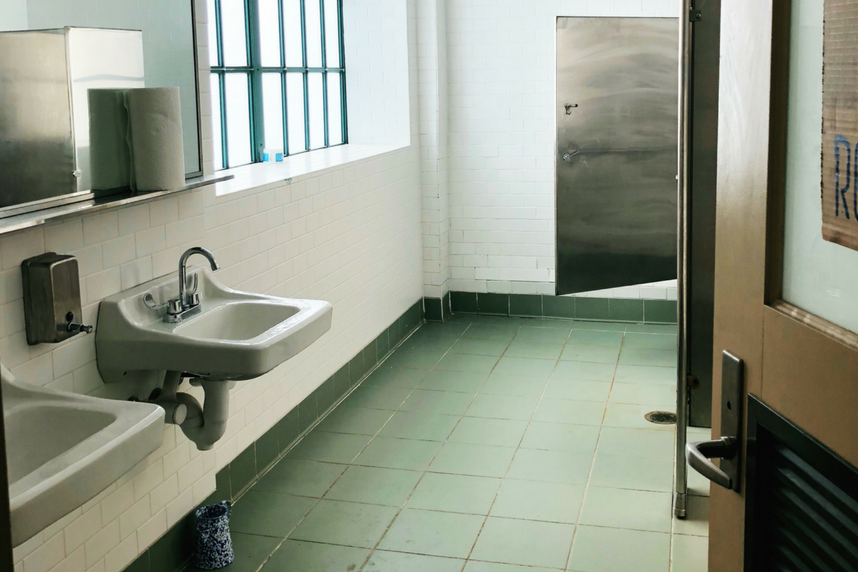 The bathrooms are no-frills, but very clean. Photo: @later_nyc

It’s dark and I’m yawning. I grab a fluffy towel and flip-flops from my tent. Due to the occasional hurricane blowing through the building windows surrounding the camp yard, there is a chance that there might still be tiny shards of glass somewhere in the sand. Probably not. But they recommend wearing shoes at all time just in case. The communal bathrooms are gender neutral, clean, yet no-frills. If you are used to campgrounds with latrines, these will seem luxurious. If you are expecting a bathroom attendant, you will be disappointed. We brush our teeth alongside others who were also preparing for bed; it’s a communal vibe. We say goodnight to everyone at the campfire and head off to sleep. 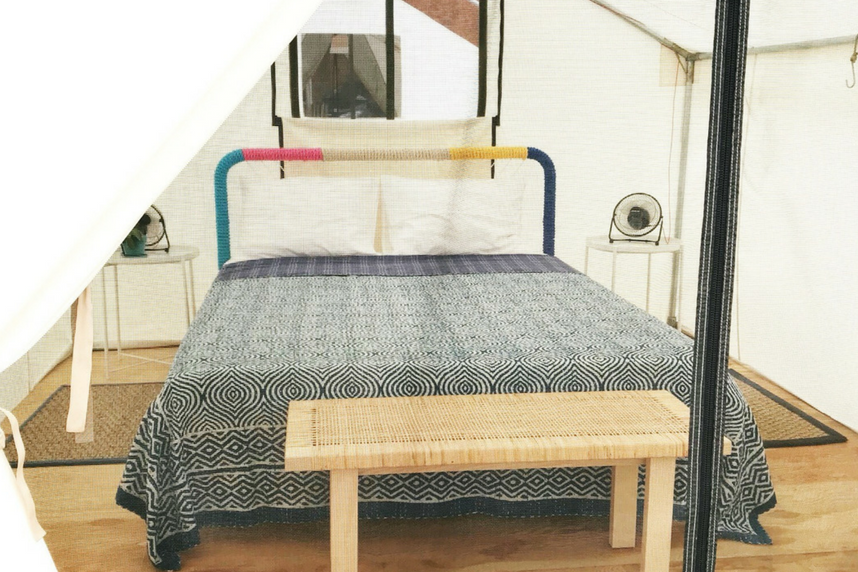 At 10pm, the beach is closed and it’s quiet time within the camp until 8am. The gates are all locked and secured, so no unwelcome guests will be traipsing through. Kent gives us a little solar-powered lantern in case we need to find the bathroom at night. Our tent is ablaze with the overhead solar light, illuminating the queen size bed and a child cot with a sleeping bag. I’m used to summer camping being excruciatingly hot inside the tent, but the temperature is perfect with a soft breeze from the solar fans. Also, no mosquitos! The camp provides earplugs, but I recommend being lulled to sleep by the ocean waves. Also, they provide a pitcher and mugs, which you can fill up from their water canteens. The only thing not provided is an eye mask for the morning, if you’re planning to sleep late. Also note: a Caspar mattress really is everything it’s cracked up to be, and you may just have the best sleep of your life. 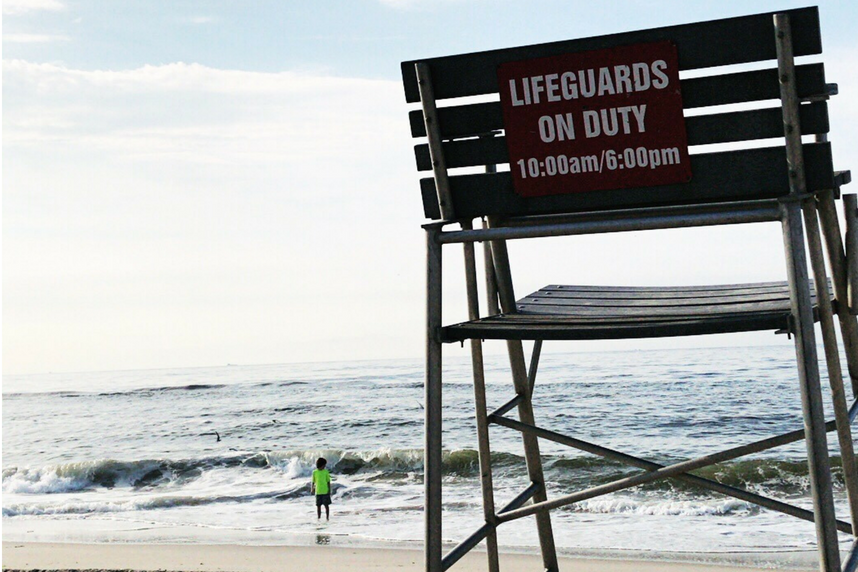 Camping at the beach allows you unparalleled private access to the ocean. Photo: @later_nyc

Have you ever seen the Rockaways without a single person on its sand? I have. At 7am, the camp sets out a coffee bar and unlocks the gates. We take advantage of our early rise and trot down to the water. We lie in the sand on towels. The vendors slowly open the beach stores and concessions. The water is surprisingly warm, and the waves are big after the storm. Surfing is allowed at this beach before the lifeguards come at 10am. Lime bikes, a dockless bike share program, is available now in the Rockaways as of mid-July. You may want to bike down for an early breakfast at Cuisine by Claudette or to Fort Tilden to see the Yayoi Kusama “Narcissus Garden” exhibit in the MOMA PS1 space. Either way, Camp Rockaway lends portable solar phone chargers if you are low on juice and want to take one with you. (They also have a solar-powered charging station in the communal tent back at the camp.) 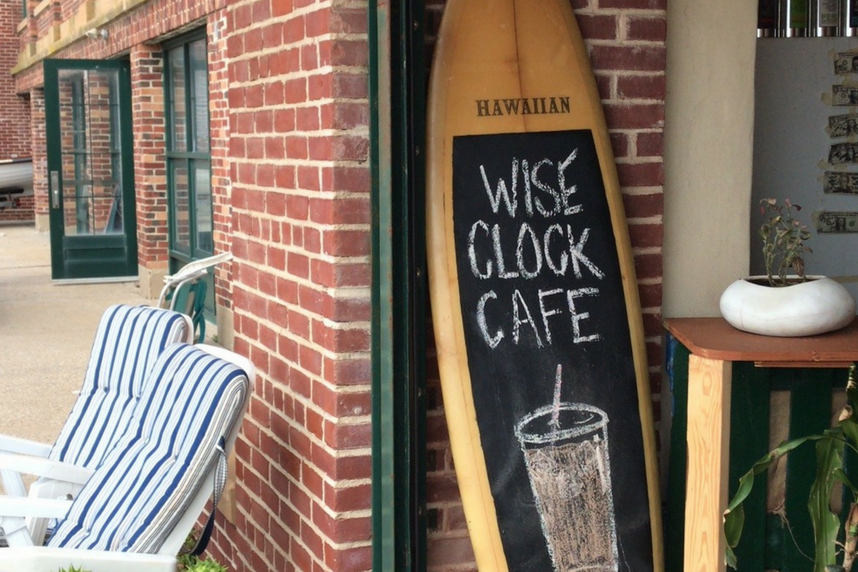 This where you’ll get your avocado toast or rainbow bagels, if you’re in the mood. Photo: @later_nyc

9am, Breakfast of champions

Maybe instead, you just want to lay around the beach, like I do. Around 9am The Wise Clock Cafe opens in the Beach Bazaar. Here you can get things like cold brew, rainbow bagels, smoothies or avocado toast. It’s cash-only though (and their onsite ATM is broken) so I’m happy I have bills. Hanging out here for the morning will give you a good glimpse of the Rockaway scene: surfers, kids, bikini-clad influencers, and old men in speedos. It’s the Venice Beach of Queens. Kent Johnson, the founder of Camp Rockaway, says, ”I appreciate working with Riis Park Beach Bazaar because they aren’t too corporate,” he says. “They let the Rockaways funkiness exist and are supportive of it.” You’ll find all that funkiness here, no problem, as it hasn’t been sterilized into a generic luxury glamping experience. This tent, this beach, this concession stand are all unique to the Rockaways. 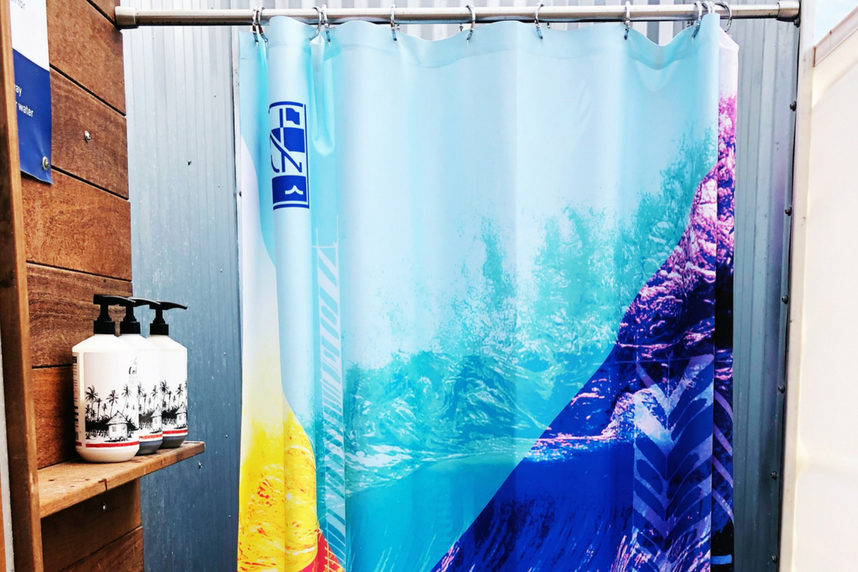 The outside showers are a thing of beauty: solar powered, water conserving, and stocked with organic products. Photo: @later_nyc

“The best outdoor shower I ever had was in a beach in Thailand covered by palm fronds,” says staff member Sophie Henderson, as she points out the shower. “This is the second best.” The solar showers are metal stalls with a shower head fixed to the ceiling. You press a button and the shower goes on, without a hot or cold gauge, because the water is heated by the sun. Organic shampoo, conditioner and body wash are at your disposal. After five minutes, the shower will shut off and takes another three minutes to reset. I am worried about being caught with soap in my hair, but I find this is a sufficient amount of time, and I helped conserve water. 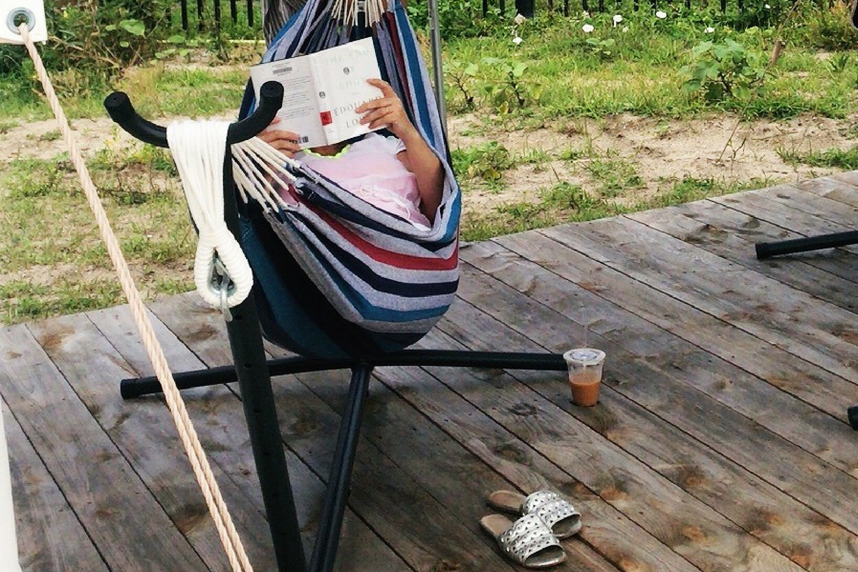 Each tent has a hammock directly behind it. There are more than enough available hammocks to go around. Photo: @later_nyc

The best place to laze in the sun is the hammock directly behind the tent. It’s shaded by a thatched roof. There really is nothing better than drinking a cold brew, reading an engaging novel, while swinging softly in a hammock. I feel like a marsupial in her mother’s pouch. I almost stay another night just so I could take this inevitable nap. 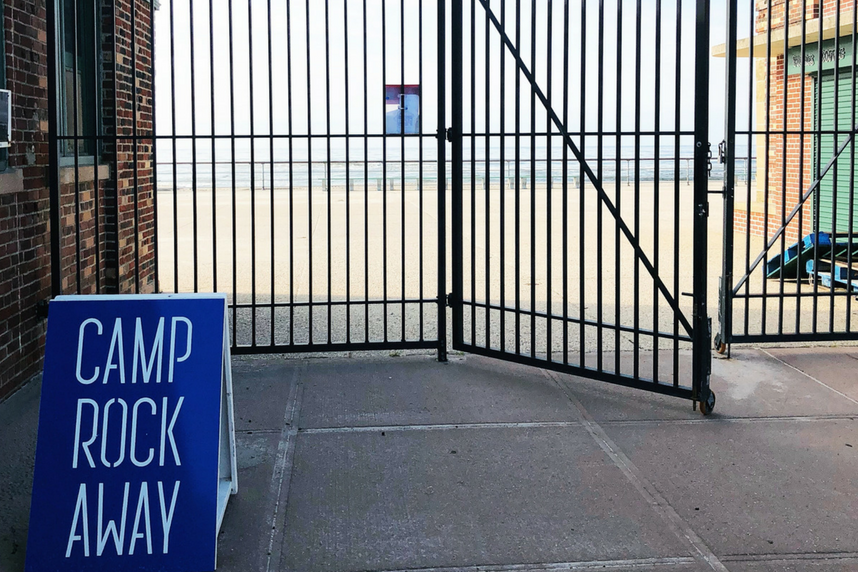 It is hard to leave. The sand is in our hair and between our toes, while the ocean still calls out to us. Originally, I thought that we’d want to leave early, but in fact we are already discussing how to return. My son asks to stay for the week. There are other children to play with, sand castles to build, and more marshmallows to roast. We are only in Queens. My husband wants to commute to work from here. For me, the thing Camp Rockaway gets right: glamping should be about experiencing the outdoors, not being in an anesthetized, pretend hotel room. “I want to still be in nature,” Sophie Henderson, a camp staff member explains. “I don’t want an air conditioner in my tent.” Camp Rockaway is offering the best of both worlds, authentic nature for creatures of comfort, with a side order of that Rockaway funk.

If you have the time, the best way to go will be the ferry (with the possibility of having an onboard bar). But you can also take a subway and bus, or if you have a car it is a quick drive from Brooklyn. Detailed directions are here, and an FAQ about what to bring is here. Camping happens rain or shine from June through October. Reserve a two-person tent for $249/ night on weekends and $195/night on weeknights.