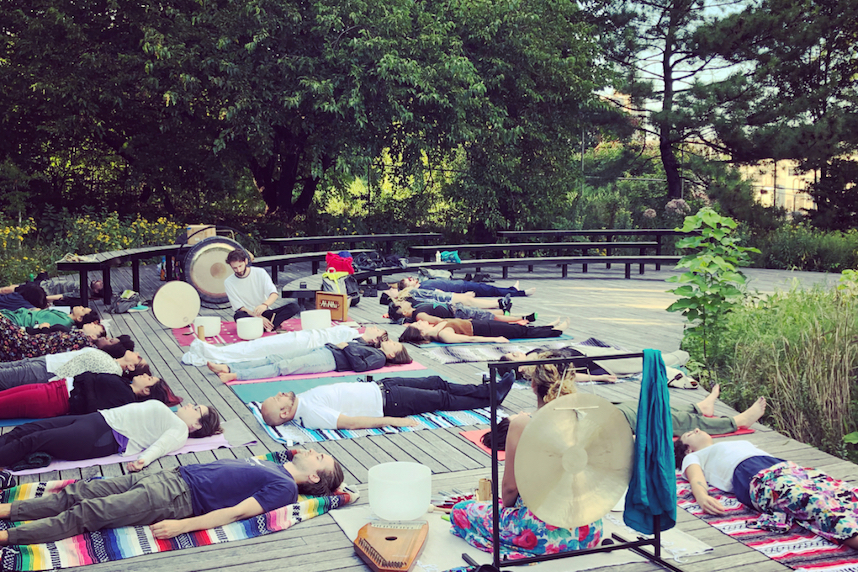 The Naval Cemetery Landscape is the prettiest park that you’ve never noticed before. It hosts its last free soundbath of the season on Sept. 27 Photo: @bkgreenway

Imagine a cityscape where a protected pedestrian and bike path runs all along the waterfront, connecting parks and public spaces along the way. Families can bike from one end of the borough to the other, to explore Jamaica Bay on a summer’s day or commute to work in the Brooklyn Navy Yard. This plan is actually in the works and the Brooklyn Greenway Initiative is the organization behind it, providing the vision and procuring the funding.

The Brooklyn Greenway Initiative was formed in 2004 in order to develop, establish and steward “a thick ribbon of green” around the borough. Since then, the nonprofit has channeled over $200 million dollars of public and private funding into what will eventually be a 26-mile greenway along Brooklyn’s coastline. Currently, they organize the Epic Ride bike event and a Half Marathon and 5K, which is coming up in October. They have also built and maintain the Naval Cemetery Landscape in the Navy Yard, which was always behind a fence, even though the remains of the dead were moved to Cypress Hills in the 1920s. Now it is a beautiful park with an elevated walkway that is open to all, hosting free yoga classes, soundbaths, and public art. 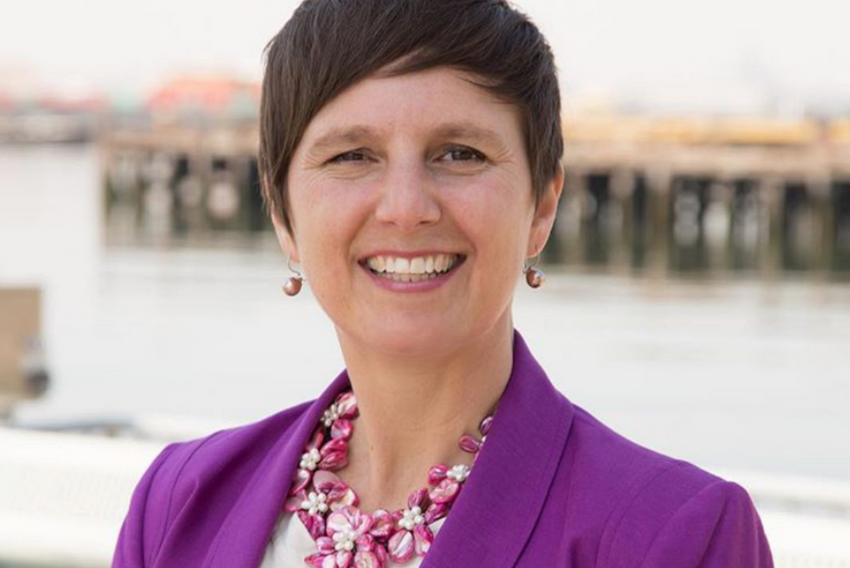 Terri Carta has been hired as the first Executive Director of the Brooklyn Greenway Initiative, and yes, she loves biking. Photo: Burcu Avsar

This year the organization hired its first Executive Director, Terri Carta, to help move their vision forward. We spoke with her about her new role in the organization and what we can expect to see and when along its path to completion. Pro tip: You’re going to want to invest in a good bike and helmet.

BB: What is the overall plan for the Brooklyn Greenway? What does this mean for Brooklyn residents?

TC: I’m particularly excited about the potential for the Greenway to connect people to the waterfront and the neighborhoods along it — providing a healthy, safe, and enjoyable route for residents and visitors to explore the layered history and growing waterfront amenities. Of NYC’s 520 miles of waterfront, approx 113 miles are in Brooklyn.

In short, the overall plan is to realize the Brooklyn Waterfront Greenway as a critical connector among waterfront neighborhoods, a means to waterfront access and increased resiliency, and a safe route for walkers, runners, and cyclists.

Why is the waterfront experiencing such rapid development?

As Brooklyn developed from a collection of small farming communities to a major industrial hub, Brooklynites’ relationship with and connection to the waterfront was severed over time, both physically and figuratively.

The first commercial uses (ferry, shipping and storage warehouses) were developed along the Brooklyn waterfront in the mid-19th century, spurring nearly 150 years of continual industrial development. By the turn of the 21st century, globalization and supply chain modernization changed how Brooklyn’s waterfront would work in the future. Civic and business leaders, environmentalists and others turned their attention back to the waterfront.

As Brooklyn began the painstaking process of de-industrializing the waterfront, the borough was also becoming one of America’s hottest real estate markets with ample opportunity for commercial and residential developers. Brooklyn waterfront neighborhoods like Williamsburg and DUMBO garnered worldwide desirability which drove rapid design and construction. 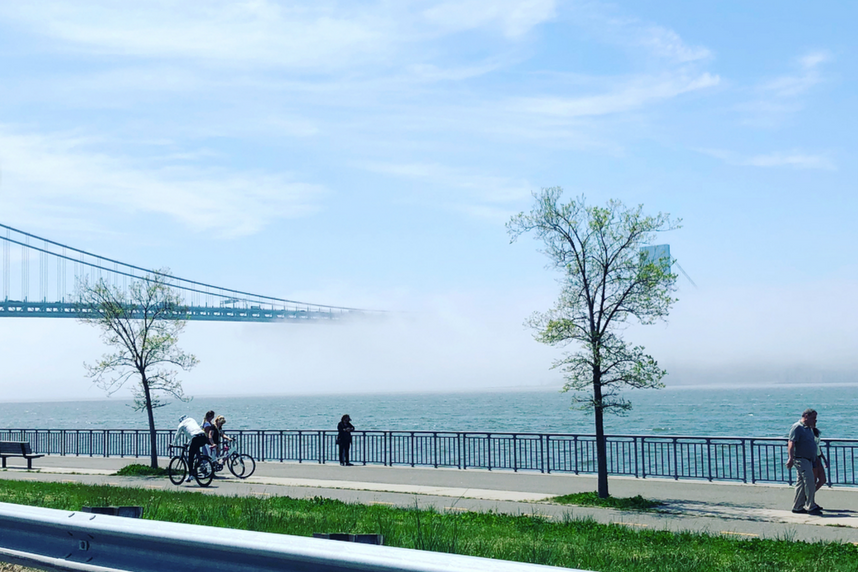 This is just a fraction of the proposed 26-mile route of the Greenway, with waterfront views and paved protected pathways. Photo: @bkgreenway

We understand that there is a 26-mile route of the greenway. Some of these segments are currently underway. What parts have been completed and how many segments still need funding?

Approximately 18 miles of the 26-mile route have been implemented to date. Major segments of new Greenway are slated to be completed within the next three years:

—Flushing Avenue along the south side of the Navy Yard

—Parts of the Greenway in Sunset Park

How far do you plan to extend the Greenway?

The vision for the Brooklyn Waterfront Greenway is that it comprises a thick ribbon of green along the entire Brooklyn waterfront — from Greenpoint to Jamaica Bay. The 14-mile stretch between Greenpoint and Bay Ridge (Owl’s Head Park) is our primary focus at the moment, but we haven’t lost sight of the larger whole — that the 14-mile north Brooklyn segment connects with the Shore Parkway Greenway south of Bay Ridge and out to Jamaica Bay. Some work is needed in south Brooklyn as well, including connecting the Shore Parkway Greenway all the way through to Jamaica Bay. 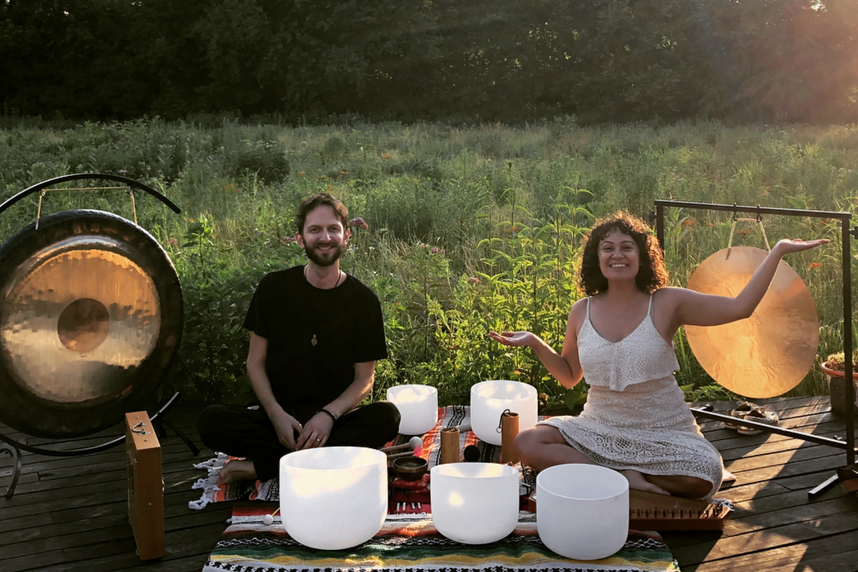 RSVP early for the free soundbath meditations in the Naval Cemetery Landscape, as they fill up quickly! Photo: @bkgreenway

What other activities and programs does BGI offer to the public?

BGI’s core work is collaborating with the city to complete the Brooklyn Waterfront Greenway as a protected and sustainably landscaped cycling, running, and pedestrian route to connect 500,000+ residents in waterfront communities to 200+ acres of parks and open spaces and numerous cultural and commercial corridors along the Brooklyn coastline.

BGI also built and now manages the Naval Cemetery Landscape at the Brooklyn Navy Yard — a 1.7-acre contemplative native wildflower and pollinator meadow that memorializes the cultural and natural history of the space as the Naval Hospital Cemetery and tributaries into Wallabout Bay before that. I think of the Cemetery Landscape as the perfect “speed bump” to slow down a busy day; visitors typically spend some minutes walking slowly along the elevated boardwalk and noticing the buzzing pollinators busy at work, or sitting on a bench to gather thoughts or talk with friends/family, then go about the rest of their day feeling refreshed and revived. The site hosts a variety of environmental education programs for school groups and youth, temporary art installations, and free yoga and meditation programs. [Ed. Note: Visitors can also stop by the Naval Cemetery for “Early Fall Evenings” every Thursday in September and October where the park will have extended hours through 8pm.]

BGI also organizes volunteer programs for youth, corporate, and community volunteers to help care for the Naval Cemetery Landscape and planted elements along the Greenway. To activate the Greenway and raise awareness of its existence and benefits BGI has an annual Epic Ride from Greenpoint to Riis Beach (which happened on July 21 this year) and the annual Brooklyn Greenway Half Marathon and 5K, happening on October 14, 2018. 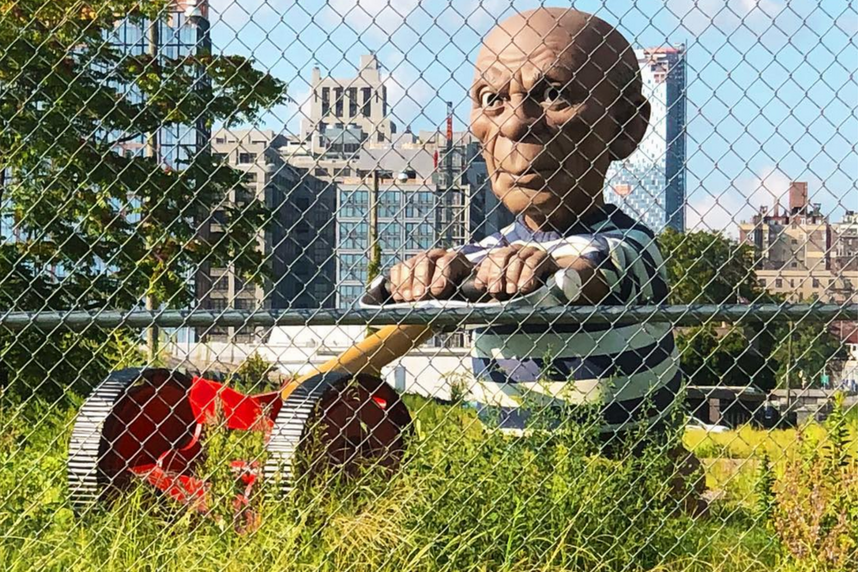 This 10-foot tall sculpture, titled “The Spanish Gardener” by artist Elliot Arkin, contemplates Picasso mowing the lawn.  It graced the Greenway in the Columbia Waterfront during the summer and has just been taken down. Photo: @later_nyc

When completed, will residents be able to bike around the entire borough safely on a single pathway? What precautions are being put into place for bike safety?

Yes. The most important safety element to be put in place is the implementation of a protected path – separating pedestrians, cyclists, and other non-motorized vehicles (scooters, roller blades, etc.) from motorized traffic. Trees and other landscaping along the Greenway also contribute to safety by calming traffic in addition to benefits related to human health and wellness, sustainability and resiliency measures, and opportunities for community engagement.

When will the entire Greenway be completed?

Completion of the Greenway is dependent on the availability of funding in the City’s capital budget year-to-year. However, with major new segments opening in the next three years, BGI anticipates that the 14-mile route, which has been the focus of BGI’s mission and work, will be substantially complete within the next several years. Planning to complete the larger 26-mile route is ongoing.

For more ways to assist with the completion of the Greenway, you can volunteer, donate money here, run the half marathon on October 14th or attend the BGI annual fundraiser on November 15th. Tickets are available for purchase here.