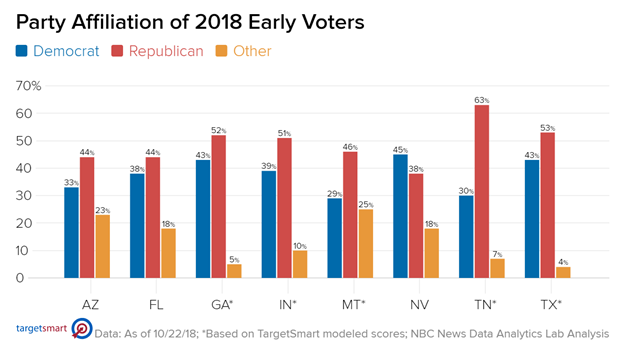 The midterm elections on November 6 are fast approaching, and based on early voting in key states, Republicans have already cast more ballots. This is not a big surprise: the most active voters in this country are white, wealthy, and older, and these demographic groups all tend to vote Republican. Plus, they’re fired up, too.

We can change this. While it’s easy to think that individual votes do not count, we have already witnessed what happens when Democrats and Independents sit out elections. Trump’s narrow win in three states—just 80,000 votes—made him president. Just last year, a local election in Virginia came down to just one vote.

Increasing turnout this year may be as simple as spreading the word to friends, family members, even online followers. Studies have shown that talking about your experience as a voter and hearing from others about voting, even on Facebook, makes a person more likely to vote in an election. It’s a positive form of peer pressure that encourages other people to become as civically minded as their own social circles.

Exercising your right to vote also helps to secure that right for everyone, as low-income Americans and people of color experience numerous barriers to voting in Republican-held states. (Trump is thought to have won Wisconsin, one of those three, tipping point states, because of its strict Voter ID laws.)

Use our guide below to get even more involved in these last crucial days by volunteering to canvass, phone and text bank for local and out-of-state candidates. We’ve found a few election night parties, too, to watch the returns while praying that our efforts pay off. Inviting friends to volunteering events or speaking about an upcoming election watch party may do the trick to get more of your people to the polls on November 6.

Do you know how close the races in your district are, or the one where your relatives live? The Times is tracking the most competitive elections. The League of Women Voters’ Vote411 site lets you research your own candidates and find your polling place. ProPublica’s Election Databot is keeping score on every House and Senate candidate, including Google search trends, fundraising levels and the Cook Report ranking of a candidate’s edge. 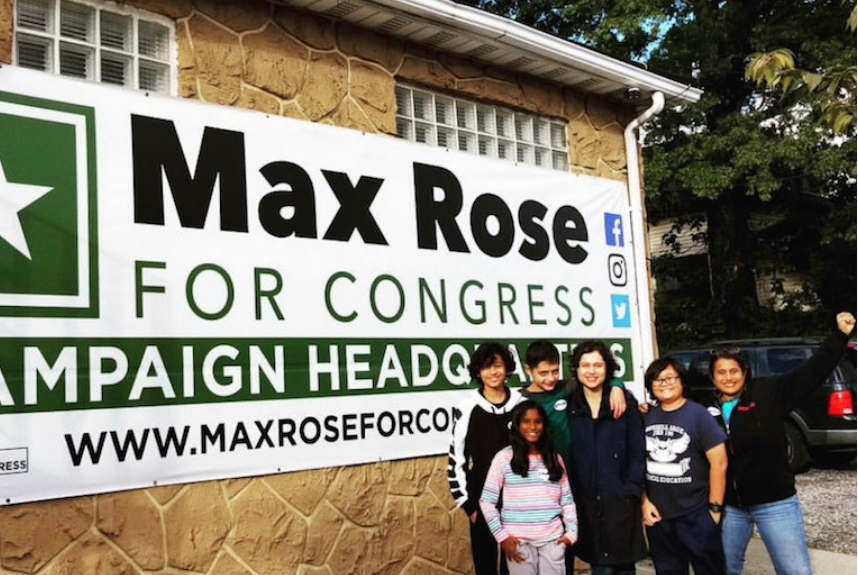 Swing Left is organizing canvassing efforts for Max Rose, the Democrat hoping to unseat Dan Donovan, the lone Republican U.S. Congressman representing NYC. NY District 11 includes Staten Island and parts of South Brooklyn, and the Cook Report rates this as a “Likely Republican” race. You can sign up to knock on doors Oct. 27-28 and Nov. 3-4 here.

If you happen to be upstate these next two weekends, you can canvass for Antonio Delgado, who is running for Congress against a Republican who won by just an 8.6% margin in the last election. The race is currently rated as a tossup, and there are multiple opportunities to knock on doors for him in the Hudson Valley.

Indivisible has a number of shifts for local and national candidates including Alexandria Ocasio Cortez, Andrew Gillum, Beto O’Rourke and Stacey Abrams this Thursday, Friday and Saturday, Oct. 25-27, from 2pm to 9pm.

You can also phone bank for Max Rose through Swing Left at their Brooklyn office in Bay Ridge (9718 4th Avenue, Brooklyn, NY 11209) and in Staten Island. There are several sessions every day leading up to and even on the day of the midterm elections.

If you haven’t phone banked before and aren’t sure about what to do, Swing Left has organized an online training session this Friday, Oct. 26 from 2 to 3pm.

Queens residents can head to Astoria for a night of phone banking and card writing on Oct. 27. They need all hands on deck that Saturday to write phone call scripts, look up numbers and addresses and also organize volunteers.

Want to volunteer from the comfort of your home, or even during a commute? You can download an app called Vote With Me to help you encourage friends in swing districts to vote. The app works on both Apple and Android phones and uses the idea that people are more likely to vote if someone encourages them to. It was designed by former Obama White House Staffers who saw that traditional methods like phone banking do not always work for every demographic.

Indivisible Nation BK is organizing a text banking event this Thursday, Oct. 25. Attendees will need a phone and a laptop to participate.

After you vote on Nov. 6, be sure to find an election watch party to hunker down with friends (and strangers) to find out the results. Here are a few options to consider for the night of:

Lady Parts Justice will host a happy hour at Distilled in Tribeca from 7 to 10pm. The event is free and gets attendees into the bar for happy hour. The event page promises a better time than the 2016 election.

Indivisible BK, Central Brooklyn Independent Democrats and other organizations are hosting an Election Returns party at The Bell House in Gowanus. Doors open at 7:30pm and tickets are $10.

Sister District is hosting an Election Watch Party at Fitzgerald’s Pub in Manhattan. It’s free to attend and they’re encouraging everyone to bring friends and family along for the long night of cheering on progressive candidates.

Pete’s Candy Store will be hosting a free Election Night Party in Williamsburg. They promise good times, tons of collective energy and some drink specials for attendees who need a cold one to help wash down their anxieties.

Clinton Hall Williamsburg (and its 4 other locations) will change its name to “Unofficial Town Hall” for the evening.  Show your I Voted sticker at their FiDi, Midtown East, W. 36th Street, Williamsburg or Bronx locations and score specials including $3 shots, $5 Gigawatt IPAs and a Double Smashed (Burger) for $10 while watching the results on the big screens.