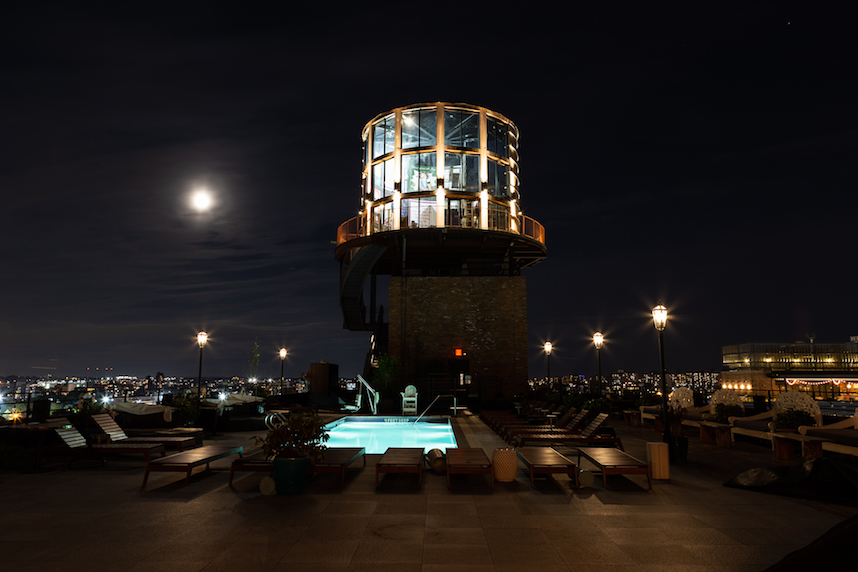 Since the opening of the Wythe Hotel in 2012, Brooklyn has been building up its hotel game to rival some of Manhattan’s finest. But here in our borough, these high-end accommodations really feel like vacation spots. Here, we can promise breathtaking waterfront views and fresh, open air—a major respite from the endless rush of the city.

The only challenge is figuring out which Brooklyn hotel to choose. So, we’ve put together a list of our favorite lodging options with destination-worthy amenities. With rooftop pools and great standalone restaurants that draw locals and out-of-towners alike, these top Brooklyn hotels feel like a treat whether you’re seeing the city for the first time or planning a high-roller staycation.

Just a word to the wise: Given that most of these hotels are in Williamsburg, the looming L-Train shutdown* in April 2019 and the many weekends of suspended service between now and then means you’ll likely need a rideshare or taxi to get to and from each. 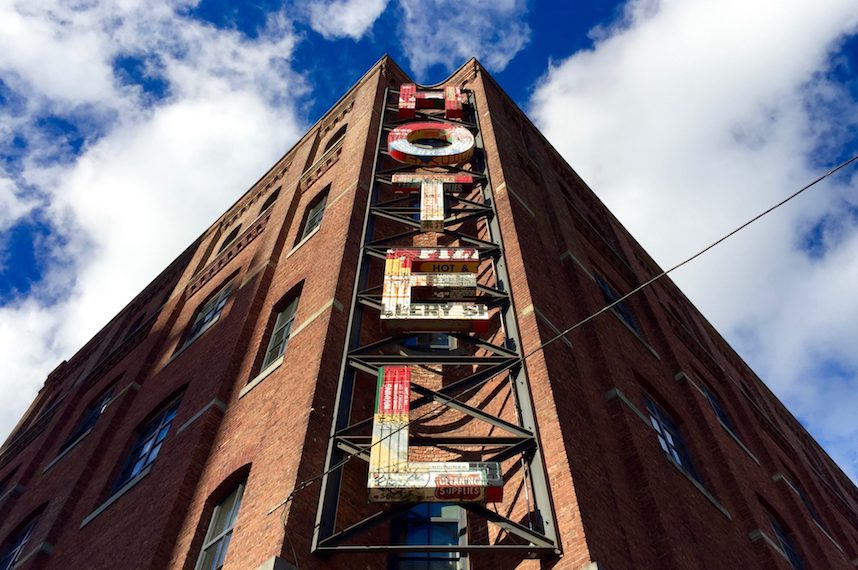 The Wythe is the OG of the high-end Williamsburg hotel scene. Photo: Kara Zuaro

What we love about it: The iconic Wythe Hotel, a 117-year-old factory converted into a 70-room hotel, started the whole high-end Brooklyn boutique hotel trend. This one set the tone for the others with its King Kong skyline views from many rooms, 13-foot ceilings, industrial-chic radiant heat concrete floors, and original works by local artists everywhere you look. And with 2-person maximum occupancy in every room, this is the perfect place to escape the Brooklyn baby boom. (Seriously, leave the kids at home or hit up one of the other options.) There’s no pool here, but if you’re at the Wythe, chances are you’d rather be eating than swimming.

Eats and drinks: Reynard is a neighborhood go-to as well as the Wythe Hotel’s in-house restaurant. Fittingly, they serve a particularly Williamsburgy brand of comfort food. Go for sourdough pancakes with apple butter for brunch, roasted fairytale eggplant on flatbread as a café snack, and roasted chicken with whipped pumpkin for dinner. And the kitchen’s own healing bone broth is available at any time of day. Make the Wythe’s rooftop bar, the Ides, your first cocktail stop of the night to sample the Dizzy World, a gin and tonic float with house-made sorbet, which is only available until 10pm.

Rates: Starting room rates for each room is $250. Online we priced a relatively unpopular night in December (the 23rd), and the pricing began closer to $265 for bunk room and $365 for a Manhattan View King. 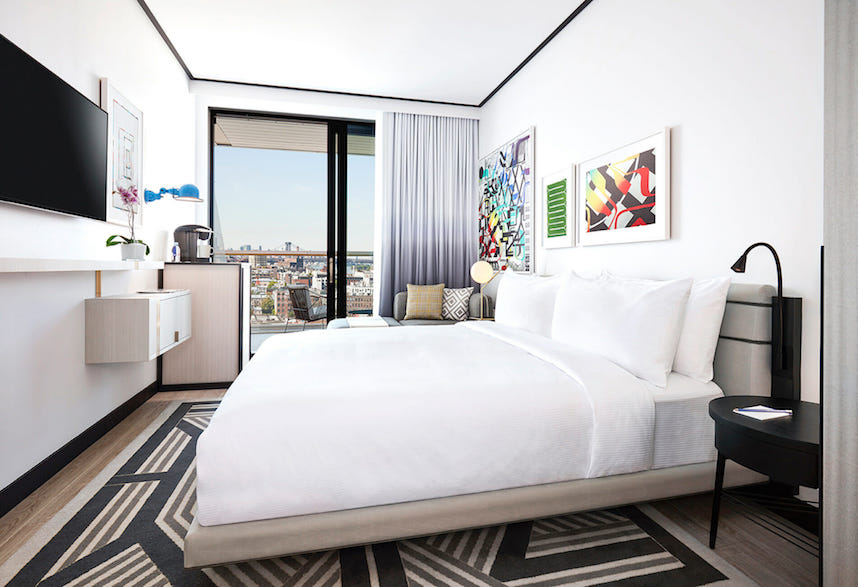 What we love about it: Everybody gets a balcony in this staggering 183-room hotel, which dramatically changed the Williamsburg skyline when it opened in 2016. Guests love the 60-foot pool, which has day pass and membership options for locals as well. Locals and out-of-towners alike light up as they discover Vale Park, a 15,00 square-foot elevated public garden and green space, located just a flight of stairs up from the sidewalk. The William Vale also invites both neighbors and guests to their quirky in-house events. The current calendar promises a drink-and-draw night, a soulful sound bath, and a vinyasa yoga class that involves a “mindful” wine tasting.

Eats and Drinks: You could savor a spendy black truffle pizza or just grab some “dirty dipped” cheesy waffle fries without leaving the hotel. For the pizza, head to the upscale (yet somewhat child-friendly) Leuca, serving Chef Andrew Carmellini’s Italian-leaning fare. For the fries, visit Mister Dips, an ice cream and burger joint run seasonally out of an Airstream trailer in Vale Park. (Worth noting: Mister Dips is currently closed for the season but will reopen in the spring.) In the meantime, you can soak up your hangover at Du’s Donut’s, Chef Wylie Dufresne’s coffee shop located under Vale Park. The roasty-toasty, espresso-laced coffee cake donut is a must-try. And for signature cocktails and crazy sunset views, swing by Westlight, the hotel’s 22nd-floor bar.

Rates: Rooms here generally start at $345 plus taxes. When we checked online for a night in December (the 23rd), we found the starting rates from their smallest to largest options ranged from $254 to $977, plus taxes. They also run frequent offers, like a standing 15% off for NY residents who want to staycation at the hotel. 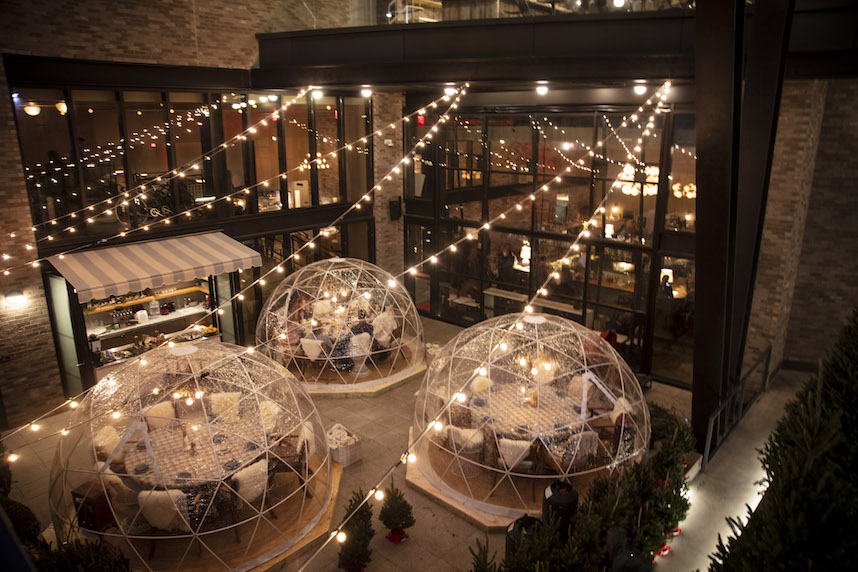 You can dine or drink in one of The Hoxton’s heated, outdoor winter domes this season, like you’re in a snow globe. Photo: The Hoxton 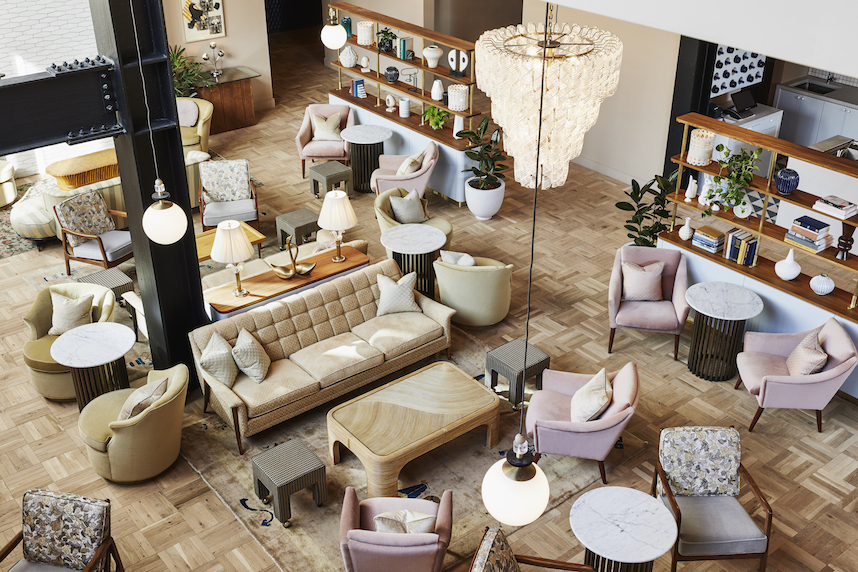 The lobby of The Hoxton is perfect for co-working by day and cocktailing at night. Photo: The Hoxton

What we love about it: The high-design British hotel brand The Hoxton chose Williamsburg as the locale for its first stateside hotel, and it is decidedly more subdued (and less bridge-and-tunnel) than its hard-partying neighbors. There are many inviting and intimate spaces throughout, like an upstairs lounge and a private event space called “The Apartment,” but the crowd they’re culling is more chill, and the events they host, like guided meditation circles and rum tastings, are not going to inspire the same line-around-the-block/hour-wait-for-the-rooftop madness that other Williamsburg hotels are known for. This is good, because the rooms are tiny, and you’ll likely want to spend a lot of your time here enjoying the common areas beyond it.

Eats and Drinks: There are a few choices here for daytime and nighttime dining, all helmed by the proprietors of Union Pool and Five Leaves, Brooklyn institutions that have lasting, unpretentious appeal. Throughout the morning and afternoon, the lobby doubles as a cool co-working space, with a coffee bar that transitions to a cocktail bar by the evening. For a proper meal, you could sit around the Molteni cooktop that features an open, wood-burning hearth—one of just a handful in New York City — or sit in the more formal section of the ground-floor, Americana-inspired restaurant, Klein’s. Come spring, the patio hangout Backyard will open, along with the breathtaking rooftop bar and restaurant Summerly, with English garden party-Hamptons vibes. Prices for cocktails here and at Klein’s ($14) feel standard, and not exorbitant for a Williamsburg waterfront hotel.

Holiday extra: Starting Dec. 1 you can book one of three glass “Domes” in the courtyard of the hotel on Resy for lunch, cocktails, dinner and $1 cups of cocoa, the proceeds of which will benefit the Coalition for the Homeless. (Entire domes can be booked starting Dec. 10.) Each has room for up to 8 with cozy features like fur throws and will be surrounded by 50 Christmas trees from Williamsburg staple, Crest Hardware.

Rates: Rooms all include thoughtful touches like a selection of books handpicked by neighborhood “curators,” which might include everything from a dog-eared copy of Brave New World to 100 Secrets of the Art World. Each has a king bed outfitted in quirky bedding by Brooklyn designer Deusen Deusen, but there is little room beyond your sleep surface. This is fine, as it keeps prices down. Rooms range from $159-$209 for a Cosy room and go up to $269-$549 for a Roomy room, which has more floor space.—Nicole Davis 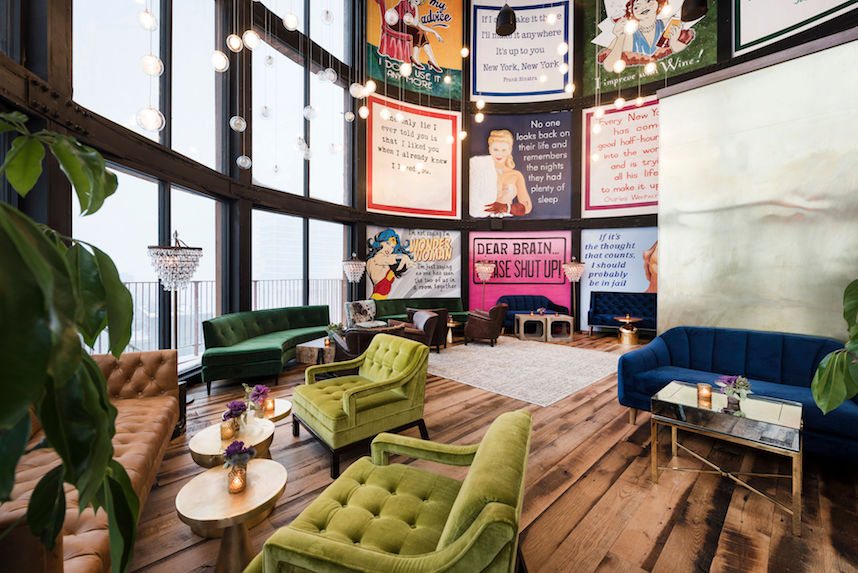 What we love about it: On a recent sunny Saturday, we watched a stream of guests leaving the hotel, each with a little dog (or two!)—and each canine cuter than the last. They all seemed to be headed toward the East River State Park dog run, located just a block away at 90 Kent Avenue. The Williamsburg Hotel’s well-appointment rooms sleep two humans at a time, but their connecting king and queen rooms welcome families and larger groups. Plus, they’ve got bikes available and a rooftop pool for guests who want as much fresh air as possible.

Eats and Drinks: The Williamsburg Hotel’s restaurant is known for serving Brooklyn’s only high tea service on the weekends, in addition to a vegetable-forward (though not strictly vegetarian) menu throughout the week. Guests might enjoy a lighter meal of spaghetti squash cacio and pepe with a perfectly poached egg—or go heavy with a Wagyu beef burger, piled with onion and bacon jam, fontina, and guanciale, plus a side of BBQ fries.) If you’re booking ahead, make sure to reserve a night for cocktails (starting at $22) at the Water Tower, its brand-new rooftop bar and lounge (that looks as it sounds). RSVP at watertower@thewilliamsburghotel.com. 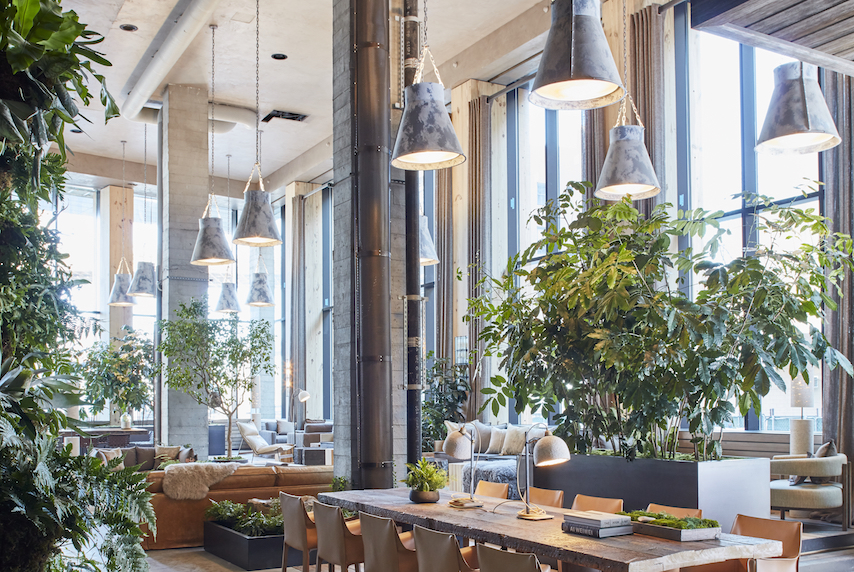 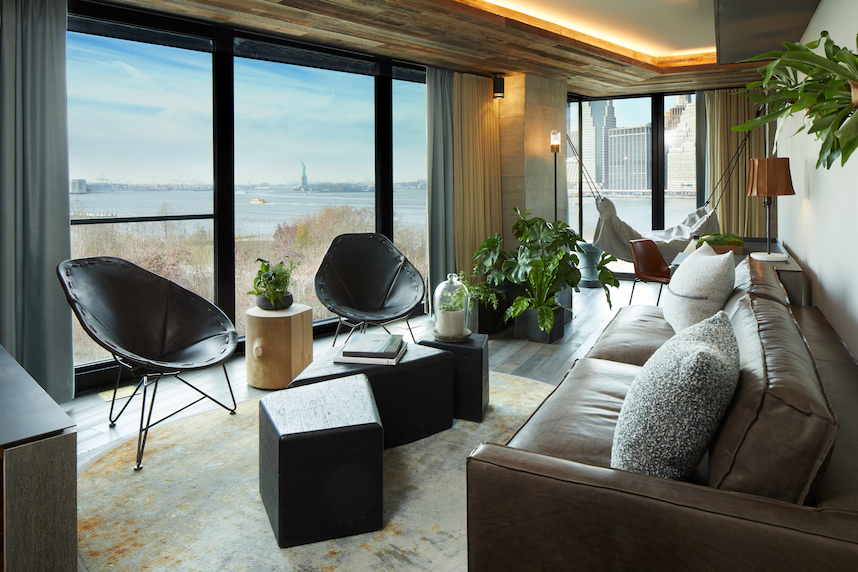 What we love about it: Hands down, 1 Hotel Brooklyn Bridge is the most expensive hotel in the borough. It is also the most beautiful and sustainably minded, with eco-luxe features baked into every aspect of this hotel that overlooks Brooklyn Bridge Park and the East River. A massive living wall greets guests in the lobby; a local designer repurposed beams from the Domino Sugar Factory into its cocktail tables; organic cotton sheets are fitted upon hemp-blend mattresses; even the key cards are made of recycled wood. The views of the skyline and Lady Liberty are as breathtaking as you’d imagine from this perch on the waterfront, and like nearly every other high-end hotel these days, dogs and cats are welcome. (You can even hang with your pooch in the lobby.) During the summer there is an outdoor infinity pool, and a full-service spa year-round. The sustainable vibe extends to their complimentary snacks: there’s a “farm stand” for complimentary fresh seasonal fruit and hot cider in the evening.

Eats and Drinks: The rooftop bar, which is closed for the winter, is special occasion-worthy even when you’re not a guest, though you do have to pay $20 for the privilege of the views. Its Brooklyn Heights Social Club on the 10th floor is a swanky alternative, and The Osprey is a date night dining option, with delicious, solid farm-to-table fare like smoked whitefish pâté ($13), shaved Brussels Ceasar ($16), a Berkshire pork chop ($31), and inventive cocktails ($15) garnished to the hilt. For simple breakfast and snacks, there’s The Neighbors Café.

The Rates: The starting room rate for its high season, now through end of year is $550. However, when we checked for one night in December (Dec. 23) the smallest room, but still relatively roomy, 300-square-feet Dumbo King, was $298, and one of the biggest suites, the Neighboring Skyline Suite adjoining a room with two queen beds was $1374. If your jaw has dropped, there are frequent, room rate discounts, like the current Winter Solstice special, which takes 30% off your room and adds a donation to Housing Works in your name.—N.D. 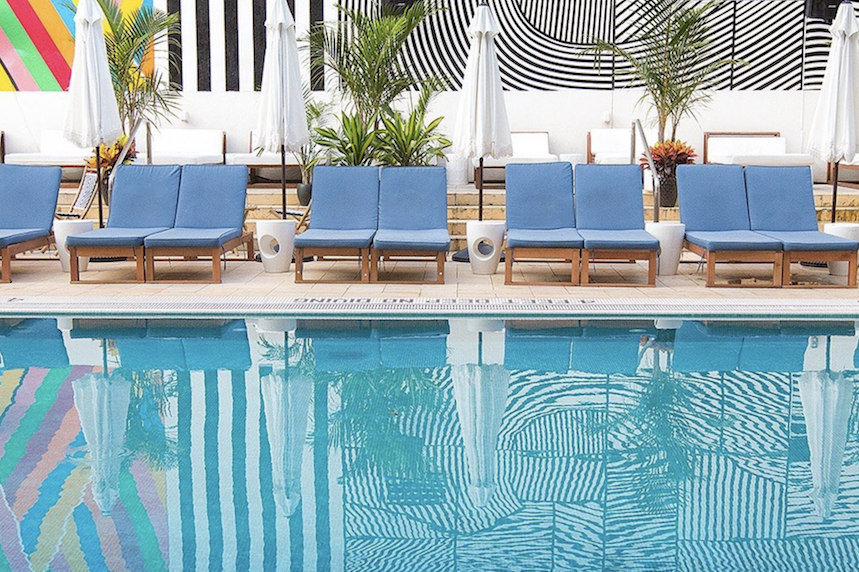 The McCarren Hotel Pool, the first in Williamsburg, is still a local favorite for summer dips and day passes. Photo: McCarren Hotel

What we love about it: With its heated outdoor swimming pool, located on a colorful 4,800 square-foot roof deck, the McCarren Hotel is a summertime oasis. (And the day passes here are more affordable than the neighboring hotels, making McCarren a favorite for locals, too.) But whenever you’re visiting, this is one of the neighborhood’s more family-friendly options, offering some rooms with two double beds and plenty of room for kids to run around at McCarren Park, located just across the street. They also welcome pets that weigh under 25 pounds and are just steps from the McCarren Park Dog Run (North 12th Street, Driggs Avenue and Union Avenue).

Eats and Drinks: The open-air rooftop bar is open year-round, with a cover for winter months. The subterranean restaurant has been home to several tenants but the space is currently closed.