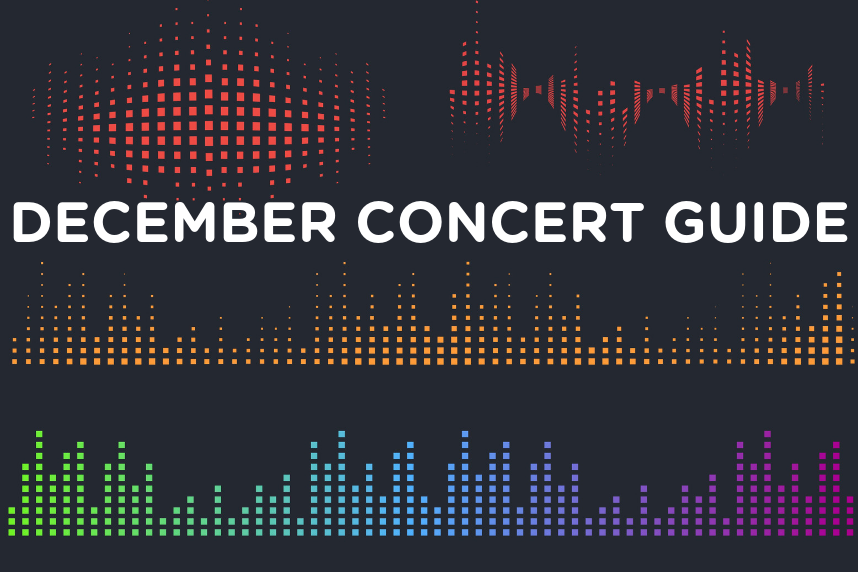 If you think the only live music to look forward to in December is the usual carol singing and holiday classical pieces, think again: there are plenty of other local concerts this month that don’t involve a jolly fat man, sugar plum fairies, sleigh rides, or the Rockettes. Among the many non-holiday shows taking place in the city include ones by Cat Power, Margo Price, the Lone Bellow, Phish, Billy Joel, an all-Prince music party, and jazz legend Kenny Barron. Here are some other acts whose shows will get you in the festive spirit, (mostly) without the holiday bells and whistles.

Lindsey Buckingham‘s name will always be synonymous with the key role he played in transforming Fleetwood Mac from a blues band to a multiplatinum pop music juggernaut (“Go Your Own Way,” “Monday Morning,” “Second Hand News,” and “Tusk” are just some of the many memorable songs he wrote for the Mac). Though no longer with the band, Buckingham isn’t exactly resting on his laurels—he’s also carved a rather idiosyncratic and adventurous solo career. Buckingham will continue on that path when it visits Town Hall on December 4 in support of his Solo Anthology collection. Expect some great tunes, soaring guitar playing, and a few Mac faves at this gig.

Unless you are a very sophisticated music fan, you may not know who ESG is. But there’s a chance you may have actually heard of them through other people’s songs. The group is best known for its 1981 track, “UFO,” one of the most popularly sampled songs ever, used by artists from Public Enemy to Nine Inch Nails. Formed in 1978 in the South Bronx, ESG consists of the Scroggins sisters—Renee, Valerie, Deborah and Marie—all of whom play instruments and sing. ESG’s music is not only funky and danceable but also minimalist and experimental. Having been around on and off, ESG returns to its hometown for a 40th-anniversary show at Elsewhere on December 5. It’s not going to be a concert but rather a dance party.

A true mark of Liz Phair’s greatness is her influence on a new generation of young female indie artists who have perfected their own version of bedroom pop. One of those acts is Sophie Allison, who goes by the moniker of Soccer Mommy. Earlier this year, Soccer Mommy released her debut album Clean, a stark and spare work that showcase Allison’s plaintive voice and meditations on matters of the heart; her style is both quite intimate and affecting. She returns back to the Big Apple to headline two nights on December 5 (sold out) and December 6 at Music Hall of Williamsburg.

Marissa Nadler‘s songs could form the perfect soundtrack for a film by David Lynch or any other auteur with a unsettling, noir-ish vision. It is because the music by the singer-songwrter, who will be playing at Rough Trade NYC on December 6, is moody and cinematic while also rooted in both darkness and beauty (if you never heard of Nadler’s sound before, it’s like dream pop and Americana music blended together). That is certainly the case with Nadler’s recently-released album, For My Crimes, which furthers her dreamy and melancholic explorations into the human condition thanks to tracks such as the title song, All Out of Catastrophes,” “Lover Release Me,” and my favorite “I Can’t Listen to Gene Clark Anymore.” Her haunting voice remains stunning as always, and it doesn’t hurt that she’s accompanied by Sharon Van Etten and Angel Olsen on a few of the album’s songs.

Since winning the Grammy for Best New Artist in 2011, the jazz bassist and singer Esperanza Spalding has embarked on a somewhat unconventional career path. Last year, she released an album, Exposure, which was born during a 77-hour marathon session in the studio and broadcasted live on Facebook, resulting in a limited-edition album Exposure. Her new jazzy and experimental record, 12 Little Spells, is no less ambitious: each of its 12 tracks corresponds to a particular body part; for instance “Thang” and “Readying to Rise” refers to hips and the legs, respectively. Bringing her new music to Town Hall on December 12, Spalding is keeping somewhat mum on what to expect, as she said on her website: “You’ll have to wait ’til we’re in the sound and space together…and just feel it.”

In 1987, it was hard to avoid hearing Los Lobos‘ cover of the Ritchie Valens’ song “La Bamba,” from the movie of the same name. The song was a smash hit all over radio and elevated the profile of the then-relatively unknown East Los Angeles rock band. Outside of “La Bamba,” however, Los Lobos has amassed a very impressive body of work marked by explorations in Latin rock, alt-country, R&B, and even Disney songs. The group will be at City Winery from December 15 to 17 performing both acoustic and electric music from its rich and rootsy catalog.

New York fans of the Minnesota-based public radio variety program Live From Here With Chris Thile (formerly A Prairie Home Companion) will get to experience the show in person without having to travel to St. Paul. That’s because Live From Here will be at Town Hall for four Saturday performances throughout December. On the 15th of that month, Thile, the singe, mandolinist and founding member of Nickel Creek, will have as his special guests St. Vincent, who recently released MassEducation, a stripped-down version of her 2017 record Masseduction; and the Louisiana-born pianist Jon Batiste, the band leader for The Late Show With Stephen Colbert, who also has a new record out, Hollywood Africans.

Finally, since this is the holiday season, it is a given that the major concert halls will be populated by choirs and orchestras performing the usual Christmas fare from Bach, Handel, and Tchaikovsky. But if you want some holiday music with a little more swing and pep, why not try some big band jazz led by the iconic Wynton Marsalis? Featuring the trumpeter and the Jazz at Lincoln Center Orchestra, Big Band Holidays has become an annual popular celebration of sacred and secular music. This year’s installment from December 19 to 23 will feature two emerging jazz singers: South Africa’s Vuyo Sotashe and New York-based Veronica Swift.