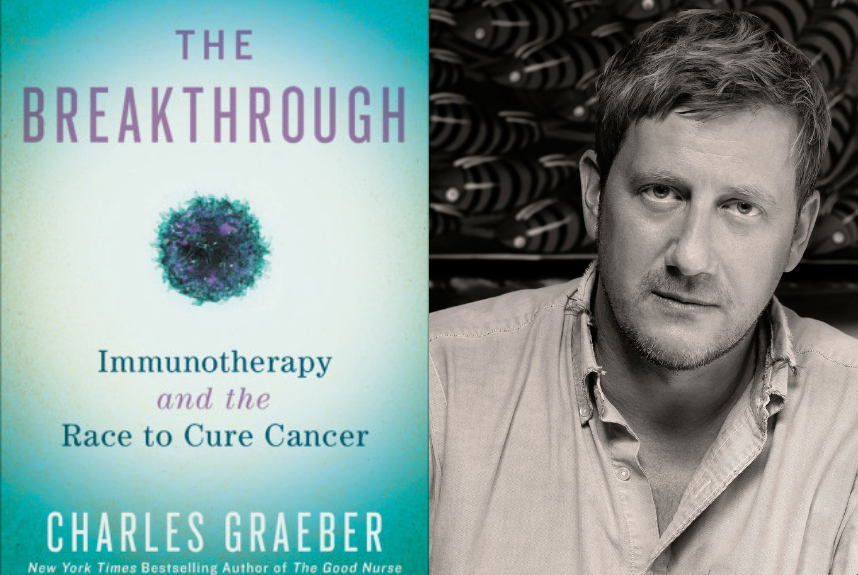 Charles Graeber’s first book, The Good Nurse (Twelve, April 2013), was a hauntingly intimate portrait of the serial killer Charlie Cullen, known as the Angel of Death. Told in a spare, Carver-esque style, alive with morbid detail, the story was propulsively readable—a fact easy to attribute to the subject rather than the writer himself. The Breakthrough (Twelve, November 2018), Graeber’s newest offering, details a watershed moment in cancer research—a decidedly less hair-raising story.

On the surface, these two books are polar opposites: the first is about someone with no regard for human life; the second about a group of people dedicated to prolonging it. What the two books share in common is Graeber’s rare ability to lend real-life stories a sense of urgency and importance that keeps you turning pages to see what happens next.

The Breakthrough’s subject is the emergence of a new generation of immunotherapeutic cancer treatments that have gone largely unreported until now, despite the fact that the winners of this year’s Nobel Prize for Medicine were immunotherapy researchers. But with an origin story set largely in white coat labs and oncology offices, it’s not necessarily the stuff of great nonfiction. And in another writer’s hands, the book could have read like a gussied-up white paper. Instead, The Breakthrough is chockablock with memorable character studies and fascinating historical anecdotes that buoy the reader when the science itself threatens to drag you under.

Graeber, a bestselling Brooklyn author and seasoned reporter who is clearly committed not just to getting this story out, but also to getting it right, spends the introduction carefully explaining the importance of this new approach to cancer and the science behind it, leaning heavily on analogies that make it accessible to those of us without PhDs. These developments, which began with the discovery of “checkpoint inhibitors” that work to slow or even block the replication of cancer cells, mark the dawning of a new era in cancer treatment, Graeber explains.

These discoveries validated an approach to beating cancer that is conceptually different from the traditional options . . . an approach that treats the patient rather than the disease. For the first time in our age-old war with cancer, we understood what we were fighting, how cancer was cheating in that fight, and how we might finally win.

But Graeber seems to intuitively sense when he’s in danger of losing the reader’s attention with one too many acronyms, and with the basic facts laid out plain, he quickly moves on. In Chapter 1, we meet Jeff Schwartz, Patient 101006 JDS. Schwartz is a Queens-born accountant who made a good living for himself managing money for big-time music acts, like the Lumineers and Imagine Dragons, right up until 2011 when he was diagnosed with Stage 4 kidney cancer. His was a specifically virulent strain known as sarcomatoid renal cell carcinoma that Graeber describes as ”inscrutable, incurable, and complicated.” But Schwartz had a strong will—not to mention a wife and two small kids—so he lets a surgeon go in and cut out big tumor-riddled chunks of his spine anyway and replace them with “titanium infrastructure.” Even this doesn’t do much to slow the progress, however, and soon the surgeon is urging him to give up treatment altogether. And the surgeon would likely have been right if a series of happy accidents hadn’t led Schwartz to cross paths with Dr. Dan Chen, the oncologist leading up Genentech’s immunotherapy development team.

Chen was just launching an experimental drug trial. Conventional cancer treatments essentially come in three flavors, Graeber explains: “cut, burn, or poison”—a blunt force approach that frequently fails, and results in a lot of collateral damage even when it doesn’t. Chen wanted something better; he was looking to harness the power of the immune system to fight the body’s rogue cancer cells. He believed that immunotherapy had the potential to be the targeted missile to conventional cancer treatment’s atom bomb. This put him on the fringes of his field. Immunotherapy had fallen out of favor years before for a variety of reasons that Graeber elegantly unravels. This didn’t bode all that well for Jeff Schwartz, but then again, he didn’t have many choices left.

Schwartz turned out to be Dan Chen’s “first responder” and his response was almost immediate. Prior to the trial, he’d been plagued by fatigue and pain so debilitating he couldn’t go to work or pick up his kids. Within weeks of starting treatment, he was taking his five-year-old to SeaWorld. He had been “recalled to life,” all thanks to this approach Chen was championing—an approach that the majority of his peers still jeered at.

Chen’s was one of a series of breakthroughs in the field of immunotherapy to occur at breakneck speed in the span of about a decade. And it is this discovery process that makes up the meat of The Breakthrough. To provide some perspective on the pace of progress, Graeber mentions that Siddhartha Mukherjee’s Pulitzer-prize winning book on cancer, Emperor of Maladies, makes no mention of immunotherapy. It was published in 2010; the first of the new generation immunotherapeutic cancer drugs was approved by the FDA five months after its publication. As of June 2018, less than ten years later, Graeber reports that there are more than 2000 new immuno-oncology drugs in various stages of research and development. Some see these treatments as on par with the discovery of penicillin in terms of their potential impact on human life. Jim Allison, an immunotherapy researcher and one of Graeber’s key subjects, was one of two immunotherapy researchers awarded 2018’s Nobel Prize for Medicine. This happened just weeks before The Breakthrough’s publication.

How could an area of cancer research with such promise have gone ignored for so long? Graeber uses a combination of meticulous research, lucid explanation, and Erik Larson-style storytelling to unpack the mystery for us. I particularly enjoyed Chapter Two: A Simple Idea, which recounts the early days of discovery, and includes descriptions of a number of grisly, off-the-books experiments—one involving the injection of a carefully cultivated bacterial toxin directly into a man’s bulging neck tumor.

The Breatkthrough is the rare medical book that’s also a thrilling read. But it offers more than just information and excitement. After 2018’s endless onslaught of headlines about white nationalism and climate change and separated families, many of us are finding it hard to maintain our faith in human nature. Graeber’s new book spotlights the best of us—the researchers and clinicians who spend years in back rooms, logging data, palpating mice and weathering failure after failure, in their struggle to find something that makes a real difference to patients. Not all of them succeed, and Graeber is quick to remind us that immunotherapy is still in its infancy. But it worked for Jeff Schwartz and a whole lot of others and that offers us something in short supply these days: hope.