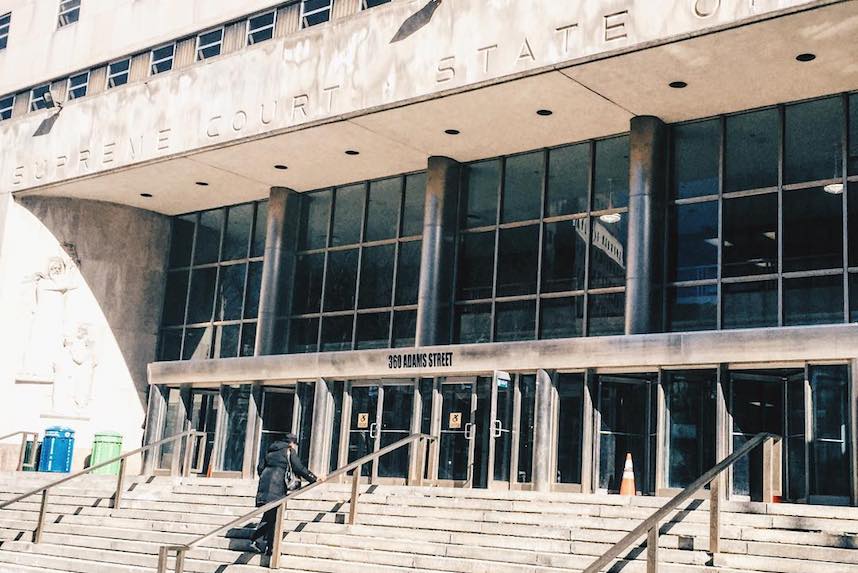 Note: This is a culinary update to our very practical guide to fulfilling (or shirking) your civic duties as a juror in Brooklyn, “Surviving Kings County jury duty,” Originally published in 2012, it remains one of our most popular stories for good reason.

Once upon a time, not long ago, the lunchtime options around downtown Brooklyn’s greater Jay Street/MetroTech metroplex leaned more toward the pedestrian, if not completely banal. This meant that those drawn for jury duty in Kings County could look forward to grabbing a lunch from an Au Bon Pain, a Subway shop or two, or a pay-by-the-pound Chinese buffet. Such a panoply of delights was more befitting of a suburban office park than an urban expanse adjacent to a federal court (currently hosting the El Chapo hearings) and a branch of the busiest criminal municipal court docket in the country.

The general area has had its share of standbys and solid newcomers, mind. Anyone who has been to Yemen Café, for example, knows that once they’ve had the falling-off-the-bone roast haneeth, their perception lamb will forever be changed. And the original Brooklyn Coffee Roasters in Dumbo elevates its signature hot drink into an experience. There’s a bit of a problem though: jurors have a lunch break of exactly one hour. That doesn’t leave a whole lot of time for going in and out of the court system’s near-TSA-level security, never mind venturing further than a few short blocks.

Suffice it to say, MetroTech has come into its culinary own. Longtime Brooklyn Based readers may recall my food review-cum-memoir of my four-week tour of duty on a Kings County grand jury in October 2011. By and large, the procedure and protocol remain the same. It’s well-nigh impossible to get out of a grand jury unless you’re about to give birth or just gave birth. The jury’s still out—sorry—on whether or not giving birth during jury selection is a sufficient excuse. Being a full-time student isn’t enough to get out of jury duty, though you can postpone until you’re done with your academic term. Being registered to vote at your childhood home in North Carolina or Westchester County despite having lived in Brooklyn the past decade or so (shame on you) might prevent your name from getting drawn from the Board of Election rolls, though claiming benefits such as unemployment insurance from your Brooklyn address will enlist you into the trusty jurors’ ranks.

True story: My husband, who despite having met our neighborhood punk rocker-turned-city councilman multiple times and my being on the same running team as our new state senator, still hasn’t changed his voter registration from his home suburb in Morris County, New Jersey, and got called for jury duty last year after having filed for UI from our home in Bay Ridge. Fortunately, his coding class had saved him—for the time being. Now that my eight-year term of jury duty respite comes to a close this fall, I too am staring down the specter of another month of lunching around MetroTech. At least when our turn comes back up to serve, we’ll have better eats. If I didn’t thus share these gems with you, well…shame on me.

Back in 2011, the Korilla BBQ food truck was a mobile object of food critic praise for its SoCal-esque approach to Korean/Mexican fusion cuisine, winning the Vendy Award as Rookie of the Year. A few years later, after garnering acclaim for its burritos and bowls bursting with bulgogi, ginger chicken, gochujang pork, and organic tofu, Korilla would open its first brick-and-mortar location on St. Marks Place in the East Village. Comme les temps changent. That location has since shuttered and is on its way to become yet another office building. Brooklyn has seen a gain, however: this February, Korilla’s first Brooklyn outpost, located at 2 MetroTech, celebrates its first birthday. In addition to serving its beloved truck fare, the Brooklyn brick-and-mortar location offers a wider selection of bowls and of kimchi. The restaurant holds a 10-year lease on the space, so hopefully it won’t be rolling away anytime soon. Korilla BBQ, 2 MetroTech Center

Yaso Tangbao made a name for itself in 2015 in downtown Brooklyn with its assortment of Shanghainese street food and continues to mean business with its well-edited, no-nonsense menu. China’s largest city biggest contribution might be soup dumplings and Yaso Tangbao takes no prisoner on this front, including four types of xiao long bao in its lineup: its original Yaso pork, spicy pork, chicken, and pork with crab. Those who prefer their soup in bowl form can slurp away their sorrows with one of Yaso Tangbao’s noodle bowls, topped with a selection of proteins including pork meatballs, spicy diced chicken, and braised beef. Vegetarian or vegan? Tuck into braised tofu or a spicy cucumber salad, or the soy garlic with cilantro noodle bowl. (The tofu noodle bowl is made with chicken broth). Anyone in need of a pre-court—or a post-F or R train delay—perk-up can avail of Yaso Tangbao’s morning menu. Juicy buns stuffed with pork, vegetables, or curry chicken; sweet potato congee or an egg scallion pancake roll, which will make anyone who has ever visited Austin vaguely reminiscent of a breakfast taco; will all do your breakfast justice. Yaso Tangbao also has locations in Industry City and on 42nd Street in Midtown East. Yaso Tangbao, 148 Lawrence St.

In the intervening years from when I did jury duty, a Shake Shack has since emerged at the end of the Fulton Mall, across from Borough Hall. If the line looks sane, go forth and conquer. Shake Shack, 409 Fulton St.

Perelandra has served the community’s health food needs since 1976. But it wasn’t until a friend who had recently moved to downtown Brooklyn was I aware of its existence. Tucked away on Remsen between Court and Clinton Streets is a vegan and organ food lover’s paradise. More than a natural food store, Perelandra is home to a vegan, kosher kitchen and juice bar. Open daily from 8 am to 9 pm, the hot bar serves hearty breakfast options such as chickpea frittata and biscuits with mushroom gravy. For when you find yourself in an inevitable midday time bind, Perelandra also offers online ordering for pickup, with your spicy seitan banh mi, roasted eggplant pesto, or smoky pulled jackfruit sandwich waiting for you on your arrival. Perelandra Natural Foods, 175 Remsen St.

No coterie of urban office dwellers in the 2010s would be complete without a food hall. Similarly, no synopsis of quick lunch spots near Metrotech would be complete without a mention of DeKalb Market Hall. Located within City Point Shopping Center, within reasonable walking distance of the Kings County court system, its 35 vendors provide goods to slake cravings for all of its 7 am to 10 pm operating hours: Start the day on a sweet note with French pastries from Café d’Avignon, segue from breakfast into lunch with bagels and burgers from Andrew’s Roadside; and on the way home, wash the day away with a tipple from beer purveyor Cash & Carry or a frosé from Brooklyn Wine Cellar. Sample Lower East Side and Bensonhurst sandwich finery in one fell swoop, thanks to the DeKalb Market outposts of Katz’s Deli and Lioni’s. Save yourself a trip to Red Hook and sample Steve’s Authentic Key Lime Pies from the comfort of being near various subway lines, or head to Kotti Berliner and take advantage of the rare opportunity in the US to eat German-Turkish-style döner kebab (other chances being at their locations at Industry City and the Bryant Park winter market). DeKalb Market Hall, 445 Albee Square W.

See you at MetroTech sometime in the next eight years for jury duty. See you there next week for lunch.

Related:
How to survive Kings County Jury Duty
The best noodles and soup dumplings in DoBro