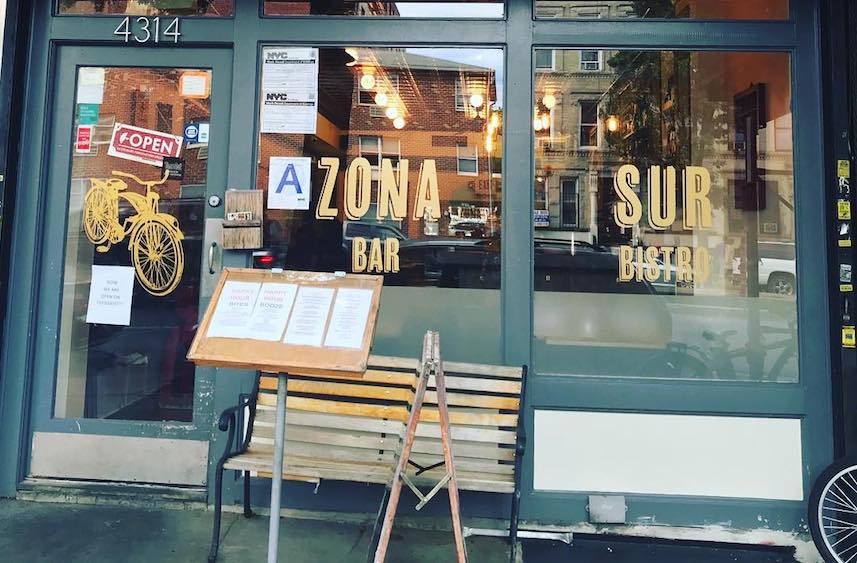 The food options around Industry City are endless. We picked six stellar choices inside the complex, and six within walking or car-service distance. Photo: Cafe Zona Sur

When I moved ten blocks south of Industry City four years ago, it was more or less an austere, lifeless monolith of stone during the weekend hours (and not exactly a hive of activity during the week either, tbh). Although there was lots of talk back then of what was coming down the pike, there was little action visible whenever a bike ride or a random errand brought me down to Third Avenue in the 30s. On a recent Saturday, however, when I was in Building 2 to do some holiday shopping at a pop-up makers’ market, my friends and I tried 5 different food stalls before leaving the compound for lunch because the lines were too long, and I ran into three people I know who were visiting from other parts of Brooklyn and Manhattan to experience the famed Food Hall in person.

I’m close enough that I have the luxury of being able to pop over often and during off-hours (read: no crowds) to try whatever delicacy I want, but even so there’s a lot that I haven’t managed to get to yet. Japan Village has a dozen vendors alone, I noticed this past weekend that a new Indian food counter called Taza Market has opened just in the last couple of weeks, and the available options will multiply exponentially when the long-awaited outposts of Hometown BBQ and Sahadi’s finally open their doors in the coming months. It can all feel a bit overwhelming, so I’ve highlighted some of the best places I’ve found so far in this mecca of diverse culinary choices just in case you find yourself feeling peckish the next time you’re picking up vacuum filters at Bed Bath & Beyond or strapping on your roller skates at the new Lola Dreamland Roller Rink. Bon appetit!

I’ve never really met a soup dumpling I didn’t like, so when Yaso Tangbao opened its standalone Industry City location on 34th Street, I was thrilled to have a source so close to home. The space is small and spare, but efficient, and the menu features an array of Shanghai street food delicacies, like dumplings, noodles, and some bonus special seafood dishes that aren’t available at Yaso Tangbao’s other locations. For my money though, there is no better way to reward myself after tangling with the unholy catastrophe that is Costco on a weekend afternoon than a plate of spicy pork soup dumplings and Brooklyn-made Bruce Cost ginger ale.  Industry City, 253 36th St., Brooklyn, NY, 11232

Right next to soup dumplings at the top of my most commonly craved foods list is that crispy, umami-bomb perfection known as Korean fried chicken, and Ejen’s clean, minimalist space is a nice place to escape the Food Hall fray and dig in to a generous serving. This rendition is shellacked with a glossy sauce that is distinctly wetter and messier than what you might find at Bonchon, so grab plenty of napkins and don’t order it solo, as the portion is huge and doesn’t translate very well to leftovers. Although I haven’t tried it yet, the bibimbap looks mind-blowing. Industry City Food Hall, 254 36th Street, Brooklyn, NY 11205

If a killer Italian sub is your Achilles heel, take things to the next level with The Hogfather sandwich at Ends Meat. Like all of the meat served at this whole-animal salumeria, the salami and pancetta involved comes from animals that are responsibly raised and pasture fed. You can balance out your elevated cholesterol and sodium intake with a variety of seasonal vegetable side dishes displayed in a glass case at the front of the store. Industry City Food Hall, 254 36th Street,
Brooklyn, NY 11232

Only @Table87_ is where you’ll find coal oven pizza by the slice 😍🍕 📸: @nycbrgrlvr 📍Visit one of our Brooklyn locations today and share your experience with us!

You can find Table 87’s thin crust Margherita pizza at its Brooklyn Heights and Gowanus outposts, as well as in the Whole Foods freezer aisle, but a hot-out-of-the-coal-oven slice of it is my go-to when I find myself with limited time to spare in Industry City. The line here seems to move faster than it does at the other Food Court vendors, and the pizza is reliably fresh and well-seasoned. Industry City Food Hall, 238 36th Street, Brooklyn, NY 11232

When Sunset Park residents lament the hipsterfication of the area occasioned by Industry City, Avocaderia is often named public enemy number one. Is it annoying that people consistently wait in interminable lines here to pay ~$10 for that insanely overhyped symbol of Millennialism, avocado toast? Sure, but this is one of the few places in the Food Court that feels vaguely healthy, and I didn’t regret the Mediterranean toast I tried there a few months back. I could technically make it at home, but I’m not going to hold my breath until the next time I have tapenade, sun dried tomatoes, and pistachio dukkah lying around. Industry City Food Hall, 238 36th Street, Brooklyn, NY 11232

Now that’s it’s been open for a couple of months, the crowds at Japan Village seem to have subsided a bit, and you’ll have a much better time exploring the tightly clustered food stalls there now that you would have in the weeks leading up to Christmas. Regardless, though, I still recommend arriving as close to the 11am opening hour as possible on a Saturday or Sunday, which is the perfect time to get a coffee and one of the custard pastries at Cafe Japon. I’ve found that the tuna mayo onigiri (stuffed rice balls) at Obentoyason or the okonomiyaki, a sort of savory egg pancake with pork and shrimp, at Hachi both stand in quite well for my usual Saturday brunch. Industry City, 934 3rd Ave, Brooklyn, NY 11232

If you’ve ever tried Kotti Berliner’s Turkish/German-style doner sandwiches at their City Point outpost, you know that this combo of tender roasted chicken paired with vegetables, tangy sauce, and pillowy pide bread is tough to beat. This is a great lunch option that will satisfy you without weighing you down, which is helpful if you’ve got an afternoon of flipping through the rug piles at the ABC Home & Carpet Outlet ahead of you. Industry City Food Hall, 220 36th Street, Brooklyn, NY 11232

If you’re looking to eat in Industry City around lunchtime on a weekend, you need to accept the reality that the crowds (and volume level) in the Food Court or Japan Village might make eating there a nonstarter. No need to despair, though, as you can walk just a few blocks south on Third Avenue to Gran Villa for a memorable meal of pupusas, platanos maduros, and horchata, all for a fraction of what you’d pay within the IC complex. 4002 3rd Ave., Brooklyn NY, 11232

Slimak is a charming, light-filled breakfast spot with good coffee, ample seating, and a variety of wholesome, vegetable-heavy brunch dishes and pastries to fill up on before braving the crowds just a few blocks away at Industry City. Last summer, I would often plan a weekend run to end nearby, so that I could enjoy a slice of quiche or the brown rice and spinach bowl with a poached egg and za’atar at the bar while perusing the cafe’s copy of the NYT Magazine. 4110 4th Avenue
Brooklyn, NY, 11232

Just two blocks further south, you’ll find Cafe Zona Sur, another spot worth visiting for a delicious, hearty breakfast. I’m not even a French toast person, but the rendition here is something special, and it’s one of the few places in the area that serves salads that are fresh and appetizing. 4314 4th Avenue
Brooklyn, NY, 11232 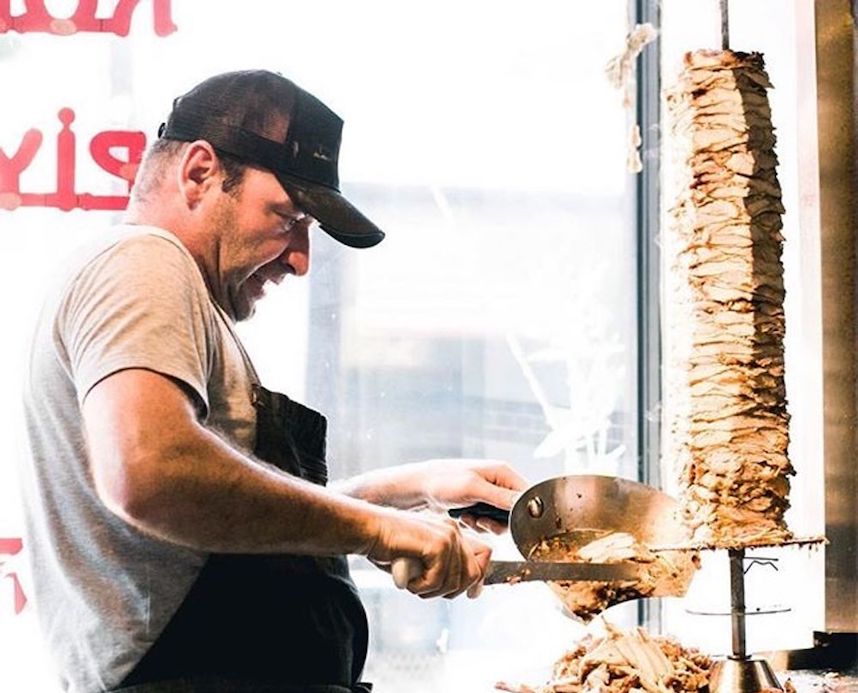 The friendly proprietor of Kofte Piyaz, a tiny Turkish joint up on 5th Ave and 39th Street, has earned quite a reputation in the neighborhood for his delicious meatballs, but the gyros and stuffed grape leaves won’t disappoint either. 881 5th Avenue, Brooklyn, NY 11232 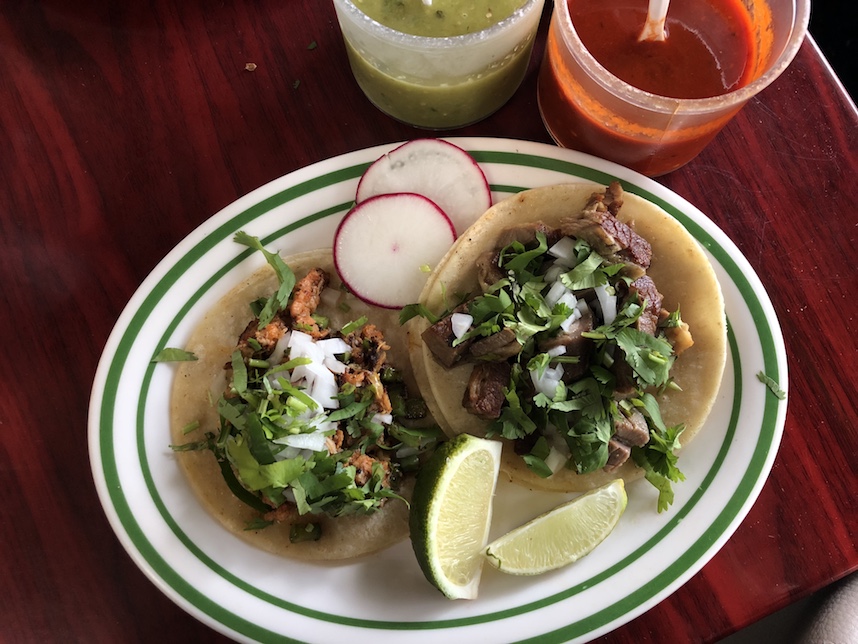 Sunset Park was a food destination in its own right long before the likes of Smorgasburg and CitiBike descended upon Industry City, namely due to a scattering of no-frills Mexican taquerias lining 4th and 5th Ave in the 40s and 50s and serving everything from pollo to pastor to chorizo to cabeza. This summer, cookbook author Lesley Téllez recommended some stellar taco spots that you should definitely check out if you’ve some time after you’ve finished up your business in Industry City. My personal favorite, Tacos El Bronco, didn’t make her list, but it never disappoints if an authentic, inexpensive meal is what I’m after. If you like, swing by Five Boroughs Brewery on 47th Street when you’re done to polish things off with a cold pint or two before catching the train home.