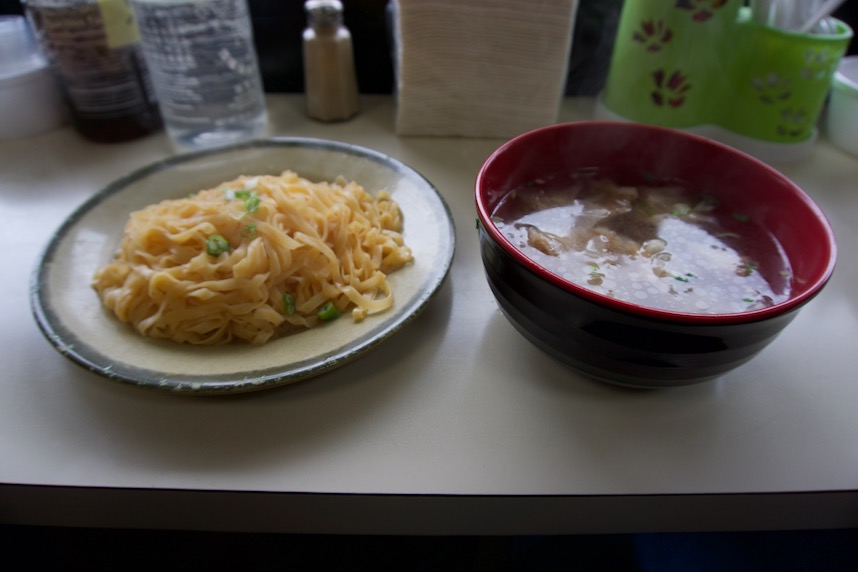 Stretching from 40th to 65th Streets on 8th Avenue in Sunset Park, Brooklyn’s Chinatown is one of the best neighborhoods in New York to experience two unique styles of Chinese cuisine–Fujianese xiao chi and Cantonese dim sum.

Dim sum, with its bite-sized dumplings and buns, are a Cantonese specialty most commonly found in large restaurants bustling with the sound of pouring tea and spirited chatter, all served from carts pushed by fast-paced Chinese women who expertly peddle their cart items like seasoned auctioneers. The Cantonese are Southern Chinese people from Guangdong province and the culinary masterminds behind Chinese American dishes like chop suey and egg foo young. Most urban American Chinatowns feature populations that are heavily Cantonese.

What makes Brooklyn’s Chinatown unique is its large Fujianese population. A sub-tropical province in Southern China, immigrants from Fujian first arrived in Brooklyn in the 1980s and in large numbers in the 2000s. Initially, most Fujianese settled in Manhattan Chinatown, before heading to Sunset Park where commercial rent and housing prices were lower. (Most Fujianese are economically poor; the majority of Chinese students in Sunset Park schools qualify for free lunches, and most adults work in restaurants and manual labor jobs.)

Because of these demographics, Brooklyn’s Chinatown has become a culinary destination for Southern Chinese cuisine, especially Fujianese xiao chi 小吃 (Little Snacks). Essentially, this covers anything that falls outside the Chinese definition of a full meal, in which rice is accompanied by several dishes of meat and vegetables. Comparable to Spanish tapas, xiao chi are small servings of dishes, most often noodles, dumplings and pastries meant to be eaten as snacks or a light lunch. This culinary category exists in every region of China. Cantonese dim sum, with its small servings of different dishes, is a type of xiao chi, although it’s considered more formal and often served in large restaurants with seafood-focused banquet dinners.

Here are five restaurants in Sunset Park to sample this cuisine. Since the prices are affordable and the serving sizes are similar to tapas, try as many dishes and places as possible for the true xiao chi experience. 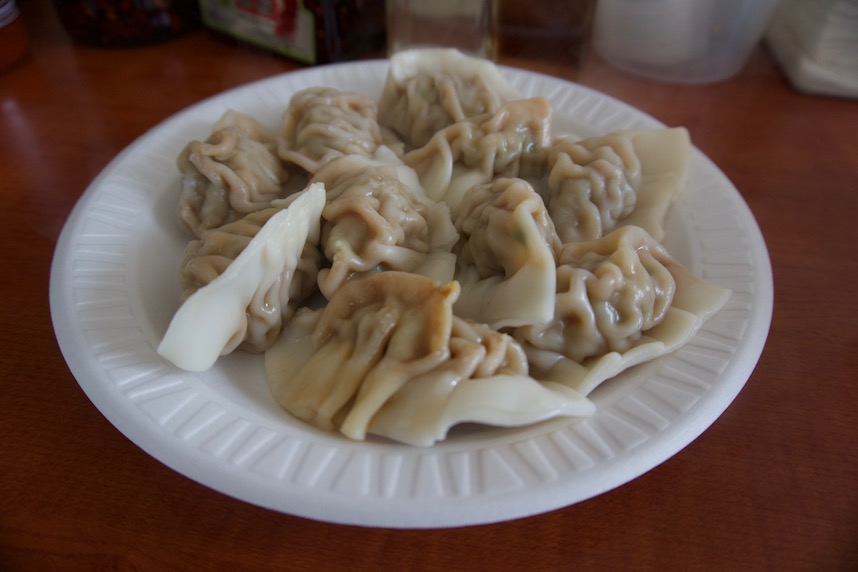 This small restaurant (also called Chen Min Café on its takeout menus) specializes in Fujianese noodle soups, wontons and dumplings. The menu contains English and posted on the wall are pictures of the various dishes, a useful tool for non-Chinese speaking customers. Restaurant seating is limited, only a few small plastic stools are available. In the center of the restaurant is a counter filled with ingredients: seaweed, pork meatballs, shellfish and vegetables. This is the noodle station. Customers can personalize their noodles by requesting different ingredients and toppings. For something uniquely Fujianese, try the Fuding Meat, a soup consisting of seaweed, cilantro and bite-sized pork dumplings. The meat has a bouncy texture like al dente noodles, common to Fujianese cuisine. To achieve this, minced pork is pulverized into a smooth paste, combined with sweet potato flour and formed into small dumplings before being cooked in hot broth. Noodle soups are $5-$7. Wontons and dumplings are $2.5-$4. 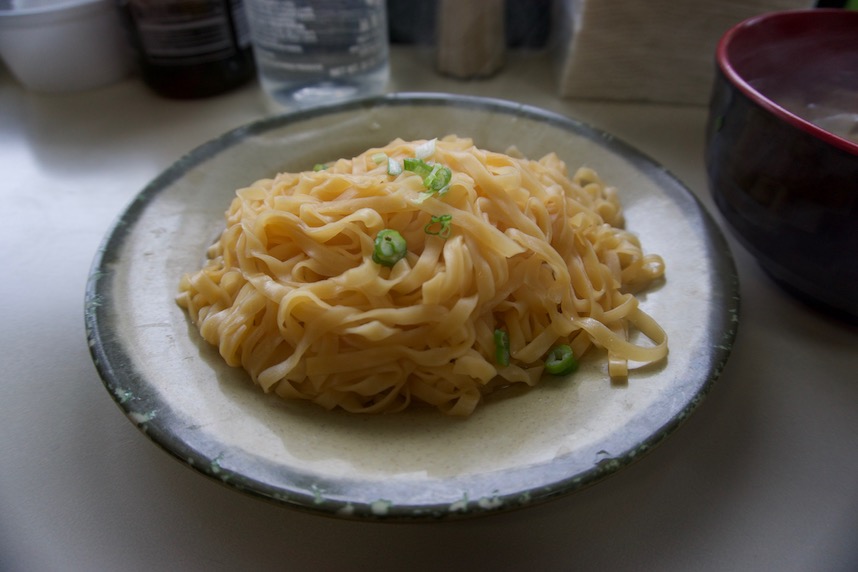 This popular restaurant is a family affair. When I visited on a weekday afternoon, a toddler of a restaurant worker was busy walking to every table in the small restaurant and greeting every customer like a tiny politician running for office. Most of the customers acknowledged the small human’s presence by patting him on the head, no doubt all regulars judging by the laugh and understanding look of the child’s mother standing in the kitchen door.

Besides the large selection of rice-based lunch specials, this restaurant also has Fujianese style wontons and peanut butter noodles. Known as ban mein, these chewy noodles are served with a savory peanut sauce. Since the sauce is located on the bottom of the noodles, diners should toss the noodles evenly before eating. Another popular item is bian rou wontons, translated as “flat meat.” Traditionally, some Fujianese wonton wrappers are made with a combination of pork mince pounded into a paste before being combined with wheat flour and rolled into paper-thin wrappers. The bian rou at Uncle Wang’s are made simply with extremely thin flour wrappers and served in a light broth. Rice plates are $5-$6. Noodles and wontons are $2-$3.5. 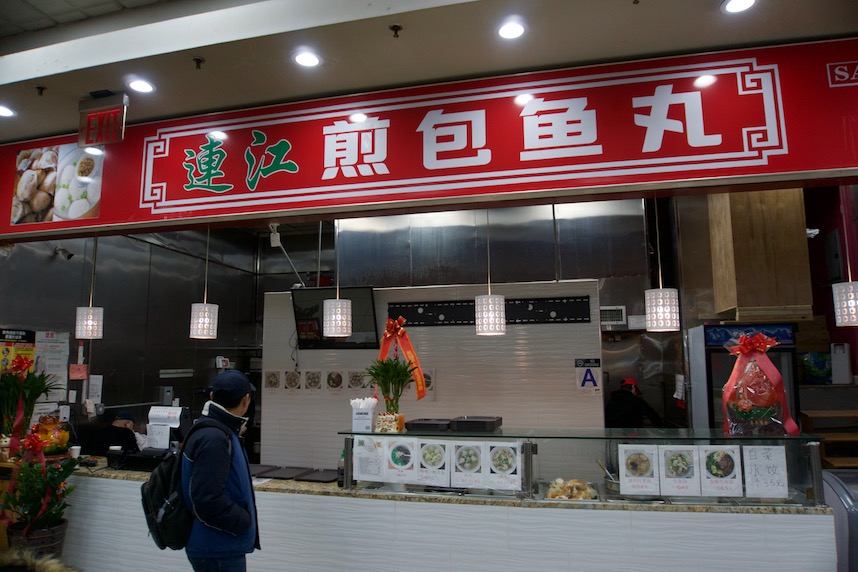 No visit to Brooklyn Chinatown would be complete without a trip to the Fei Long Shopping Center. A one-stop shop, this shopping center includes a supermarket, several shops selling clothes and beauty supplies, along with various bakeries and restaurants. Inside the supermarket is a food court where diners can enjoy Shanghai-style soup dumplings, Cantonese barbeque and San Qiang, a Fujianese xiao chi restaurant. Located towards the back of the food court, San Qiang serves specialties like fish balls stuffed with pork, fried buns and noodle soups. Due to Fujian being a coastal province, seafood is a staple of its cuisine. The fish balls here are smooth and springy, made from fish meat ground into a paste. Inside each fish ball is a pork filling laced with scallions—a Chinese surf and turf. The fried buns come four per order and are filled with the same pork mixture. Fish Balls are $3. Fried Buns are $2. 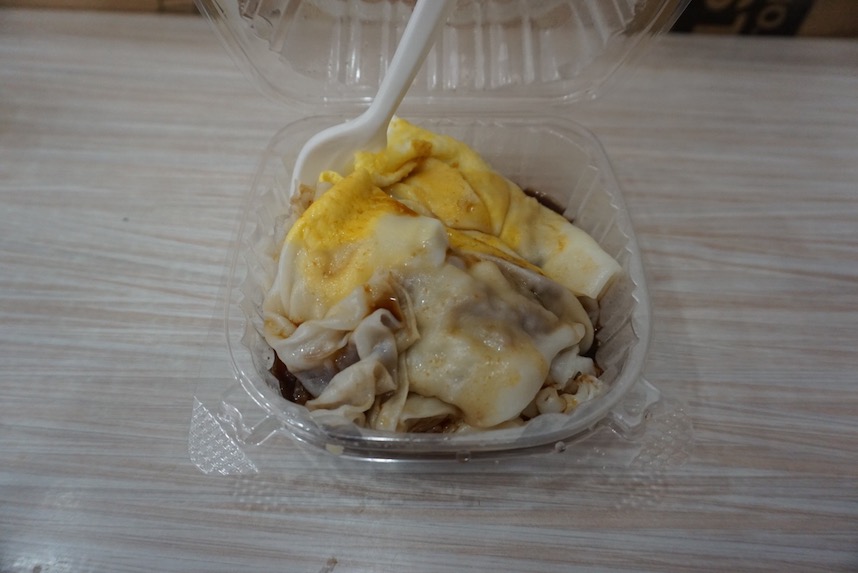 Throughout Brooklyn’s Chinatown and regardless of weather, several food carts can be found serving a mixture of street food like kebabs and stir-fried noodles. Some of the most popular carts serve Cantonese cheung fun, a breakfast dish of steamed rice rolls with meat or seafood. The cheung fun is cooked in a metal steamer shaped like a small cabinet drawer. Each drawer on the steamer contains a detachable metal tray, to which the cook can add meat, eggs, vegetables or shrimp before being mixing it with a ladle of liquid rice flour. Once everything is evenly mixed, the tray is placed back into the metal steamer to cook. The finished rice rolls are served with a slightly sweet soy sauce. Bottles of Sriracha and hot mustard are also available.

An alternative to this street cart version would be a visit to Hong Kong Dim Sum. Serving a variety of cheung fun, including barbeque pork, shrimp or beef, the restaurant also has congee, a savory rice porridge. Service is fast, and since the beef with egg is the most popular version, these are usually ready for takeout for customers in a rush. Rice rolls are $2-$2.75 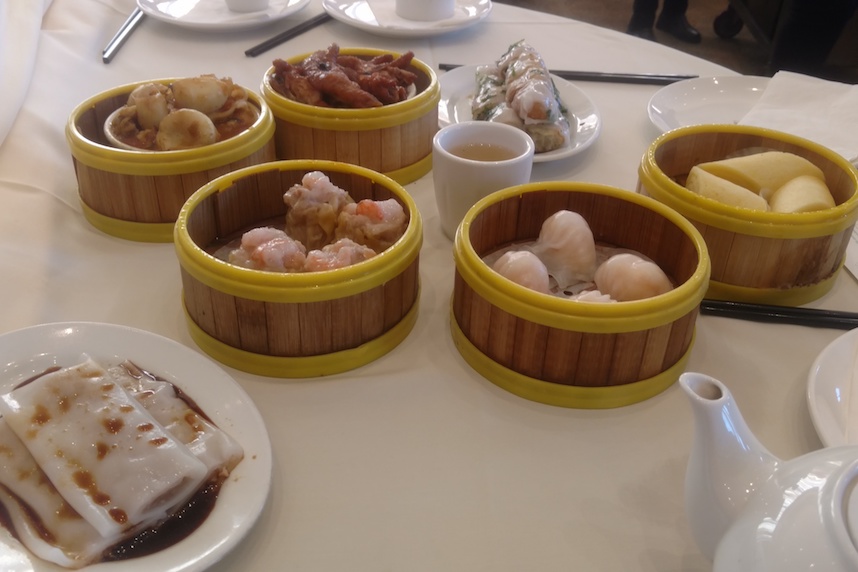 Brooklyn’s Chinatown is home to some of the largest dim sum restaurants in New York. One of the best is Park Asia, a great place to experience a classic dim sum meal. Containing two levels, the restaurant is large and hectic during weekend mornings, the best time for dim sum. Service is fast–several carts will descend on your table as soon as you arrive, flooding it with dumplings and chicken feet before the complimentary tea is even poured. Unlike some dim sum restaurants, the carts here rotate frequently, insuring freshness.

The shu mai, a pork and shrimp dumpling, and the steamed beef tripe, are both especially good at Park Asia. But one of the best items is the baked barbeque pork buns. Filled with sweet pork, the top of each bun is covered in a sugar-laden crust made with plenty of butter. It’s part dessert, part savory meat sandwich. A dim sum meal for five people will cost around $70-$80.