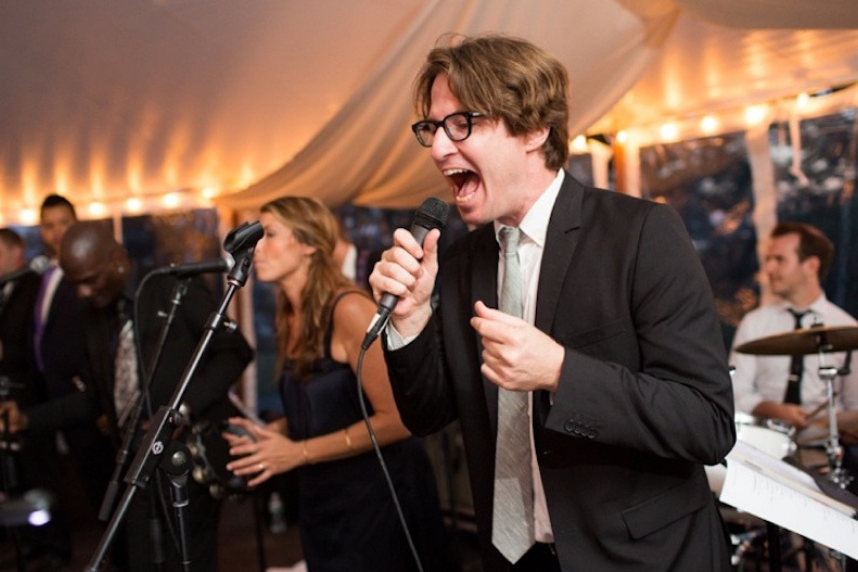 Musicians and friends of musicians always get the best bands to play their weddings. But if you don’t have those kind of connections, Lucy Music is the best way to book a real band for your wedding, and not a “wedding band” from a generic agency.

The common thread between all of the Lucy Music bands is that they are all friends who work well together because there’s chemistry, unlike manufactured bands created by wedding band agents who audition “hired gun” musicians. Each band, which often plays under a “cover band” alias for weddings and parties, has its specialty, but all of them will bring on the dance party for a multi-generational group of guests.

Lucy Music is also helmed by a musician who has decades of experience coordinating shows all over the world: drummer Aaron Thurston, who’s toured 25 countries as a Jazz Ambassador for the U.S. State Department (yes, there is such a thing!), performed with indie darlings the French Kicks, and now plays with “vintage pop” star Kat Edmonson’s band as well as Lucy Music’s flagship band The Engagements.

You can see many of the acts in Lucy Music’s stable live in NYC. Baby Soda Jazz Band, for instance, plays every Sunday at 10pm at St. Mazie in Williamsburg and most Saturdays at 8pm at Brooklyn Firefly in Bay Ridge. The Loyales will play Sunny’s on Thursday, March 28. Pencil in those dates, and check out the bios and videos of all of Lucy Music’s bands below.

“With your eyes closed, you could have been on Bourbon Street.”–NY Daily News

Baby Soda is a crowd favorite with its own fan following. Their repertoire of early 20th century jazz, New Orleans staples, and American Songbook classics is perfect for the multi-generational guest list of a wedding. It’s a uniquely celebratory sound they’ve cultivated. They’ve performed in concert halls and on television and radio, but can regularly be seen in and around New York.

The Loyales is a group dedicated to “feel-good” music, especially classic dance songs of past decades, both popular and overlooked. As a group, The Loyales refrains from bombarding guests with sound, instead drawing them in with a warm, classic sound that is undeniable.

This rootsy, juke-joint kind of party band is Lucy Music’s most requested band and they can customize their set list around your musical tastes. They can go in any direction, from soul to classic rock, to pop and even rare funk. Shunning the usual, obvious song choices, The Loyales cover tons of classics that get everyone dancing, while staying away from the songs played by every other wedding band.

The Prenups are “Ambassadors of Rock.”  They’re masterful musicians who encapsulate the whole-hearted fun of rock ‘n’ roll music. They can rock an entire party all night with only 4- or 5-musicians – friends and members of successful indie bands (The Gravel Pit, The Gentlemen, The Figgs.)  Their sound is big, gritty, soulful, fun, and sincere.  They are as likely to wow with a high-energy Ray Charles or Chuck Berry cover as they are with The English Beat or The Replacements or the Stones.  They lean on 60s and 70s soul and rock, and they pack the dance floor. This is a true rock band. Plus, they’re simply terrific guys (and a gal! – Ed’s wife Jenny is often brought on to sing with them.  The leader of Jenny Dee and the Deelinquents, she brings lots of classic “girl-group” material to the band, including The Shirelles, The Ronettes, Tina Turner, and more.)

The Engagements is Lucy Music founder Aaron Thurston’s band, best known for its deep well of 80s material, done not in the costumed, clownish way that most “80s cover bands” are known for, but rather with a serious but fun approach that belies the bold, synth-heavy sound of that era. They’re also steeped in plenty of classic Motown, funk, soul, 60s, 70s, and even 90s songs. Their song list reveals more about their range of material.

“The rock and pop string quartet.”

Tribute String Quartet plays reception music that will amaze your guests. They’ve found praise from none other than pop legends A-ha for their cover of “Take On Me”, and have recently performed in the bands of D’Angelo and Björk. However, TSQ is best known for how well they fit into weddings that require a balance of traditional with non-traditional. Perfect for: Ceremony, cocktails, dinner, and smaller weddings.