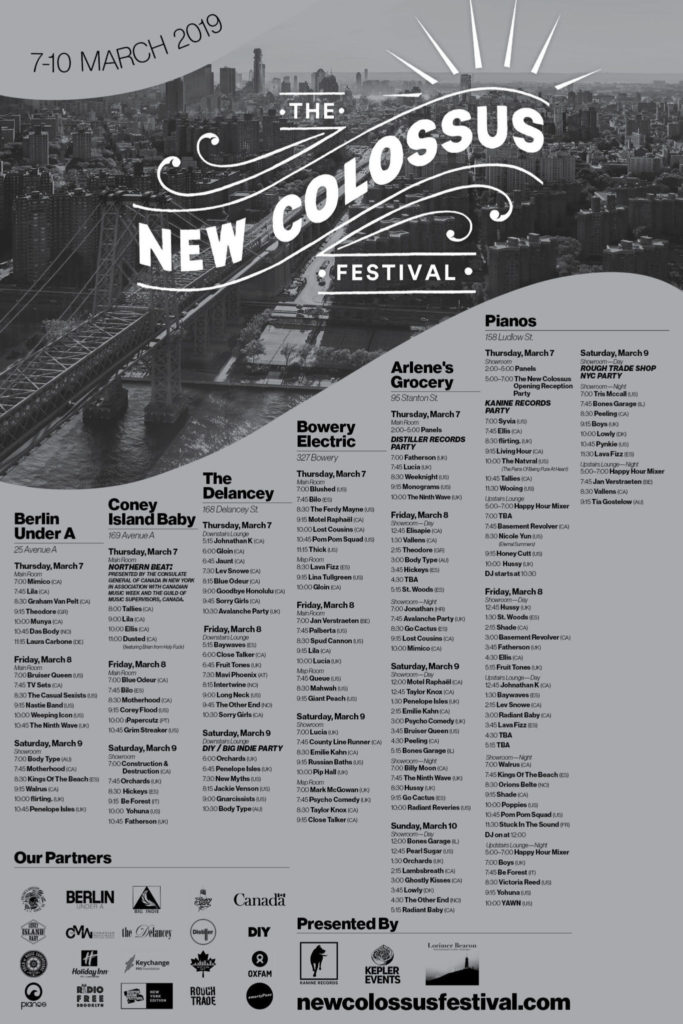 A brand-new music festival in NYC is looking to fill a void left by the now-defunct CMJ Music Marathon when it comes to showcasing up-and-coming acts.

The New Colossus Festival will make its debut from March 7 through 10 at several venues on the Lower East Side and East Village, including Arlene’s Grocery, Coney Island Baby, and the Bowery Electric (Registration and a kickoff party will take place on March 6 at Pianos). The event boasts over 100 handpicked emerging artists from the around the world as well as music industry panels. For the musical acts, this new festival will serve as a stopover before they head down to Austin, Texas for SXSW that starts on March 8.

Spearheading the four-day event are Mike Bell of management and consulting firm Lorimer Beacon; Lio Kanine of indie label Kanine Records; and Steven Matrick of artist management company Kepler Events—all of whom are based in the city. “We wanted to create a space that is squarely focused on sharing great emerging music from around the world,” Bell tells Brooklyn Based. “No flash, no stars, no corny brand activations, no noise—only music. The goal is to provide performers an opportunity to connect with local music fans and music industry and grow.”

Asked why the festival is taking place in New York, Bell explains that the organizers couldn’t imagine doing this anywhere else. “New York City has one of the richest musical histories in the world and has served as a welcoming point for people from across the planet. The number of creative people who launched their careers from here is countless.”

The name of the event is a direct reference to the title of poet Emma Lazarus’ famous sonnet for the Statue of Liberty. “We deeply believe in its bold, welcoming message and aim to carry on this very New York tradition on the Lower East Side, the epicenter of the American ‘melting pot,'” says Bell.

In his view, what distinguishes New Colossus from other music festivals is that the lineup is made up of international artists. “The main idea was to pick bands who are (A) good, and (B) ready to take on and/or build their careers the U.S.,” says Bell. “In terms of programming, the artists were handpicked mostly by Lio. He’s got a great ear and booked some rad bands. On top of running his label (Kanine Records), I don’t know how he did it.”

The artists appearing at New Colossus hail from such countries as Canada, the U.K., Italy, Israel, Croatia, Portugal, France, Spain, and the U.S. (A preview of some of the acts is below.)

“The international flair was intentional,” Bell says. “We’ve done a lot of traveling to music festivals around the world and have seen some incredible things. There are so many great bands out there and we wanted to share them from fan to fan. Most of the time, it was us going to the bands to do the bookings.”

The New Colossus Festival could provide the spark for more showcases of emerging acts that was once the domain of CMJ. And at a time when local music venues have shuttered or are under the threat of being closed down due to rising rents, any opportunity to hear new music is welcomed. “We certainly hope there will be a ‘next year’ and it really all depends on how this one goes,” says Bell of the New Colossus’ future. “We hope bands feel the shows were worth the time and expense. Some are traveling from quite a distance to get here! We also hope people who attend the festival as fans and industry find some great new music.”

A badge for the entire four-day festival – including access to the venues and panels – costs $50. For the full-lineup of artists and events, and to purchase tickets, click here. Some of the acts to catch include: 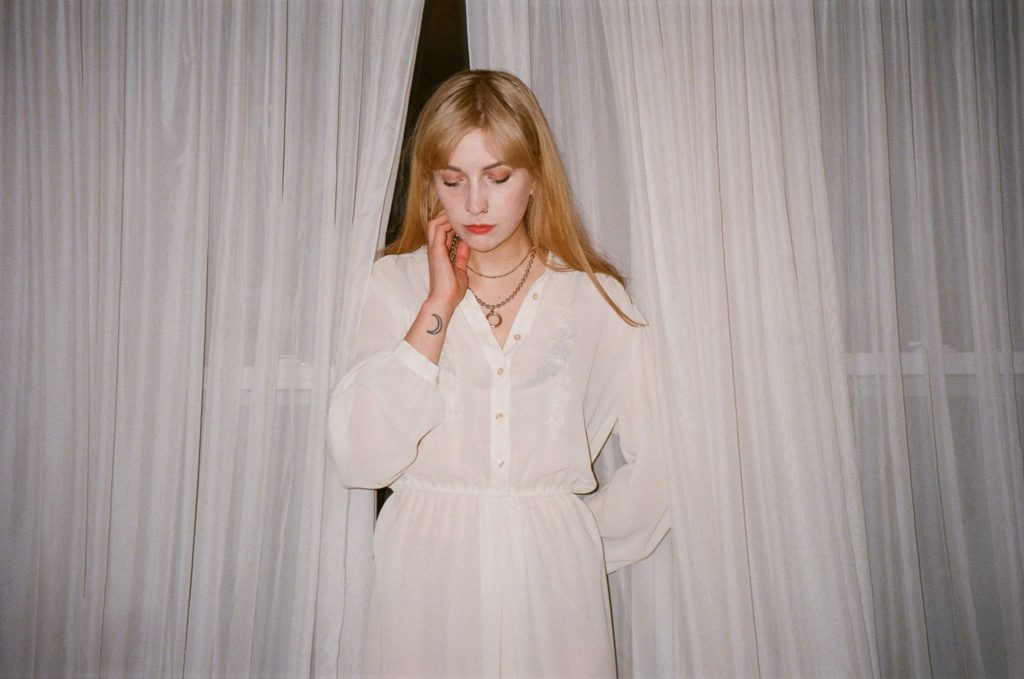 The stage name of Linnea Siggelkow, Ellis’ music is dreamy and airy folk pop as evident on her excellent EP, The Fuzz, from last year. Since then Ellis has signed with the Fat Possum label, which will be releasing The Fuzz in a physical format. Most recently, Ellis put out a fantastic new single, “Something Blue.” 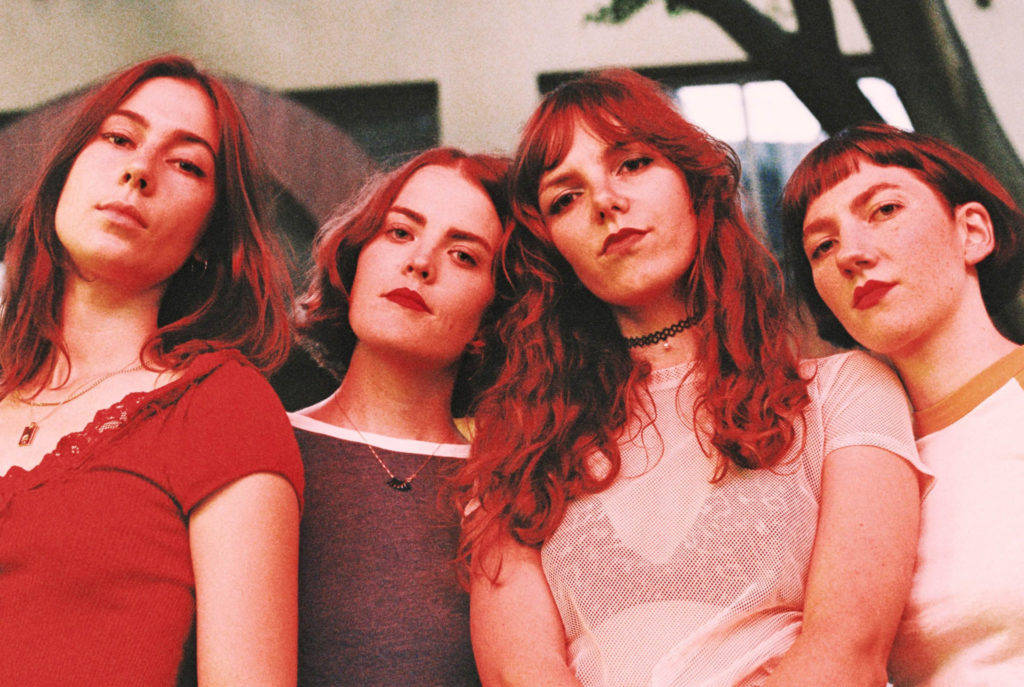 This has been a great time for Australian indie female artists in the last couple of years—some of the amazing artists that have garnered critical acclaim include Courtney Barnett, Jen Cloher, Gordi, and Stella Donnelly. Add the all-female band Body Type to that mix. The quartet from Sydney put out their self-titled EP in 2018, featuring some passionate and earnest music (which they described as ‘scuzz rock’), a small taste of what’s to come hopefully in the form of a full length. 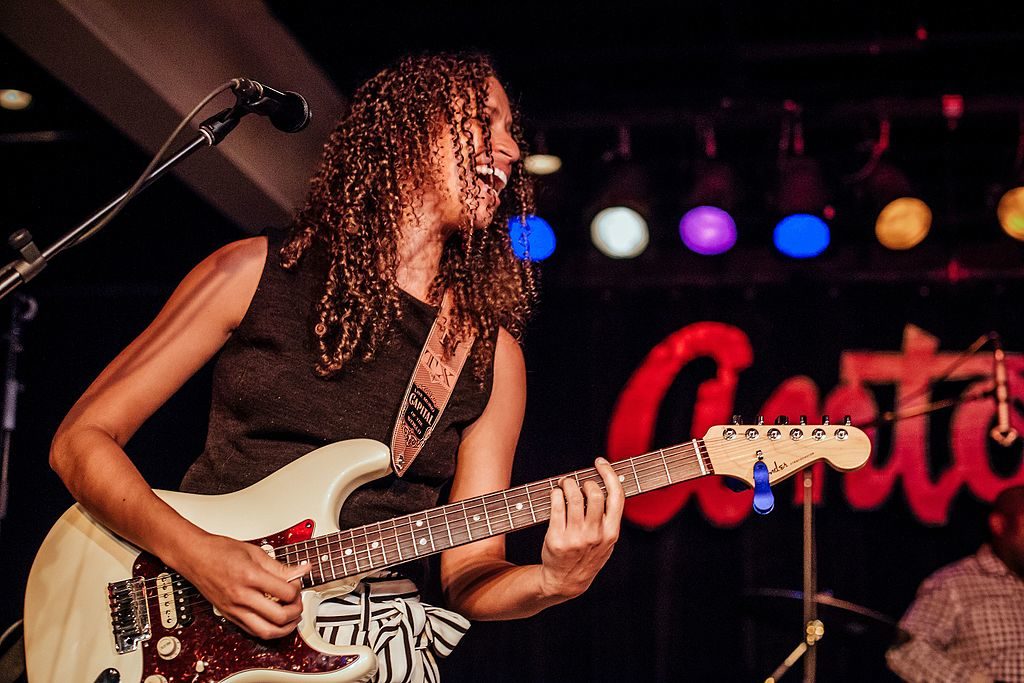 Austin’s Jackie Venson plays at The Delancey March 9 as part of The New Colossus Festival this week. Photo: Jackie Venson

This Texan may be one of the best guitarists you never heard of. Venson’s music is mostly rooted in the blues rock tradition alongside some pop and funk influences. Her pyrotechnic guitar playing evokes the passion of Jimi Hendrix and Stevie Ray Vaughan alongside a soulful and energetic voice to match. Having released her third studio album The Love Suite last year, Venson recently unveiled her latest single, the infectious “Witchcraft.” 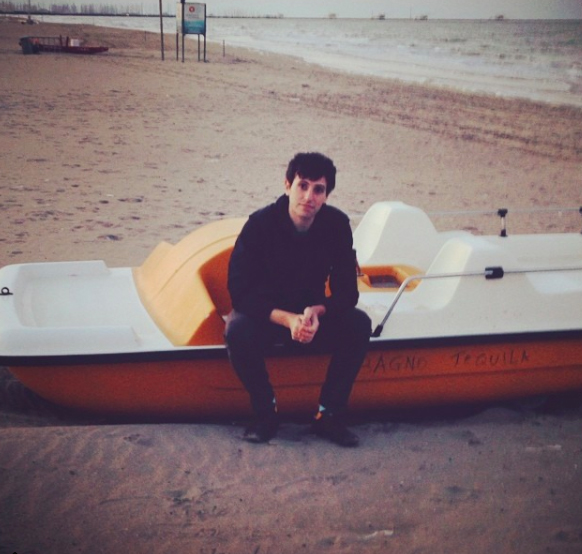 Kip Berman is a familiar name to indie pop fans as the driving force behind The Pains of Being Pure at Heart. Lately, he’s taken up a new project, this time under the moniker of The Natvral. In contrast to the upbeat electropop of The Pains of Being Pure at Heart’s last studio album, The Echo of Pleasure, Berman’s latest outing via the Know Me More EP is dreamy folk music–it also includes an exquisite cover of Leonard Cohen’s classic song “Suzanne.” 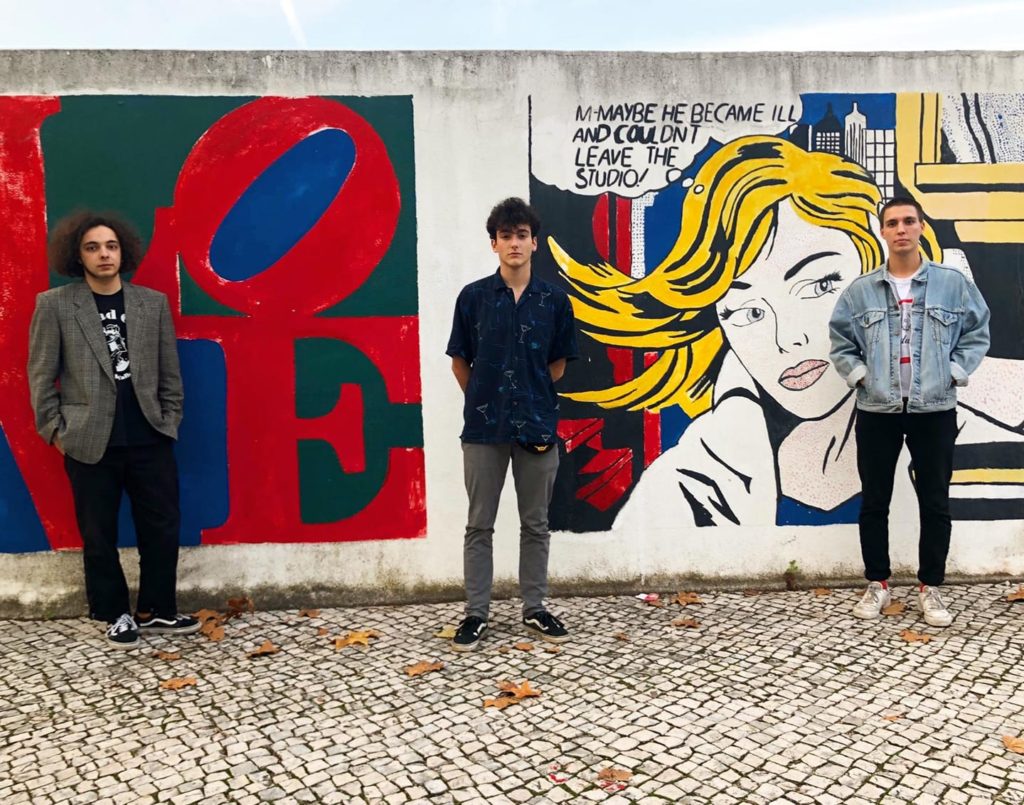 One probably wouldn’t associate Spain with the distinctively American invention of surf rock, but this trio from Palma Del Mallorca are the exception. Go Cactus’ sound draws inspiration from that particular ‘60s genre, mixed with the fuzzy and noisy garage rock sound of the Black Keys–as heard on their 2017 EP Hi, We Are Cactus.