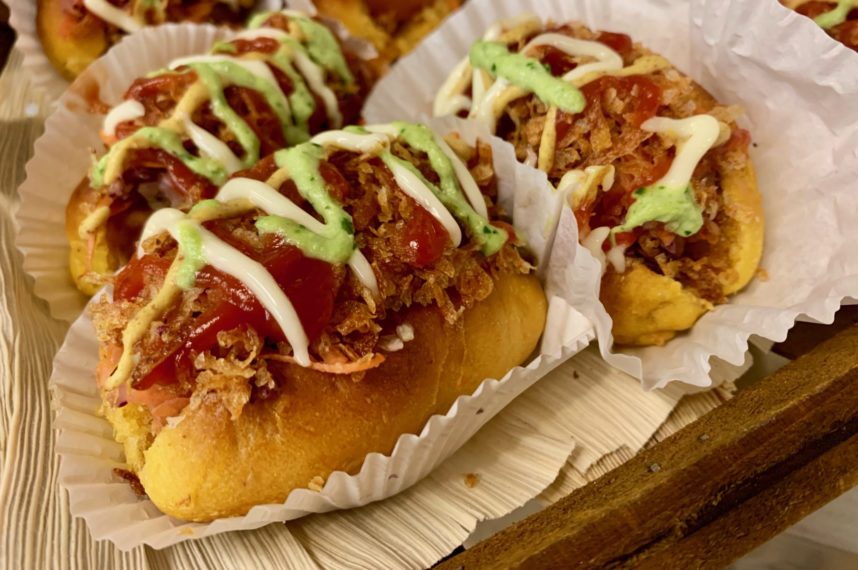 Smorgasburg is back for the 2019 outdoor market season, and this year there are 21 mouth-watering new vendors among the staggering 100 food stalls. So, if Smorgasburg has made you feel overwhelmed in the past, you’re gonna need to steel yourself for a mini panic attack this time around. Take deep breaths and find solace in the aromas of cuisines from across the world. The weekend market kicks off at East River State Park on the Williamsburg waterfront on Saturday, April 6, 2019, where it will reside on Saturdays through the season, and you can find Smorgasburg on Sundays at Breeze Hill in Prospect Park starting April 7. We sampled a handful of the new food entrepreneurs that you’ll want to add to your must-try bucket list: 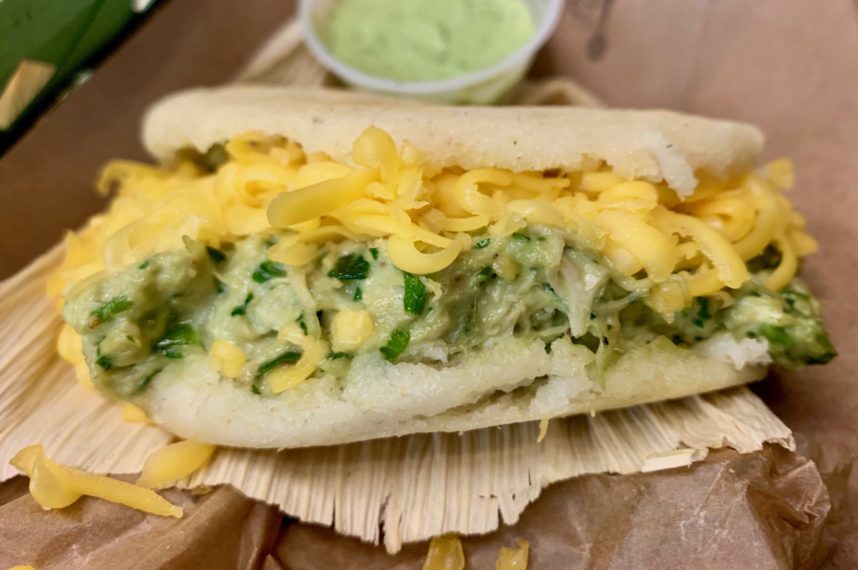 The reina pepiada arepa from Váyalo! Cocina, pictured above, would make the ideal sandwich on a hot summer day. Its gluten-free griddle cake is split and stuffed with a creamy, cool, crave-worthy mixture avocado, chicken, parsley, mayo, and cheese. It’s like a chicken salad sandwich made in heaven, by way of Venezuela, the home country of the 3 women who run this food counter. At the top of the page, a finger food version of their pleasantly overstuffed perros venezolanos (Venezuelan hot dogs) are topped with teeny tiny sweet potato fries and a colorful medley of drizzles, including guasacaca cremosa, a creamy-yet-tangy avocado sauce. (Saturdays only) 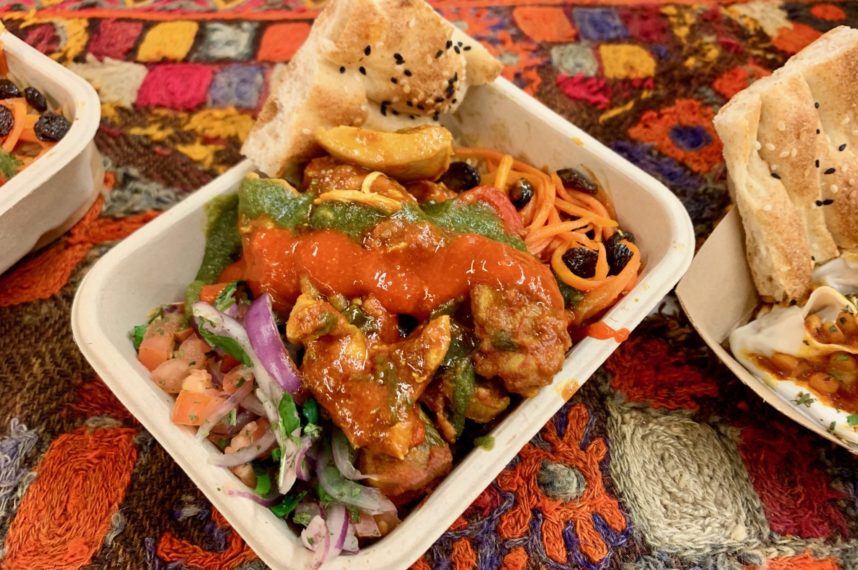 Afghani cooking that goes beyond kebabs is a hard-to-find cuisine in NYC, and Nansense is nailing it. Owner Mo Rahmati won the Rookie of the Year Vendy Award in 2018 and has since taken a break from his truck to focus on catering and the Smorgasburg Winter Market. We fell in love with his rich, saucy chicken korma, served over basmati rice, sandwiched between a scoop of kabuli (warm carrots, raisins, and cardamom), and a handful of salata (fresh tomatoes, red onions, cilantro, lime, and mint), and garnished with a piece of seeded Afghan bread. (Saturdays and Sundays) 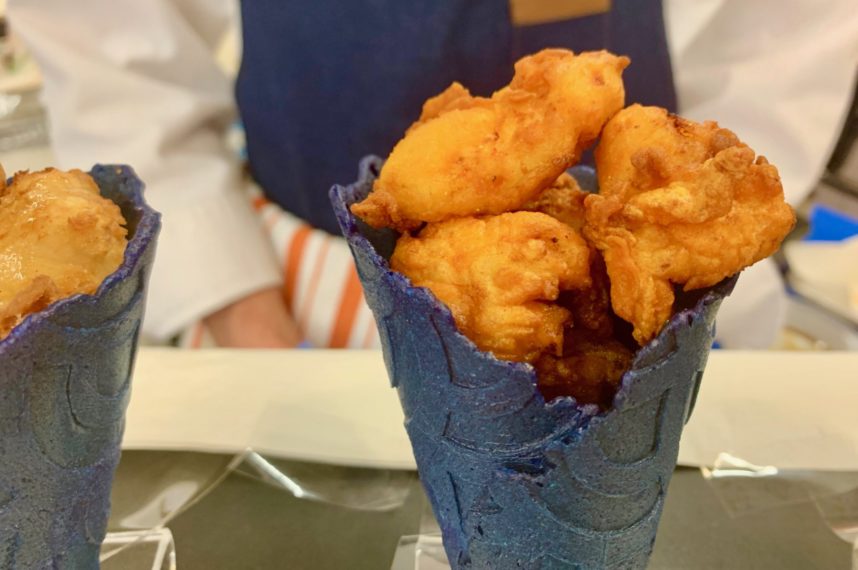 The Blue Chicken prepares its namesake in a sous-vide, then fries it, before piling nuggets into a blue corn waffle cone.  Photo: Kara Zuaro

The Blue Chicken‘s take on chicken and waffles involves crisp, juicy, sous vide-cooked, buttermilk-fried chicken nuggets, which are piled into a salted blue corn waffle cone and doused with maple glaze or habanero honey. The waffle cones bring to mind the French Laundry’s famous salmon cornets, hinting at young chef Aaron Ratner’s recent studies at the CIA in Napa Valley. And the name of the stall is a nod to the mascot at his undergrad alma mater, the University of Delware’s Blue Hens. This addictive fried chicken also makes its way onto a pair of sandwiches, one served Nashville-hot and the other topped with poblano aioli and house-made pickles. Both, please! (Saturdays and Sundays) 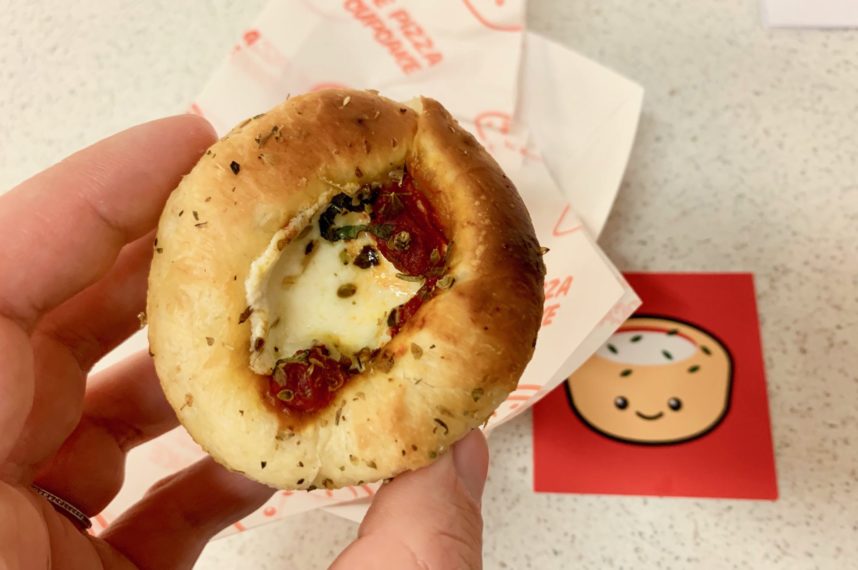 The Pizza Cupcake is the perfect little bite at Smorgasburg. Photo: Kara Zuaro

Let’s be honest: Smorgasburg can be tough for small children and other non-adventurous eaters. How about serving something innovative and tasty that won’t trigger any food fears? Enter The Pizza Cupcake. Just a little bigger than a round of pepperoni, these softy, chewy, doughy little snacks are far less messy than a slice of pizza (also worth noting if you’re dragging a kid to Smorgasburg) and they come in 4 adorable flavors—margherita, pepperoni, zucchini, and funghi. They’re already a hit at the Smorgasburg indoor market and are sure to win some more hearts when the market moves outside. (Saturdays only) 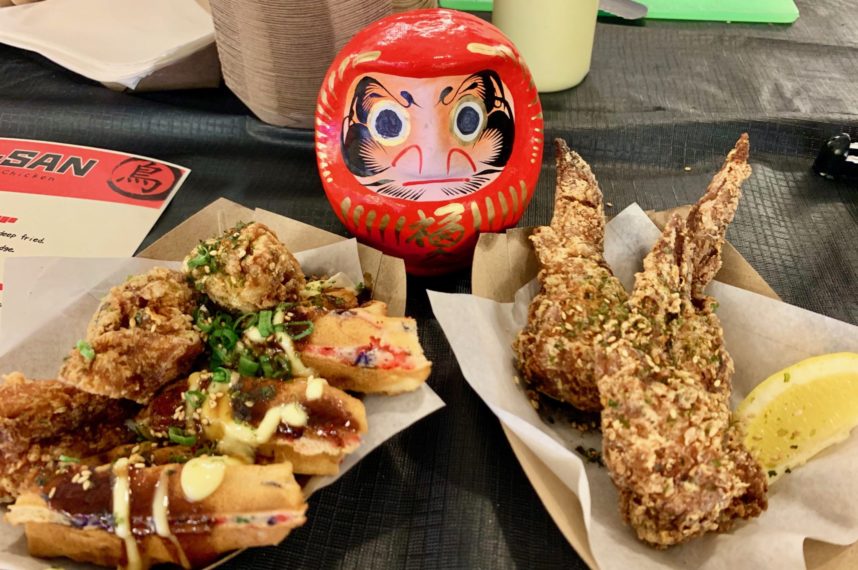 Karaage, that is, Japanese fried chicken, meets American comfort food at the Tori-San counter. At left, juicy, crispy, deep-fried chicken thighs complete an okonomiyaki-inspired dish. But instead of a savory Japanese pancake, Tori-San employs waffles as the vehicle for barbecue sauce and kewpie mayo. At left, a de-boned chicken wing is stuffed with pork-scallion gyoza filling and then deep-fried. They’re served with a lemon wedge and a wasabi-mayo dipping sauce, and yes, it’s as ridiculous and delicious as you’re imagining. (Saturdays and Sundays) 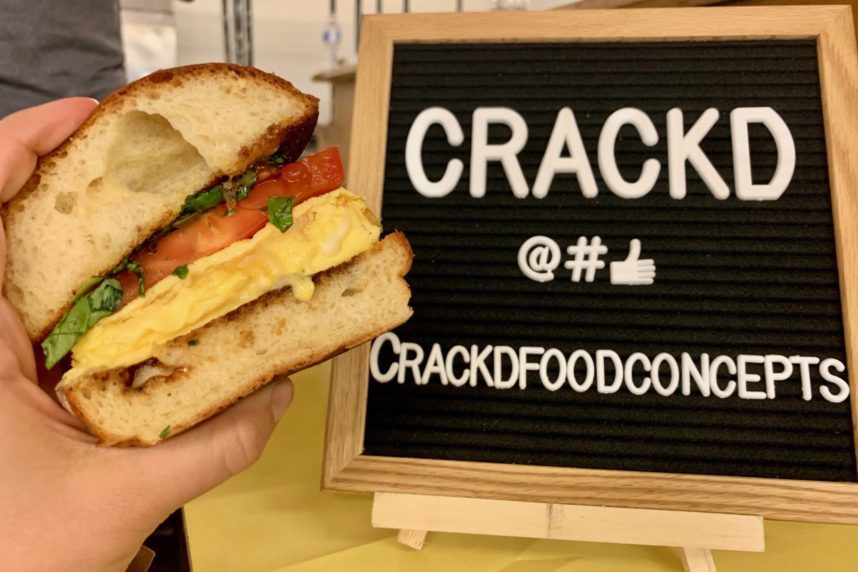 A Japanese style of fried egg is the secret to Crackd egg sandwiches. Photo: Kara Zuaro

This egg sandwich is like the love child of the tamago from your favorite sushi spot and the egg-and-cheese roll from your corner deli. The friendly team behind Crackd believes that egg sandwiches should be enjoyed well beyond the breakfast hours, and their specialty is Japanese tamagoyaki, a fluffy, multi-layered egg patty that is prepared in a traditional square frying pan (called a tamagoyakiki). These all-day egg sandwiches are served on pain-au-lait buns from Brooklyn’s own Bien Cuit. We liked the Caprese, an egg and mozzarella sandwich with tomatoes, basil, and balsamic, and we’d go back for the Yolkel, a tamagoyaki with jack and pimento cheese, Carolina pulled pork, and pickled red onions. (Saturdays and Sundays) 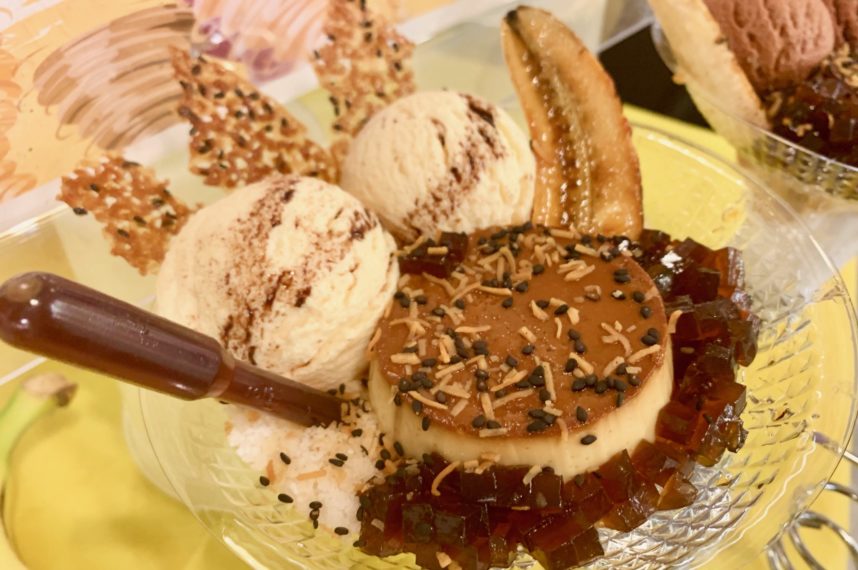 Kochin’s desserts are like snow cones with every French-Vietnamese fixin’ you can imagine. Photo: Kara Zuaro

The giant, built-to-be-shared Vietnamese desserts at Kochin have a lot going on. They’re kind of like snow cones with every French-Vietnamese fixin’ you can imagine. They have a variety of options, but here, over a base of shaved ice, you’ll find silky flan topped with toasted coconut and black sesame seeds, tiny cubes of coffee-flavored jelly, a brûléed banana, a couple of scoops of ice cream poked with crispy, sesame-studded lace cookies, and a little pipette of coffee to squirt over the top. The bitterness of the coffee plays nicely off the light sweetness of this refreshing dessert. (Saturdays and Sundays) 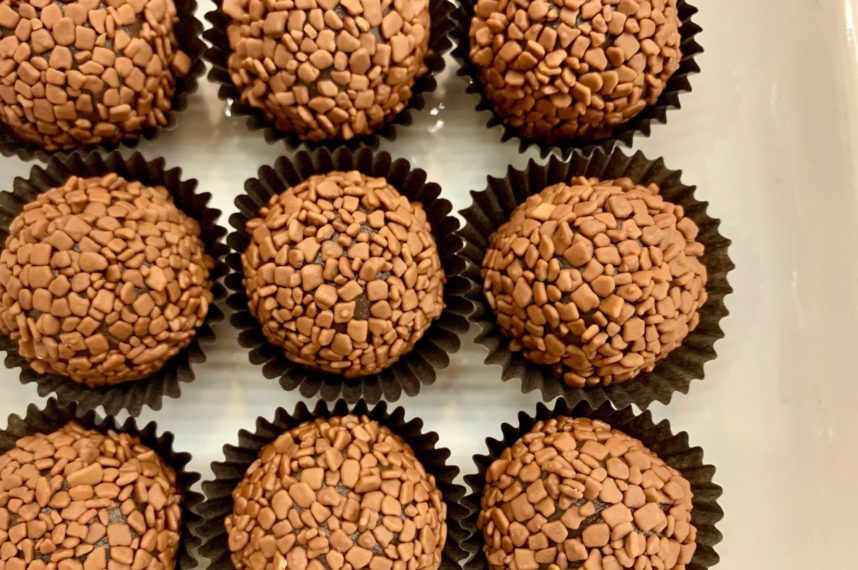 The Petisco Brazuca crew says that in their homeland of Brazil, you cannot have a party without coxinha (pronounced “co-sheen-ya”) and brigadeiros. For those of us who have yet to be invited to any Brazilian celebrations, their coxinha are little teardrop-shaped orbs of fried dough filled with chicken, spinach, cheese or dulce de leche. At this joint, you can order a little bucketful of coxinhas as an appetizer and/or finish your Smorgasburg eating spree with a brigadeiro, a creamy little fudge ball of chocolate and condensed milk, pictured above. (Saturdays and Sundays)