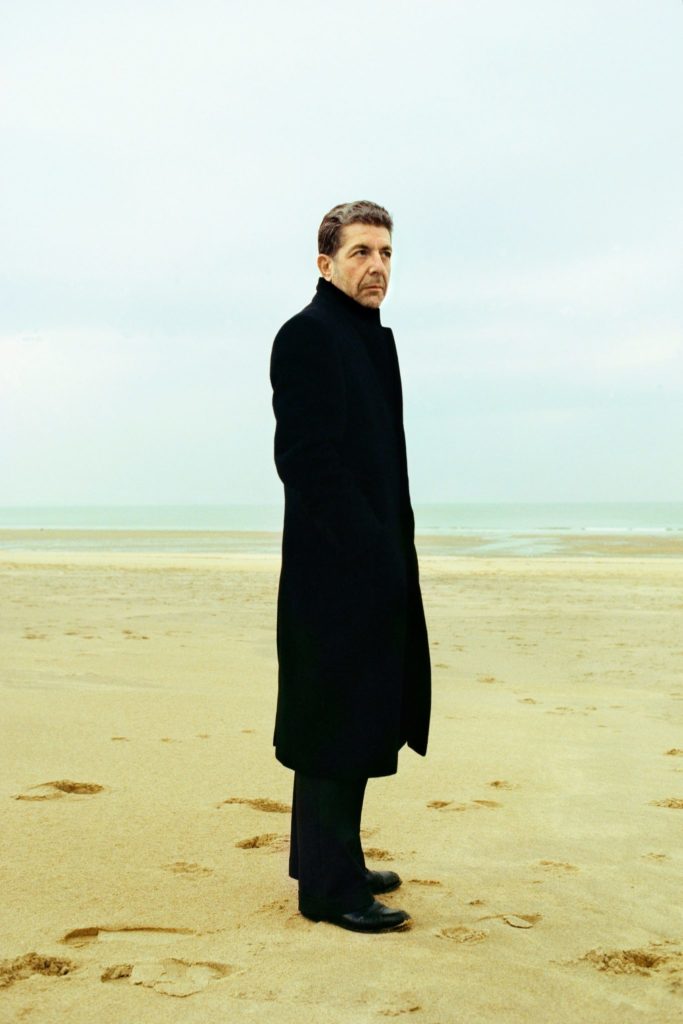 Leonard Cohen, Trouville 1988, taken from a photograph by Claude Gassian.

One of the most memorable concert experiences of my life occurred in February 2009, when I saw Leonard Cohen for the first time at the Beacon Theatre. Back then, Cohen was 74 years old and hadn’t performed in the United States for 15 years after maintaining a relatively low profile. As I sat in my seat for the sold-out show, I was wondering what to expect (and I’m sure he probably felt the same way). Suffice to say, it was a great gig in which he performed all his best-known songs with warmth, style and charisma. As I wrote in my review for the now defunct-music site Spinner after the show: “Cohen was very spry in his moves. When he donned his fedora and sang with knees slightly bent, and hands cradling the microphone, Cohen personified cool. His distinctive and ominous vocals evoked both romantic longing and soul, from his spoken word reading of ‘A Thousand Kisses Deep’ to ‘So Long, Marianne.’”

For the last six decades, the Canadian icon’s works have been part of pop culture lexicon: from his 1966 novel Beautiful Losers, to such famous songs as “Bird on a Wire,” “Suzanne,” “I’m Your Man,” and of course “Hallelujah,” which has become a pop music standard over the years. An indication of this artist’s wide reach is how often his songs have been covered by numerous artists, including R.E.M., Jeff Buckley, Judy Collins, John Cale, Pixies, k.d. Lang, Billy Joel, Tori Amos, Jennifer Warnes, and Rufus Wainwright. Up until his death in 2016 at age 82, Cohen remarkably was still actively touring and recording, never wavering from his unique musings on life’s matters and complications—and rendered with spirituality and sensuality through his deep talk-singing style.

In November 2017, the Musée d’art contemporarie de Montréal (MAC) mounted a popular multimedia exhibit, Leonard Cohen: A Crack in Everything, focusing on the Canadian icon’s life and works via art. Now the show is touring around the world, beginning at the Jewish Museum. It is quite fitting that the show is taking place in New York City, given that one of Cohen’s famous songs is “Chelsea Hotel #2,” a reference to his affair with Janis Joplin at that famed hotel. The immersive show spans the museum’s three floors and contains commissioned contemporary works by 14 artists and well as interpretations of Cohen’s songs by 18 musicians.

What makes this particular show different from previous museum retrospectives on legendary musicians is that there are really no photos, handwritten lyrics, artwork, instruments or memorabilia from Cohen’s personal collection. Rather, A Crack in Everything chronicles Cohen’s life and art through visuals and audio based on interpretations by other artists. That approach enables the visitor to see, hear and feel the legend in a new yet still familiar light—and often through participation. 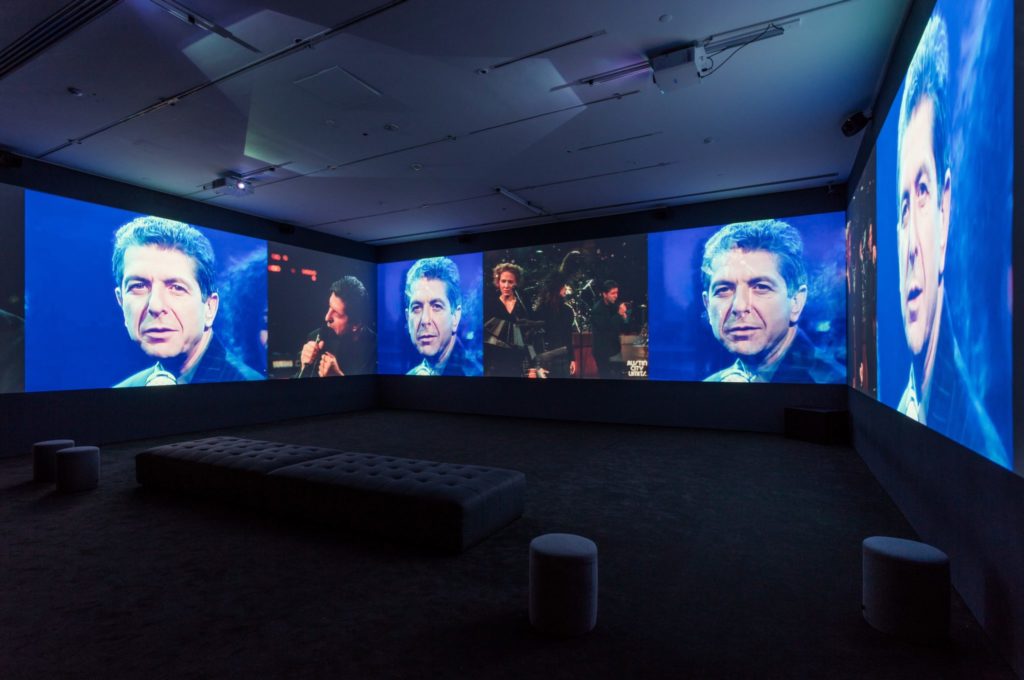 For example, the work “I Heard There Was a Secret Chord” by Daily Tous Les Jours is an audio installation in which visitors can hum “Hallelujah,” into microphones along with other humming voices heard through speakers based on real-time data, creating this invisible vibration. It’s experiences like these that make the exhibit, co-curated by John Zeppetelli and Victor Shiffman of the MAC, fascinating and fun even for those with just a passing familiarity of Cohen’s work.

Other highlights include “Passing Through,” a large scale work by George Fok that features audio-visual montages of Cohen throughout the years and celebrates “his singular voice, his music, his charismatic persona, and his inimitable stage presence.” Watching Cohen, especially during his live performances, on different screens in the gallery was a very moving and powerful experience. 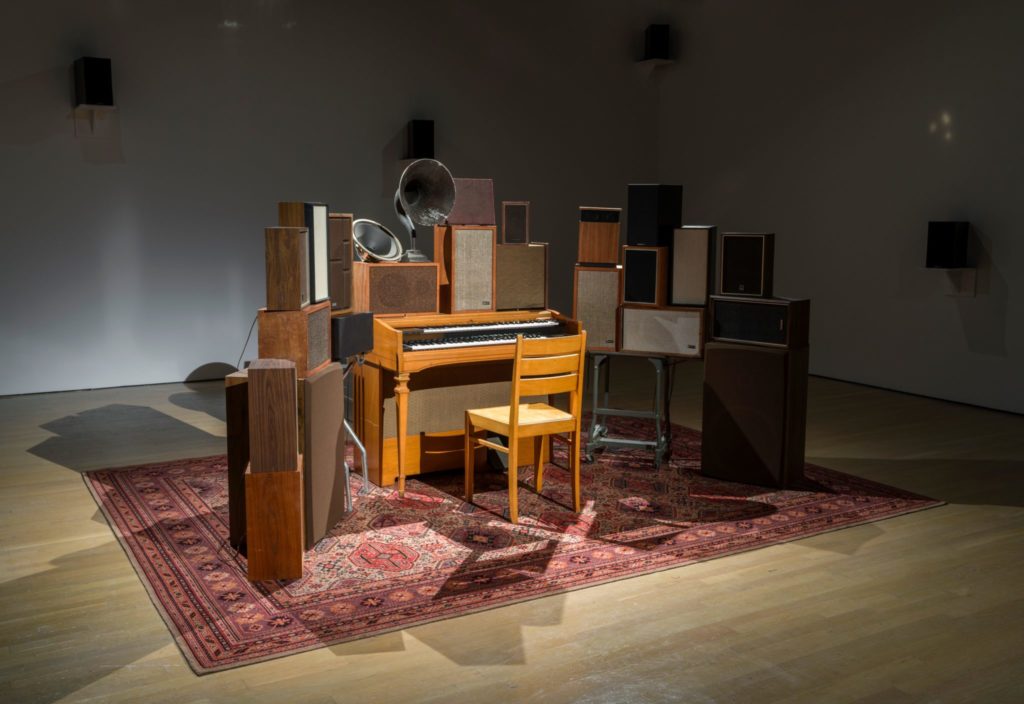 In “The Poetry Machine,” an installation by Janet Cardiff and George Bures Miller, you’re invited to press a key on a vintage Wurlitzer surrounded by old speakers and gramophone horns. In response you hear Cohen recite a poem from his “Book of Longing”— in fact, each key on the instrument features him narrating a different poem. 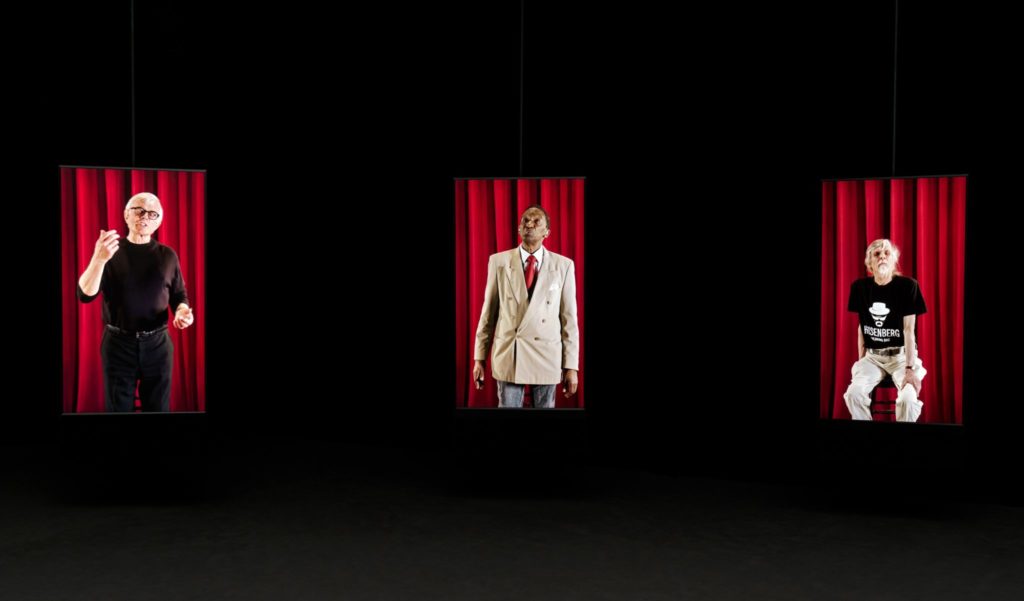 “I’m Your Man,” a video installation by Candice Breitz, features 18 random Leonard Cohen fans singing their interpretations of tracks from Cohen’s 1988 comeback album, “I’m Your Man.” They are accompanied with backing vocals from the Shaar Hashomayim Synagogue Choir, an all-male choir from Cohen’s hometown of Montreal. It was both amusing and poignant to hear strangers from all walks of life sing a song like “First We Take Manhattan.”

A darkened room is the setup of Ari Folman’s work “Depression Room,” in which the visitor experiences the demons of depression—which Leonard Cohen struggled with during his life. When the person lies down, he or she will hear the song “Famous Blue Raincoat”, while the lyrics are projected on the walls. That particular gallery allows people to go into the room one at a time, and is sure to be a hit. 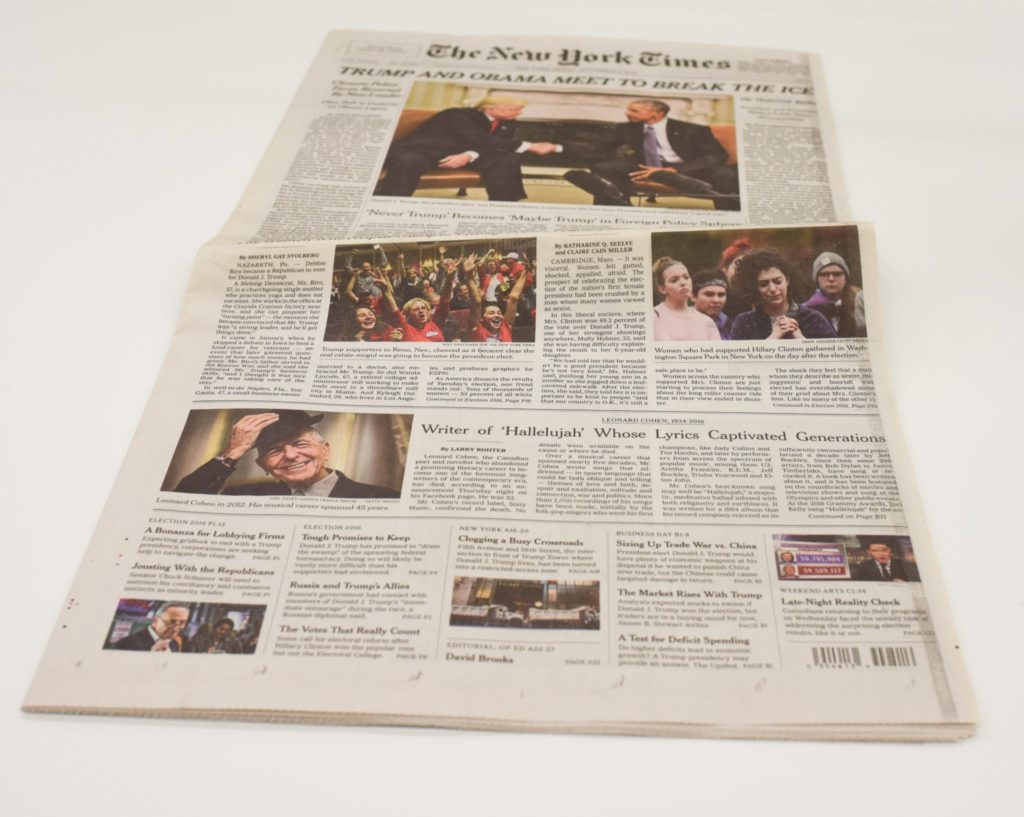 “The New York Times, Friday November 11, 2016” by Taryn Simon, displays of a copy of the newspaper enclosed in a glass case featuring Cohen’s obituary on the front page (he died on November 7). Above the obit is a photograph of a meeting President Barack Obama and then-President-elect Donald Trump. The juxtaposition is ironic for two reasons: 1) one of Cohen’s best songs is titled “Democracy,” from his 1992 album The Future, a powerful and thought-provoking work whose common refrain is the lyric of “Democracy is coming to the U.S.A.” And 2), while they can be at times very melancholic and dark, Cohen’s music and message often serve to unite and inspire people rather than divide them―which can’t be said for the rhetoric coming out of our current political leaders. 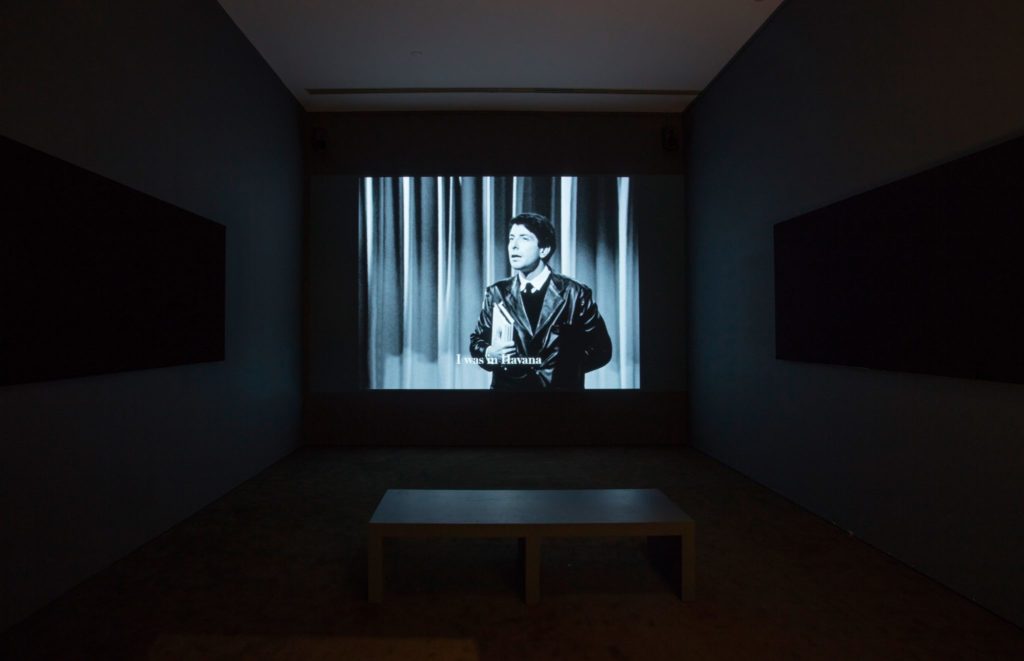 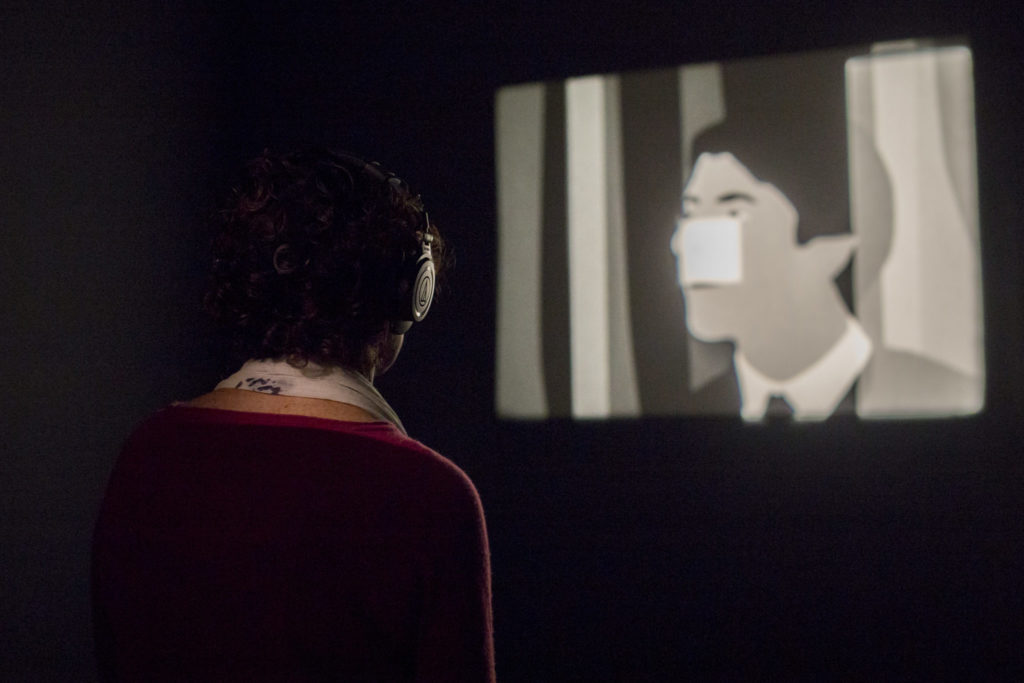 Two video works re-imagine previous archival video and audio clips of Cohen from the 1960s. One is “Cuba in Cohen” by Christophe Chassel, which remixes and sets to melody, Cohen’s reading his 1964 poem “The Only Tourist in Havana Turns His Thoughts Homeward,” while using footage from a 1965 documentary Ladies and Gentlemen . . . Mr. Leonard Cohen. The other, “Cohen 21,” by Kota Ezawa recreates through animation a scene from the same documentary and incorporates geometric shapes inspired by “Rhythm 21,” a 1921 silent film by the German artist Hans Richter.

Other highlights of “A Crack in Everything” include a video projection of Cohen’s self-portraits, and a room where visitors can listen to musicians interpreting Cohen’s songs. Among them are Feist on “Hey, That’s No Way to Say Goodbye”; Ariane Moffatt with the Orchestre Symphonique de Montréal on “Famous Blue Raincoat”; Moby with “Suzanne”; Julia Holter with “Take This Waltz”; The National with Sufjan Stevens, Ragnar Kjartansson, and Richard Reed Parry on “Memories”; and Lou Doillon with “Famous Blue Raincoat.”

On the track “Pennyroyal Tea,” from Nirvana’s 1993 album In Utero, the late Kurt Cobain sang: “Give me a Leonard Cohen afterworld/So I can sigh eternally.” It’s the sentiment and feeling that one gets from viewing “A Crack in Everything”—we are entreated into Leonard Cohen’s world through words, music, and photography and video, a sumptuous feast for the senses. As demonstrated by the exhibit, his body of work inspires many people in different ways, yet all of these unique artistic expressions together still carry the aura and essence of the legend: his musings on life and death, his wry sense of humor, and most importantly his humanity and spirituality. 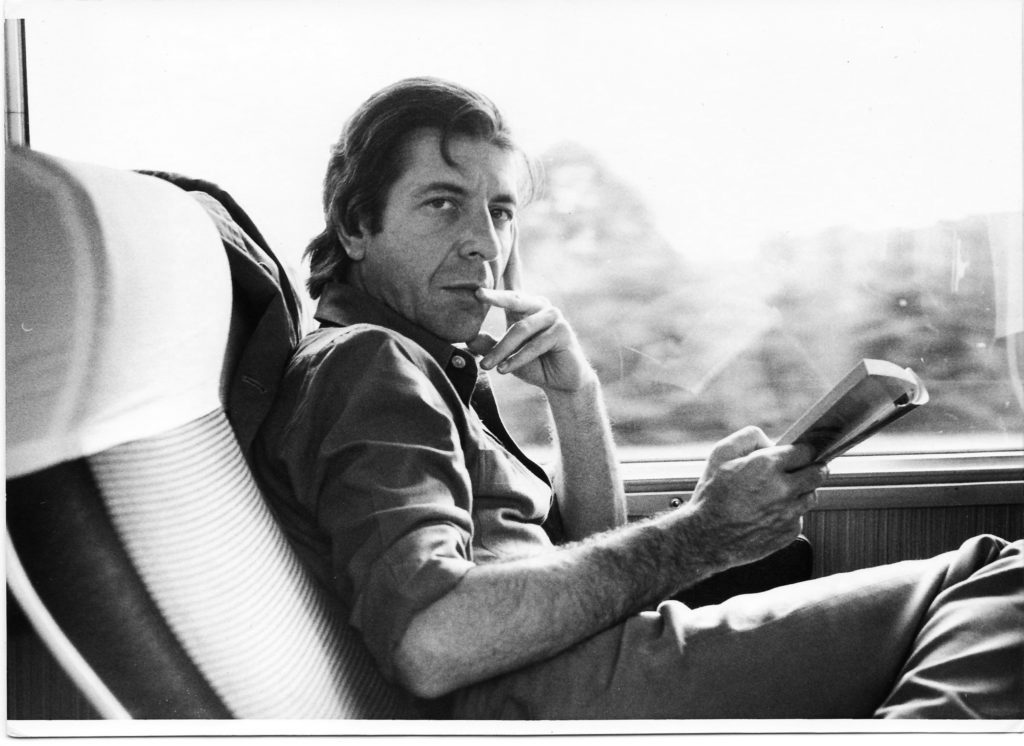 Leonard Cohen: A Crack in Everything, at the Jewish Museum, runs from April 12 to September 8. Museum galleries will be open during the Passover holiday and admission is free on April 20, 21, 26 & 27. For more information, visit www.thejewishmuseum.org.