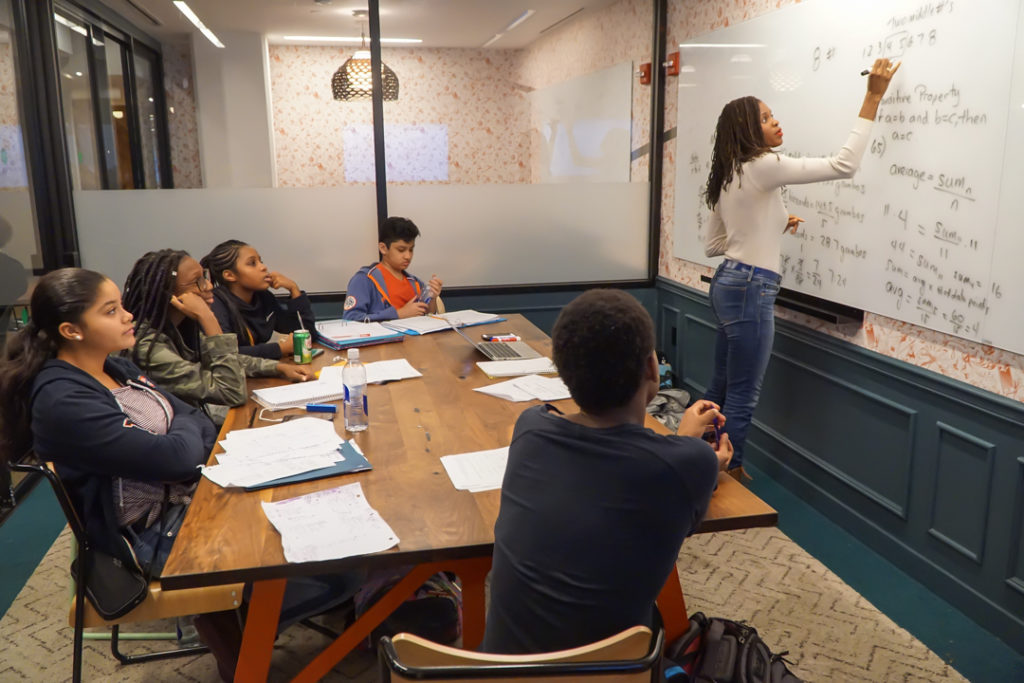 This spring, The New York Times found that specialized high schools in New York City had admitted a surprisingly small number of Black and Latinx students.

The story caused scrutiny over the segregation within New York City’s school system. Seventy percent of the city’s public schools are made up of Black and Latinx students, yet they constitute just 10% of the enrollment in specialized high schools. A new report by the NYU Furman Center, “The Diversity of New York City’s Neighborhoods and Schools,” affirms the disparity, noting that Black and Hispanic children remain more isolated by race and ethnicity than their white and Asian peers, and that within predominantly Black and Latinx schools, students scored highest on an index that measures the likelihood that they live in poverty.

The lack of resources extends to the classroom. Under the Bloomberg administration, the Department of Education closed nearly 60 gifted and talented programs, primarily in schools with majority Black and Latinx students. This drop is one of many potential reasons why Black and Hispanic enrollment to the city’s specialized schools has plummeted in recent years.

Tai Abrams saw the lack of programs for talented Black and Brown students, and it bothered her so much that she left her corporate job and started AdmissionSquad in 2016. Based out of Downtown Brooklyn, the nonprofit provides instruction, test prep and mentorship to high-achieving students of color. Students receive guidance from former program members and receive several hours of tutoring each week leading up to the specialized high school exam.

Abrams’ goal is to make sure that talented Black and Latinx students do not just get accepted into a competitive school, but that they thrive there through exposure to higher level academic material. Her model is working: 80 percent of students in the AdmissionSquad’s 2016 and 2017 cohorts were offered seats in at least one top city public high school. The 2018 cohort’s success rate is even higher, at 85 percent.

“It can be very lonely being the only one there,” Abrams said about the few Black and Latinx students in specialized schools. “Developmentally kids need to see other people like them. They take on inner norms and expectations people have about them, and then those kids think, ‘Is everyone else not good enough?’” 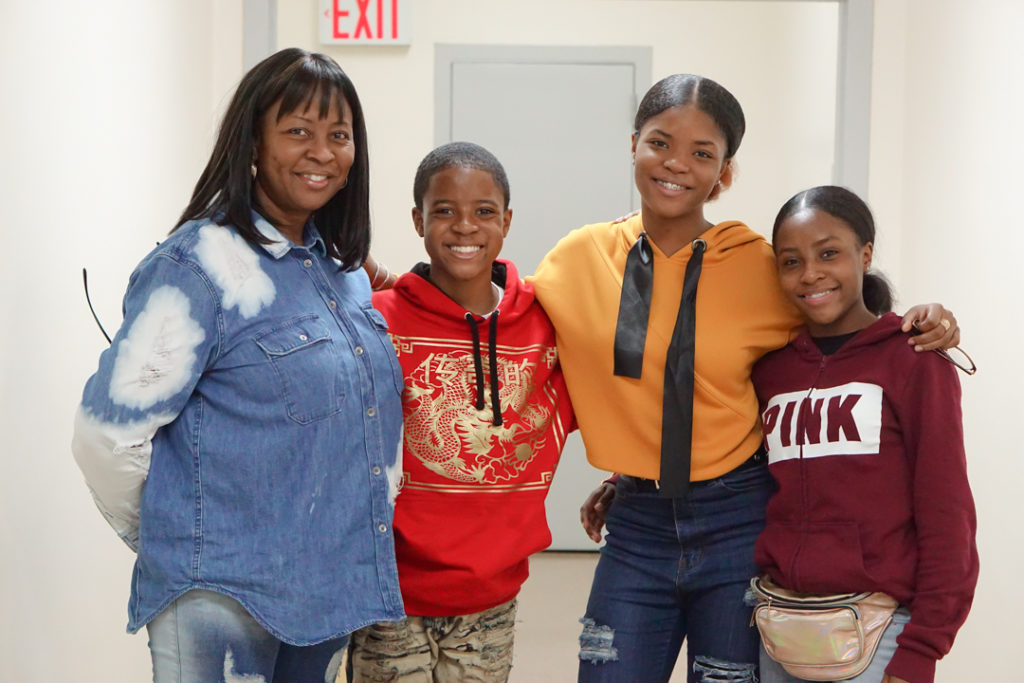 A family AdmissionSquad supported in 2017-2018. All three children, triplets, were admitted into selective high schools in 2018. Safina Davis, in the middle, was one of only 10 black students to gain admission into Stuyvesant High School. Her brother Ralph Davis placed into Brooklyn Latin and Semira Davis, on the right, placed into Beacon High School and Central Park East (she chose the latter). Photo: Nancy Fernandez

Abrams explains that many Black and Brown communities don’t have the same access to educational information networks that other communities do, and often rely on the word of teachers and counselors who may be overloaded.

“We’re trying to close the info gap with parents and schools at large across the city and make as many people as possible aware of what top schools are,” she said.

The more parents are involved and aware of how they can help their kids succeed academically, Abrams says, the more likely their children are to make it into specialized schools. They host parenting workshops, consult with parents about academics and what schools to put on the high school application list.

“Certain schools,” said Abrams, “do not share information about the city’s most competitive high school programs and oftentimes, make assumptions that the children would not be able to handle the workload.”

A 2016 report in The New York Times traces how schools underestimate the talents of Black and Latinx students, a form of discrimination that Abrams has experienced first-hand. As a middle school student at The Lenox Academy in Flatbush, a public school for gifted students, she and her peers received test prep from a volunteer parent for a math Regents test and did exceptionally well. Abrams got a 100. School officials demanded that they retake the exam.

“They thought we cheated,” she told the New York Post. Ultimately, she graduated as Valedictorian of her class and was accepted into the Bronx High School of Science, which accepted just 12 Black students out of 803 this year.

Much of Abrams’ outreach is currently in Central Brooklyn, Harlem, and a few places in the Bronx. She tries to target underperforming schools that she feels would benefit the most from what she has to offer, and she provides as much support to parents as she does to her students. The pricing is more reasonable than typical test prep companies. Specialized school exam courses at top prep chain Kaplan, for instance, start at $1,000 for 27 hours of coaching, while AdmissionSquad’s summer program includes over 100 hours of teaching, for $1250. Knowing financial constraints can hold back some families, Abrams also considers people on a sliding scale and does her best to make information accessible. By looking at a family’s income and how many people are dependent on that income, AdmissionSquad can calculate a 25 percent discount, a 50 percent discount, or more.

“At the end of the day, it’s a community of support, it’s like we’re telling them ‘We’re rooting for you’,” said Abrams. 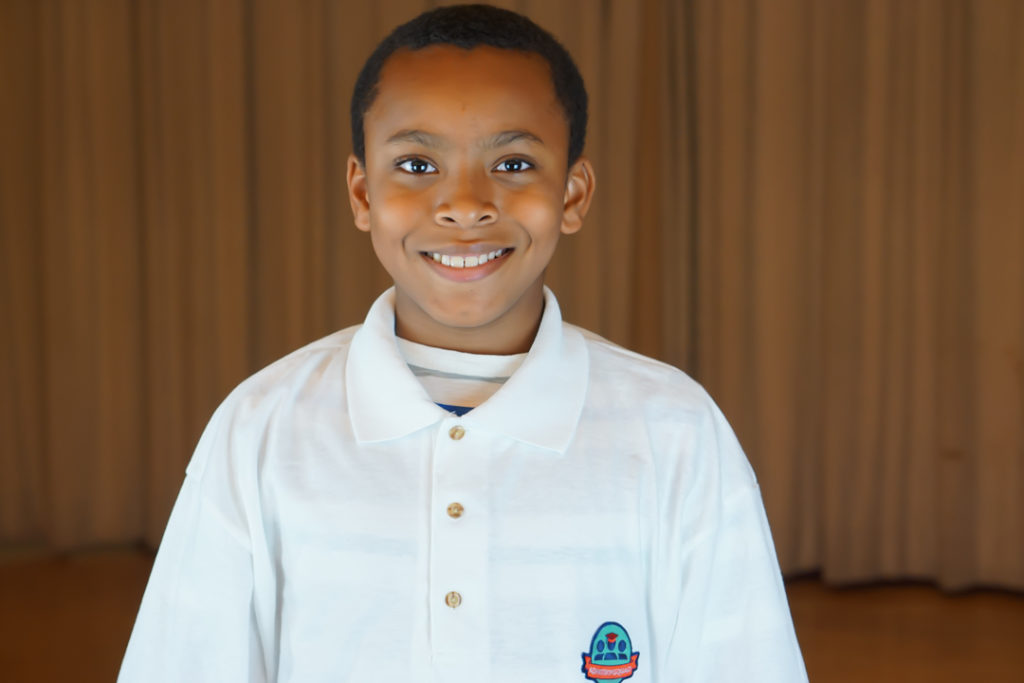 AdmissionSquad student Ethan Henry started with the program in the middle of 5th grade. He graduated from elementary school as one of the top math students in District 18 and is now at Scholars Academy, a highly selective 6-12 school, as a result of their admissions coaching. Photo: Nancy Fernandez

Going beyond straight As

As an alum of both Bronx High School of Science and Duke University, Abrams knows what a supportive environment can do for a child’s education. She credits her education for her success and has used what she learned as a student to put together the curriculum for AdmissionSquad students.

“We have a Singapore based approach—it’s getting [students] a grade level or two ahead,” she said. “Parents think it’s about getting 95s in school, but it’s really about going above and beyond getting those good grades.”

Getting motivated and talented students ahead of grade level includes several months of test prep and lessons that begins in January and ends in October right before the specialized high school exams in mid-October. Some lessons are held at the Downtown Brooklyn headquarters, others at satellite schools.

During the school year, students get a little bit over four hours of instruction a week, half focused on math and the other on English language arts. The lessons are Common Core-aligned and mirror what might appear on the upcoming exam.

“It’s not just answering questions, or just exam review, it’s actual structured lessons with formal teachers…and then in the midst of that we cover test prep strategy,” said Abrams.

Throughout, students are exposed to tougher subject matter than they would be in their regular classrooms and practice taking the entrance test so that they feel as prepared as possible when they take the official exam. Abrams says that the students are also taught about networking and how to find opportunities.

Alexa Whyte, an AdmissionSquad alum from Flatbush, is currently a student at Brooklyn Tech. She signed up for the test prep program after Abrams went to her school and spoke about the program. At first Whyte didn’t think she’d get individualized attention, especially after she had a low score on her assessment exam.

“The program really meets you in the middle and understands the positions people are coming from and helps you build up from there,” she said by email.

Whyte said that the program didn’t just focus on test prep, and she liked that Abrams structured everything to have a holistic approach to success in any school and in any setting. Students learned how to network, how to write a resume, and how to be professional.

“Because of my networking skills I learned from AdmissionSquad, I managed to organize a panel with Harvard graduates because I learned how to network and follow up with people,” she said.

Now, Whyte volunteers at AdmissionSquad as a student mentor for middle school students. She loves her high school and appreciates the new cultures that she’s been exposed to, but she admits that there aren’t a lot of Black or Brown students at her school. She wants her mentorship and experience to help other students of color thrive in challenging environments.

“We need to get more Black and Brown youth in specialized high schools to create more of an environment that is not only reflective of the diverse nature of New York City students, but also places people of different backgrounds in the same room,” she said.

Abrams wants everyone to understand that diversifying specialized schools and giving more Black and Latinx kids access to a decent education isn’t just good for communities of colors, it’s good for the schools themselves and future employers.

“When we talk about building the country and an innovation economy, it’s going to need dynamic, multi-dimensional teams. Diverse teams are the most innovative,” she said. “Having only one perspective on how the world is impacted is a missed opportunity.”