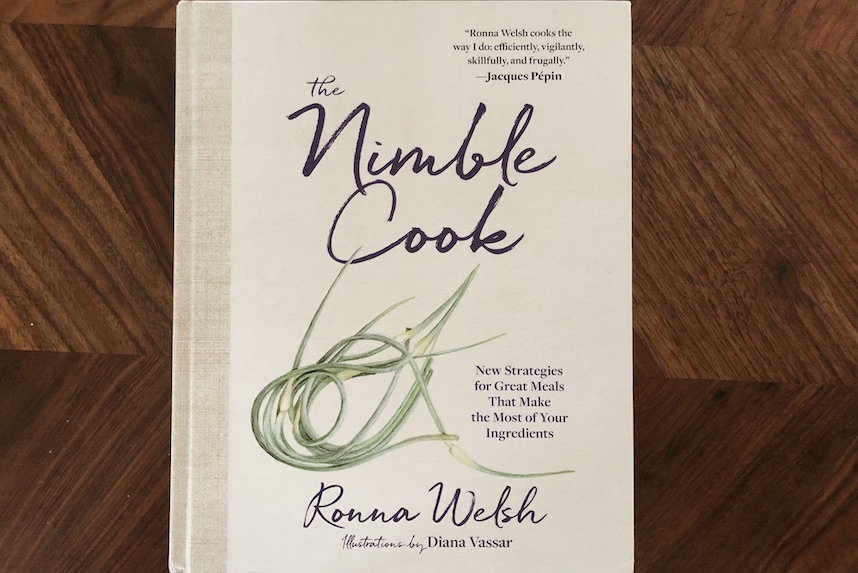 Every once in a while, a cookbook comes around that changes the way you think about cooking. The Nimble Cook: New Strategies for Great Meals That Make the Most of Your Ingredients by Brooklyn chef and Purple Kale Kitchenworks founder Ronna Welsh is this kind of book. Her style of cooking is reminiscent of Alice Waters in its emphasis upon considering the best possible ingredients first and then building a meal around them. But when it comes to process, Welsh is like the Elizabeth Warren of the culinary arts. Just as Warren has laid out her policies so that one neatly reinforces and pays for the other, Welsh offers first a basic recipe (what she calls a “starting point”) followed by her variations, or “explorations” to try. It’s a very nerdy cookbook, in other words, in which Welsh provides a plan for nearly every vegetable, herb, protein and condiment in your kitchen.

Always throwing away half-bunches of herbs? Welsh has a plan for that, in the form of a Many-Herb salad. Not sure what to do with the green ends of leeks besides maybe saving them in the freezer for that stock you will never actually make? Welsh has a plan for that too, in the form of dill-and-leek-greens pesto or creamed leek greens. What on earth would you do with rhubarb if you don’t bake pies? Make a compote, add it to lemonade or put it in sangria! Reducing food waste, an issue we’ve covered previously, isn’t Welsh’s main preoccupation, but it’s certainly a side benefit of her cooking style and methods. And as we head into summer, the season when home cooks and CSA members practically drown in endless, gorgeous produce, it’s a like a manual for what to do with all that veg. In the course of reviewing her cookbook, I became innately aware of all that I was throwing away and that with a little effort, I could make my ingredients go further. On a whim, I saved the stalks of a fennel bulb I’d sliced for a salad, believing she would surely have some use for that, perhaps as a pickle. (She provides pickle recipes for everything, from watermelon rinds to parsley. That’s right, parsley—told you this was a nerdy cookbook.) And lo and behold, she provided a second life for those stalks and fronds, as a fennel simple syrup I could use in a gin cocktail or lemonade.

Nothing is terribly complicated about her cooking, and there are very few ingredients that I could not find (green peppercorns in brine is the one I have just about given up on, and I was lucky to have cardamom pods as she flavors more things with this traditional Indian spice than you would ever think to do on your own). The only sacrifice she asks one to make in the kitchen is foresight and time. The building blocks she recommends—making an herb-infused butter, for instance, or pickling parsley—can feel like an investment without an immediate payoff, like spending $10,000 to repair a leaky roof instead of splurging on a room full of furniture. But everything depends, ultimately, upon the roof! And really, the time investment isn’t nearly that costly or boring. I spent 30 minutes making her tomato confit, using cherry tomatoes, thyme, lemon rind, salt and “excellent olive oil” — a constant refrain in every recipe, which she defines as a 750 ml bottle in the $16-$20 range, whose origin can be traced to a single region, say in Italy or Spain, preferably from a small agricultural collective or grower. That confit, superior olive oil and all, was mind-blowingly good, but what was even more incredible was the addition of lime, lemongrass, jalapeno and cilantro to said confit, over seared scallops, which she detailed in one of her variations. This is Welsh at her best. In the course of two basic recipes, I learned new skills (a simple confit and achieving a perfect sear), had a great meal and had confit to spare for a single pasta lunch the next day. Welsh often constructs recipes for one, knowing full well that this is the way many of us eat. Even families find it hard to sit down together, and often you need to cook just one lunch or dinner. Having one of Welsh’s “starting points” on hand makes it possible to eat like a queen when you do.

The book itself is beautiful, with dreamy illustrations by Diana Vassar, and the recipes are iron-clad. It feels as though they were all well-tested and edited, a painstaking process that too many cookbooks skip. Sometimes I felt Welsh’s choice of seasonings were too subtle—that a base recipe like the braised lamb shanks really needed its variations (atop flatbread, for instance, with cumin, lime and yogurt) to shine as a standalone dish. But I could simply tinker to my taste, and in truth, I’ve only worked through a fraction of the book. Its overall message is far more important ultimately: Be methodical so that you can be versatile. It’s the same lesson, more or less, that I learned in the cooking class I took with Welsh in her apartment years ago, before she opened her cooking school, Purple Kale Kitchenworks, in Industry City. The theme was “Secrets of a Well-Stocked Fridge,” and it boiled down to a very simple practice: Take the time, say on a Sunday, to prep the foods you will eat all week long. I do this when I can, and don’t feel bad when I don’t. Life is short and you can’t cook everything from scratch with a mise en place straight out of a professional kitchen. But when the opportunity presents itself, it is worth spending time with The Nimble Cook. You’ll become one, I assure you.