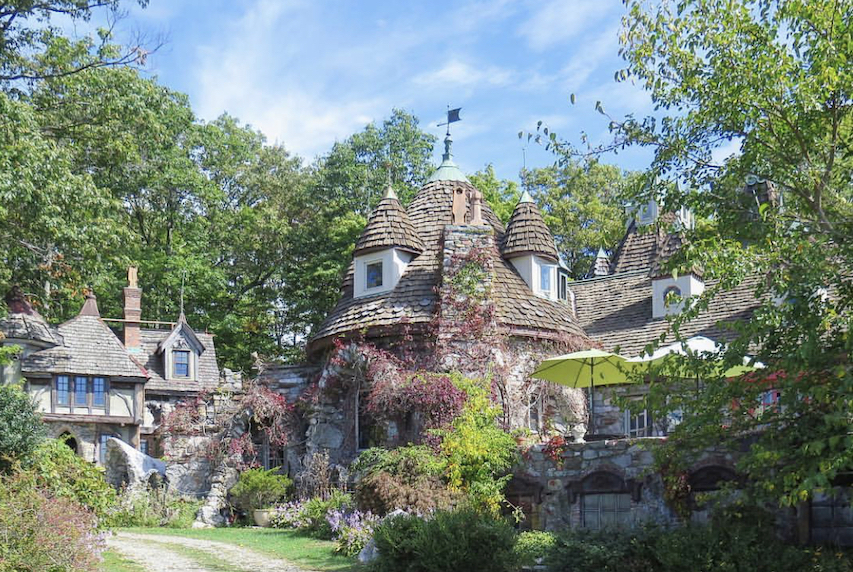 Wing’s Castle is a labor of love, built by hand from mostly salvaged materials by the late Peter Wing and his wife, Toni, who is now a widow.  Photo: James Hogarty

We can’t find the entrance to the castle. We try an ancient red door strewn with chains at the base of a crumbling tower, but it’s bolted. I feel like Snow White locked out. Like a fairy tale exists the other side of these walls, if I could just get in. My partner and I have come to visit Wing’s Castle, a bed and breakfast outside the quiet village of Millbrook, NY. Approaching from the road, it looks every bit a tumbledown medieval castle, replete with turrets, stained glass windows, a moat, and cracks in the walls. But when you look a little closer it reveals itself to be something more esoteric, a madcap fusion of architectural styles, a Gaudí homage inside a Tim Burton dreamscape.

There are five rooms available for guests, including rooms in the tower and the dungeon, but the original part of the castle is the three-bedroom home Toni Wing shared with her late husband and the beloved local artist Peter Wing. They spent 47 years building this castle from mostly salvaged materials and love, a piece of work which spanned their lifetimes, a live-in art project which grew up around them and their children. 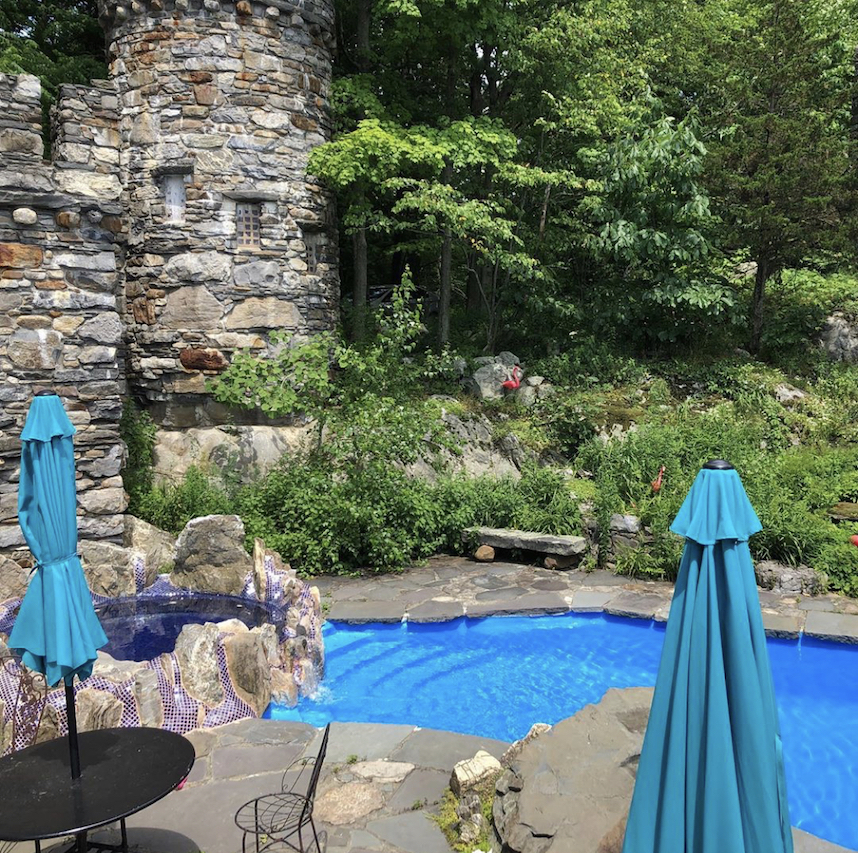 You can take a tour of Wing’s or stay the night in the castle, where there is a moat and a beautiful pool and hot tub. Photo: Michele Zdunek

We first spot Toni showing a family to their rooms. They’re walking along a stone parapet, their faces glowing with wonderment. Toni tells us to explore while we wait for her to finish. We find an entry point at a Buddhist temple. From there we follow a labyrinthine corridor lined with sculptures in the stone, up a spiral staircase to a viewpoint over the rest of the castle and the fields of the Hudson Valley. As we emerge it feels like we’ve passed from the real world with its rules and straight lines into another in which anything might happen, in which buildings are purposefully built wonky and dragons emerge from the walls. 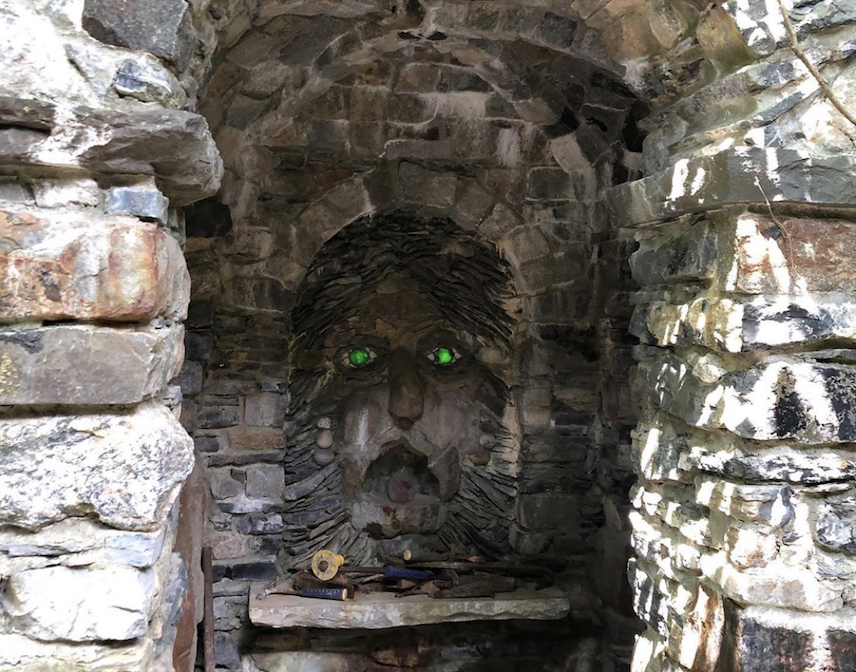 Toni shouts for us, and we follow her on a tour starting outside at the sacrificial slab. “We have picnics out here,” she says, before we move on. As we walk she tells us the story of the castle. In 1969, her then-boyfriend Peter brought her to this piece of empty land, described his vision for their future home and then proposed. She said yes, and they broke ground the following year. They didn’t have architectural plans; just a vision. They slept in the “dungeon” for three years, as they built, using the sketches Peter drew as guidance. “I’d mix the mud and did the grunt work,” Toni explains, “and he’d come out [to show me a sketch], and go, ‘This is what we’re doing today,’ and I’d go, ‘okay,’ and by the end of the day it’d look just like that. He really had that mentality and ability.”

My partner, Adam, and I drove the two hours here from Brooklyn. We’re staying nearby in Millbrook and after discovering Wing’s Castle online I booked us in for a tour. Toni offers 45-minute tours, by appointment only, for $12 throughout summer. Adam and I, like so many others, share daydreams of buying land and building a home we design together. He has the skills. Perhaps I offer the audacity to believe it might be possible, and listening to Toni speak it feels that way. Adam and I exchange looks of recognition, both inspired by standing within proximity of someone who has made a daydream you share into reality.

“We were two 23-year-old kids with no money and we still have no money, but we put it here,” Toni says, indicating at the building around her—still ongoing. She’s told this story on many tours, but she still glows when she talks about her and Peter’s life together. Necessity made them early adopters of sustainable principles, with 80 percent of the materials salvaged from old barns and fire sales. They scoured the local dump together. “For us it was a treasure hunt. People are constantly discarding such wonderful precious stuff,” Toni says, now a physical therapist, but she once ran an antique store, too. They had always intended to go traveling, but never got round to it. “It all went so fast,” she adds, sadly. It takes sacrifice too, sacrifice of the other lives you could be living. 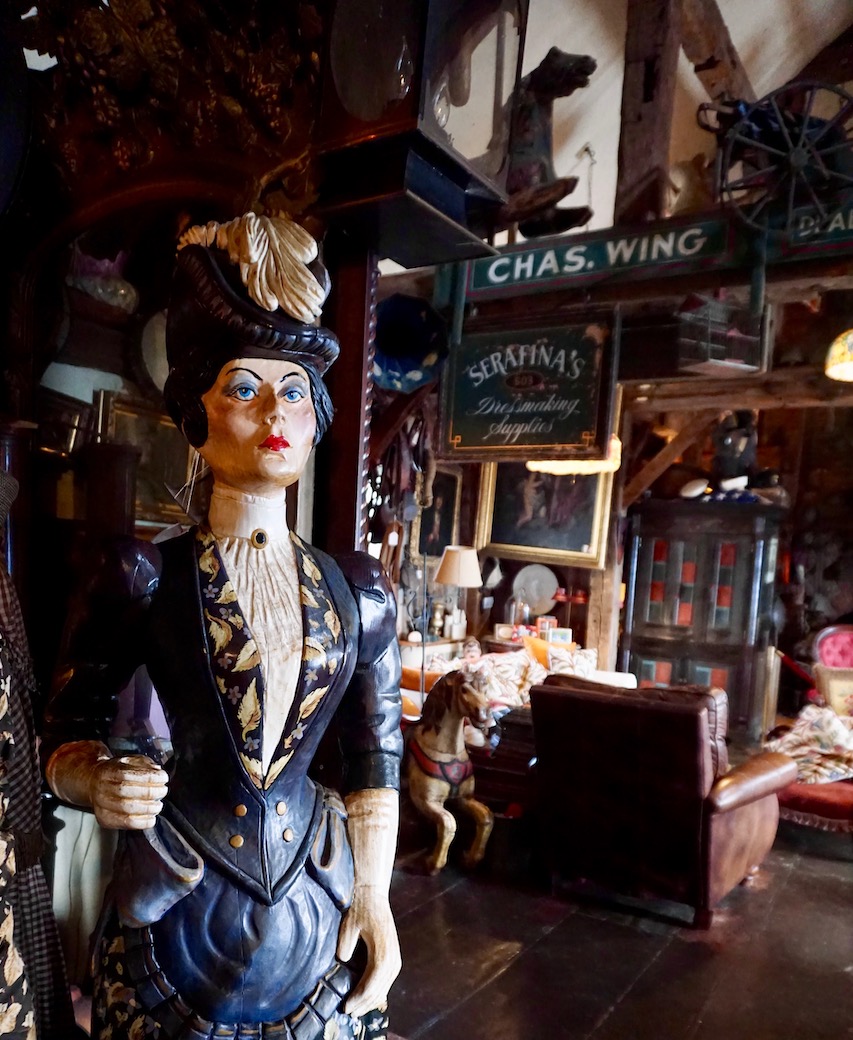 The interior of Wing’s is an eclectic mix of antique treasures. Photo: Tyler Wetherall

We walk into the main room of the castle, and take a breath. It’s a 24‐by‐40‐foot room with giant wooden rafters, between which a carousel horse dances. Civil War regalia, vintage shop signs, Tiffany’s lamps, oil paintings, swords, travel trunks, tapestries, and what appears to be the hull of a ship emerging from the ceiling but is in fact the remnants of a Victorian porch. The Jurassic Park theme tune is playing in the background, as if it all wasn’t epic enough. “This is an art project, which you can’t take to any other place – people have to come to it,” Toni says, and they do. Each of the five guest rooms is unique, though they all have rustic castle furnishings— lots of wood, gothic windows, and unusual details, like a suit of armor standing in the corridor.

Wing’s Castle sits on Peter’s ancestral land. The Wing family go back to 1632, their roots stretching further than the nearby hamlet of Wingdale. Peter had loved this corner of his family farm since he was a boy, and it was given to him after he returned from the Vietnam War. Later I find a documentary about Wing’s Castle made in 2011. I see Peter in action on the property, mixing cement or driving his digger (its teeth painted with a face in homage to the Polynesian belief that it would ward off evil spirits). He goes into further detail about his experience in Vietnam: “After seeing 63 shipmates get killed and getting home at the age of 21, I made the decision never to listen to anyone ever again, and I think the building sprang from that attitude of me running away from society.” He comes across as an iconoclast of a brilliant order, one who also isn’t a cynic. A non-conformist, an artist. We end up in Amenia later in the week and see one of Peter’s murals. His work is dotted throughout the area, his legacy.

Toni takes us to the last part of the castle Peter built before he died in 2014, a flight of stairs leading to a further guest rooms. He was operating a 1936 Morgan Supersport 3-wheeled vehicle when he crashed. Afterwards his son came home to complete the work and now a mosaic of angels decorates the walls of the stairwell in which he last stood. 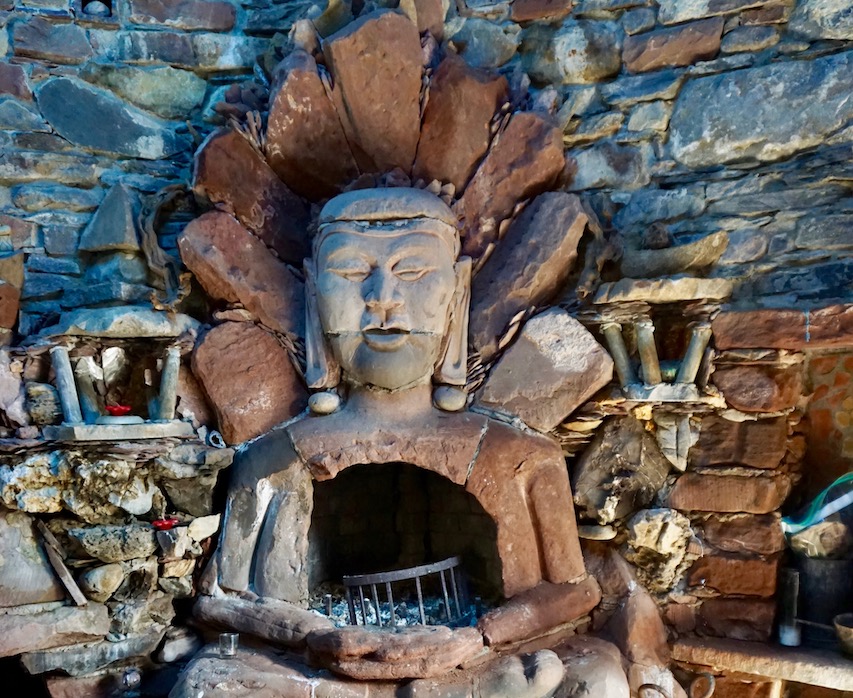 As intricate and detailed as Wing’s Castle is, its architect Peter Wing seemed guided by the Buddhist principle of non-attachment. Photo: Tyler Wetherall

I ask Toni whether the stone circle outside or the Buddhist temple were part of Peter’s spirituality. She said they never really talked about what it meant, which surprises me at first, but later in that same documentary, Peter says: “For Toni and I to have built the castle is meaningless […] All this is meaningless except for the experience of being alive.” And perhaps that’s it. Maybe we just need something to do with this short moment we call life, something to work toward together. To see the labor of our days translated into beauty, and if that beauty grows around us, all the better. A project like this offers the same slow pleasure of gardening, but what grows is a home, a piece of living art. The architecture is undoubtedly enchanting, but the inspiration is from more than that; it’s from the dedication, from the 47 years for a dream, for a drawing, for love.

Rooms at Wing’s Castle start at $200 per night, including breakfast. Tours are offered from June 1st to Labor Day by appointment for $12.