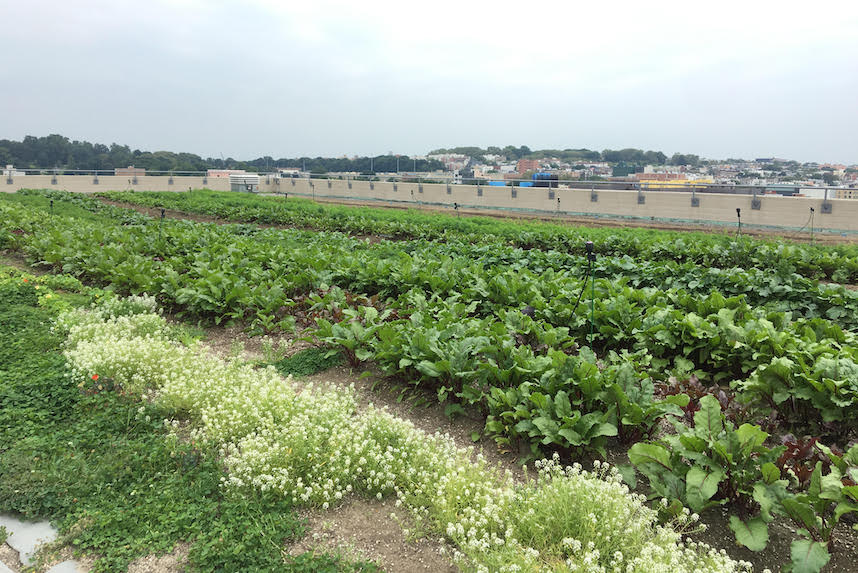 A worker drags a plow over freshly harvested earth. On this muggy August day, it looks laborious. This isn’t a small farmstead in some bucolic locale; it’s a rooftop in Sunset Park. The lack of mechanization is one of the realities of rooftop farming, part of an urban farm movement that has spread across acres of New York City real estate, the largest of which officially launched last week with Brooklyn Grange’s third location in Sunset Park.

Atop the historic Liberty View building, the newest parcel spans nearly 1.3 acres of farmable area, which can produce approximately 30,000 lbs. of vegetables per year. These will be ferried out to surrounding restaurants and Brooklyn Grange’s weekend farm stand at the Sunset Park Greenmarket, and supply their 100 CSA members. There’s a 5,000-square-foot greenhouse – home to the microgreens and hydroponic program—and a soon-to-come 6,000-square-foot events space.

When I visit, plump purple eggplants hang ready to be harvested, the heirloom tomatoes ripen in the heat, and the mint is in flower, attracting Monarch butterflies and blue-winged wasps. The view looks over the former factories that once dominated this waterfront, and I can see the Statue of Liberty across the harbor. Amidst the concrete and noise of urban life, the overpasses and screeching subway brakes, it’s easy to forget the meditative power of greenery.

Urban farming is often grouped with other hip, cosmopolitan markers of gentrification, like the explosion of the wellness industrial complex or stores that sell only artisanal coffee and succulents. But this would be to belittle a movement that has flourished in the past ten years, and occupies an interesting juncture between efforts to make our cities more sustainable and those to improve citywide access to nutritious food.

The first Brooklyn Grange opened in 2010 in Long Island City, and while rooftop farms existed, it was the most ambitious to date. The mission of its founders, Ben Flanner, Anastasia Plakias, and Gwen Schantz, was to create a fiscally sustainable model for urban agriculture and provide healthy fruit and vegetables to their local community. Back then, they sold to just a handful of restaurants, with Flanner using his biodiesel Sedan to do deliveries. It would bottom out on every bump and frequently break down. These days, with rooftop farms now in LIC, the Brooklyn Navy Yard, and Sunset Park, Brooklyn Grange operates the largest rooftop soil farms in the world (as opposed to greenhouse rooftop farms or this “aeroponic” one coming to Paris). It sends out vans twice weekly to over 40 restaurants—none of the food travels more than 5 miles—and produces an annual total of 80,000 lbs of organically-grown vegetables and hundreds of pounds of New York City honey from their 20 hives.

Urban agriculture has since become part of the effort to re-envision the city as a place where we can grow food, and thereby increase the food security of the three million New Yorkers currently living in areas categorized as food deserts. While prices at farmers’ markets are often prohibitively high and eating organic is associated with privilege, Brooklyn Grange’s farm stands accept coupons from nutritional programs aimed at providing fresh produce to lower income families. They also tailor their produce dependent on local food needs. “It was important to grow food that was relevant to the Sunset Park community,” says farm manager, Shannon Lai, who trained to be a farmer at the Youth Farm in Crown Heights. With Brooklyn’s Chinatown nearby, this translated to seven or eight varieties of bok choy and heirloom eggplant, amongst other vegetables and herbs. “It’s been really personally fulfilling being on the ground one day a week connecting with the community.”

Part of that community outreach is education. Non-profit City Growers—an organization Plakias refers to as a “critical piece of this puzzle”—hosts educational field trips, after school programs, and summer camp sessions at Brooklyn Grange’s farms for young people to learn about how food grows and what they put in their body. 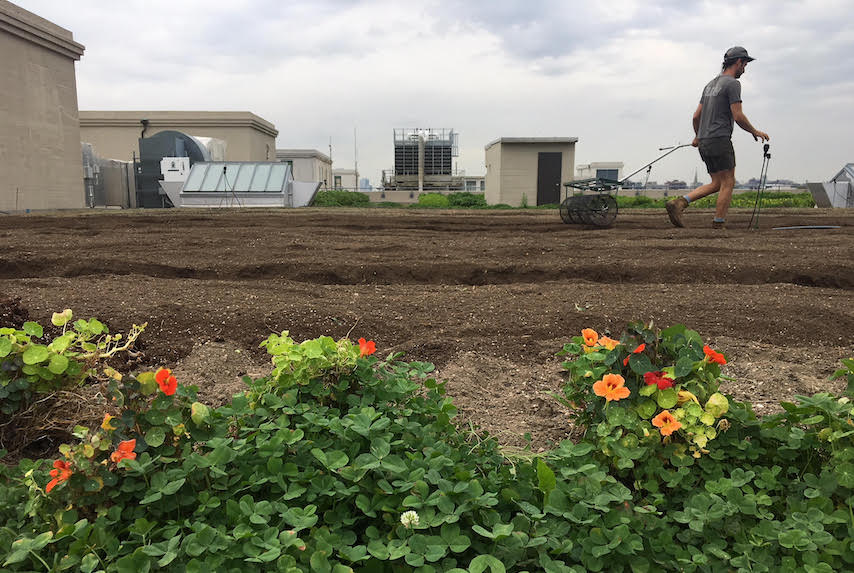 Feeding New York entirely through urban farming is unrealistic, though, even according to Brooklyn Grange co-founder Plakias. “Farming on even a roof of our scale is not as efficient as farming at ground level in a rural area where land is less expensive and you can enjoy efficiencies like mechanization, but because there are so many benefits to what we’re doing we continue to seek out rooftops to grow.”

Developing green infrastructure such as urban farms, a type of green roof, is among these benefits. Green roofs are remarkably effective at retaining stormwater, lowering the risk of flooding and sewer discharge. They reduce a building’s energy costs by absorbing heat and providing natural insulation. This, in turn, counters the Urban Heat Island Effect, which we have all experienced so brutally this summer. The plants also reduce carbon dioxide and attract important pollinators and birds, supporting the natural ecosystem of the city.

Soaking up the city’s stormwater 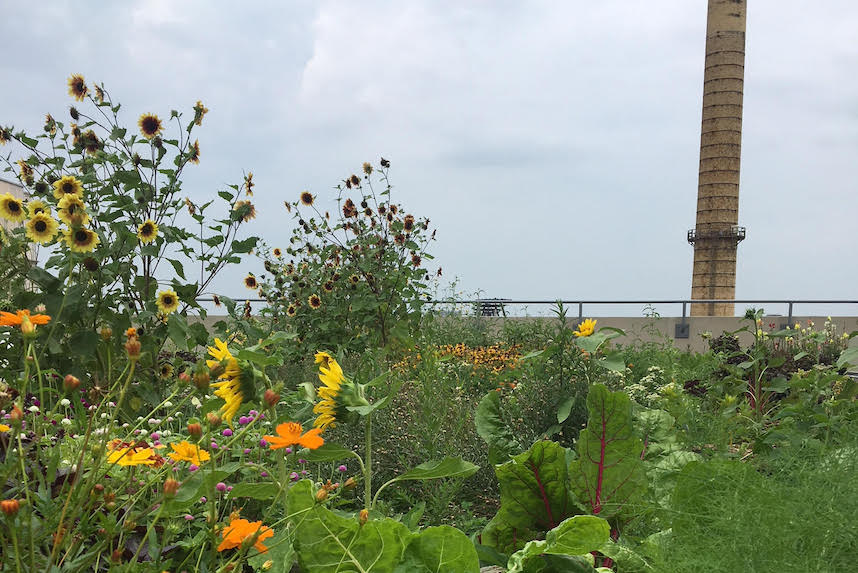 As a company, Brooklyn Grange has become a leader in green roof technology and part of a broader citywide shift in policy. Its Sunset Park farm, for instance, was awarded a $1.38 million NYC Department of Environmental Protection (DEP) Green Infrastructure Grant towards its design and installation. The eight-year-old program rewards innovators like Brooklyn Grange, whose Sunset Park farm can manage more than 175,000 gallons of stormwater in a single rainfall, in part because Flanner helped develop a compost-based soil that retains more water. They also installed bluestone pathways capable of storing 10,000 gallons at a time, a feature that evolved out of lessons learned from the previous farms—lessons that will be needed if the future development of New York is to be sustainable.

“The inescapable reality of climate change has certainly helped make a strong case for the necessity of green infrastructure,” Plakias said. “As a native New Yorker, I don’t think it’s realistic to stem development, but we can do it better.”

Brooklyn Grange also offers design and consultancy services for clients looking to create green infrastructure across the tri-state area, expertise that will likely be in high demand thanks to ambitious new plans passed at city and state levels to eliminate greenhouse gas emissions by 2050. Buildings, especially residential ones, produce two-thirds of the city’s planet-warming pollution, according to a 2017 inventory by the Mayor’s Office of Sustainability. But under the Climate Mobilization Act passed in April, New York housing is going to be radically reimagined with green infrastructure as its driving force, including stringent guidelines for any building over 25,000 square feet and high penalties for noncompliance, as well as requirements for some buildings to have green roofs. 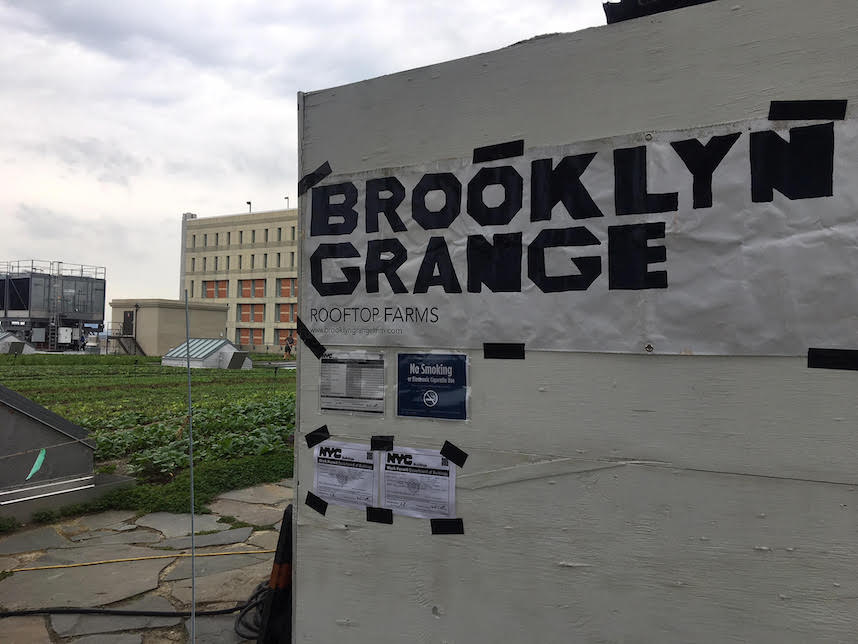 There are 60 acres of green roofs in the city, a number that will continue to grow as developers and landlords adopt strict new environmental standards, some of which will require stormwater-catching green roofs atop buildings. Photo: Tyler Wetherall

Government incentives like the DEP grants and the Climate Mobilization Act’s raft of loans and subsidies pave the way for Brooklyn Grange’s further expansion around the city, in addition to other green roof companies like Brooklyn Greenroof and Plant Specialists. And at Sunset Park’s groundbreaking ceremony last week, Brooklyn Borough President Eric Adams suggested a prime candidate for the greening of New York’s rooftops: the city’s vast network of public housing developments.

“There’s no reason why we can’t have Brooklyn Grange on top of every NYCHA building [New York City Housing Authority] so they can grow their own food and live a healthy lifestyle,” Adams said in a passionate speech at the launch event. “This is the vision. We can’t create land. But we can utilize our rooftops.”

There are 40,000 total acres of rooftop space in New York. Currently, 60 of these acres, some 1200 buildings, are covered by green roofs. I asked Plakias if Adams’ vision of green rooftops across the city was realistic. “It’s absolutely possible,” she told me. “These should not be amenities for upper income; we should be building these wherever we can.”

Some critics have argued that green roofs and urban agriculture is simply “greenwashing” the problem of the wastefulness and conspicuous consumption necessitated by urban living, rather than pushing people to look at the deeper causes of our current environmental plight. But Plakias sees it as just one step in a much bigger struggle. “At the end of the day, we want a panacea, but that’s not possible. We still need to support our rural farmers and still need to take steps in our daily lives to reduce our environmental impact,” she says. “Even if we were to cover every rooftop in some green infrastructure, we’re living in a hotter climate and a changing climate, and we have work to do.”