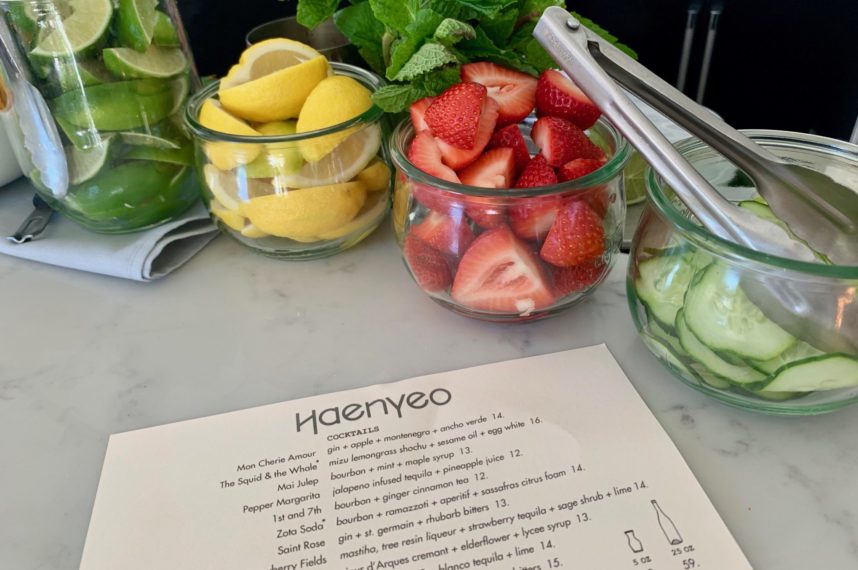 From the moment Haenyeo opened in late 2018, visitors have been raving about chef Jenny Kwak’s ridiculously delicious Korean spins on international comfort foods, like bubbling rice cake fundido and gochuchang-infused bouillabaisse. We’ll happily join in that chorus, but first, can we talk about the drinks? 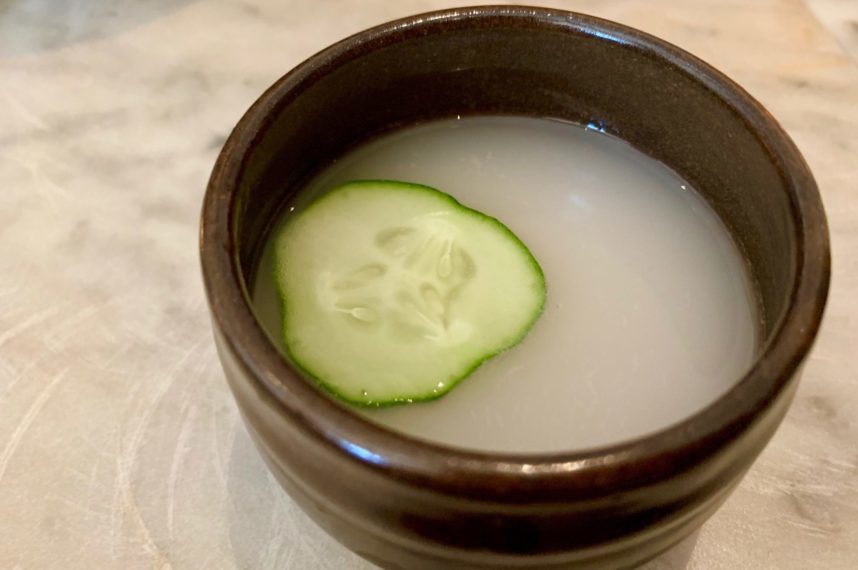 Makkoli, a kind of Korean moonshine, is thought to have medicinal properties. Photo: Kara Zuaro

In the front room of this sun-drenched corner spot on Park Slope’s 5th Avenue, the bar is decked out with ripe berries, citrus, and mint, ready to dress a line-up of fresh signature cocktails. But our server’s face lit up when we asked about a small section of the menu titled “Asian Spirits,” featuring soju, shochu, and makkoli. We’d tried Korean soju and Japanese shochu before, but makkoli (sometimes spelled “makgeolli”) was new to our table.

This milky rice wine has ancient origins, dating back to the 10th century, and according to our server, it’s often thought of as an old hillbilly drink in Korea, but it seems to be gaining popularity again. At Haenyeo, it’s served in a dark ceramic mug to offset its cloudy white color, topped with a cucumber slice. A bit like nigori sake, makkoli is unfiltered and has a soft, slightly sweet bite, as well as some healthy properties. It has lower alcohol content than wine or soju, and contains lactic acid, good bacteria (like the kind found in yogurt), amino acids, vitamins, and fiber. Some sources claim that makkoli speeds up your metabolism, alleviates fatigue, and even boosts your complexion, but we were mostly interested in how well it paired with the crispy, spicy yang-yum chicken wings. 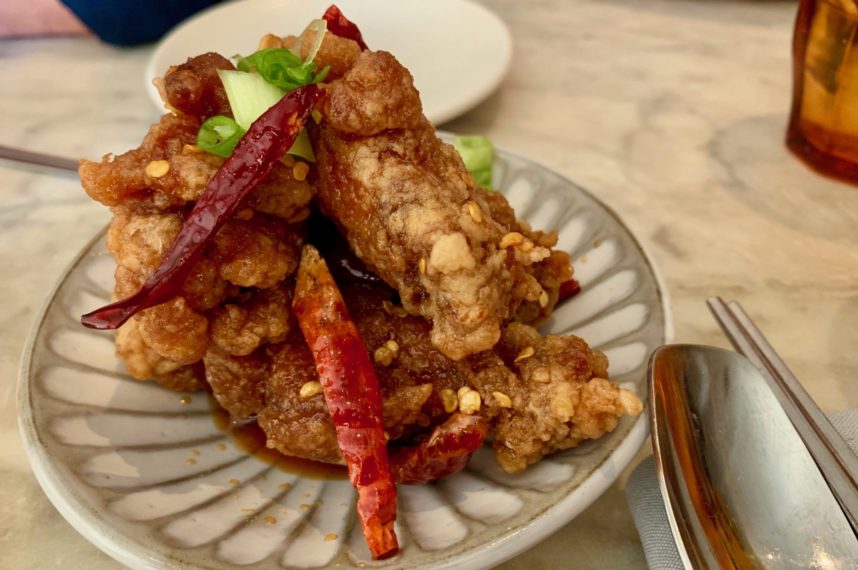 Korean chicken wings are all over the city these days, and Chef Jenny Kwak is partly responsible for that. She has been running Korean restaurants since the early 90’s, and at her first two kitchens, Dok Suni’s and DoHwa in Manhattan, she shared the cooking duties with her mother. Haenyeo is named for the tough, remarkable women who dive for seafood off of Korea’s Jeju Island, while holding their breath for as long as 3 minutes and diving 30 to 40 feet into the depths of the ocean.

Photographs of Korean women in wetsuits hang on the walls, and the menu is rich with seafood dishes that pay fair tribute to their incredible undersea journeys. In a hot stone bowl of bibimbap, the traditional warm, crunchy-edged rice is topped with creamy sea urchin, fresh raw tuna, spicy cod roe, ribbons of salad greens, thin strips of carrot, cucumber, and seaweed, and the salty orange orbs of salmon eggs. Haenyeo’s boulliabaise is a celebration of seafood like the classic French soup, but a dose of gochuchang chile powder and the addition of glutinous rice cakes makes the steamy bowl decidedly Korean. Plus, a baguette smeared with seaweed butter replaces the traditional croutons with rouille. 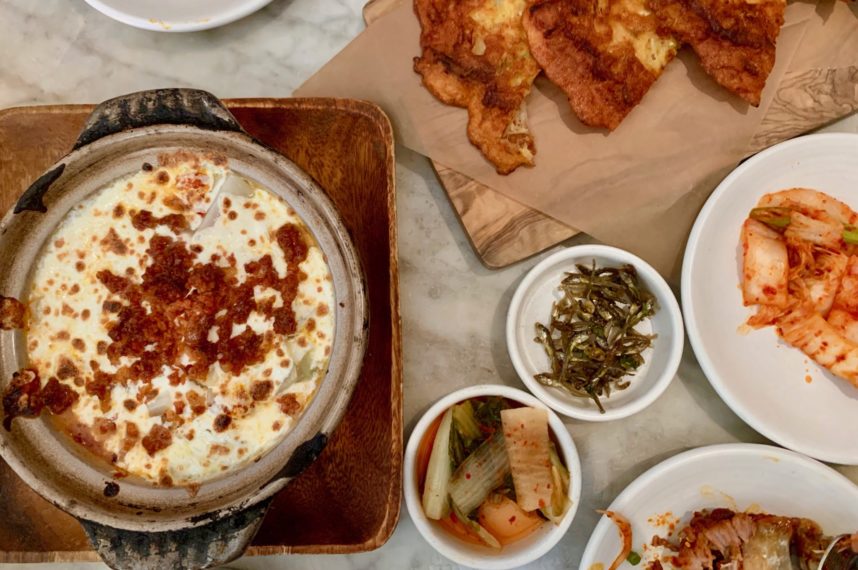 The chewy, oblong rice cakes also find their way into a bowl of fundido, where they’re topped with a thick, bubbling, browned layer of Oaxan cheese, chile sauce, and crumbled chorizo. It’s a cardiologist’s nightmare, a stoner’s delight. Our server recommended pairing it with the mungbean pancake, which could be dipped right into the cheesy goodness, and this was the most brilliant advice of the night. 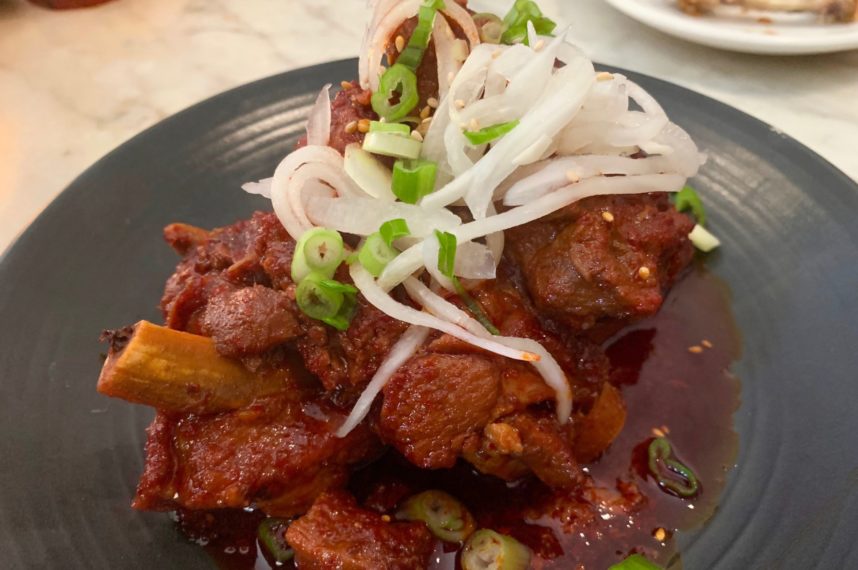 And if you need a little meat in addition to all the wings, cheese, and seafood, it can’t hurt to get a small plate of pork ribs, so tender they fall off the bone. For dessert, the not-at-all-Korean beignets, served in a snowstorm of powdered sugar, make a fine finish and give a nod to Chef Kwak’s business partner and husband, who hails from New Orleans.

Haenyeo is located at 239 5th Avenue (at Carroll Street), Park Slope; 718-213-2290. Reservations are available on Resy and strongly recommended, though some tables are set aside for walk-ins.