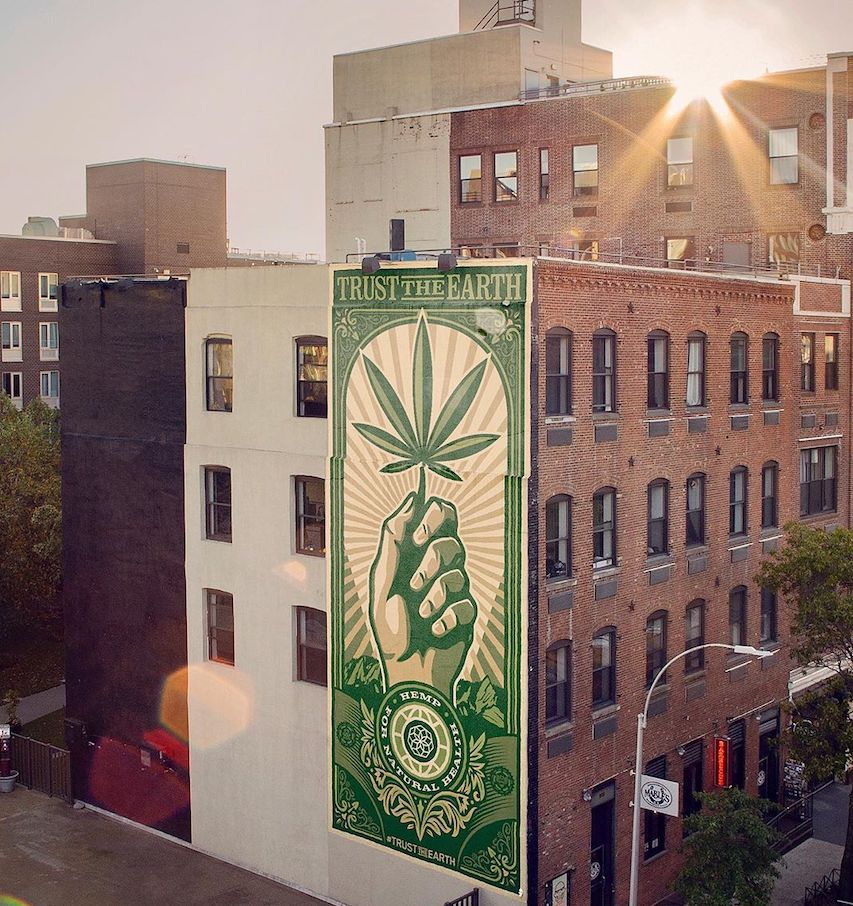 The Stanley Brothers and Shepard Fairey’s creative studio Studio Number One collaborated on a mural, “Trust the Earth,” to help spread awareness of the health benefits of hemp. Photo: Charlotte’s Web

Last week, the Stanley brothers, creators of the biggest CBD brand in the U.S., Charlotte’s Web, held a party for the unveiling of a new mural in Williamsburg by street artist Shepard Fairey’s creative agency, Studio Number One. Like Fairey’s Hope poster for Obama, or his anti-Trump We the People prints, it bears a similarly bold, political message: “Trust the Earth,” lettered in green type above a humungous hand holding a cannabis leaf. The same image that’s now painted on the side of Mable’s Smokehouse on North 11th Street was projected on a screen at North Brooklyn Farms at a dinner party celebrating the campaign, which at first glance, seems unnecessary. Why does a multi-billion-dollar industry need a marketing campaign in the first place? And isn’t the sight of a big green mural promoting “Hemp for Natural Health” in Williamsburg preaching to the choir?

For many, this non-psychoactive compound derived from cannabis is already a go-to supplement for everything from pain relief to insomnia (a benefit I can personally attest to). You can find it in creams, lattes, sodas, salves, tinctures, gummies… but only 14% of Americans have tried it, and 35% have never heard of it. As the campaign moves to other cities and travels across Instagram, that could change—which could help CBD’s perception and legislative problems.

Hemp was legalized last year as part of the farm bill, but that primarily made it easier for farmers to grow it. CBD makers and sellers have other hoops to jump through. The payment processor Square, for instance, only opened up its system to a portion of CBD sellers this month, after years of refusing to, as many financial institutions have done because of the way that states and the federal government differ in their regulations on cannabis as a whole—both the non-psychoactive and the THC kind. There are signs of progress on the horizon, though. The House of Representatives just passed a bill that allows banks to work with state-legal marijuana businesses, and it will likely pass in the Senate, whose majority leader Mitch McConnell is a well-known booster of his state’s profitable hemp industry.

McConnell and other senators are also calling for the FDA to speed up its path toward regulating hemp products, so that responsible growers and sellers can benefit from labeling and marketing that allows consumers to identify which CBD brands to trust. Doing so could potentially avert a public health disaster like the vaping illnesses from unregulated THC oils.

But at the moment, no government agency seems to be on the same page when it comes to CBD regulation. Here in New York City, the health department just began a ban on food and beverages containing CBD on October 1, despite no signs that the compound can be toxic or intoxicating or addictive (especially when added to the millions of CBD lattes sold to date in NYC alone!)

Are you a restaurant, street vendor or store offering food or drink that contains CBD? As of Oct. 1, we are issuing violations subject to fines for CBD-containing food and drink. Embargoed products must be discarded or sent back to the supplier: https://t.co/Sxcjo4i5nW pic.twitter.com/2tmcCtD4rt

Given the scattershot prohibitions regarding hemp and cannabis in this country, the Stanley brothers’ art activation seems incredibly timely. Over a night of drinks and a four-course meal at North Brooklyn Farms, guests heard from Paige Figi, the mother of Charlotte Figi, a child who suffered from a severe form of epilepsy that no pharmaceuticals could stop. For anyone who knows the origin story of CBD’s popularity, it was like a celebrity sighting. But for those who might only be familiar with CBD because they’ve seen the tinctures on shelves or had a can of Recess, it was illuminating to hear her tell how Charlotte’s Web came to be, in person. 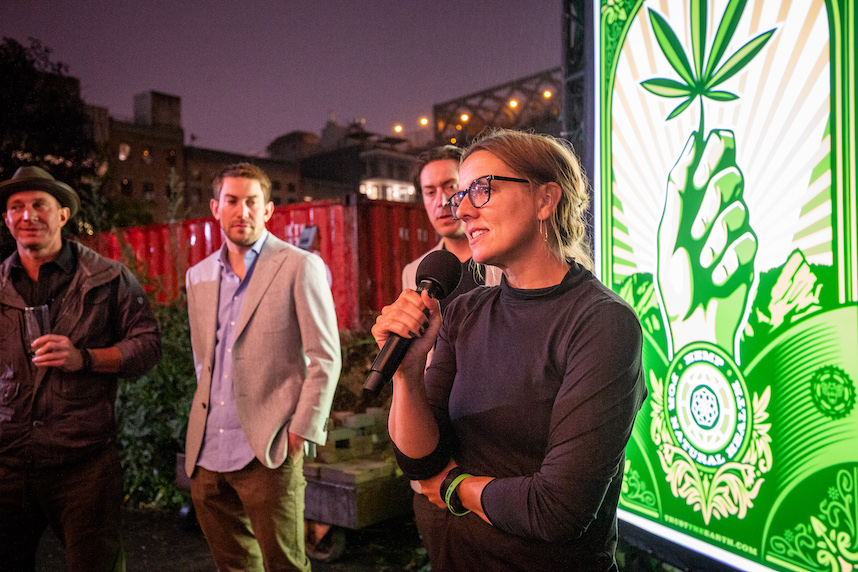 Paige Figi, relaying the story of her daughter Charlotte and the origins of Charlotte’s Web.

By sheer internet search luck, Paige learned of cannabidiol, a non-intoxicating compound in hemp that could help her daughter. She was connected with the Stanley Brothers, seven actual brothers of an 11-child family growing medical marijuana in Colorado, and experimenting with a low THC, high CBD strain that held therapeutic promise. She learned of it, and asked to use it on her daughter. Immediately it stopped Charlotte from seizing multiple times a day to having no seizures at all. That was in 2012. Last year, the FDA approved a drug, Epidiolex, for children with epilepsy that contains a chemical form of CBD, but has yet to recognize the natural form as a treatment, despite legions of families who have benefitted from it, or who might not be able to afford a pharmaceutical that costs $32,500 per patient, per year.

Another mother, Heather Jackson, whose son Zaki’s epilepsy was also successfully treated with the Stanley brothers’ hemp products, spoke later in the evening, and described how her experience inspired her to create a non-profit, Realm of Caring, that aids research into cannabis and hemp therapies by collecting data and holding fundraisers so scientists can conduct clinical studies. 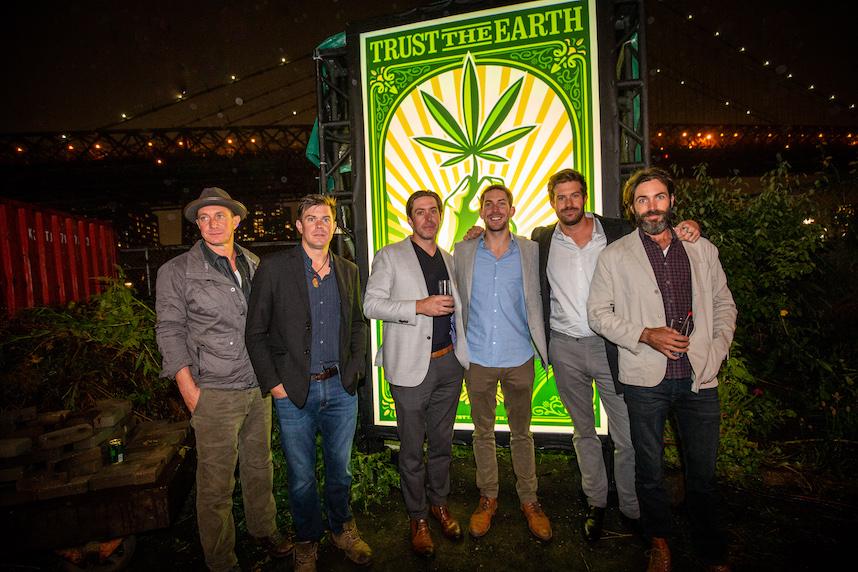 Six of the seven Stanley brothers, creators of the country’s biggest CBD brand, Charlotte’s Web, at the launch party for their Trust the Earth campaign.

Perhaps Charlotte’s Web could have taken a slow, FDA-approved route to treat only childhood epilepsy, but if it had, the country might not have woken up to the fact that many other people can benefit from CBD. It’s certainly helped the cannabis cause too, by creating more awareness of the ways in which our nearly century-long prohibition has hindered medical research and an entire industry’s growth. Their “Trust the Earth” campaign can only open more doors.