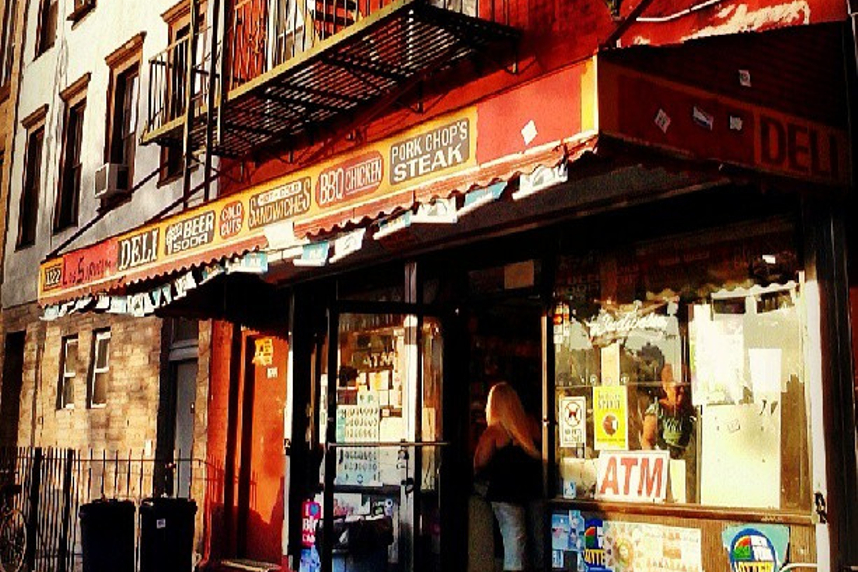 The place I miss and love the most about NYC is a dying breed. The corner bodega.

Now I’m not talking about the fancy ones with six different types of organic chocolate or an endless supply of organic beer, I mean the quintessential store on high traffic corners that for me made this city what it was. With names like Te Amo (I love you) and Superior Markets, these little family-owned meccas were the one neighborhood fixture you could count on—when everything around you was changing.

Children crave stability. They like to know when they will eat, when they will go to bed, they like to have some consistency in their lives. My upbringing wasn’t so stable. I was a latchkey kid in a seemingly beautiful neighborhood but little about it was safe or beautiful. If I played in the schoolyard I was often bullied; if I walked home alone, I risked being mugged. Boys who wore nice sneakers might find themselves running home in their socks when their shoes were added to the needless collection of stolen sneakers thrown up on telephone wires for display.

I didn’t like walking around my neighborhood, but the one exception, the one place I went every single day was my corner bodega. It was in some ways my second home.

The country has cute little general stores, the suburbs wide pristine aisles in their supermarket chains, NYC has the bodega. Its name is a derivative of the Spanish word for grocery store, and as I would later learn in Argentina, it’s also the name for a wine shop, but for this native New Yorker it meant both. The smallest of stores with the biggest of variety and the place I would get my alcohol as well, before the crackdowns anyway.

Don’t get me wrong, I like an artisan pickle and pho shop as much as the next person, but I yearn for the days before all these gourmet selections. I yearn for the original Bodega.

I grew up in the Ditmas Park section of Brooklyn, large Victorian homes and big apartment complexes that took up full corners—a suburban paradise with an urban flair, but still there was little to do. Aside from the occasional trip to the library or a weekend bowling match my days were spent at home watching TV or visiting a friend, the time in between when I wanted something, there were no parents who were going to give me a ride anywhere my only hope was to go to the corner and grab something.

I think I spent every single day of my life at the corner Bodega. I still remember when they remodeled it—and added bright red and blue letters changing its name to Superior Markets and to me it was. Where else could I get all my needs me in less than 500 feet? If we needed milk no worries, diet soda, check. For me it was a bologna sandwich on a roll, a kit kat bar and when I was older a Bartle’s and James wine cooler in a brown paper bag and a pack of Benson and Hedges Deluxe Ultra-Light Menthols, and they’d give me matches to boot.

The men behind the counter were always friendly and were the one constant in a slowly gentrifying neighborhood. They’d smile and ask how my day was and sometimes throw in small pieces of candy just to be nice. The rest of Coney Island was not as welcoming, men would often hiss when I walked by—but here on this mega corner I could always find home.

I remember a bigger deli opened up nearby and how excited I was at all their choices. I nervously went in. They had shiny new meat slicers and rows of cold cuts and salads and fresh bagel and rolls. I thought I was in heaven. I stood at the counter for quite a while deciding what to order and noticed the meatball section. This could be good I thought.

I waited my turn and then the big man behind the counter spoke.

I was only a kid and didn’t really understand the sandwich system well but bravely spoke.

“Do you have meatball subs?” I said. Mouthwatering.

“Well, you see meatballs and you see bread, so duh, of course we do.”

And there my face turned a bright shade of marinara.

The other big guys behind that counter laughed and I had to wait there like an idiot for my tainted sandwich.

The guys at the bodega would never do that.

As the years progressed, I learned how to order better but still every day I would find my way to the Superior Market. It was like showering or brushing my teeth it was just a part of my daily routine. If friends were coming over, I could run to the corner and grab some cold cuts. If I needed gum. Bodega. If I wanted a Chipwich at 2 in the morning, bodega. 24 hours and always welcoming.

Years after my family moved and I left New York City I found myself back in Brooklyn. Missing the sidewalks and convenience only the Big Apple could offer. I had only been back a few months when I found myself wandering on Montague Street. How I yearned for something familiar. And that’s when I saw him.

An old man kept turning around and smiling at me. His starring made me uncomfortable. He came closer and my body stiffened. He finally spoke.

“Where do you live?” the stranger asked.

“But where, are you not from Ditmas?” he said looking into my eyes.

And that’s when I knew it. He was the bodega owner of Superior Markets. His hair now gray and his face still warm.

“I remember you, I watched you grow up,” he said proudly.

I instinctively grabbed his hand and held it—nearly in tears.

One thing in my life had remained constant.

The bodegas of today are a little different, they have cats and are either completely renovated or without much of a selection and you wonder how their barren shelves survive. But they are still standing and still offer so much to this city.

I have a new corner store, the people are equally friendly and the selection, dare I say Superior to Superior Markets. They recently remodeled the outside when it was used as a backdrop for a movie. It has freshly painted signs engraved on glass and a pinstriped awning. And I like the way it looks. But most of all I like that any time of day when I need a familiar face or a carton of milk, I can go to my corner Bodega and get exactly what I need.